Neil Young performs at the BottleRock Napa Valley Music Festival at Napa Valley Expo in Napa, Calif., on May 25, 2019.

The move makes the longtime musician one of the most popular musical artists not to appear on the music streaming service. 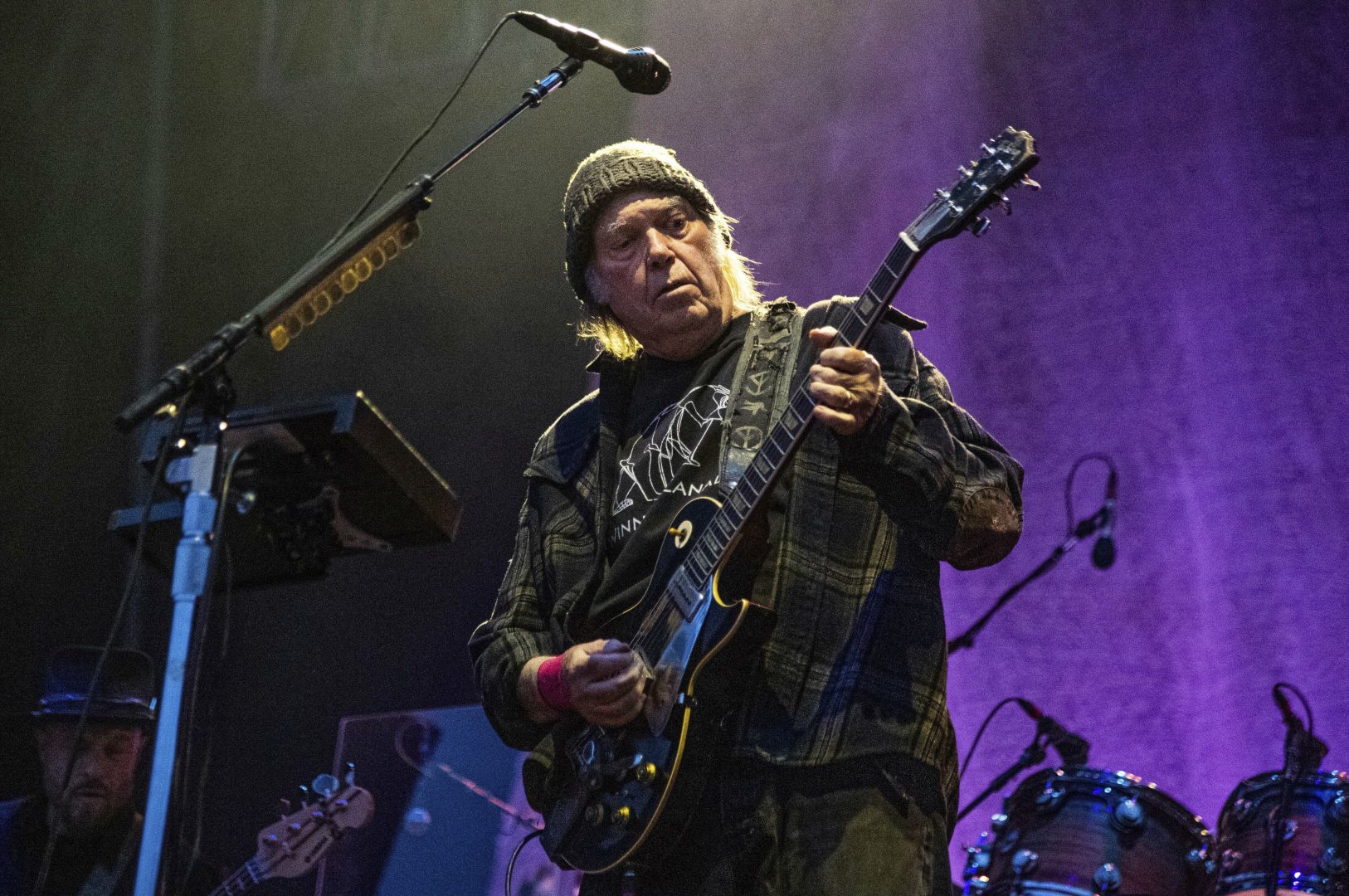 Neil Young performs at the BottleRock Napa Valley Music Festival at Napa Valley Expo in Napa, Calif., on May 25, 2019.

(Washington) — Spotify is in the process of removing famed singer-songwriter Neil Young’s recordings from its streaming platform, the company announced Wednesday.

On Monday, Young had briefly posted an open letter on his own website, asking his management and record label to remove his music from the streaming giant, as a protest against the platform’s distribution of podcaster Joe Rogan. Rogan has been widely criticized for spreading misinformation about coronavirus vaccines on his podcast, which is now distributed exclusively on Spotify.

According to Rolling Stone, Young’s letter, which was addressed to his manager and an executive at Warner Music Group, read in part: “I am doing this because Spotify is spreading fake information about vaccines – potentially causing death to those who believe the disinformation being spread by them … They can have Rogan or Young. Not both.” The letter was quickly removed from Young’s website.

Spotify’s scrubbing of Young from its service was first reported on Wednesday afternoon by The Wall Street Journal. His removal from the streaming platform makes him one of the most popular musical artists not to appear on Spotify, where his songs have garnered hundreds of millions of streams.

As of Wednesday evening, most of Young’s material had been removed from Spotify. In a statement sent to NPR Wednesday afternoon, a Spotify spokesperson wrote: “We want all the world’s music and audio content to be available to Spotify users. With that comes great responsibility in balancing both safety for listeners and freedom for creators. We have detailed content policies in place and we’ve removed over 20,000 podcast episodes related to COVID since the start of the pandemic. We regret Neil’s decision to remove his music from Spotify, but hope to welcome him back soon.” 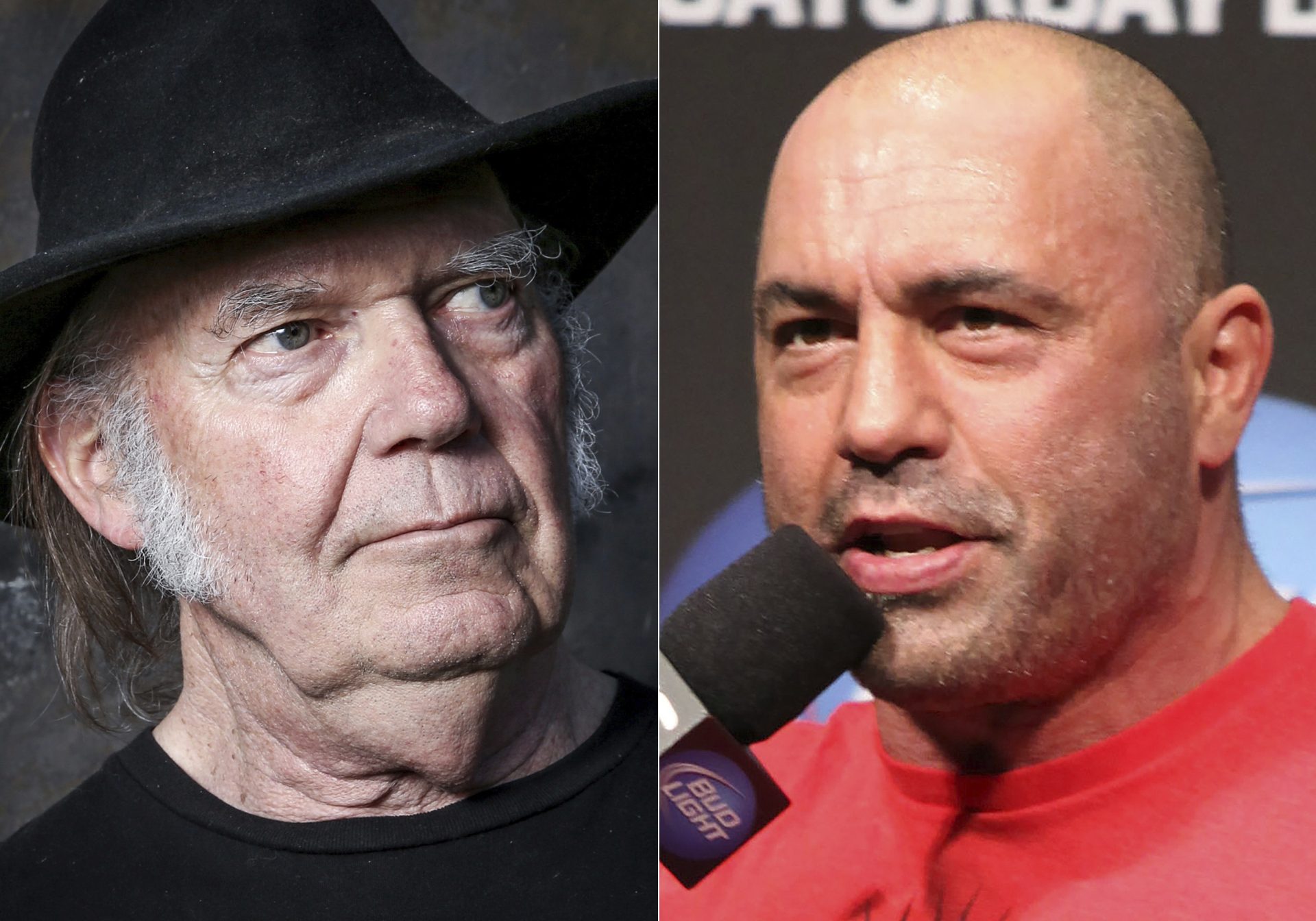 This combination photo shows Neil Young in Calabasas, Calif., on May 18, 2016, left, and UFC announcer and podcaster Joe Rogan before a UFC on FOX 5 event in Seattle on Dec. 7, 2012. Young fired off a public missive to his management on Monday, Jan. 24, 2022, demanding that they remove his music from the popular streaming service Spotify in protest over Rogan’s popular podcast spreading misinformation about COVID-19. But by Tuesday afternoon, his letter had been removed from his website, “Heart of Gold” and other hits were still streaming.

Earlier this month, Young sold 50% of his songwriting copyrights to the U.K. investment company Hipgnosis Songs, which was founded by music industry veteran Merck Mercuriadis. Most of the recordings in Young’s discography are distributed by Warner Music Group, though a handful are distributed by Universal Music Group.

As of Wednesday evening, no other prominent musicians had followed in Young’s footsteps. Many musical artists are unhappy with Spotify for a variety of reasons — not least of which is that Spotify pays what many musicians believe is an infamously stingy royalty rate.

Still, it is the most popular audio streaming service in the world. According to the company, it has 381 million users worldwide in more than 184 countries and markets. Musicians want to meet their fans where they are, and not every artist or creator is willing to go to the lengths that Young has, in terms of putting their money where there mouths are.

Moreover, Joe Rogan’s podcast is extremely valuable to Spotify: it has been the most popular one globally offered on the service for the last two years, and the exclusive distribution deal he signed with Spotify in 2020 is worth a reported $100 million.

Spotify’s CEO, Daniel Ek, has said that his company isn’t dictating what creators can say on its platform. In an interview with Axios last year, he said that Spotify doesn’t bear editorial responsibility for Joe Rogan. In fact, Ek compared Rogan to “really well-paid rappers” on Spotify, adding: “We don’t dictate what they’re putting in their songs, either.”

Editor’s note: Spotify is one of the funders of NPR and the network’s programs are available on the streaming service.