First responders know how to care for each other, to be sure, like these folks mourning fallen Mount Holly Springs firefighter Jerome Guise in 2020. But sometimes, the strains of the job require professional help. A new Cumberland County program aims to provide it. March 10, 2020.

The new program is an outgrowth of a volunteer-based Critical Incident Stress Management Team begun in 2018. 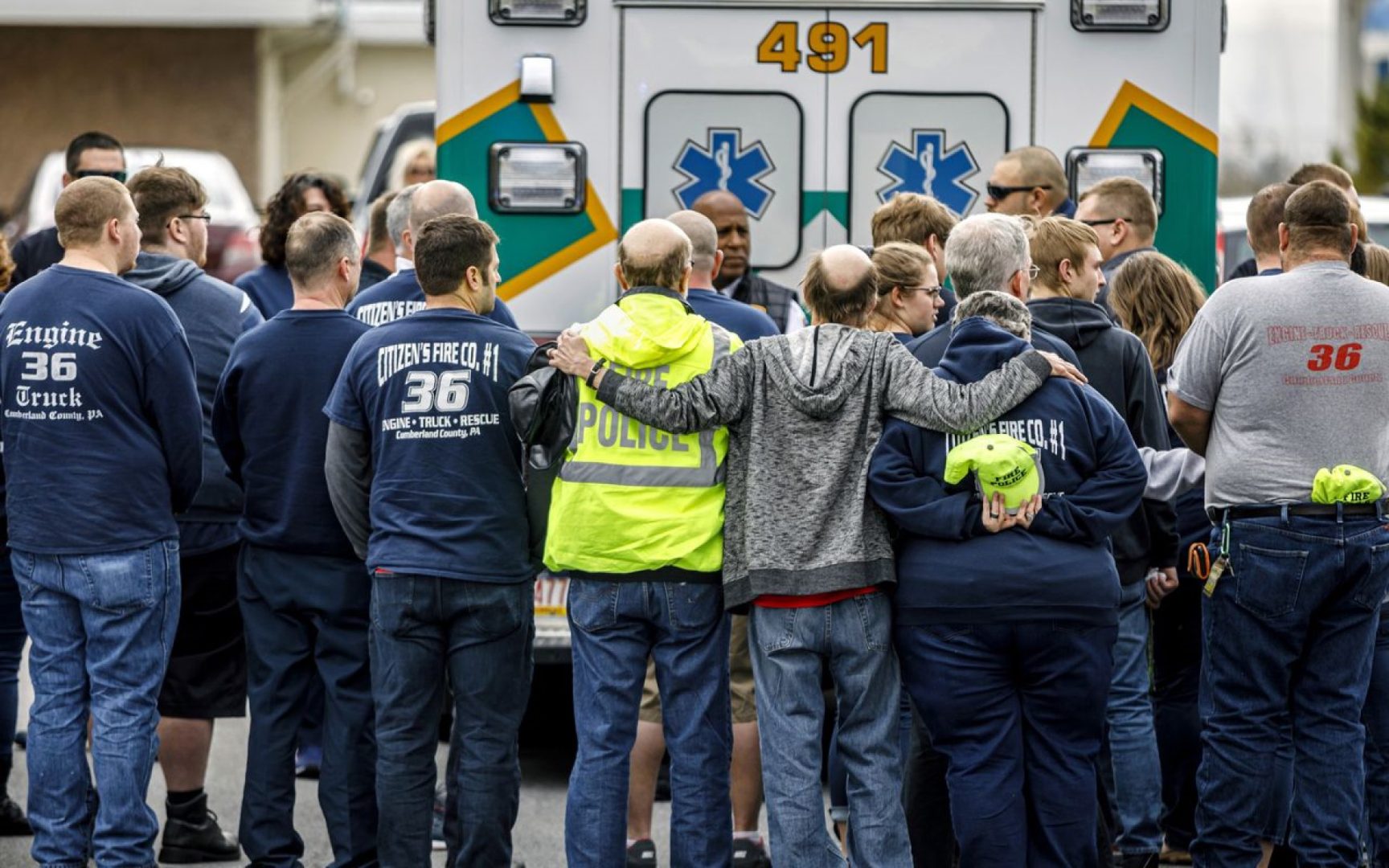 First responders know how to care for each other, to be sure, like these folks mourning fallen Mount Holly Springs firefighter Jerome Guise in 2020. But sometimes, the strains of the job require professional help. A new Cumberland County program aims to provide it. March 10, 2020.

Being a first responder is not for the faint of heart. Never has been.

Those who serve in this capacity are often dealing with a traumatic event. Sometimes, they’re forced to deal with the aftermath of some of the worst actions we human beings can take.

But in Cumberland County the work may just have gotten, if not exactly kinder and gentler, maybe a little more empathetic.

That’s due to the First Responder Assistance Network, a new county-funded program intended to provide occupation-specific, professional counseling and therapy to all police officers, firefighters, emergency medical technicians and dispatch center workers who – after a particularly bad situation, or an accumulation of bad situations – signal that they need someone to lean on for a bit.

The new program is an outgrowth of a volunteer-based Critical Incident Stress Management Team begun in 2018.

There, peer group members have been trained in active listening and trying to help their colleagues work through their struggles by relating to them. The new assistance network is an extension of that for those who need professional help, said 911 Supervisor and CISM Team manager Michael Snyder.

The Cumberland program, which is eligible on a free and confidential basis to all volunteer or professional first responders, is being offered through State College-based first responder counseling service “On The Job And Off,” which has specifically educated counselors on the ins and out of the emergency services practices.

Like, for example what does it mean to have someone die in your arms, full of fear? Or to discover the bodies of small children at a fire scene? What about when a colleague is killed in the line of duty?

It’s pretty evident that the toll these things take is real.

At Tuesday’s rollout, attended by police chiefs, EMTs, fire chiefs and others, the group was asked how many of them knew a colleague who had left the field primarily because they had seen enough of this kind of trauma, and found themselves unable or unwilling to put themselves in the position of having to process any more.

Almost everyone present raised their hand.

As a dispatcher, Snyder explained, his job is “kind of like watching a TV show where you only get to watch five minutes in the middle. You don’t really know what led up to this point, and you often don’t find out what happens at the end. But you’re very involved in the middle portion, and sometimes our brains don’t like that type of inter-action.

“We like for things to make sense, and if you don’t have something that makes sense sometimes you try to fill in the blanks: ‘Why did this happen?’ What could I do different?’ And those types of situations that occur day after day, week after week, month after month, can be very difficult for our staff to deal with… They provide stress that we really need to help them manage.”

But it’s an issue that hasn’t received a lot of direct attention until very recently.

“When I became an EMT in 2008, I think there was one paragraph in our textbook that was like this thick on stress. And that was it,” said Ali Rothrock, CEO and lead instructor at On The Job And Off. “We are so good at showing up and doing what we have to do on every single call. We can tell you all the equipment we carry. How to take it apart, clean it, put it back together…. But the training ends there.”

The First Responders Assistance Program provides support that could touch on any variety of problems, including stress, depression, anxiety, grief, eating disorders, gambling, substance use, and more. It also Includes crisis intervention and group debriefings for departments and clear paths to in-patient mental health or substance use treatment.

The county has entered into a five-year contract for services with Rothrock’s firm that provides 300 hours of clinical service at a base cost of $49,320; additional services would be charged on an hourly rate as needed.

Participating first responders will be referred into the program on a case-by-case basis through the existing peer-to-peer counseling program.

Snyder praised the county commissioners for agreeing to this enhancement of the existing program, which he said is a huge benefit in a county as diverse as Cumberland.

County Public Safety Director Robert Shively Jr. said he’s hopeful the new service will pay dividends for all county residents by keeping more first responders in the field and at their best.

“I’m really hoping that it helps with retention… and trying again to protect our current responders and do what we can to make sure they don’t burn out and lose them through calls,” he said.

“All the agencies are having difficulty with labor just like most businesses these days. So, things that we can do to retain the people that are already on board and already trained and already know their communities are very, very worthwhile and very cost-effective.”

Free N95 masks are arriving at pharmacies and grocery stores. Here's how to get yours