Philadelphia Flyers' Keith Yandle, left, and Dallas Stars' Luke Glendening battle along the boards during the first period of an NHL hockey game, Monday, Jan. 24, 2022, in Philadelphia. Yandle tied the NHL record for consecutive games played with 964 on Monday.

The defenseman waved to the crowd from the bench after his shift helped the defenseman tie retired center Doug Jarvis atop the NHL’s list. 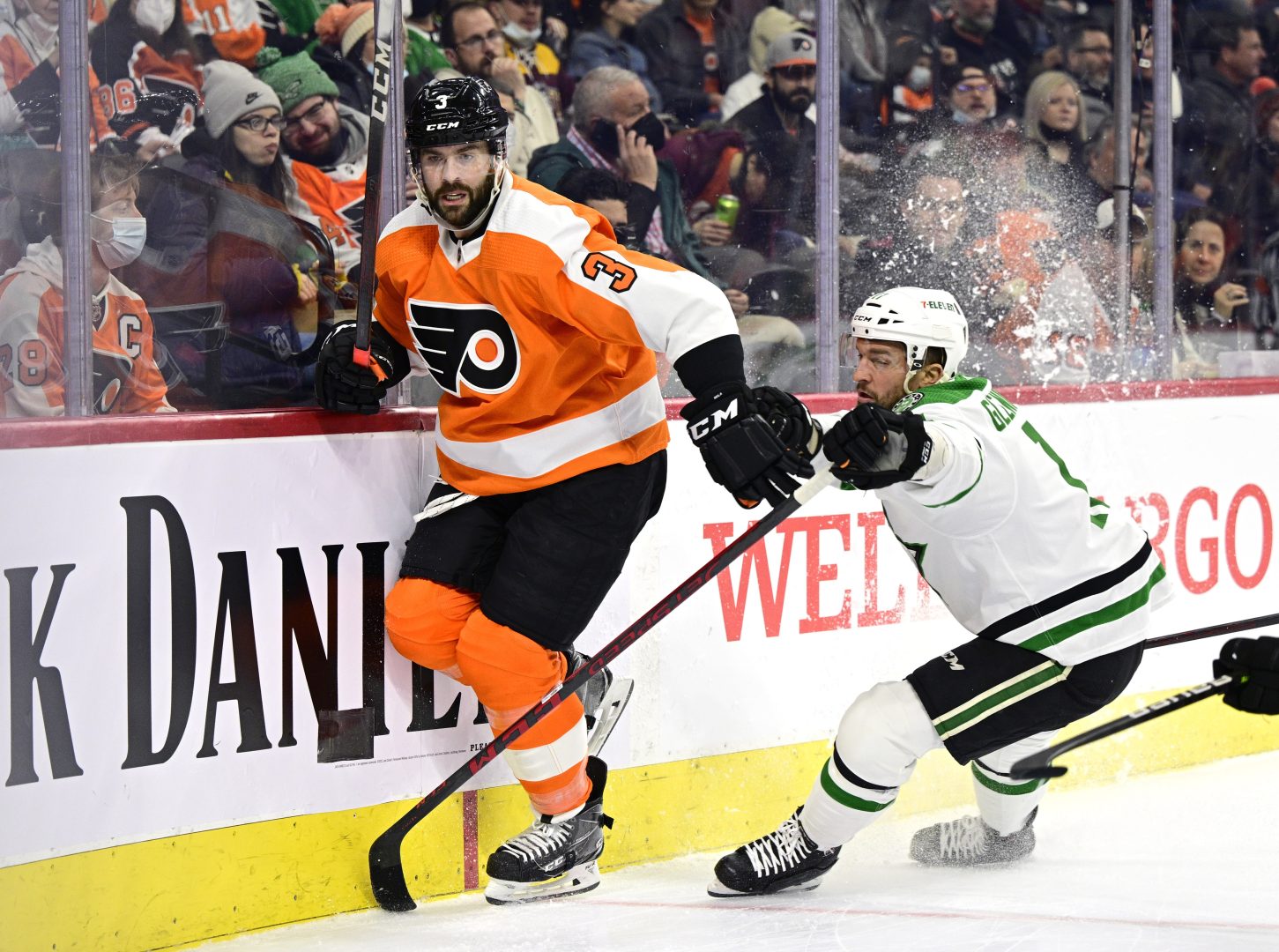 Philadelphia Flyers' Keith Yandle, left, and Dallas Stars' Luke Glendening battle along the boards during the first period of an NHL hockey game, Monday, Jan. 24, 2022, in Philadelphia. Yandle tied the NHL record for consecutive games played with 964 on Monday.

(Philadelphia) — Keith Yandle’s streak earned him a standing ovation, stick taps from his Flyers’ teammates and a slice of NHL history.

As for the Flyers’ streak? Their ignominious run got them booed of the ice — fed-up fans showing no love for anything except for the NHL’s Iron Man.

Yandle tied the NHL record for consecutive games played with 964 and Philadelphia tied a franchise record with its 12th straight winless game, losing 3-1 to the Dallas Stars on Monday night.

The Flyers have lost all 12 games over that span, matching a mark for futility set during the 1998-99 season when they lost eight games and tied four over a 12-game stretch. There are no ties to save them from this indignity.

The Flyers can hit their all-time worst streak — and Yandle can take his spot in history — on the road Tuesday against the New York Islanders.

For the Flyers, losing is the new normal.

Yandle waved to the crowd from the bench after his shift helped the defenseman tie retired center Doug Jarvis atop the NHL’s list.

“It wasn’t really something I expected. I just kind of never really thought about it,” Yandle said. “I saw the guys standing for me, cheering. All the fans. It definitely meant a lot.” 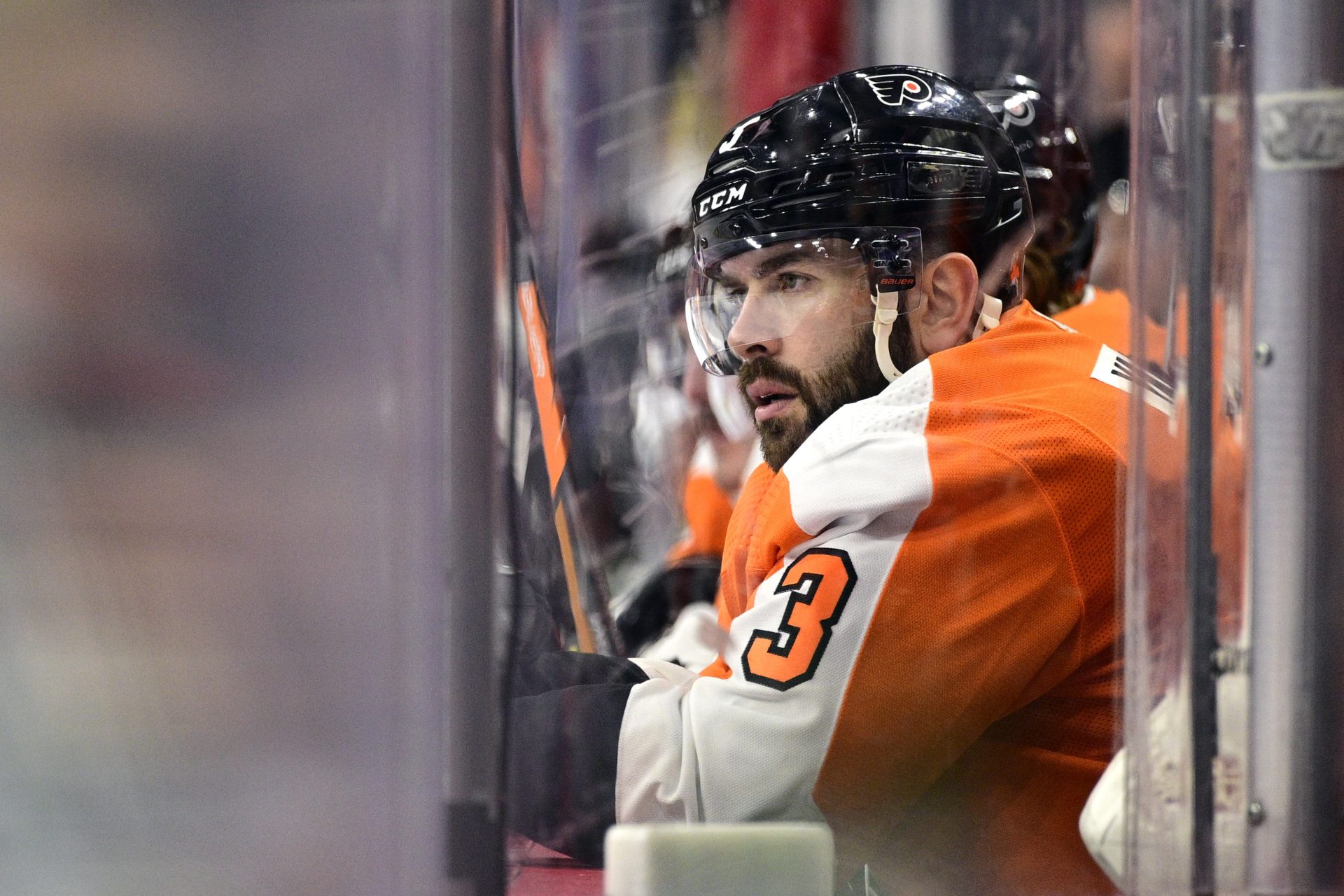 Philadelphia Flyers’ Keith Yandle looks on from the bench during the first period of an NHL hockey game against the Dallas Stars, Monday, Jan. 24, 2022, in Philadelphia. Yandle tied the NHL record for consecutive games played with 964 on Monday.

Jacob Peterson scored the go-ahead goal with 3:25 left and Joe Pavelski added an empty-netter to seal the win.

“Huge. Jacob is sneaky good,” Stars coach Rick Bowness said. “He hangs onto the puck and he tries to make plays. He doesn’t panic with it. That’s one thing we noticed from the first day of camp, the kid has good hockey sense.”

The 35-year-old Yandle started his streak March 26, 2009, with Phoenix, and he has played 1,074 games with the Coyotes, New York Rangers and Florida Panthers.

A three-time All-Star, Yandle is in his first season with the Flyers and set the mark when he hit the ice minutes into the game for his first shift.

“It’s an incredible accomplishment,” Flyers interim coach Mike Yeo said. “No. 1, you have to love the game, you have to battle through sickness, injuries. A level of professionalism to come the rink every day and be ready to go. And he’s a phenomenal teammate and I thought he played a hell of a game tonight.”

Jarvis, a senior adviser for the Vancouver Canucks, said Monday he would call Yandle and congratulate him on the streak.

“I just commend him. I think the streak is a real tribute to his character, his commitment, his love of the game to be in there every night,” Jarvis said.

Arizona’s Phil Kessel is third on the list at 940 straight games and could also pass Jarvis before the end of the season.

The Flyers already became the first team in NHL history to suffer two 10-game losing streaks within the first 40 games of the season.

Roope Hintz beat Carter Hart on a breakaway for a 1-0 lead in the first and the Stars gave the Flyers a rare break in the second period. Flyers defenseman Ivan Provorov’s shot from the boards knocked off John Klingberg’s skate and into the net for the tying goal.

“It’s hard on anybody when you lose 12 in a row, no matter what sport you’re playing,” Hart said. “I think there are a lot of things in our game tonight that are strides in the right direction.”

The Flyers could only pack a bar on the concourse for a pregame Grateful Dead tribute band concert, and the ones that stuck around only briefly got loud — to cheer Yandle — until the final horn when they booed the team off the ice.

“They want to see us win,” Hart said. “They’re passionate about all their sports, about the Flyers. We appreciate their support. When we’re winning, they’re awesome.”

Yandle’s tenure with the Panthers ended with one giant asterisk in his Iron Man status: Yandle had played in 57 straight playoff games, but was a healthy scratch in three of Florida’s playoff games last season.

Flyers: Yandle goes for the record against the Islanders.