US Senator Kyrsten Sinema (D-AZ) speaks during a signing ceremony for H.R. 3684, the Infrastructure Investment and Jobs Act on the South Lawn of the White House in Washington, DC on November 15, 2021. (Photo by MANDEL NGAN / AFP) (Photo by MANDEL NGAN/AFP via Getty Images)

Arizona Democrats have censured Kyrsten Sinema over her pro-filibuster vote 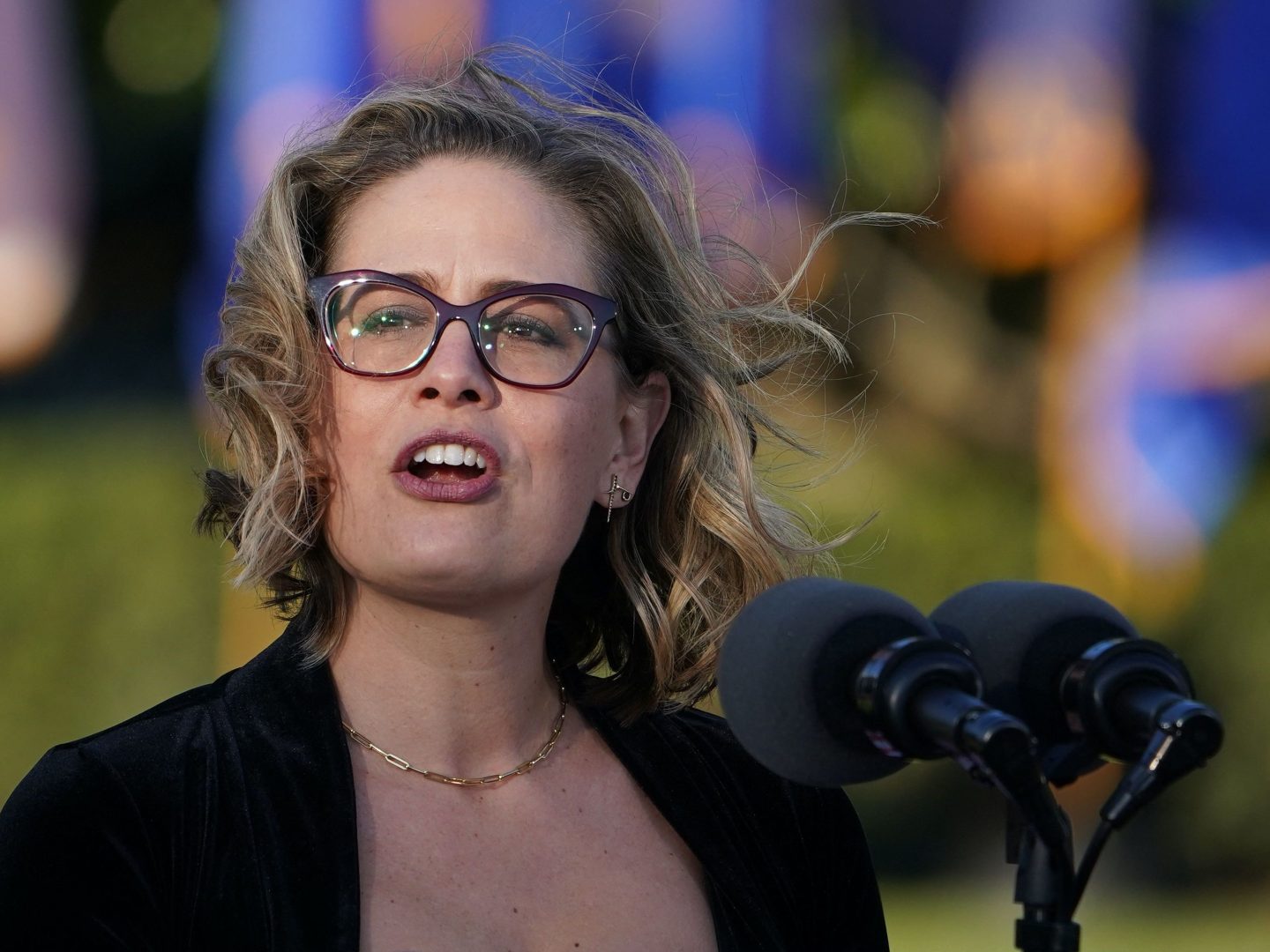 US Senator Kyrsten Sinema (D-AZ) speaks during a signing ceremony for H.R. 3684, the Infrastructure Investment and Jobs Act on the South Lawn of the White House in Washington, DC on November 15, 2021. (Photo by MANDEL NGAN / AFP) (Photo by MANDEL NGAN/AFP via Getty Images)

(Phoenix) — Arizona’s Democratic Party is rebuking one of its own. Its executive board voted on Saturday to censure Sen. Kyrsten Sinema over her opposition to changing the filibuster. By opposing the change, Sinema, along with West Virginia Sen. Joe Manchin and all Senate Republicans, prevented Senate Democrats from advancing major voting rights legislation earlier this week.

ADP Chair Raquel Terán said in a statement that while the party appreciates Sinema’s leadership in passing the American Rescue Plan and bipartisan infrastructure law, the “ramifications of failing to pass federal legislation that protects [constituents’] right to vote are too large and far-reaching.”

“While we take no pleasure in this announcement, the ADP Executive Board has decided to formally censure Senator Sinema as a result of her failure to do whatever it takes to ensure the health of our democracy,” she added.

The censure has no practical effect in itself.

Sinema has publicly supported the voting rights bills and voted for them on Wednesday. But she has long opposed eliminating the filibuster, characterizing the proposed rule change in a Thursday statement as one “that would deepen our divisions and risk repeated radical reversals in federal policy, cementing uncertainty and further eroding confidence in our government.”

When asked about the censure vote, Sinema’s office pointed to her bipartisan record.

“During three terms in the U.S. House, and now in the Senate, Kyrsten has always promised Arizonans she would be an independent voice for the state — not for either political party,” her spokesperson said in a statement emailed to NPR. “She’s delivered for Arizonans and has always been honest about where she stands.”

Sinema is the first Arizona Democrat elected to the Senate in 30 years. She has been called an unapologetic moderate. And along with Joe Manchin, she’s come to wield outsize power in an evenly divided Senate.

President Biden and other Democratic leaders had called on the Senate to alter filibuster rules in order to pass the voting rights bills, which they say would make it easier for all Americans to vote and reverse Republican-led states’ efforts to limit access to the ballot.

But Sinema and Manchin joined with Republicans to block the rule change, despite members of their party saying that democracy was at risk otherwise.

Their opposition earned praise from Republicans and criticism from Democrats, with Sinema losing support from progressive groups in recent days.

Arizona was among the states that passed new restrictive voting laws in 2021. Most notable in Arizona was a law that could remove tens of thousands of voters from the state’s early ballot mailing list.

Saturday’s vote comes almost exactly a year after the Arizona Republican Party made headlines for censuring three prominent Republicans, including former Sen. Jeff Flake and Cindy McCain, both of whom had been vocal in their opposition to former President Donald Trump.

Cindy McCain is the widow of the late Arizona Sen. John McCain, who was also censured by Arizona Republicans in 2014 over what they called his “liberal” voting record.