Protesters demonstrate calling for police accountability in the death of 8-year-old Fanta Bility who was shot outside a football game, at the Delaware County Courthouse in Media, Pa., Thursday, Jan. 13, 2022. Authorities say officers were responding to gunfire between two teens when Bility was fatally struck by a police bullet in 2021.

“What he has done is absolutely shameful."

(Media) — A hearing for a teenager charged with murder in the death of an 8-year-old girl hit by police gunfire was postponed Thursday in Delaware County as elected officials and activists stepped up their criticism of a prosecutor’s handling of the case so far.

Authorities say Angelo Ford, 16, got into an argument and exchanged gunfire with another teen outside a high school football game in Sharon Hill last August when police, returning fire, hit several bystanders in the crowd. The little girl, Fanta Bility, was fatally wounded by an errant police bullet.

Prosecutors asserted that Ford and the other teen, 19-year-old Hasein Strand, should be held criminally liable for Fanta’s death, charging them with first-degree murder and other offenses. Delaware County District Attorney Democrat Jack Stollsteimer, a first-term Democrat, has also convened a grand jury to investigate the police officers’ use of deadly force. The grand jury is still doing its work.

Activists, civil rights lawyers and others excoriated Stollsteimer on Thursday over what they called his disparate treatment of the two Black teenagers — who face charges that could put them away for life — and officers who fired their guns in an area crowded with people who were leaving the stadium at the end of the game.

“What he has done is absolutely shameful,” said Sean Damon, organizing director of Amistad Law Project in Philadelphia, asserting that Stollsteimer “is offering up these young people … as a distraction and a deflection away from holding the police accountable for what they did.”

Damon was among dozens of people at a “Justice for Fanta” rally outside the Delaware County Courthouse in Media. The group demanded that Stollsteimer drop the premeditated murder charges against Ford and Strand, name the police officers, and charge them in Fanta’s killing. 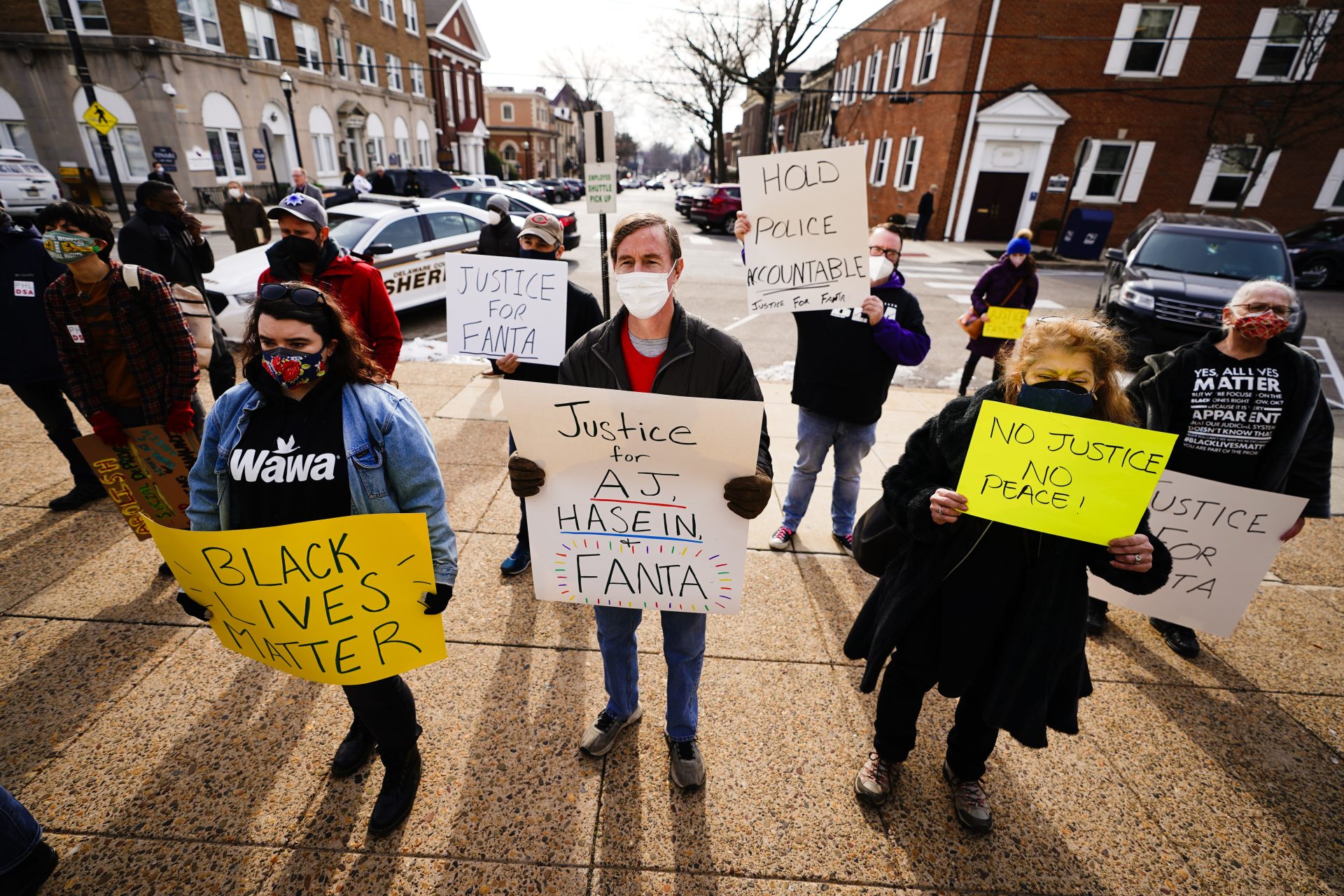 Protesters demonstrate calling for police accountability in the death of 8-year-old Fanta Bility who was shot outside a football game, at the Delaware County Courthouse in Media, Pa., Thursday, Jan. 13, 2022. Authorities say officers were responding to gunfire between two teens when Bility was fatally struck by a police bullet in 2021.

Stollsteimer’s office declined to comment on its handling of the case. The officers’ names “will not be released by this office unless they are charged with a crime,” said Margie McAboy, Stollsteimer’s spokesperson.

Attorney Bruce Castor, who has filed lawsuits on behalf of Fanta’s family and bystanders who were injured, said he had advised the family to withhold judgment of the DA’s performance, predicting major developments within days.

“I think that people in the community will feel dramatically different about how the case is being handled by this time next week,” Castor, who has also represented people who testified in front of the grand jury, said Thursday.

“It’s been my advice to the family to take a wait-and-see attitude for the short term,” said Castor, a former district attorney in neighboring Montgomery County. “I believe that the district attorney’s office is going to surprise a lot of people and makes decisions that are going to change the view that people have of the case.”

Stollsteimer, who was elected on a reform agenda, has faced mounting criticism by members of his own party since charging the teens in November.

At least two Democratic committees in Delaware County urged Stollsteimer to recuse himself from the case and turn it over to the state attorney general’s office, while five members of Philadelphia City Council released a statement Wednesday condemning what they called a “shocking miscarriage of justice.”

“The weight of this tragedy falls on the shoulders of the three officers who discharged their weapons that day. For the DA to attribute responsibility for this crime to these young Black men, while allowing the officers involved to get off scot-free, is indefensible,” their statement said.

Sharon Hill borough is a small community of about 5,700 residents less than 2 miles north of Philadelphia International Airport.