Stewart Rhodes, founder of the citizen militia group known as the Oath Keepers, center, speaks during a rally outside the White House in Washington, Sunday, June 25, 2017.

Stewart Rhodes, the founder and leader of the Oath Keepers, was charged in connection with the Jan. 6 attack on the U.S. Capitol. 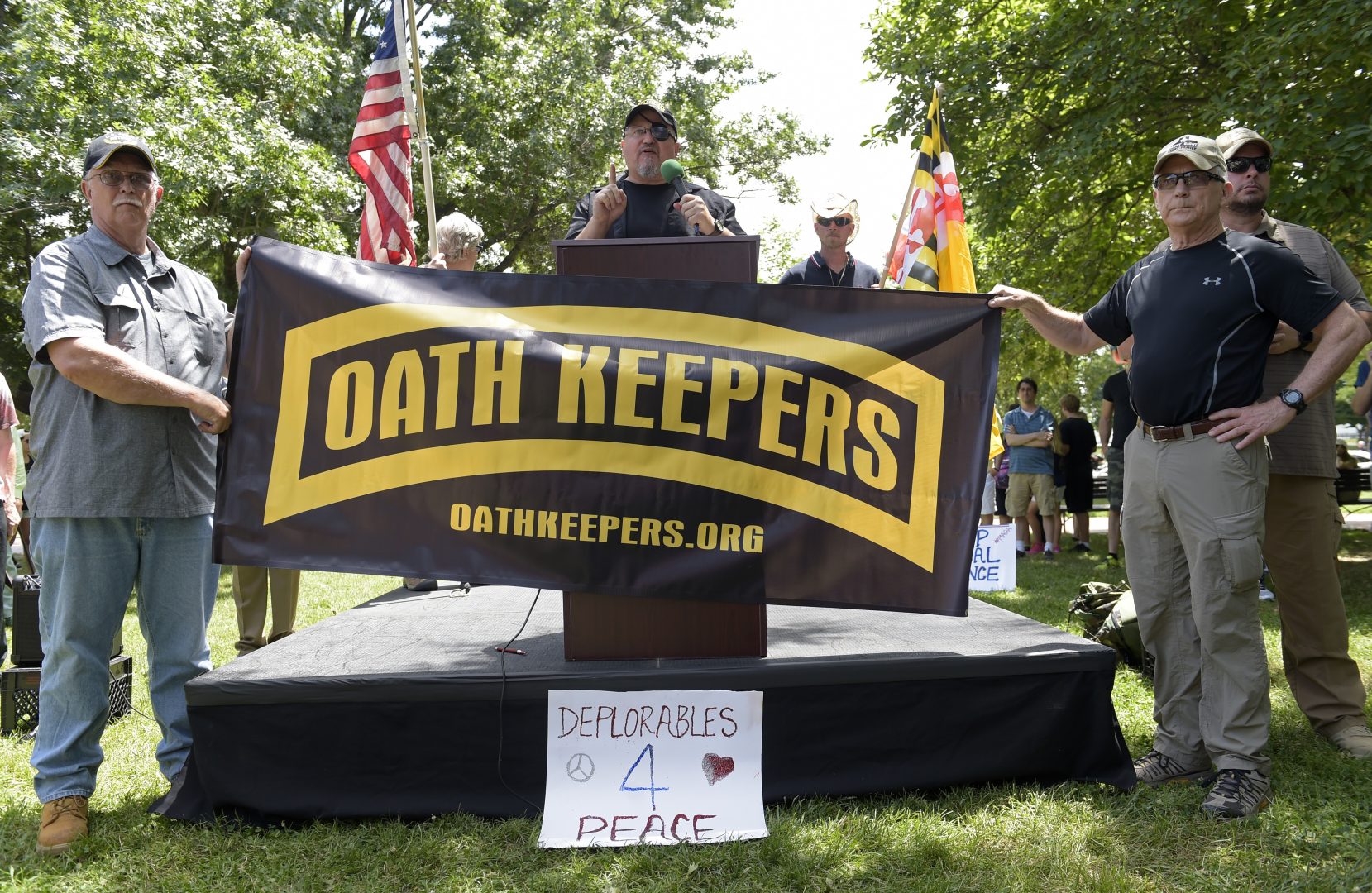 Stewart Rhodes, founder of the citizen militia group known as the Oath Keepers, center, speaks during a rally outside the White House in Washington, Sunday, June 25, 2017.

(Washington) — The Justice Department unsealed seditious conspiracy charges against the leader of the far-right Oath Keepers group and 10 other people on Thursday, alleging they plotted to disrupt the electoral process at the U.S. Capitol on Jan. 6 and endangered former Vice President Mike Pence.

Federal authorities arrested Oath Keepers leader Stewart Rhodes in Texas on Thursday morning and also took Edward Vallejo into custody in Arizona. The other nine people had already been accused of some crimes related to the siege on the Capitol last year.

The grand jury indictment in the District of Columbia is the most serious and sweeping case to emerge from the federal investigation into the Capitol riot and the first to include the seditious conspiracy charge, which carries a maximum of 20 years in prison.

Just last week Attorney General Merrick Garland described the outlines of the sprawling investigation and pledged, “the actions we have taken thus far will not be our last.”

The Justice Department said the Oath Keepers were determined to stop the lawful transfer of power, with two groups marching in military-style formations toward the Capitol that day and other personnel labeled “quick reaction forces” waiting outside D.C. to transport firearms and other weapons. Vallejo allegedly helped coordinate one of those quick-reaction teams.

The court papers said the defendants organized teams to use force and bring firearms to the Capitol, recruited members to participate and organized trainings, and brought paramilitary gear, knives, batons and radio equipment to Washington.

Rhodes communicated with other leaders on Jan. 6 using a chat group on the encrypted app Signal, according to court documents.

“Pence is doing nothing. As I predicted,” Rhodes typed to the group that day. “All I see Trump doing is complaining. I see no intent by him to do anything. So the Patriots are taking it into their own hands. They’ve had enough.”

Rhodes compared the Oath Keepers’ actions that day to “the founding generation” that tarred and feathered tax collectors and “dumped tea in water,” according to the court filings.

Authorities said the plotting continued even after the insurrection, which injured at least 140 law enforcement officers.

Five officers who reported for duty on Jan. 6 have since died.

What kind of mask should I wear?