An infant and three crew members survived the crash landing. 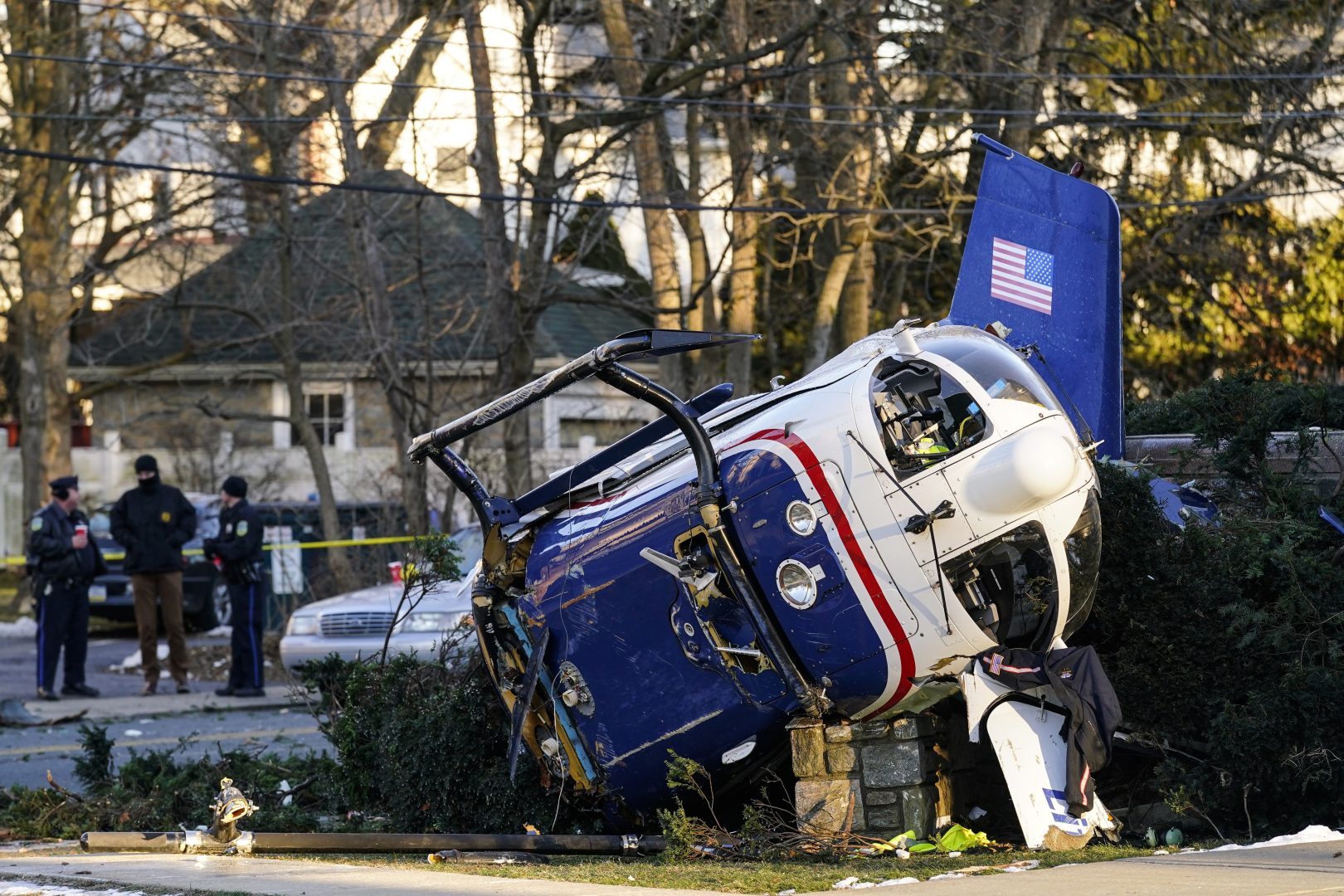 (Upper Darby) — A pilot crash-landed a medical helicopter Tuesday without loss of life in a residential area of suburban Philadelphia, somehow avoiding a web of power lines and buildings as the aircraft fluttered, hit the street and slid into bushes outside a church, authorities and witnesses said.

It was a “miracle” that none of the four people aboard, including an infant patient, suffered life-threatening injuries, Upper Darby Police Superintendent Timothy M. Bernhardt said.

Rescue crews rushed to the wreckage by the Drexel Hill United Methodist Church in Upper Darby at about 1 p.m. and helped get the pilot, two crew members and the infant out of the aircraft, Bernhardt said at a press conference.

The infant was taken to a hospital as authorities worked to notify the child’s family, Bernhardt said. 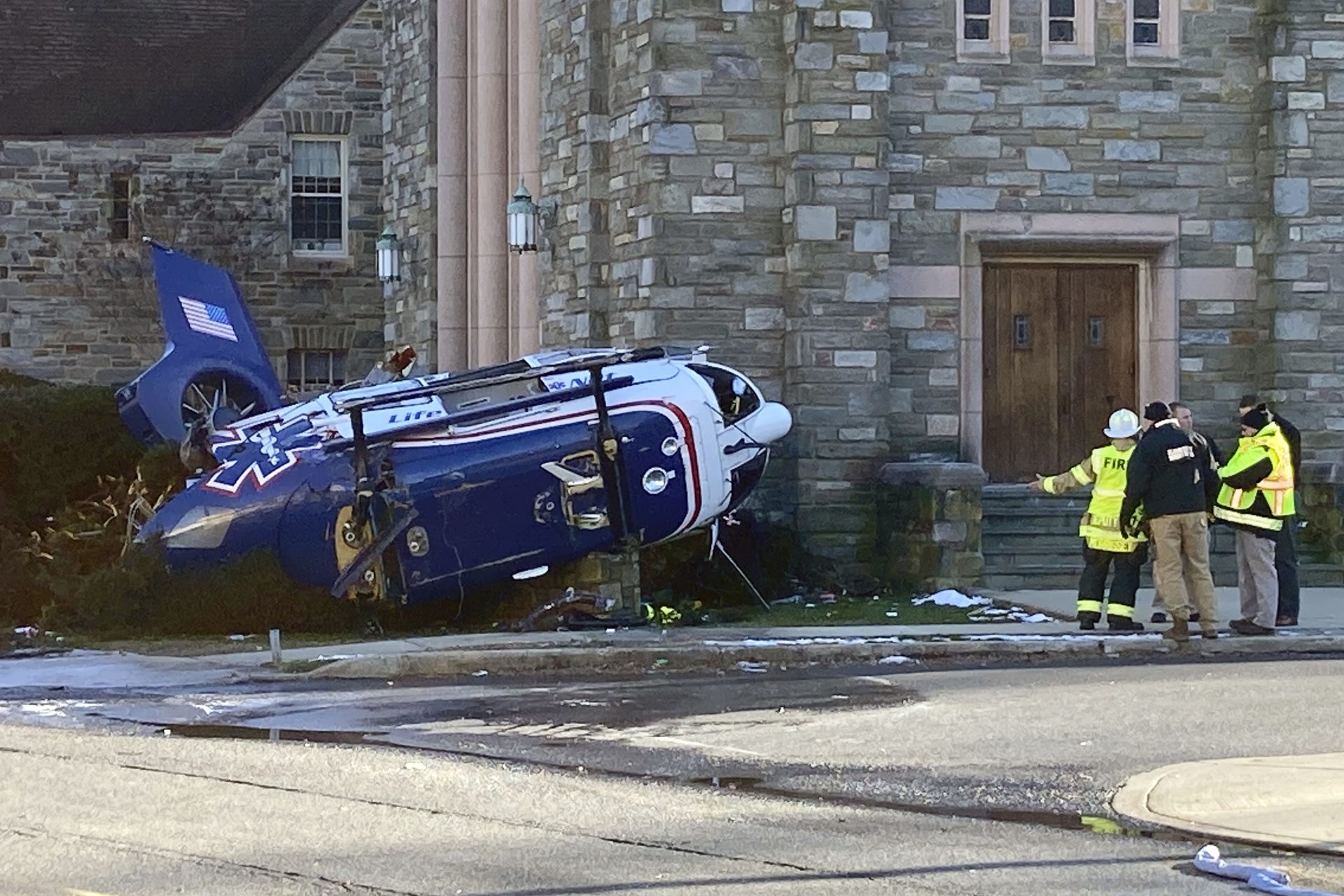 Firefighters from Upper Darby, Pa, stand near a medical helicopter that crashed next to a church in a residential area of suburban Philadelphia, Tuesday, Jan. 11, 2022, with four people on board including an infant. All are expected to survive, authorities said. (AP Photo/Claudia Lauer)

The aircraft had taken off from out of state. It’s believed to have encountered mechanical problems during the flight, said a Pennsylvania Emergency Management Agency spokesperson, citing reports from county officials.

At the crash site, a stop sign on the corner was cleaved into two and had apparently been hit by the helicopter when it came down. The aircraft was on its side in two pieces, just outside the stone church.

“It’s a miracle, it’s an absolute miracle, here what you see behind me,” Bernhardt said, adding that he’s eager to shake the pilot’s hand for getting the helicopter down the way they did.

A witness, Joshua James, said he was driving nearby with his wife and young son when he saw the tail of the helicopter swaying back and forth as it slid to a stop. He put his car in reverse.

Jerrell Saunders, 28, said he had been walking from his work in maintenance at an apartment building nearby when he saw the helicopter “just floating, like real low, like extremely low, like it could land on the building that I work at.”

He got in his car to go to the hardware store and the helicopter was going in the same direction. He said he saw it hit the ground in the middle of the road and slide across the ground until it crashed. 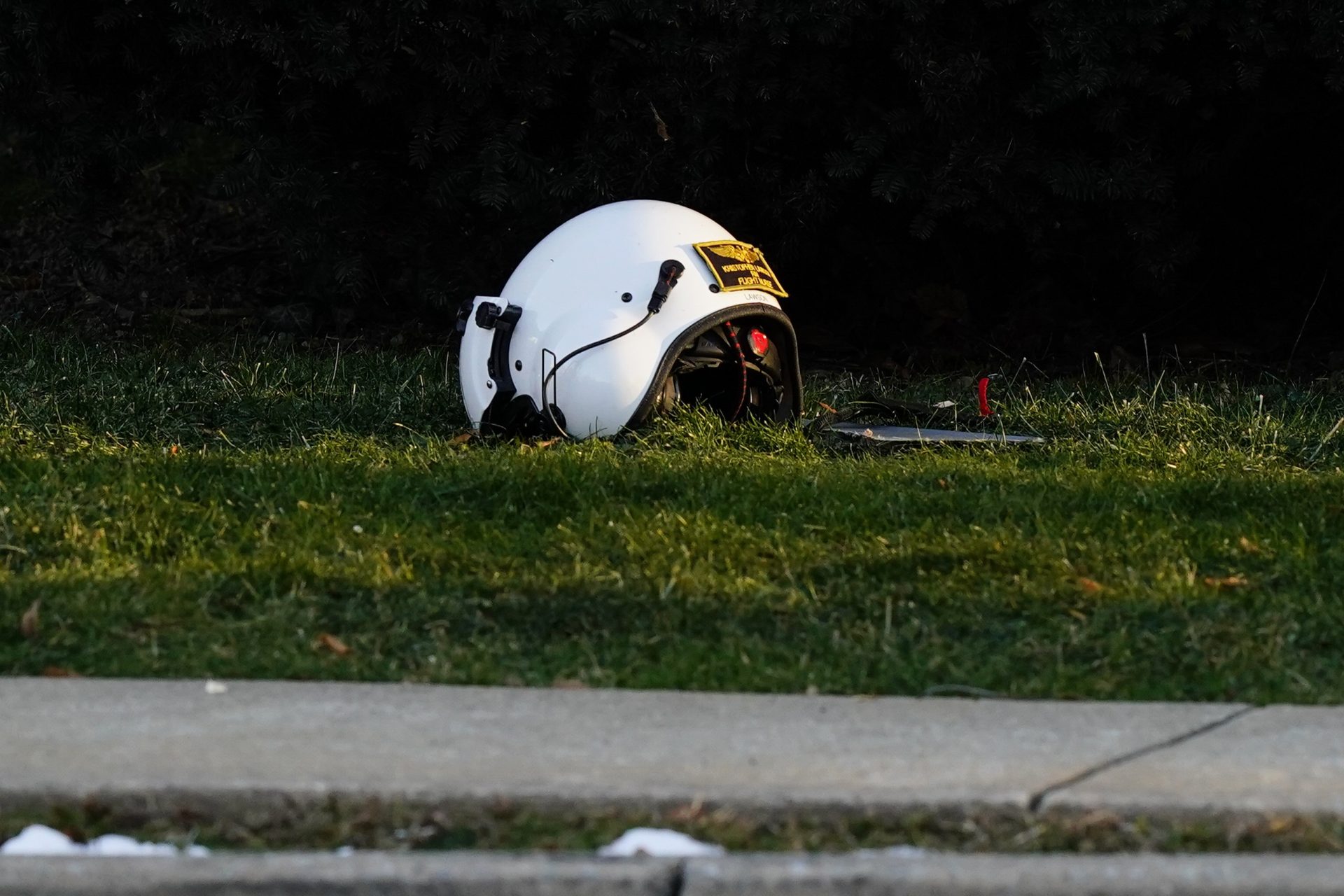 A helmet sits on the ground near the scene of a crashed medical helicopter in the Drexel Hill section of Upper Darby, Pa., on Tuesday, Jan. 11, 2022. Authorities and a witness say a pilot crash landed a medical helicopter without casualties in a residential area of suburban Philadelphia, miraculously avoiding a web of power lines and buildings as the aircraft fluttered, hit the street and slid into bushes outside a church.

“I guess the pilot tried to land in a safe area, because it took a bounce on the a ground and fell and, like, slid,” Saunders said.

The helicopter turned on its side and, as smoke was coming out, he saw people jumping out of the helicopter.

“I’m telling my grandkids about this one,” he said.

A fire official said the helicopter had about an hour’s worth of fuel left at the time of the crash, and crews took steps to keep leaking fuel from contaminating groundwater.

The Federal Aviation Administration said the aircraft was a Eurocopter EC135 medical helicopter and that the agency was investigating, along with the National Transportation Safety Board.

A spokesman for Air Methods, the air medical emergency transport service that owns the helicopter, said it was part of the LifeNet program based in Hagerstown, Maryland. Federal agencies were investigating.

“Our team will cooperate fully with their efforts to assess the cause of this unfortunate accident,” said Air Methods spokesman Doug Flanders.