Does this variant cause less severe disease than the variants that have come before it?

(Washington) — When it was discovered, omicron alarmed scientists.

The variant looked wildly different from earlier versions of the coronavirus — and it quickly became clear that these mutations gave omicron an uncanny ability to sidestep our vaccines and spread very rapidly.

But it has taken longer to untangle what, if anything, sets an omicron illness apart from that of its predecessors. And most of all, does this variant cause less severe disease than the variants that have come before it?

With infections at all-time highs in the U.S., the clinical picture is now coming together and starting to confirm what other countries have found — a typical case of omicron not only presents slightly differently but also likely carries a lower chance of getting seriously ill.

Scientists at Case Western Reserve University have preliminary evidence that the risk of being admitted to the hospital or the intensive care unit during the omicron surge in the U.S. is about half of the risk observed during the delta surge. And this reflects what doctors across the country are now seeing firsthand with their patients.

“This is a pretty different surge,” says Dr. Brendan Carr, chair of emergency medicine for the Mount Sinai Health System — where the emergency rooms are busier than ever but many of the COVID-19 patients are not sick enough to be admitted.

But as with any variant of SARS-CoV-2, your absolute risk depends on many factors, including whether you’re vaccinated and boosted, your age, your overall health and your economic situation.

“In the older age group, it’s still a nasty disease, even if it’s less [nasty] than the delta variant,” says Dr. Pamela Davis, who’s a pulmonologist at Case Western Reserve University and a senior author on the new study. “You don’t get off scot-free just because you happen to be infected in the time of omicron.”

“While omicron does appear to be less severe compared to delta, especially in those vaccinated, it does not mean it should be categorized as ‘mild,’ ” said the World Health Organization’s director-general, Tedros Adhanom Ghebreyesus, on Thursday. “Just like previous variants, omicron is hospitalizing people and it is killing people.”

Indeed, hospitalizations across the U.S. now stand at more than 126,000, and more than 1 in every 4 ICU beds is filled with a COVID-19 patient, according to the latest data from the Department of Health and Human Services. 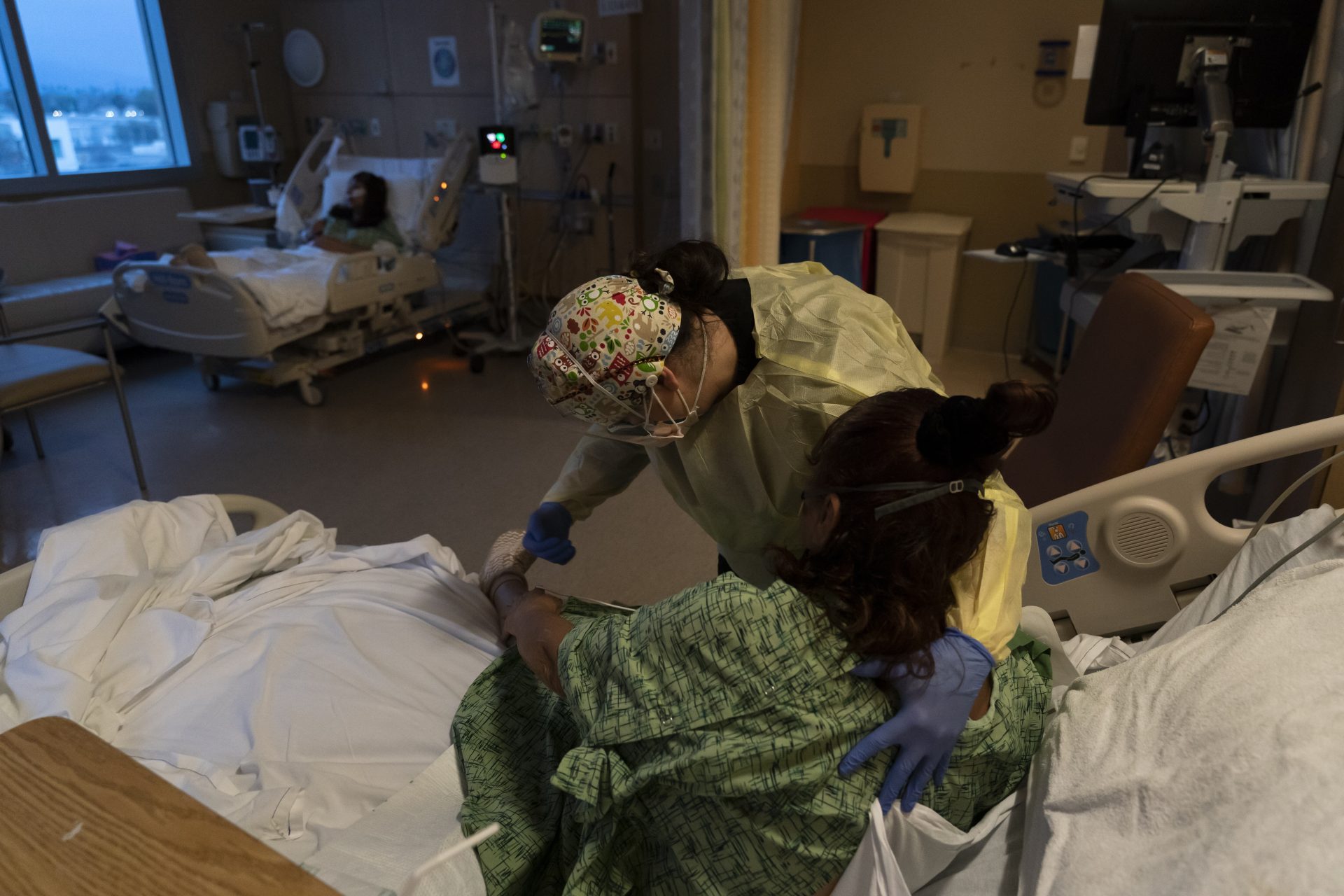 Registered nurse Nvard Termendzhyan helps Linda Calderon, a 71-year-old COVID-19 patient, sit up at Providence Holy Cross Medical Center in Los Angeles, Dec. 13, 2021. Hospitals across the U.S. are feeling the wrath of the omicron variant and getting thrown into disarray that is different from earlier COVID-19 surges.

When you get sick with omicron, what are the symptoms?

What those hospital numbers don’t tell us is what a typical case looks like.

As with previous variants, the vast majority of people infected with omicron have a mix of symptoms that resolve relatively quickly and don’t require hospital care.

And doctors are finding many of these cases tend to look like an ordinary upper respiratory infection. In other words, what you think of as the common cold.

“It’s mostly that runny nose, sore throat and nasal congestion,” says Dr. John Vanchiere, the associate director of the Center for Emerging Viral Threats at LSU Health Shreveport. “The cough is milder [than previous variants], if there’s any cough at all, and fever seems to be a little less common.”

This fits with early data from the U.K. showing that fever and cough are not as prevalent with omicron cases there and that the five top symptoms are runny nose, headache, fatigue, sneezing and sore throat.

With omicron, the symptoms also come on more quickly once you’re infected. Several studies have found that the incubation period — the time it takes to develop symptoms after being exposed — is about three days. In contrast, delta took about four days, and the original variant took more than five.

Another difference doctors are noticing: Loss of smell and taste — considered a telltale sign of COVID-19 — is not nearly as common with omicron infections. And fewer patients have symptoms related to lower respiratory problems, such as shortness of breath, says Vanchiere, including older patients.

At the same time, it appears — anecdotally at least — that certain symptoms show up more with omicron than they did with delta. Three that have gained attention are nausea, night sweats and lower back pain.

But it’s very possible that doctors and patients are simply paying more attention to these symptoms than they did with earlier variants, says Dr. Scott Roberts, an assistant professor of infectious diseases at the Yale School of Medicine.

“A lot of this is probably magnifying these symptoms under a microscope instead of clear changes,” he says. “Omicron versus delta are really more similar than they are different.”

And just like earlier variants, omicron can’t be defined as causing only a narrow group of symptoms. As at earlier stages in the pandemic, many patients are still having some combination of fever, gastrointestinal problems, aches and pains, brain fog, weakness and, less often, trouble breathing, says Mount Sinai’s Carr.

“Omicron can present in a myriad of different ways,” he says.

It’s also still not clear how much vaccines and prior infections are responsible for some of these early clinical impressions that omicron is causing a milder constellation of symptoms, says Dr. Daniel Griffin, who’s chief of infectious diseases at ProHEALTH in New York and an instructor at Columbia University.

“It just seems that people who have been vaccinated ahead of time are getting much milder symptoms across the board,” he says.

This was the case even before omicron: People who had breakthrough infections tended to have fewer symptoms — and milder ones — than those who were unvaccinated. 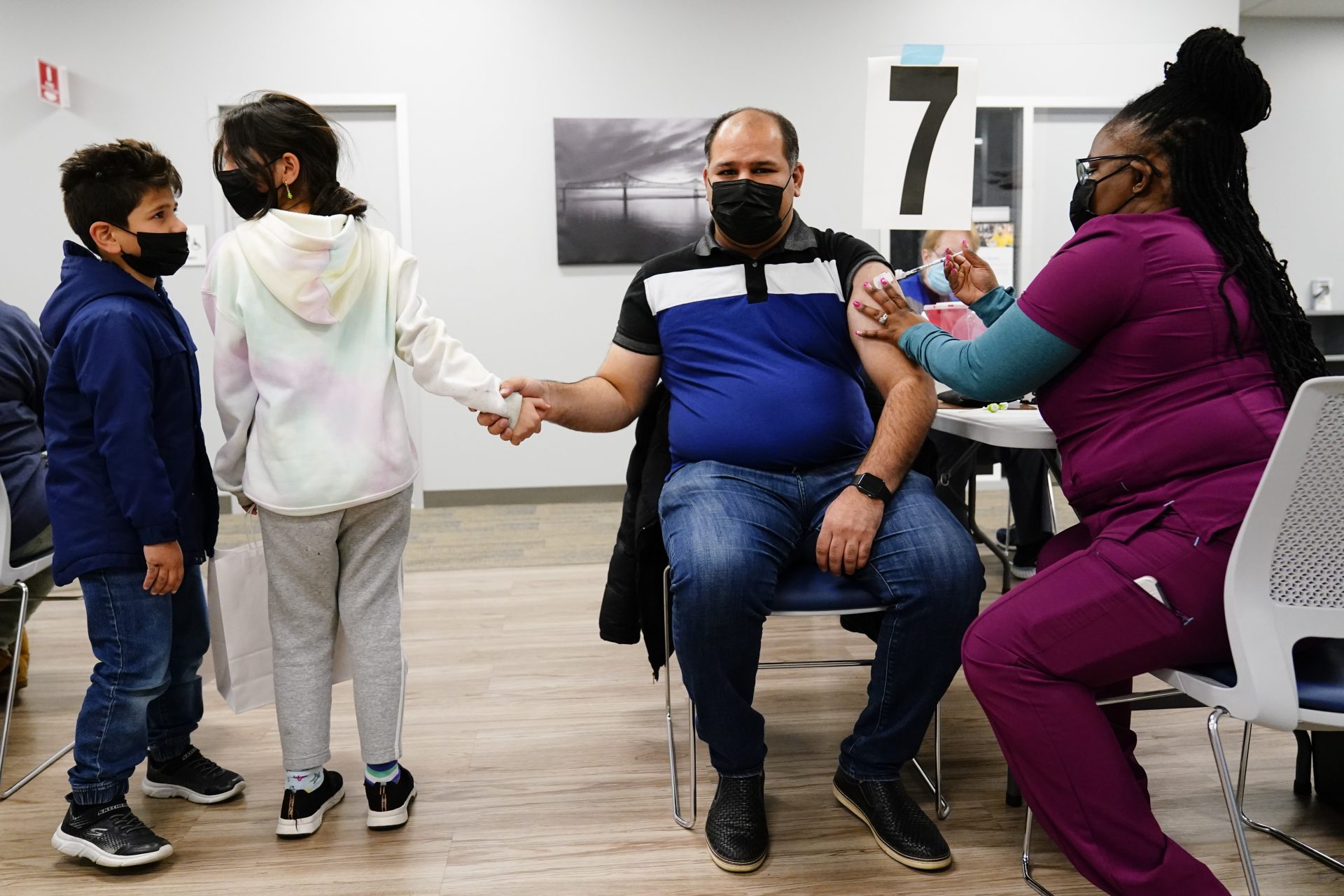 Nurse Sheena Davis, right, administers a dose of a Moderna COVID-19 vaccine to, Imran Amjad, as he holds his daughter’s Falah Imran’s hand and her brother Muhammad Ali Amjad, 6, looks on during a vaccination clinic at the Keystone First Wellness Center in Chester, Pa., Wednesday, Dec. 15, 2021. (AP Photo/Matt Rourke)

So if I do get omicron, what’s my risk of getting very sick?

With SARS-CoV-2, the big danger is that a mild illness will turn into a life-threatening one. Although that could definitely still happen with omicron, the risk appears to be lower than it was with delta.

A study published online on Jan. 2 provides some of the first compelling evidence from the U.S. that the chance of ending up in the hospital is lower with omicron compared with the delta variant.

Scientists at Case Western Reserve University analyzed health records from more than a half-million people infected with SARS-CoV-2 across the country, including 14,000 people possibly infected with omicron from Dec. 15 to 24, after the variant became dominant.

“In this period, we still have delta circulating in the community. But you’re pushing more and more and more toward the omicron variant,” says Davis, who contributed to the study.

This lower risk with omicron is also consistent with what scientists have observed in South Africa and the United Kingdom.

Xu and her team estimate that, in their study, about 60% of the people were vaccinated. So some of this lower risk could be because of vaccination, but the data altogether suggests that there is a reduced risk for hospitalization with the omicron variant compared with the delta variant.

In particular, Xu and her team observed a similar reduction in risk across all age groups, including children under age 5, who are not eligible for vaccination, and children ages 5 to 15, who may have been vaccinated but haven’t been boosted.

That consistency, Xu says, suggests the reduction in severity is due, in part, to something inherent with omicron itself and not simply because of changes in vaccination status.

“So this is really something that’s different between omicron and delta,” Xu says. That all said, this reduction in risk doesn’t mean omicron will be mild for everyone. For people who are at high risk for severe disease, such as older people or those with underlying health issues, the chance of being hospitalized is still quite significant. For example, if you’re over age 65, your risk of being hospitalized with COVID-19 is still 5% with the omicron variant, which means 1 in 20 people infected in this age group will end up in the hospital. (By contrast, with the original version of the virus, the rate was 1 in 10.)

That’s why, she says, everyone should be vaccinated and boosted. As with previous variants, being vaccinated greatly protects you from severe disease with omicron. A study from the U.K. government, published last week, found that three doses of vaccine cuts the risk of hospitalization due to omicron by about 80% compared with a person who’s not vaccinated at all. 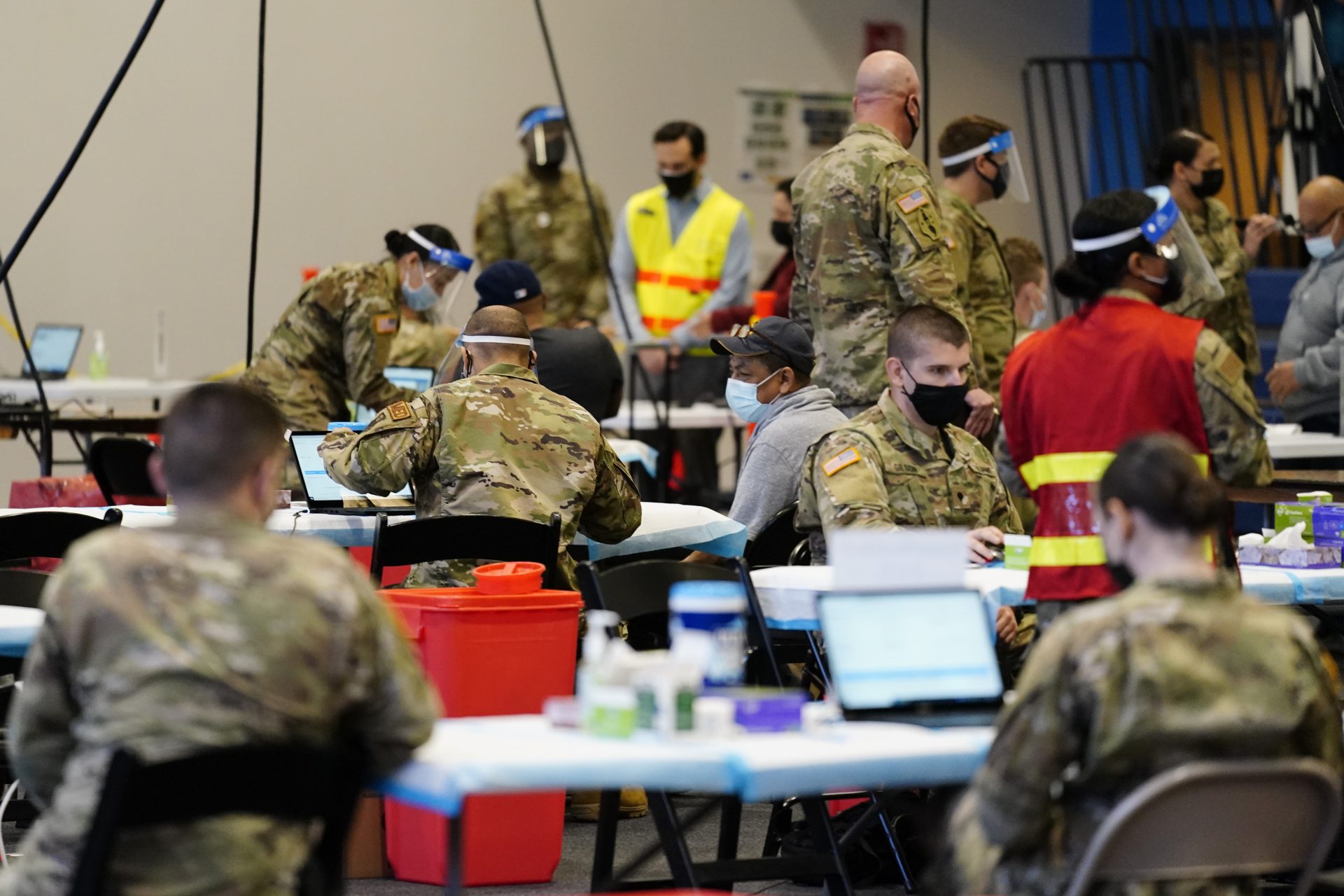 Members of the military inoculate people with the Johnson & Johnson COVID-19 vaccine at the Esperanza Community Vaccination Center in Philadelphia, Friday, April 9, 2021.

If you do end up at the hospital, how bad is it?

Even though early data shows that omicron is milder than delta, many hospitals are packed because the sheer number of people getting infected is enormous.

And doctors are finding a key difference among their patients who are ending up in the ER or being admitted: Many are neither struggling to breath nor dealing with perilously low oxygen levels.

Those two conditions were “a hallmark of the first disease and of delta and not nearly as prominent in omicron,” says Mount Sinai’s Carr.

In the past, it was basically a given that a severe case of COVID-19 would wreak havoc on the lungs, at times leading to pneumonia and uncontrolled inflammation. But this apparent change in the disease — that a severe infection in the lungs doesn’t seem as common — means fewer people need supplemental oxygen or intubation.

“They’re not short of breath, and really the lungs are OK,” says Roberts, of Yale. These observations also line up with lab research that shows omicron does not replicate in lung tissue as well as delta.

Many of the patients who are being hospitalized often have some underlying health condition, or they’re older and more vulnerable to a viral infection. “What we’re seeing is something really tips these patients over the edge,” says Roberts. For example, an omicron infection may lead to complications of an existing condition such as diabetes or heart failure.

But Roberts says it’s still quite rare for people who are vaccinated and boosted to get seriously ill from omicron. About 80% of the patients at Yale New Haven Hospital are unvaccinated. And among those who are vaccinated, almost all have not received a booster shot.

While it’s welcome news that omicron is easier on the lungs, ProHEALTH’s Griffin says it’s not that way for some of his patients. And among unvaccinated people, he says, an omicron infection can feel like the same unforgiving disease to him.

What is ‘flurona’? Why are people talking about it now?