Officials pass flowers and other items left in memory of victims of Wednesday's fatal fire in the Fairmount neighborhood of Philadelphia on Thursday, Jan. 6, 2022. Officials say it's the city's deadliest single fire in at least a century. (AP Photo/Matt Rourke) 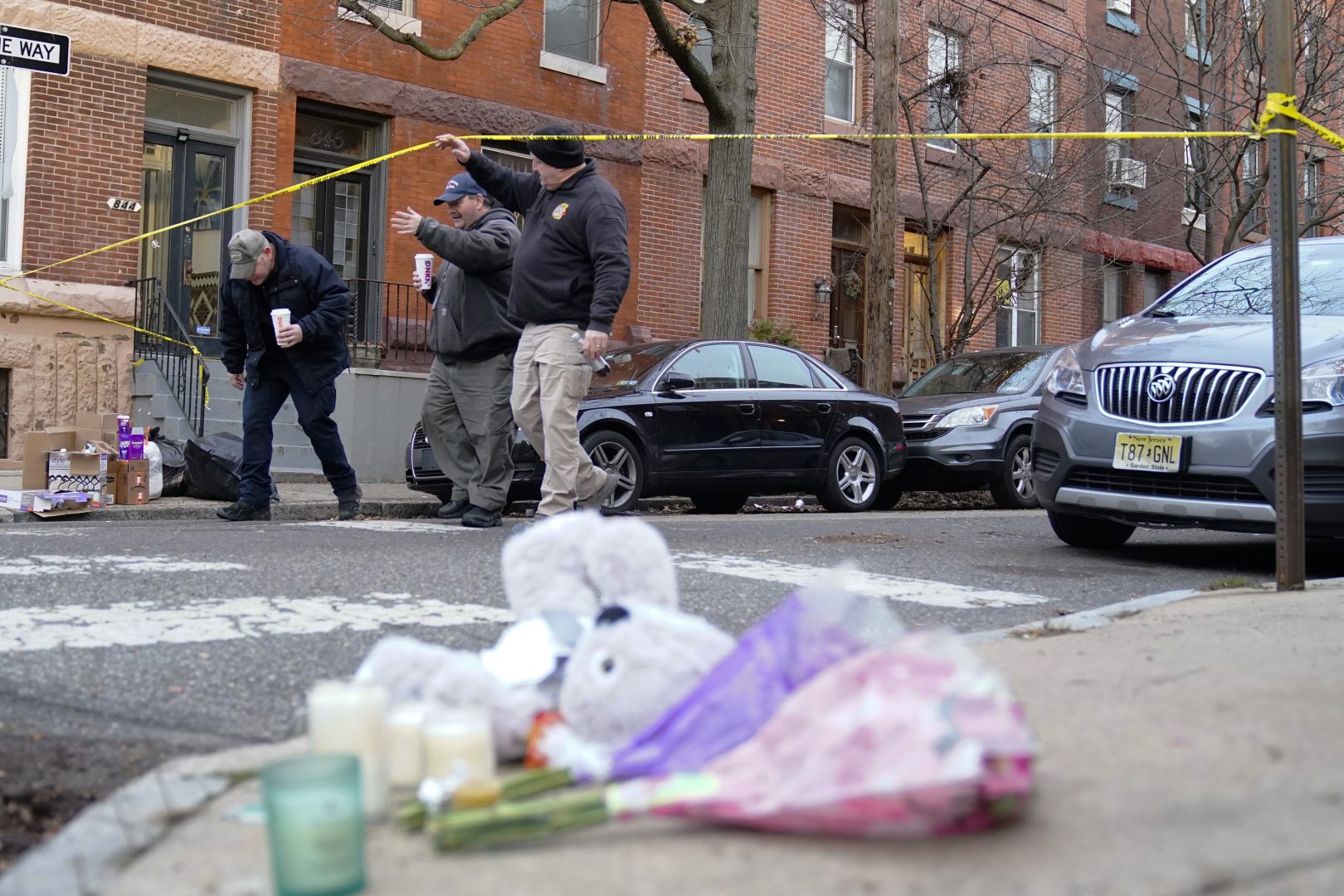 Officials pass flowers and other items left in memory of victims of Wednesday's fatal fire in the Fairmount neighborhood of Philadelphia on Thursday, Jan. 6, 2022. Officials say it's the city's deadliest single fire in at least a century. (AP Photo/Matt Rourke)

(Philadelphia) — The principal of a Philadelphia school that lost five current or former students in a house fire that killed a dozen family members said it will be “a long, long time” before the community recovers.

“They weren’t people who passed through halls or classrooms or school buildings, they left a lasting impression,” he said Friday. “They were really cared for and cared about.”

He spoke as family matriarch Vanessa McDonald faced the grim task of going to the Medical Examiner’s Office in Philadelphia on Friday to identify her loved ones, a family spokesperson said. She was not home when the fire broke out early Wednesday, but lost three daughters and nine grandchildren in the blaze.

Two people survived, including a 5-year-old who may have started the fire while playing with a lighter near a Christmas tree, according to a search warrant. A hospital declined to disclose any information about his condition on Friday, citing privacy laws.

Fire investigators were meanwhile finishing up their work at the scene and hoped to announce a preliminary cause within days, according to Rob Cucinotta, a spokesperson for the federal Bureau of Alcohol, Tobacco, Firearms and Explosives.

Victim Quintien Tate-McDonald, 16, was remembered as a joyful teen who engaged with teachers, youngsters and neighbors alike.

“A lot of people latched on to Quintien,” Vitvitsky said. “He would stop by all the time, mostly just shoot the breeze, (talk about) how things were going with his family.”

The teen, who attended a charter high school downtown with a technology focus, had his share of responsibilities, but seemed to take them in stride. He lived with an extended family that included five siblings and five cousins.

“He certainly didn’t shirk his responsibilities,” the principal said.

The teen was likewise remembered with affection at a local church he attended with his sister, Destiny, a former basketball player at Bache-Martin who also died in the fire.

“He had no pretense,” said Jenée Chizick-Agüero, a church member who said he would walk over to say hello and play with her toddler. “He carried his happiness with him.”

Destiny McDonald, an eighth grader, had switched to an online charter school that described her as a bright, energetic student who hoped to become a chef and own her own restaurant.

“She always talked about her siblings with love and respect,” the school, Insight PA, said in a statement.

Other victims included a pair of cousins who were in the second and fourth grades at Bache-Martin, and an aunt, Quinsha White, who had attended the school, Vitvitsky said.

Relatives have identified the other adult sisters who died as Rosalee McDonald and Virginia Thomas. In all, eight children and four adults died, officials said.

Another family lived in the ground-floor unit but managed to escape the fast-moving fire, which began at about 6:30 a.m. and shot through the upper front windows facing the street.

ATF specialists and other investigators have combed through the charred, three-story brick duplex owned by the Philadelphia Housing Authority, the city’s public housing agency.

The Thomas and McDonald families had lived in the upstairs unit for about a decade, growing over time. In 2021, there were 14 people living in the four-bedroom apartment, according to Kelvin Jeremiah, the housing authority’s president and CEO.

Wednesday’s blaze was the deadliest fire at a U.S. residential apartment building since 2017, when 13 people died in an apartment in the Bronx neighborhood of New York City, according to data from the National Fire Protection Association. That fire started after a 3-year-old boy was playing with stove burners.

“This is something that’s going to be with us for a long, long time because of the impact,” Vitvitsky said. “It’s profound.”