Kellogg’s workers will vote on another tentative deal, but the strike may still go on 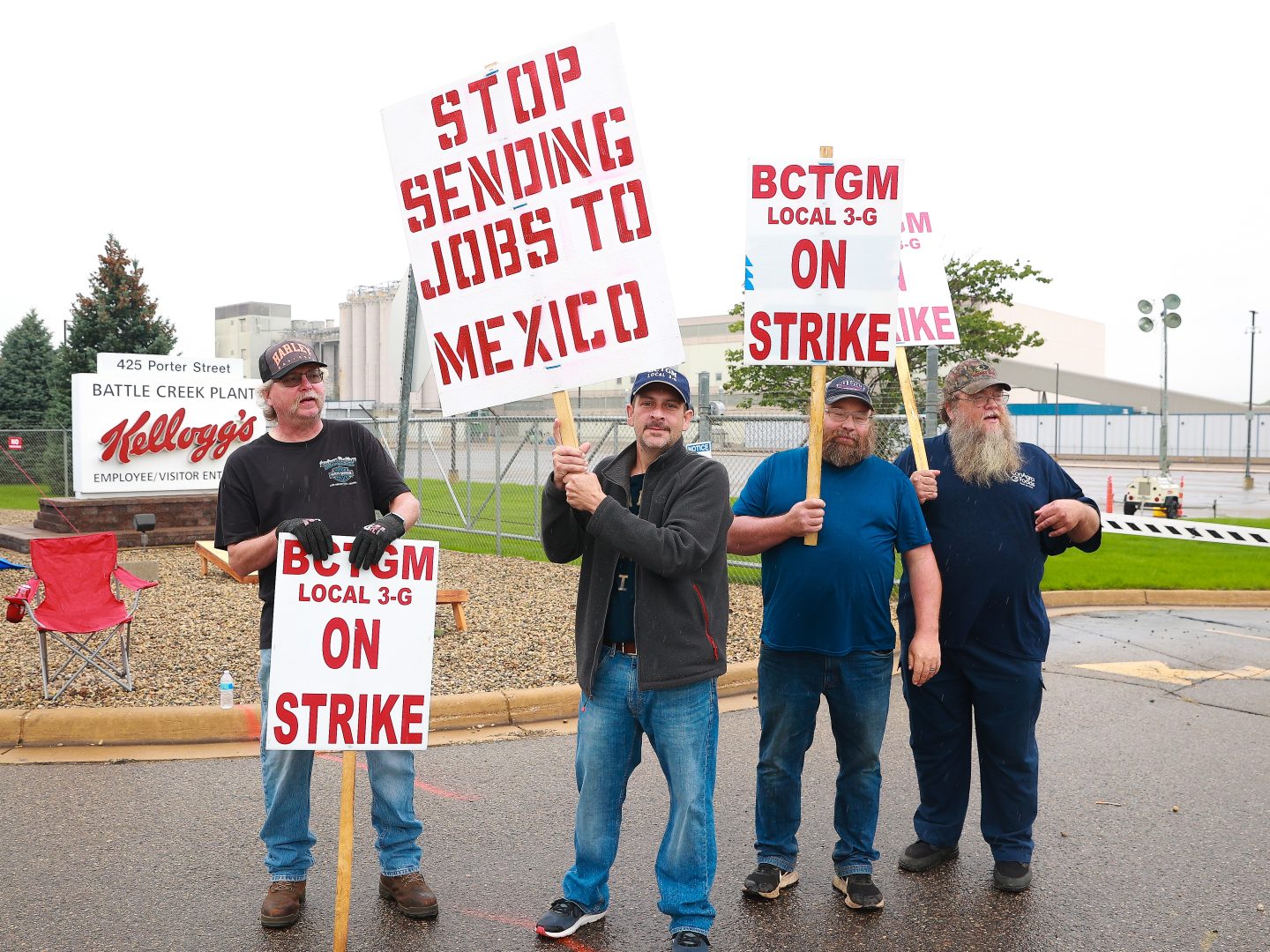 Even as the Kellogg Co. and the union representing its cereal plant workers jointly announced a tentative agreement to put an end to the months-long strike at the company’s four U.S.-based cereal plants, workers at a rally in Michigan criticized the deal in a hint that the strike could continue even longer.

“It’s a Trojan horse that’s been given to us that’s going to allow us to basically harm ourselves down the road,” said Trevor Bidelman, a mechanical technician at the Battle Creek plant and the president of the local union, at the rally.

Union members will vote over the next few days. Results are expected Tuesday.

The 1,400 workers of Kellogg’s plants in Omaha, Memphis, Battle Creek, Mich., and Lancaster, Pa., who are represented by the Bakery, Confectionery, Tobacco Workers and Grain Millers International Union, have been on strike since their contract expired on Oct. 5.

A “two-tier” wage system is a key issue

The most contentious issue has been a “two-tier” wage and benefits system, in which employees who started in 2015 or later are paid according to a different, lower wage scale than “legacy” employees.

Union members said they wanted a complete end to the two-tier system, or short of that, a pathway for the so-called “transitional” employees to join their better-compensated colleagues after a certain period of time.

Thursday’s tentative deal comes less than two weeks after a previous agreement that was “overwhelmingly” rejected by union members.

“For all the reasons that we went out on strike, none of it was addressed. We went out to fix this equality problem. And [the previous] tentative agreement did not speak to that at all,” said Todd Manusos, a material transfer operator at the Battle Creek plant, in an interview with NPR.

In a news release Thursday, Kellogg’s said it was “pleased” to announce the new deal. The company highlighted the deal’s increased pay for all workers and an “accelerated, defined path” for the lower-tier employees to move into the higher tier.

“We value all of our employees. They have enabled Kellogg to provide food to Americans for more than 115 years,” said Kellogg Chairman and CEO Steve Cahillane. “We are hopeful our employees will vote to ratify this contract and return to work.”

Workers could return after Christmas

If approved, the agreement would bring workers back to the plants after Christmas. Kellogg’s declined further comment.

A spokesperson for the national union also declined to comment on the details of the agreement.

Manusos, who does not have a position with the local or national union, described the new agreement as “1% better” and “still not close” and said he expected it to be voted down.

When the union membership rejected last week’s deal, Kellogg’s announced it would replace the striking workers with new permanent employees, and followed up by listing the jobs online.

Afterward, Nebraska Gov. Pete Ricketts, a Republican whose state is home to one of the four plants, urged the company to return to the bargaining table.

And President Biden said in a statement that he was “deeply troubled” by Kellogg’s threat to permanently replace the striking employees.

“Permanently replacing striking workers is an existential attack on the union and its members’ jobs and livelihoods. I have long opposed permanent striker replacements and I strongly support legislation that would ban that practice,” Biden said.

Friday’s rally in Battle Creek, which was attended by Sen. Bernie Sanders, had been organized before the announcement of the new tentative deal.

Sanders is the second high-profile Democrat to visit the Kellogg’s picket line after a visit by Labor Secretary Marty Walsh to the plant in Lancaster in October.

This year has seen a boom for organized labor — with major strikes in manufacturing, media and health care, and highly watched union votes at employers like Amazon and Starbucks. Experts say it is borne out of the pandemic and a newly strong job market for workers.