Washington Dept. of Transportation snow plows work on a stretch of eastbound Interstate Highway 90, Thursday, Dec. 9, 2021, as snow falls near Snoqualmie Pass in Washington state. More U.S. drivers could find themselves stuck on snowy highways or have their travel delayed this winter due to a shortage of snowplow drivers as some states are having trouble finding enough people willing to take the jobs.

The labor shortage and lingering concerns about the pandemic have left employers scrambling to find enough school bus drivers, waiters, cooks and even teachers. 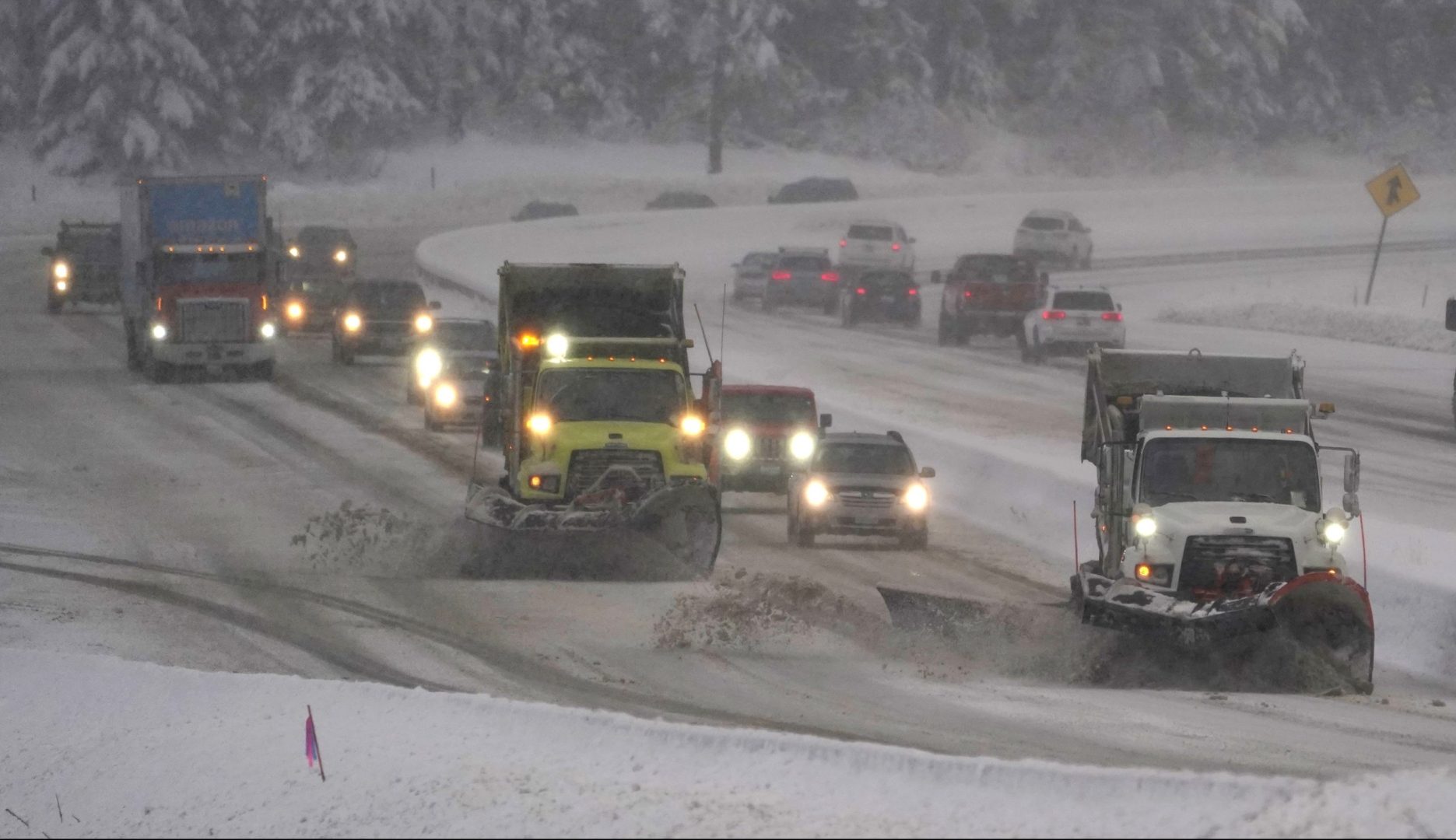 Washington Dept. of Transportation snow plows work on a stretch of eastbound Interstate Highway 90, Thursday, Dec. 9, 2021, as snow falls near Snoqualmie Pass in Washington state. More U.S. drivers could find themselves stuck on snowy highways or have their travel delayed this winter due to a shortage of snowplow drivers as some states are having trouble finding enough people willing to take the jobs.

(Helana, Mont.) — More U.S. drivers could find themselves stuck on snowy highways or have their travel delayed this winter due to a shortage of snowplow drivers — a reality that could hit home Friday as winter storms start dumping snow from the Intermountain West to the Upper Great Lakes.

States from Washington to Pennsylvania, including Montana and Wyoming in the Rocky Mountains, are having trouble finding enough people willing to take the comparatively low-paying jobs that require a Commercial Driver’s License and often entail working at odd hours in dangerous conditions.

“We want the traveling public to understand why it could take longer this season to clear highways during winter storms,” said Jon Swartz, the maintenance administrator for the Montana Department of Transportation, which is short about 90 drivers. “Knowing this helps motorists to plan ahead and adjust or even delay travel plans.”

The labor shortage and lingering concerns about the pandemic have left employers scrambling to find enough school bus drivers, waiters, cooks and even teachers. The shortage comes as the number of Americans applying for unemployment benefits dropped last week to the lowest level in 52 years and some are seeking a better work-life balance. 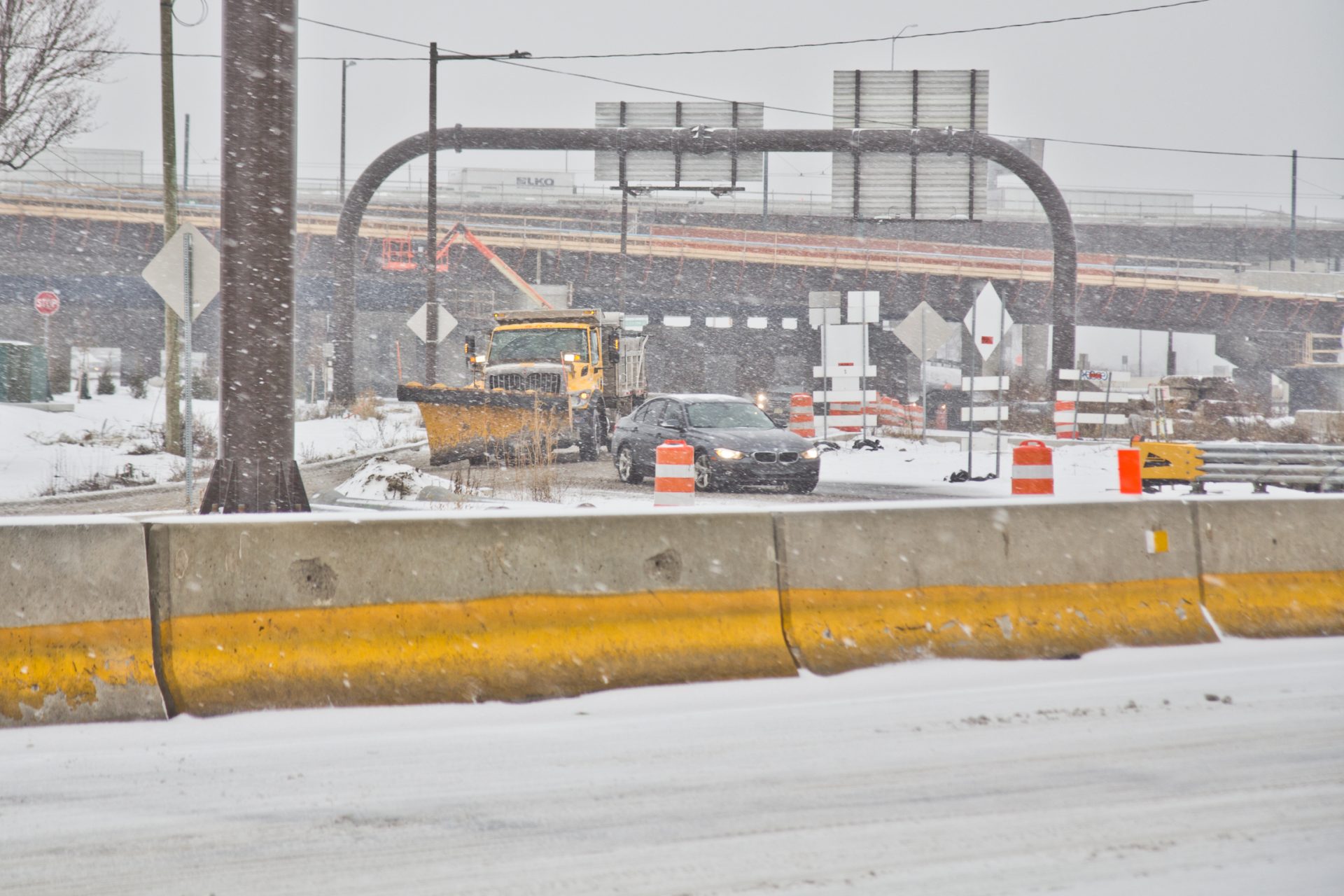 Several states are either already feeling the crunch or could be soon: Heavy snow is predicted in the coming days in large swaths of the country, including Utah and Colorado, where more than a foot (30 centimeters) is forecast in higher elevations. Over a half a foot could drop in parts of Nebraska and Iowa. Parts of Nevada and New Mexico also expect winter storms.

State transportation departments say there are several reasons for a lack of snowplow drivers: the record low unemployment rate, an aging workforce and an increased demand for diesel mechanics and CDL drivers in other industries. Private companies can also be more nimble — raising salaries and offering bonuses to drivers — than state agencies, which usually have to get legislative approval to change salaries.

“Everyone’s sort of competing for the same group of workers and private companies can often offer higher salaries than the state government,” said Barbara LaBoe, spokesperson for Washington state’s Department of Transportation.

Along with the competitive market, LaBoe said Washington also lost 151 winter operations workers who did not want to comply with the state’s COVID-19 vaccine mandate.

One of the main competitors for states seeking workers with a Commercial Driver’s License are private trucking companies that have been raising driver pay, in some cases several times this year, to fill their own shortages and meet the increasing demand to move freight and clear supply chain bottlenecks.

The American Trucking Associations estimates there will be a record shortage of just over 80,000 drivers this year, and that doesn’t include the shortfall in drivers for school buses, public transportation or snowplows.

The ATA says the shortage has many roots, including many drivers nearing retirement age, the pandemic causing some to leave the industry and training schools churning out fewer new drivers in 2020. Others may leave the industry because they don’t like being away from home while an increase in the number of states legalizing marijuana leads to more drivers being unable to pass a drug test, the ATA says.

Some states are willing to hire snowplow drivers and pay for their CDL training, but it’s not likely those hires will be ready to work this winter, officials said.

Some snowplow drivers work year-round in highway maintenance jobs, while seasonal workers are hired to fill the additional shifts in the winter.

The shortage is leading states to make plans to shift mechanics and other full-time employees who have Commercial Driver’s Licenses into plows, which can cause problems if a plow needs maintenance work and the mechanic is out driving. 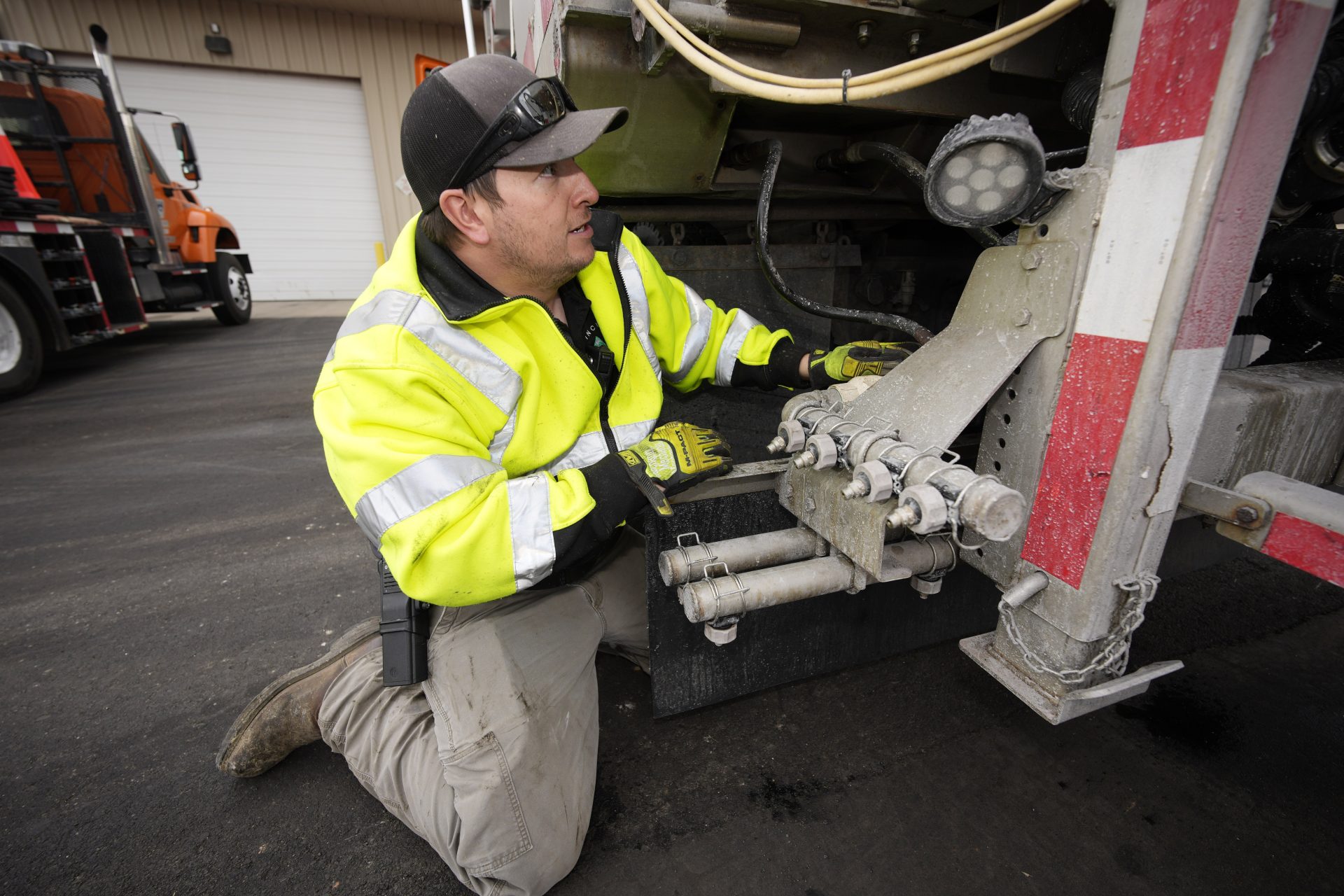 Chris Vigil checks the hoses on the material spreader as he prepares his snowplow for operation as forecasters predict the first snow of the season to sweep over Front Range communities Thursday, Dec. 9, 2021, at the Colorado Department of Transportation shed in Castle Rock, Colo.

Wyoming has priorities for which roads will be plowed first and for how many hours per day plows will operate on each roadway. Interstate 80, the major east-west corridor across the southern part of the state, can be plowed around the clock while plowing stops on other roads, such as Interstates 90 and 25, between midnight at 4 a.m. Those guidelines may come into play more this year, said Luke Reiner, director of Wyoming’s Department of Transportation.

In Washington, LaBoe said some roads and mountain passes will be closed longer than usual during and after significant storms and some roads may not receive the same level of service.

Brief or isolated storms won’t cause problems in most states, in part because departments can move drivers and equipment around based on the weather forecast.

“If we have a series of storms over several days or if it hits the whole state at once, (the shortage) is going to become more evident because we don’t have as deep a bench,” LaBoe said.

Washington is still short about 150 seasonal and full-time workers, but things have improved since October when it was short 300 workers.

Even if states are able to hire drivers with commercial licenses, they still have to train them to run a snowplow and load the truck with salt and sand before learning a route.

“When you’re plowing the road you need to know where the bridge abutment is and where the expansion joints are so you don’t hook that with a plow,” LaBoe said.

Pennsylvania is short 270 permanent positions and 560 temporary ones, but the Department of Transportation said that doesn’t mean the roads will be treacherous this winter. 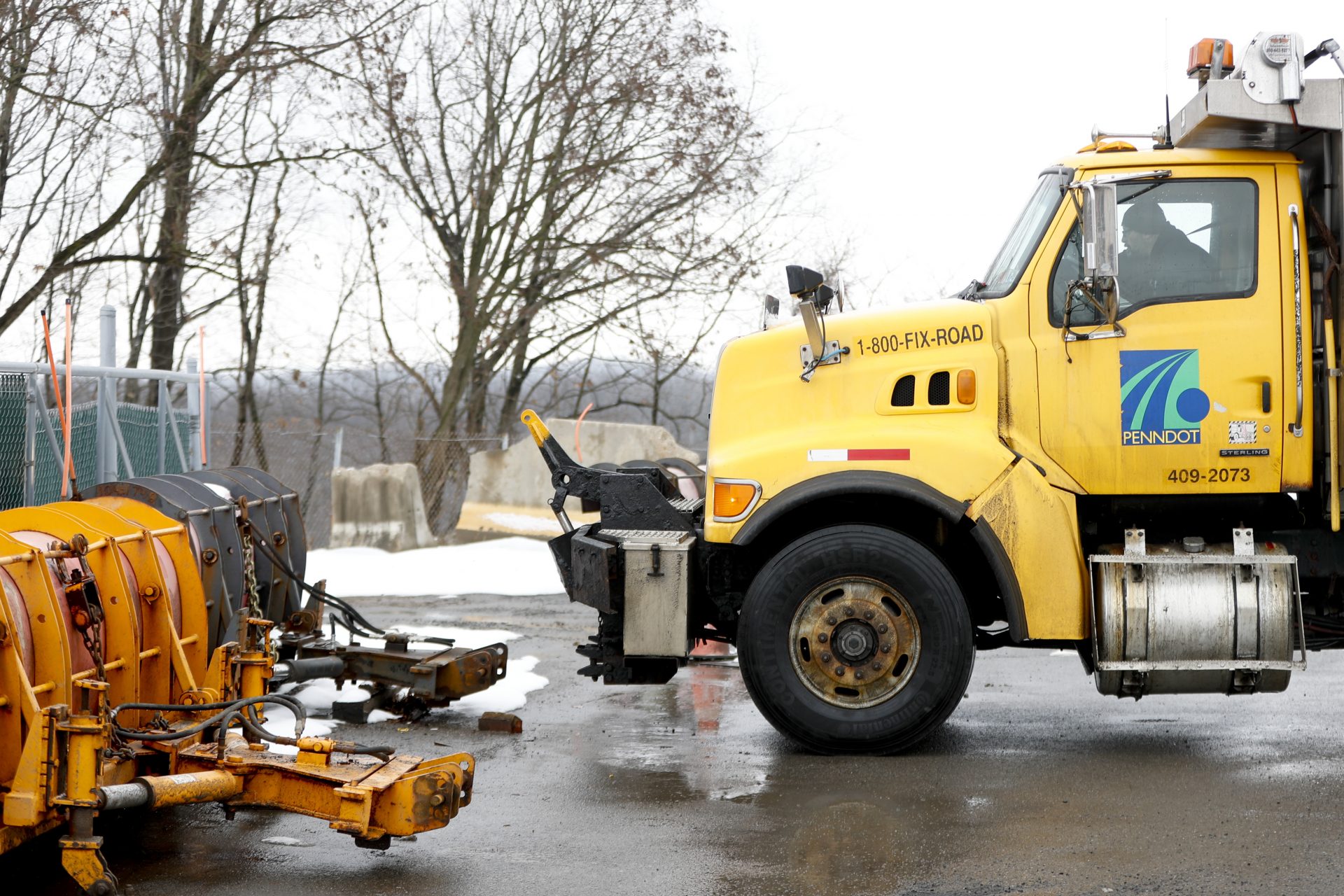 A Pennsylvania Department of Transportation road treatment truck pulls in to attach a plow at a storage facility in Franklin Park, Pa. on Friday, Jan. 18, 2019.

“Our goal is to keep roads safe and passable rather than completely free of ice and snow,” said Alexis Campbell, spokesperson for the Pennsylvania Department of Transportation. The roads will be cleared once the snow stops, she said.

Ease of travel is important to businesses. Capitol Courier has contracts with deadlines to deliver electronic replacement parts from their warehouse in Helena, Montana, to about 30 businesses around the state as soon as they call.

“The roads are critical to what we do,” said Shawn White Wolf, co-manager of Capitol Courier.

Snowplow drivers are devoted to their jobs, understanding their work is critical to the safety of the traveling public and to emergency responders, said Rick Nelson director of the winter maintenance technical service program for the American Association of State Highway and Transportation Officials.

Still, he understands that convincing newcomers “to be out there in the worst conditions” can be difficult.

Nelson said the shortage means states will be shifting resources when they can and making sure roads are clear during times of peak demand while “you try to recruit, get out there and beat the bushes and convince folks that jumping in a plow in the middle of the night at Christmastime is a good career choice.”

District attorney consulted with Pennsylvania State Police before shooting, then ruled it justified