FILE - Attorney General Merrick Garland speaks at a news conference at the Justice Department in Washington, on Nov. 8, 2021. The Department of Justice has sued Texas over new redistricting maps, saying the plans discriminate against voters in the state's booming Latino and Black populations. The maps passed by Texas' Republican-dominated Legislature favor incumbents and decrease political representation for growing minority communities that have driven growth in the nation’s largest red state.

"Our complaint alleges that several of those districts were drawn with discriminatory intent."

(Washington) — The Justice Department on Monday sued Texas over the state’s redistricting plans for Texas’ congressional delegation and the state legislature, alleging that they put minority voters at a disadvantage.

The lawsuit filed by the department in the Western District of Texas says the state’s redistricting plans violate Section 2 of the Voting Rights Act.

“Our complaint today alleges that the redistricting plans approved by the Texas state legislature and signed into law by the governor will deny Black and Latino voters an equal opportunity to participate in the voting process and to elect representatives of their choice,” Associate Attorney General Vanita Gupta said at a news conference.

“Our complaint also alleges that several of those districts were drawn with discriminatory intent,” she added.

The Supreme Court has ruled that redrawing district maps along partisan lines is a political question beyond the court’s purview, but doing so to discriminate against minorities is unlawful.

The lawsuit is the fourth the Justice Department has brought against Texas since President Biden took office in January. It’s already suing the state over immigration enforcement, its new voting law and Texas’ restrictive new abortion law. 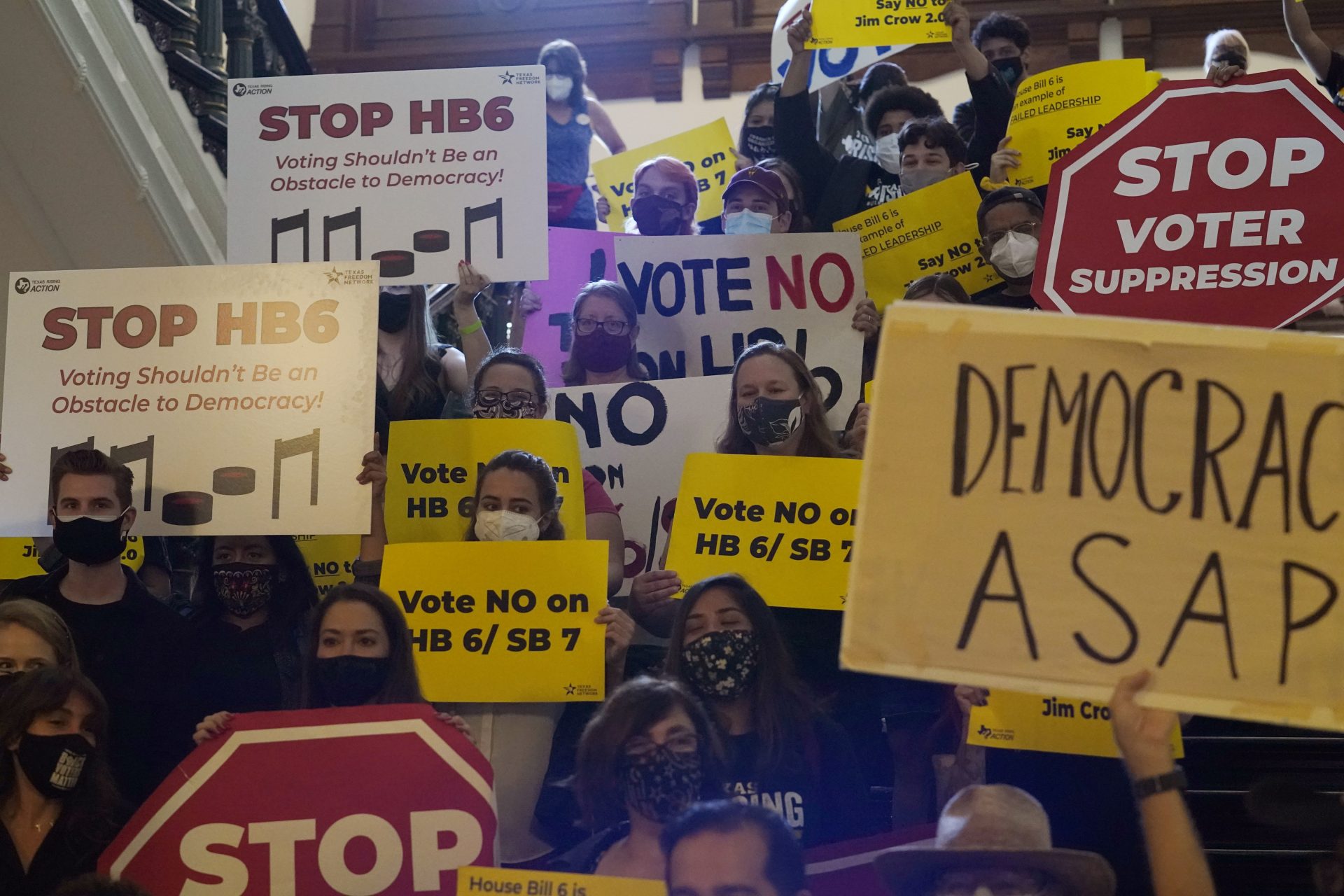 In this May 6, 2021 file photo, a group opposing new voter legislation gather outside the House Chamber at the Texas Capitol in Austin, Texas. Texas Republicans dug in Saturday, May 29, for a final weekend vote on some of the most restrictive new voting laws in the U.S., finalizing a sweeping bill that would eliminate drive-thru voting, reduce polling hours and scale back Sunday voting, when many Black churchgoers head to the polls.

“I am confident that our legislature’s redistricting decisions will be proven lawful, and this preposterous attempt to sway democracy will fail,” Paxton wrote on Twitter.

In its lawsuit, the Justice Department says that Texas’ population increased by roughly 4 million people over the past decade, 95% percent of which is attributable to minorities. But, it says, the state’s legislature refused to recognize the growing minority electorate in its redistricting plans, which the department alleges were enacted through a rushed and opaque process with minimal opportunity for public comment.

“Despite the significant increase in the number and proportion of eligible Latino and Black voters in Texas, the newly enacted redistricting plans will not allow minority voters an equal opportunity to elect representatives of their choice,” Gupta said. “Instead, our investigation determined that Texas’ redistricting plans will dilute the increased minority voting strength that should have developed form these significant demographic shifts.”

The complaint points to the two new congressional seats Texas was awarded following the latest census and says the state designed those congressional districts “to have Anglo voting majorities.”

It also says that the state “surgically excised” minority communities from the core of the Dallas-Fort Worth area by attaching them to heavily Anglo rural counties and that Texas “intentionally eliminated a Latino electoral opportunity” in a West Texas congressional district where courts had identified Voting Rights Act violations during the previous two redistricting cycles.

“This is not the first time Texas has acted to minimize the voting rights of its minority citizens,” the department says in its complaint. “Decade after decade, Texas has enacted redistricting plans that violate the Voting Rights Act.”

Attorney General Merrick Garland said the Justice Department is committed to protecting voting rights, but he said — as he has before — that doing so has grown much more difficult since the Supreme Court removed the department’s preclearance authority. That tool ensured that the Justice Department had to sign off on voting changes in certain jurisdictions.