The 11-2 Panthers moved up four spots to No. 13 in Sunday’s AP Top 25 following its 45-21 win over Wake Forest in the ACC championship game. 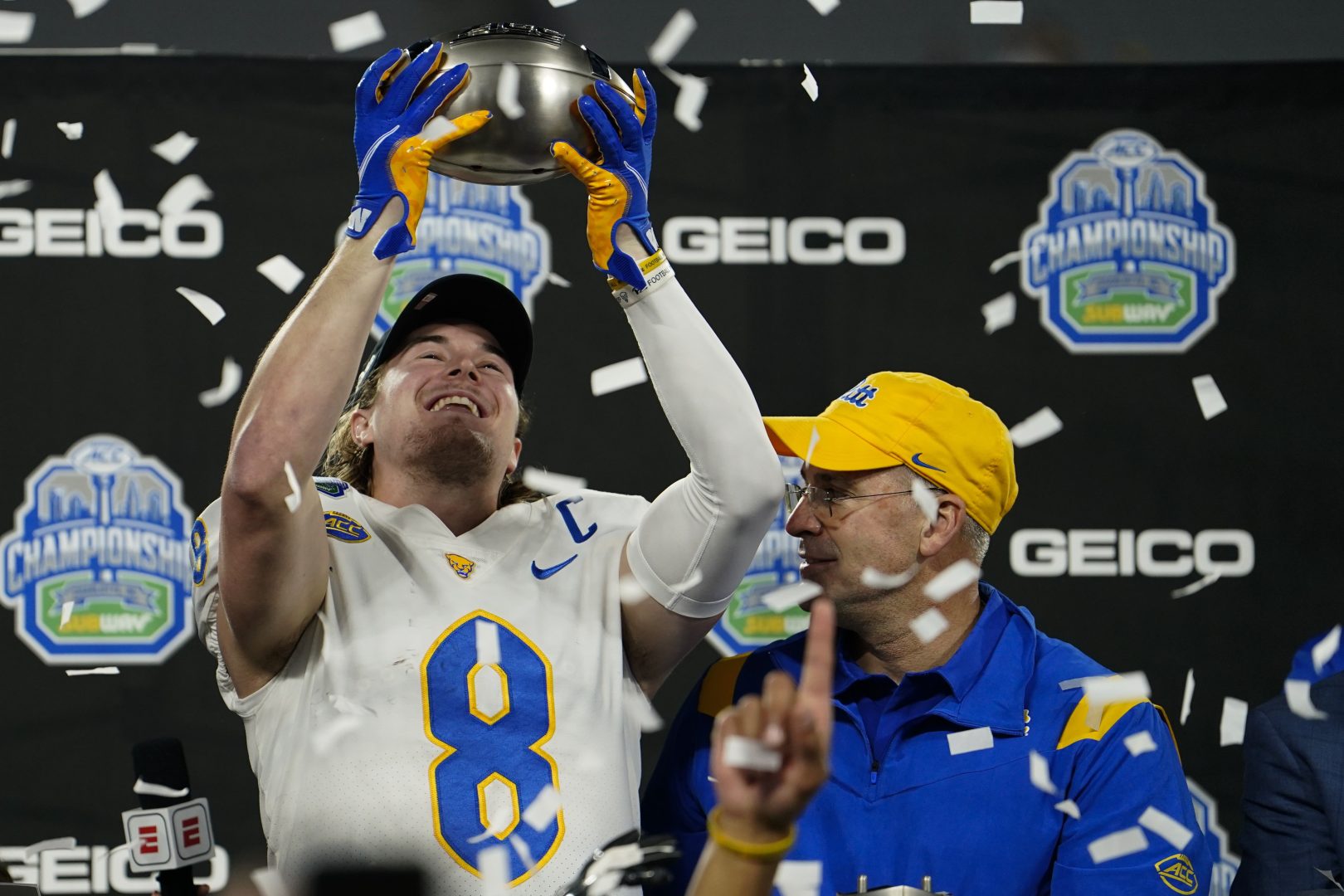 (Atlanta) — A milestone season for Pittsburgh and quarterback Kenny Pickett is continuing with a Peach Bowl matchup against Michigan State.

No. 13 Pitt’s reward for its first Atlantic Coast Conference championship is the Panthers’ first New Year’s Six bowl since 2004 in the Dec. 30 game in Atlanta against No. 11 Michigan State.

Pickett threw for two touchdowns but his highlight was a 58-yard scoring run that included a fake slide.

Though Pickett likely will be among the top quarterbacks selected in next year’s NFL draft, he already has said he will play in the bowl game instead of opting out.

“That’s who Kenny Pickett is,” Narduzzi said. “That’s what our team is all about. It’s a team-oriented team. They’re unselfish and they play for each other. I think that’s the most impressive thing about this football team and that’s why we are where we are today.” 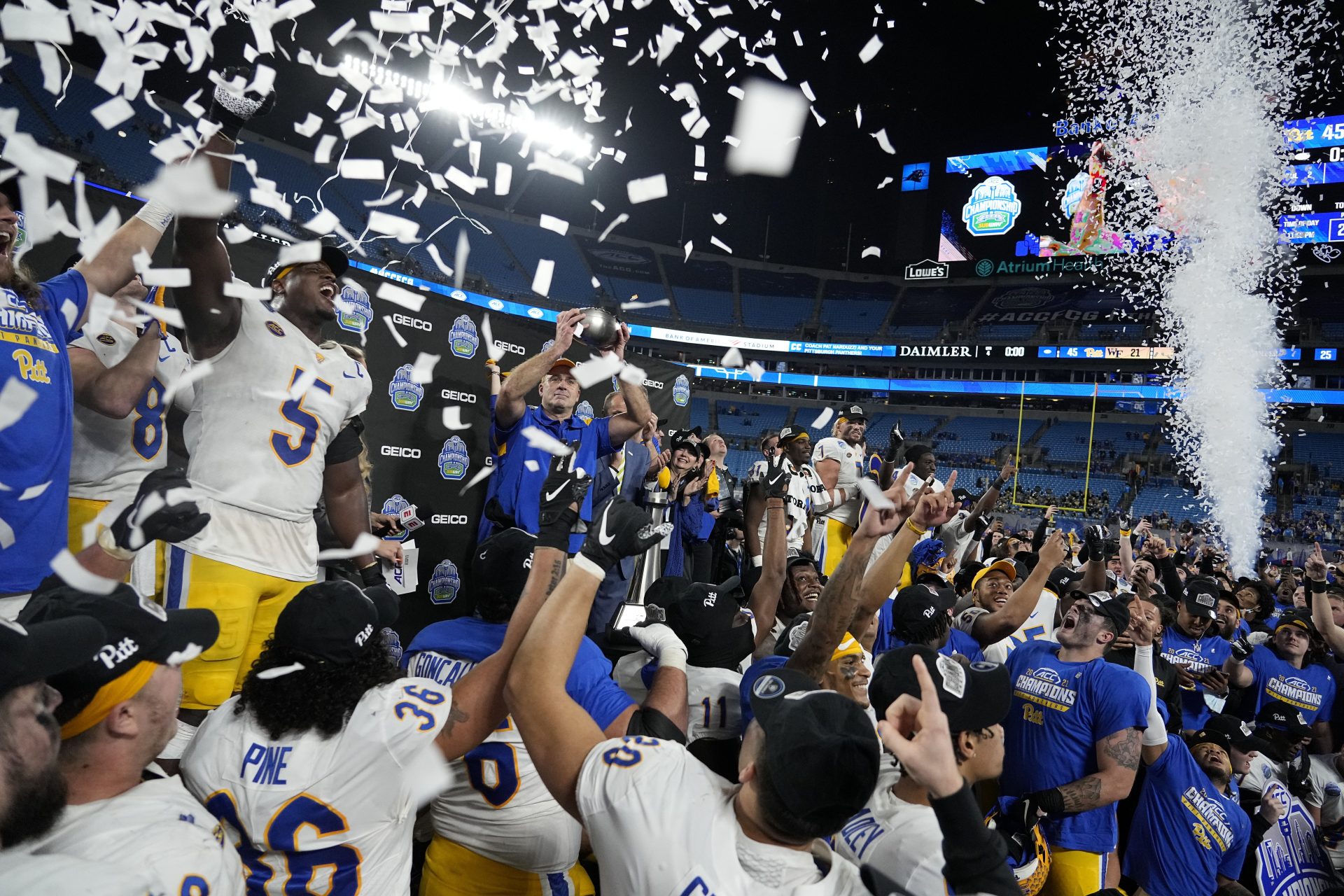 Pass defense has not been a strength for Michigan State coach Mel Tucker’s defense. The Spartans have allowed 337.67 yards passing per game.

“I know he’s a great player,” Tucker said of Pickett. “We’ll have to do a much better job in our pass defense.”

Pitt lost to Utah 35-7 in the Fiesta Bowl following the 2004 season in its last New Year’s Six game.

Michigan State (10-2) closed its regular season by beating Penn State 30-27 on Nov. 27 as Payton Thorne threw two touchdown passes and ran for another.

The Spartans feature a strong running game. Kenneth Walker III ran for 138 yards in the win over Ohio State, giving him 1,636 yards with 18 touchdowns for the season.

Tucker said no player has informed him of plans to opt out of the bowl game.

“I haven’t heard from any of the guys that they’ve decided not to play so at this point I’m assuming everyone wants to play,” Tucker said.

Pickett has boosted his NFL stock and could be one of the Heisman Trophy favorites following his record-setting season. He passed Dan Marino’s school record of 79 career touchdown passes on Saturday night. Pickett now has 81.

Pickett also set an ACC record for most scoring passes in a season with 42. Clemson’s Deshaun Watson had 41 in 2016.

Tucker led the Spartans to a dramatic turnaround from a 2-5 finish in the pandemic-shortened 2020 season. The eight-game jump in wins is the most dramatic improvement in school history.

Michigan State recovered from a 56-7 loss at Ohio State to finish its regular season by beating Ohio State. Michigan State finished undefeated at home for the first time since 2015.

Each team will be making its first Peach Bowl appearance.

Michigan State is the first Big Ten team to play in the game since Michigan in 2018. Pitt is the ACC’s first team in the Peach Bowl since Florida State in 2015.

It is the first Big Ten-ACC matchup in the game since 1988, when North Carolina State beat Iowa 28-23.