FILE - Republican presidential candidate Sen. Robert Dole R-Kan., gestures while making a speech in Washington, March 28, 1988. Bob Dole, who overcame disabling war wounds to become a sharp-tongued Senate leader from Kansas, a Republican presidential candidate and then a symbol and celebrant of his dwindling generation of World War II veterans, has died. He was 98. His wife, Elizabeth Dole, posted the announcement Sunday, Dec. 5, 2021, on Twitter.

Dole was a powerful committee chairman in the early 1980s and then party leader from 1985 until he resigned 11 years later to concentrate on his presidential campaign.

Dole’s death was confirmed in a tweet by the Elizabeth Dole Foundation.

“It is with heavy hearts we announce that Senator Robert Joseph Dole died early this morning in his sleep. At his death, at age 98, he had served the United States of America faithfully for 79 years.”

Dole was in many ways the embodiment of the World War II generation in Congress. He had served in a combat division in Italy and suffered grievous wounds that kept him in military hospitals for years after the war. But despite losing the use of his right arm, he got through law school and became a public prosecutor, state legislator, representative and U.S. senator.

Dole was a giant of the Senate, a powerful committee chairman in the early 1980s and then party leader from 1985 until he resigned 11 years later, in 1996, to concentrate on his presidential campaign. He had won the GOP nomination easily that year but fought an uphill, losing campaign against incumbent President Bill Clinton. Previously, Dole had been the party’s vice presidential nominee with President Gerald Ford in 1976 and had sought the presidential nomination in 1980 and 1988.

“When you think about the fact that Bob Dole was elected to the House of Representatives the same year that John F. Kennedy was elected president, and that he went on, for example, in [1994] to be one of the most important factors in the defeat of Bill Clinton’s health insurance plan, and then run for president in 1996, you realize that, in a sense, the last four decades of the 20th century were Bob Dole territory,” said Ross Baker, a political scientist at Rutgers University.

In retirement, Dole had remained active in Washington, serving on presidential commissions and supporting the political career of his wife, Elizabeth Dole, who served in the U.S. Senate from 2003 to 2007. In 2016, he endorsed Donald Trump’s GOP presidential candidacy. He also had something of a career in TV commercials for Viagra and Pepsi and became an occasional character on the cartoon show The Simpsons. He had been in declining health in recent years.

A native of Russell, Kan., Dole was a standout high school and college athlete who as a student at the University of Kansas in the early 1940s trained for an Olympic tryout. He first came to Washington in 1960 as a member of the House of Representatives, and won his first of five Senate elections in 1968. He emerged in the Senate as a strong partisan supporter of President Richard Nixon. 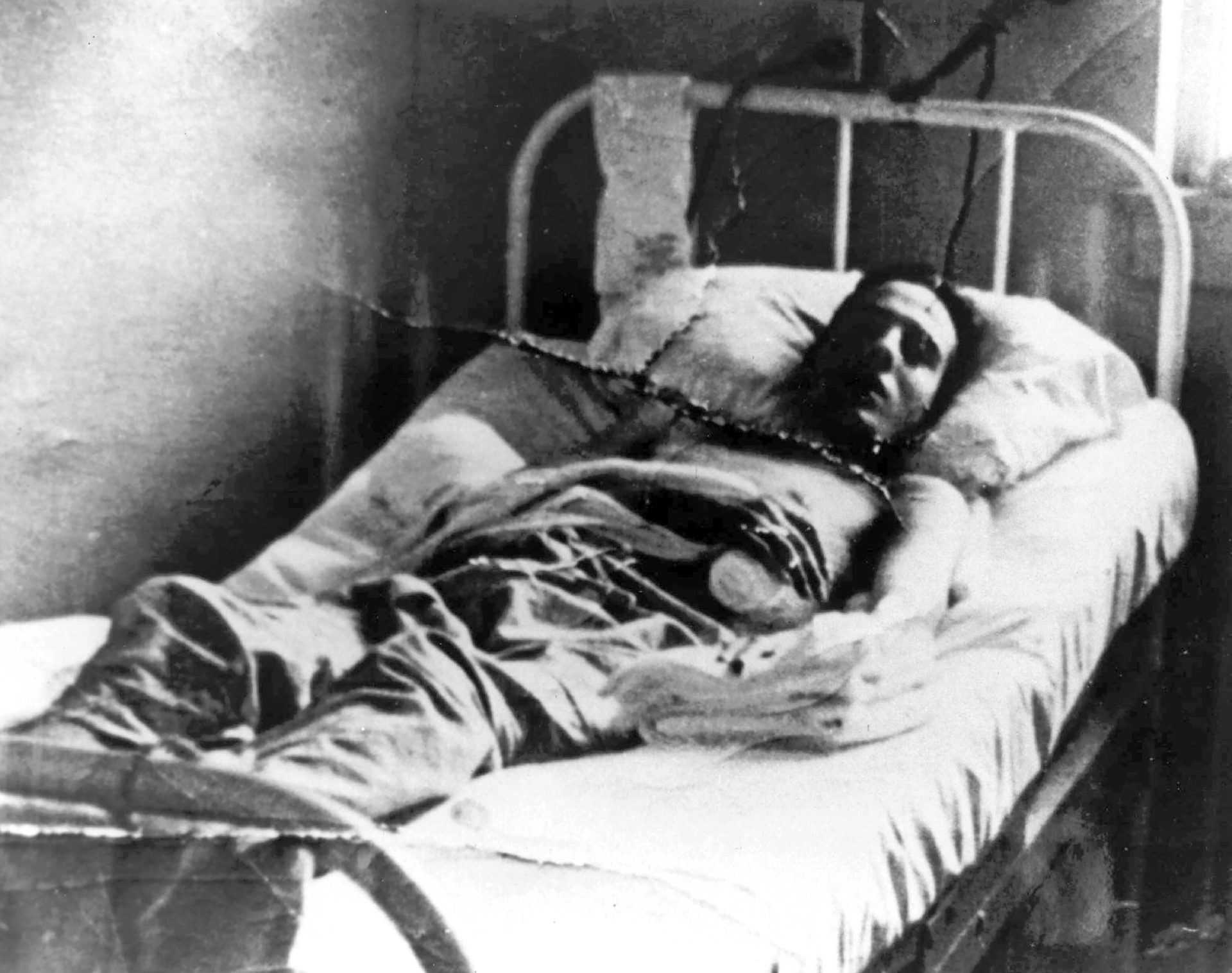 US Army via AP

This is a 1945 file photo of Sen. Bob Dole recuperating from injuries received while serving in Italy during World War II. Dole was critically wounded by shrapnel in April 1945 and spent months recuperating from his injuries at the Percy Jones Army Hospital in Battle Creek, Mich.

Dole’s legislative career spanned more than 30 years, and he figured in most of the great legislative battles of his era. But his congressional record was more successful than his electoral career. He remains the only person to be nominated for both president and vice president without attaining either office.

Along the way, he developed a reputation as a tough partisan — a hatchet man — serving in that role first for Nixon and then later as Ford’s running mate in 1976.

In a vice presidential debate that year, Dole offered this partisan take on World War I, World War II, Korea and Vietnam: “All Democrat wars, all in this century. I figured up the other day, if we added up the killed and wounded — Democrat wars in this century — it’d be about 1.6 million Americans. Enough to fill the city of Detroit,” Dole said.

Later, during his second try for a presidential nomination, in 1988, he lashed out in anger after a bitter New Hampshire primary loss to Vice President George H.W. Bush.

When asked by then-NBC Nightly News anchor Tom Brokaw whether there was anything he would like to say to Bush, Dole replied: “Yeah, stop lying about my record.”

“There was the Bob Dole who was the harsh Republican rhetorician, the one who in the 1976 vice presidential campaign referred contemptuously to ‘Democrat wars,’ the one who characterized Jimmy Carter as ‘Southern-fried McGovern,’ the one with the kind of snide comment — the sort of mean-spirited Bob Dole,” Baker said. “On the other hand, there was the man who increasingly became a Republican centrist.”

The ultimate ambition: the presidency

When it came to legislative strategy, Dole was an expert, recalls veteran political strategist Scott Reed, who worked with Dole for more than 20 years and managed his 1996 run for the White House.

Dole “knew how to wait till the end, hold his cards close to his chest, and then make the move — which wasn’t always the greatest skill when you were running for president,” Reed said.

No one knew this better than Dole himself. Having tried to run for president twice while keeping his day job in the Senate, Dole decided in 1996 to step down as majority leader and concentrate on his ultimate ambition. In his farewell speech, he said he was leaving the Senate with nowhere to go but the White House or home.

“And I will then stand before you without office or authority, a private citizen, a Kansan, an American, just a man,” he said. “But I will be the same man I was when I walked into the room, the same man I was yesterday and the day before, and a long time ago, when I rose from my hospital bed and was permitted by the grace of God to walk again in the world.

That speech was a rare reference to Dole’s grievous war wounds and long convalescence.

A dark sense of humor

Dole was known both for his wit and as a connoisseur of political humor, writing a book about it called Great Presidential Wit.

“However often we met, he always insisted on coming to my office,” Daschle said. “And I thought he was paying deference to me until one day, as I was walking him out of my office and told him how much I appreciated the fact that he kept coming to my office rather than asking me to come to his, he said, ‘Well if I come to your office, I can decide when the meeting’s over.’ That’s Bob Dole.”

Always deadpan, the Dole humor could also be a little dark. “You don’t want a bill sitting around too long,” he would say. “People might read it.”

On one occasion, when a Republican colleague cast a crucial vote while lying on his back on a hospital gurney, Dole said that particular senator “voted better under sedation.”

As often as not, the butt of his jokes was himself.

“I’ve probably had more health care than anybody in this room,” Dole said at a 2009 event on health care. “And apparently, it’s been successful, except for the mental part.”

Poking fun at himself

In retirement, he almost made a second career of poking fun at himself. He had a cameo on The Simpsons and appeared in a commercial with Britney Spears. Another commercial he made for Viagra was so famous that he made yet another one spoofing it for Pepsi.

“I’m eager to tell you about a product that put real joy back in my life. It helps me feel youthful and vigorous, and most importantly, vital again. What is this amazing product? My faithful little blue friend: an ice-cold Pepsi-Cola,” he said in the commercial.

In his post-Senate years, Dole worked again with Daschle, this time on the same side: at a law firm and at a bipartisan policy center they founded. Daschle reflected on the career that took Dole a long way from its beginnings as a partisan bomb-thrower.

“Bob Dole’s professional career gradually morphed into something far more substantive and far more complex,” Daschle said of his longtime adversary and colleague. “He has said on more than one occasion that the most successful moments of his career had to do with times when he reached across the aisle with Democratic senators and other leaders.”