Acting Assistant U.S. Attorney General Jeffrey Clark is under scrutiny for his role in former President Donald Trump's efforts to overturn his 2020 election loss. In this file photo, Clark is shown next to Deputy Attorney General Jeffrey A. Rosen during a news conference to announce the results of the global resolution of criminal and civil investigations with an opioid manufacturer at the Justice Department in Washington, Wednesday, Oct. 21, 2020.

Clark refused to answer questions about former President Donald Trump and his efforts to get the Justice Department to investigate false 2020 election claims, according to a deposition transcript. 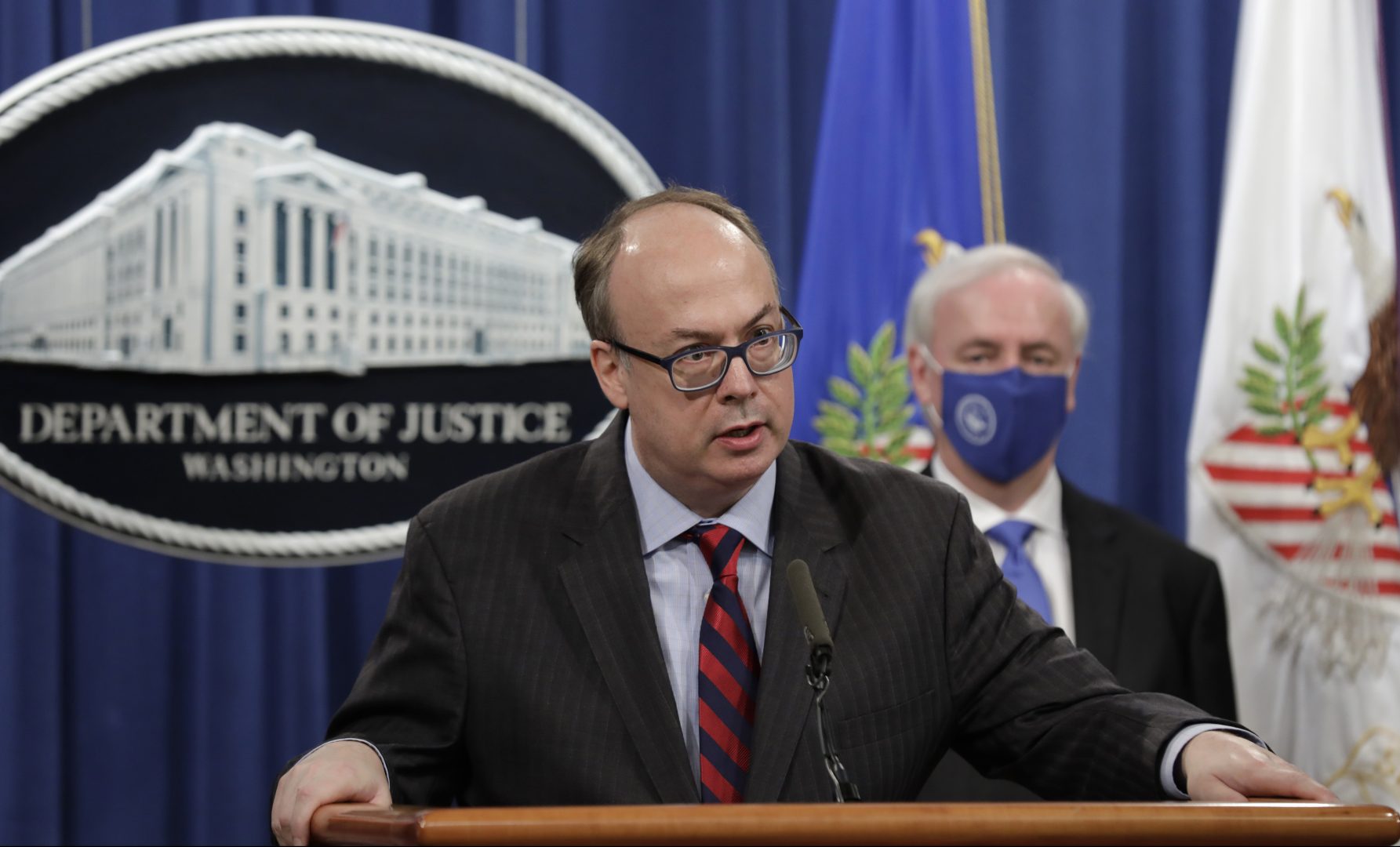 Acting Assistant U.S. Attorney General Jeffrey Clark is under scrutiny for his role in former President Donald Trump's efforts to overturn his 2020 election loss. In this file photo, Clark is shown next to Deputy Attorney General Jeffrey A. Rosen during a news conference to announce the results of the global resolution of criminal and civil investigations with an opioid manufacturer at the Justice Department in Washington, Wednesday, Oct. 21, 2020.

The panel said Clark, who had promised to pursue baseless election fraud claims, shirked his legal obligation to answer questions tied to the deadly insurrection.

The nine-member committee, made up of seven Democrats and two Republicans, voted unanimously in favor of the referral.

Committee Chair Bennie Thompson, D-Miss., said in remarks ahead of the vote: “He chose this path. He knew what consequences he might face if he did so. This committee and this House must insist on accountability in the face of that sort of defiance. We must honor the oath we took to support and defend the Constitution.”

Ahead of the vote, Thompson said Clark had requested the chance to come in and appear before the panel to assert his Fifth Amendment right against self-incrimination. Thompson said the committee will allow it on Saturday, but they were still moving forward with the contempt referral.

The move complicates the path forward, however. A panel vote would typically send the measure to the full House for a vote. If the chamber approved it, the referral would then be sent on to federal law enforcement to potentially pursue charges.

But the House may now be looking at an extended delay to resolve its next steps for Clark.

For now, the referral marks the second such case for the committee, after referring ex-Trump strategist Steve Bannon in October for defying a subpoena outright. Three weeks after the House approved the referral, Bannon was indicted by the Justice Department and is now fighting his contempt of Congress charges.

Clark and his attorney have not responded to requests for comment.

What is Jeffrey Clark’s role here?

In Clark’s case, he appeared with his attorney before the panel in early November, but said he was immune from answering their questions because of various arguments of legal privilege.

For example, Clark refused to answer questions about former President Donald Trump and his efforts to get the Justice Department to investigate false 2020 election claims, according to a deposition transcript. The committee has also noted that Clark’s former DOJ supervisors have appeared before the panel.

After that Nov. 5 meeting with the committee, Thompson said he rejected Clark’s claims, and noted he had a short window to reconsider or face the consequences.

Clark was a key figure in a recent Senate report detailing Trump’s attempts to enlist the Justice Department in his efforts to overturn the 2020 presidential election. That report includes details about U.S. Rep. Scott Perry, who represents Dauphin and portions of York and Cumberland counties, saying that Perry introduced Clark to Trump and vouched for Clark to the Justice Department.

The report said Clark proposed delivery of a letter to Georgia state lawmakers and others to push for a delay in certifying election results and recommended a press conference announcing the DOJ was investigating allegations of voter fraud, despite a lack of evidence.

Why the committee went this route with Clark

On Tuesday evening, the panel released more than a dozen exhibits in its contempt report for Clark, including the first publicly released transcript that shows his attorney rejecting responses on his client’s behalf because of executive privilege.

Clark attorney Harry MacDougald repeatedly told the panel his client would assert executive privilege and other immunity with respect to his testimony and documents.

“We do not intend to answer any questions or produce any documents today,” MacDougald told the panel at their Nov. 5 meeting.

MacDougald went on to say that Clark could also claim immunity through law enforcement and attorney-client privileges, as well as other legal shields.

“Mr. Clark finds himself in a position of having worked for a president who has asserted executive privilege, giving him a letter asserting executive privilege,” MacDougald said. “And therefore, as his lawyer, I can’t allow him to be exposed to the risk of guessing where that line is going to be drawn. And so, for now, we are standing on executive privilege.”

Since he declined to answer the panel’s questions, Clark faced challenges in his previous privilege claims, several legal analysts said.

Jonathan Shaub, a University of Kentucky law professor and a former attorney at the Justice Department’s Office of Legal Counsel, noted the Justice Department already authorized Clark to testify before the Senate Judiciary Committee (Clark ultimately did not agree to be voluntarily interviewed in that case).

Clark was a member of the Justice Department on Jan. 6 and not the White House, where executive privilege claims can protect presidential advisers. It’s also unclear if Trump directly told Clark not to cooperate with the Jan. 6 panel as he did with former White House Chief of Staff Mark Meadows and other advisers, Shaub said.

After some back and forth with the committee, Meadows has since said he’ll appear before the committee to answer questions.

For Clark, his attorney claimed Trump directed him not to cooperate in a letter, which was attached to a series of immunity claims shared with the panel. However, the committee disagreed, arguing Trump in fact greenlighted Clark’s testimony in that same Aug. 2 letter — sent on Trump’s behalf by attorney and former Georgia Republican Rep. Doug Collins.

MacDougald also confirmed he and his client were in receipt of a July letter from the Justice Department indicating that executive privilege does not apply to his immunity claims.

Norm Eisen, a former House impeachment lawyer, noted that by Clark at least declining to testify in person, he bought himself more time on a contempt referral than Bannon.

“Now, Clark to his credit showed up,” Eisen said. “When you show up — unless you have a legally valid reason not to answer questions — you have to answer the questions. And he didn’t.”

Eisen noted that Clark was somewhat in a similar boat as Meadows.

Roe v. Wade's future is in doubt after historic arguments at Supreme Court