After steadily improving throughout the season, Hurts took a huge step backward in Philadelphia’s 13-7 loss to the New York Giants on Sunday.

That won’t cut it in the NFL but the second-year pro has five games remaining to show the Philadelphia Eagles’ decision makers he can be their quarterback for the future.

After steadily improving throughout the season, Hurts took a huge step backward in Philadelphia’s 13-7 loss to the New York Giants on Sunday. Hurts had the worst game of his career in his 16th start. He tossed three interceptions, including two inside the red zone, and had a 17.5 passer rating.

“I put us in a bad situation with those turnovers I had in the first half and especially going in with the opportunity to ,get points before halftime, so none of those are good by any means, and that’s something we’ll have to overcome,” Hurts said. 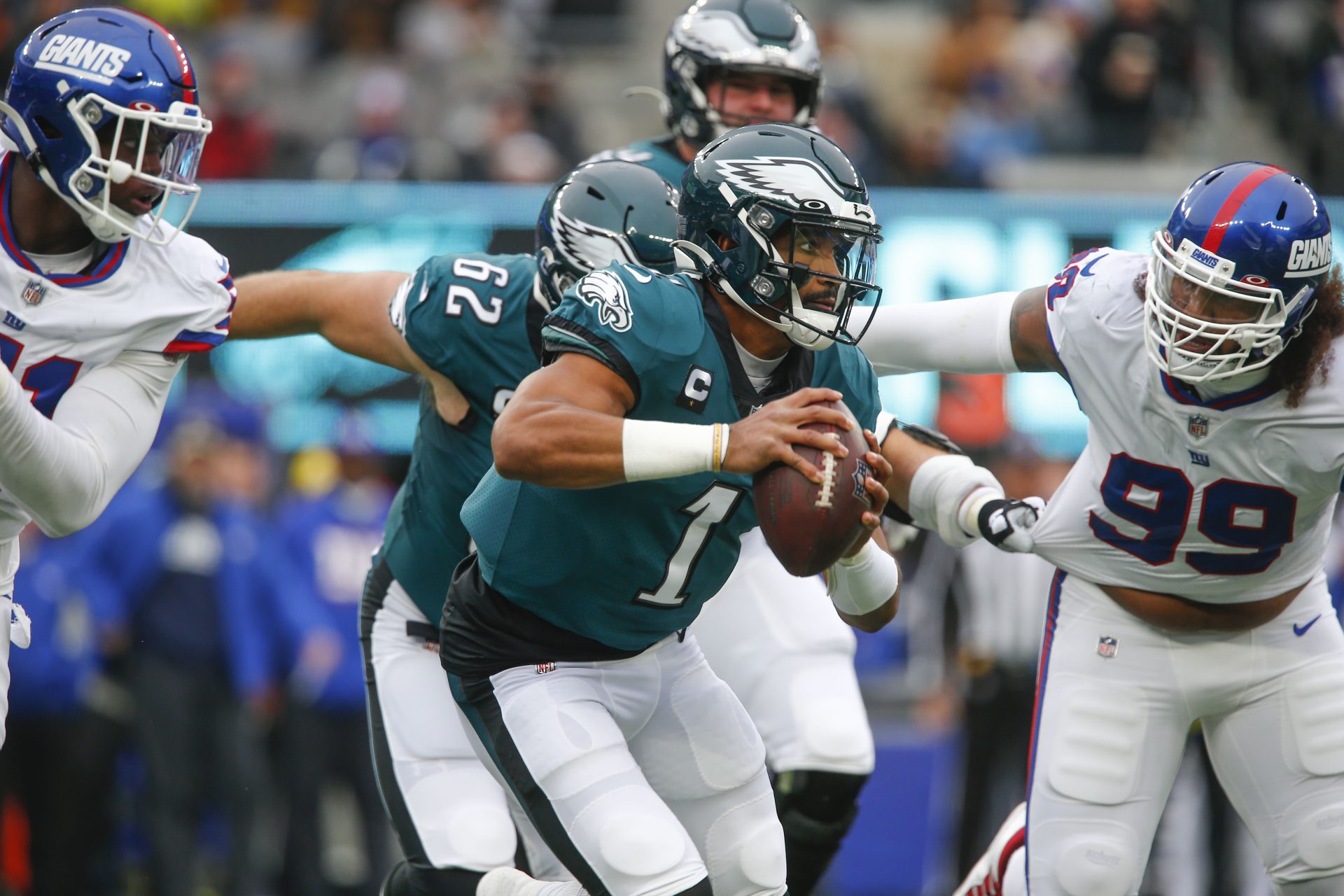 Philadelphia Eagles quarterback Jalen Hurts runs the ball during the first half of an NFL football game against the New York Giants, Sunday, Nov. 28, 2021, in East Rutherford, N.J.

The abysmal performance came in his biggest game with the Eagles (5-7) as they’re trying to make a playoff push. They were 4-point favorites over the Giants (4-7) and a victory would’ve put them in sole possession of the NFC’s third wild-card spot.

One awful game shouldn’t negate the progress Hurts has made this season, but it’s fair to question whether he can be the long-term answer for Philadelphia. The Eagles have had their best success with Hurts when the run game is working. They had 208 yards rushing against the Giants but couldn’t overcome four turnovers.

“We’re not where we want to be in that part of our game,” rookie coach Nick Sirianni said of the passing offense. “We’re working like crazy to get better at it. I think what you’ve seen is our play-action game has been able to be successful, but when teams know we’re dropping back and when we’re dropping back to pass, that’s where we’ve struggled in the third-and-longer scenarios.

“So, that’s an emphasis that we know we got to get better at because we know if we want to win the games we need to win. … when we need to pass the ball, we’re going to have to succeed at doing so. That starts with the drop-back passing game is where we need to get better.” 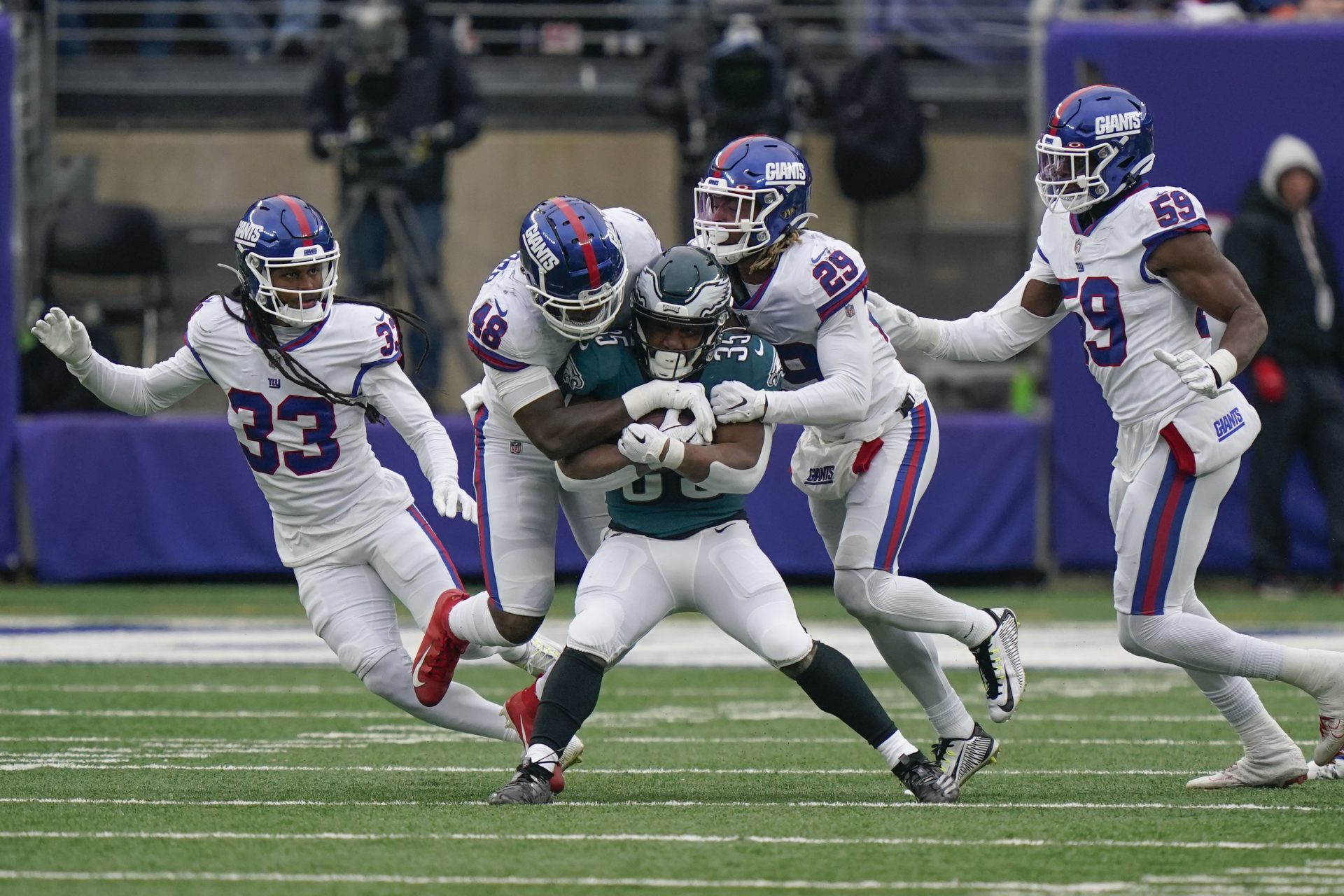 Hurts has to avoid turnovers inside the red zone. He did an excellent job the first 10 games.

Linebacker Alex Singleton had 12 tackles, including three for a loss, in his return to the starting lineup filling in for Davion Taylor.

Wide receiver Jalen Reagor couldn’t make two catchable grabs on the final drive when the Eagles drove to the Giants 27. The 2020 first-round pick had two receptions for 31 yards after making only four catches for 5 yards the previous four games.

Hurts is dealing with an ankle injury. … Right guard Jack Driscoll will miss the rest of the season with a high ankle sprain. … Sirianni is optimistic about running backs Miles Sanders (ankle) and Jordan Howard (knee). … Center Jason Kelce missed part of the game against the Giants with a knee injury but returned to finish.

5 — Hurts has five games with a completion percentage below 55%.

The Eagles return to MetLife Stadium to face the New York Jets (3-8) on Sunday. Rookie quarterback Zach Wilson led the Jets to a 21-14 win at Houston in his first game back after a sprained right knee forced him to miss four games.