A Pittsburgh Steelers fan wears a Terrible Towel on his head as his team loses to the Cincinnati Bengals in an NFL football game, Sunday, Nov. 28, 2021, in Cincinnati.

Steelers search for answers after blowout by Bengals

"There's a level of respect and tradition that’s been set when you put on that Steeler uniform. We didn’t do any of those things today."

(Cincinnati) — A 41-10 thrashing at the hands of the division rival Bengals has the Steelers in line to miss the playoffs for the third time in four years. It wasn’t so much that Sunday’s loss happened as how it happened.

The Steelers (5-5-1) were beaten in the trenches and outrushed 198 yards to 51. It hasn’t happened often when the Bengals were the more physical team in this rivalry, but that was the case on Sunday at Paul Brown Stadium.

“There’s a level of respect and tradition that’s been set when you put on that Steeler uniform. We didn’t do any of those things today,” Cam Heyward said.

Or in recent weeks. The Steelers’ defense has allowed 722 yards rushing in the past four games, an average of 180 per game. On Sunday, Joe Mixon had 117 of his 165 yards in the first half. Pittsburgh allowed 229 rushing yards in the tie against the Lions three weeks ago, and things haven’t improved a whole lot.

“We haven’t been able to do anything in stopping the run. It’s absolutely embarrassing,” T.J. Watt said. “It’s nothing for us to be proud of. It’s AFC North football. We have to continue to turn the page no matter how good or bad we play and just continue to work.” 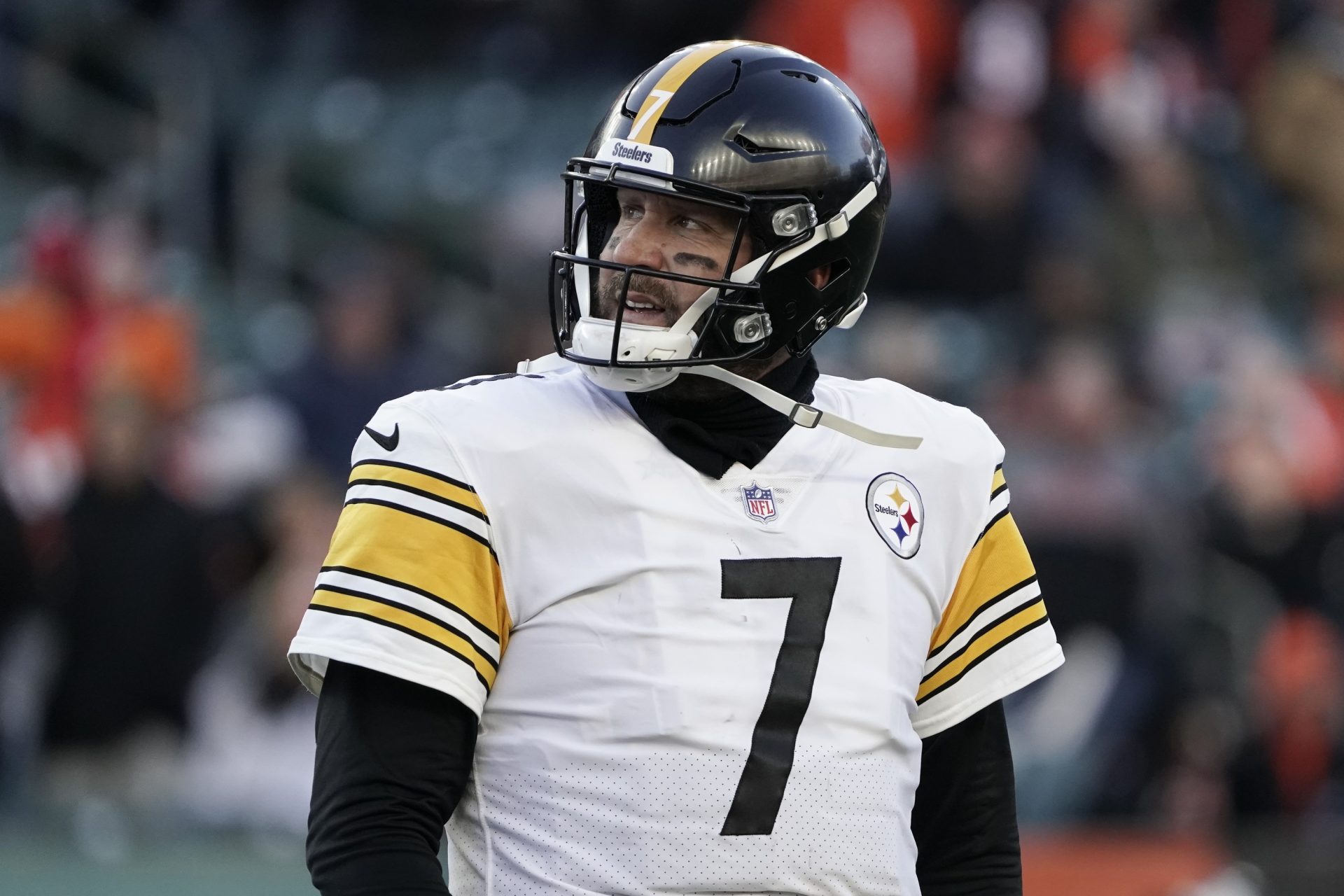 Pittsburgh Steelers quarterback Ben Roethlisberger (7) looks up toward the scoreboard as he leaves the field after losing to the Cincinnati Bengals in an NFL football game, Sunday, Nov. 28, 2021, in Cincinnati.

With Sunday’s win, the Bengals (7-4) completed their first regular-season sweep of the Steelers since 2009.

The Bengals-Steelers rivalry has had its share of trash talking and altercations. But under third-year head coach Zac Taylor, the Bengals mostly have let their performances do the talking. Taylor improved to 3-3 against the Steelers; Cincinnati, which lost 11 straight to the Steelers, has now beaten them three straight times.

“Our goals go through this division,” Taylor said. “It feels pretty dang good to go 2-0 against a team in our division.”

It was a painful Sunday for Pittsburgh, in particular for Ben Roethlisberger, who threw two interceptions and was sacked three times. One of those picks was returned 24 yards for a touchdown just before halftime by former Steeler Mike Hilton. Roethlisberger completed 24 of 41 passes for 263 yards.

“We’re going to come in (Monday) to meet and talk about it,” Roethlisberger said. “It’s tough. We’re in crunch time. It’s against a divisional opponent. You needed to come out and play well, and we didn’t.”

Tomlin stressed the importance of Sunday’s game throughout the week, with it being on the road against a division opponent and leading into next week’s game against the Baltimore Ravens at Heinz Field. So was he surprised how poorly his team performed?

“Certainly,” Tomlin said. “Credit to those guys. They did the things required in a game like this and we didn’t. We got beat up front on both sides of the ball. When you lose the scrimmage, games can look like that. We seek no comfort. We stunk it up today.”

Tomlin said his team lost most of its one-on-one matchups on Sunday and that he was open to making any changes necessary to fix the issues. After allowing 41 points for the second straight week, the Steelers insist their problems are fixable.

But with only six games left, time is running out.

“The AFC is still open,” said Roethlisberger. “Obviously, we didn’t do ourselves any favors. Games like this show a lot about a team’s character, your heart. Do you continue to fight, and fight for each other? Do you bounce back? That’s the key.”