People pass through Waterloo train station, in London, during the morning rush hour, Monday, Nov. 29, 2021. The new potentially more contagious omicron variant of the coronavirus popped up in more European countries on Saturday, just days after being identified in South Africa, leaving governments around the world scrambling to stop the spread. In Britain, Prime Minister Boris Johnson said mask-wearing in shops and on public transport will be required, starting Tuesday.

As Omicron spreads, studies suggest that travel bans alone don’t do much good

(Washington) — When the Omicron variant of COVID-19 was first identified in South Africa, the country’s scientists were quick to inform global health leaders of the new mutations they had found.

Though scientists have little information about the new variant and aren’t certain where it originated, several countries, including the United States, Canada, the United Kingdom, and the European Union announced almost immediate travel bans from South Africa and other southern African nations.

Japanese prime minister Fumio Kishida announced Monday the decision to reestablish entry rules for foreign travelers to limit any potential spread of the Omicron variant. This comes just weeks after the country reopened its borders on Nov. 8.

Kishida told reporters this step is a “temporary measure until information about the Omicron variant becomes clear.” 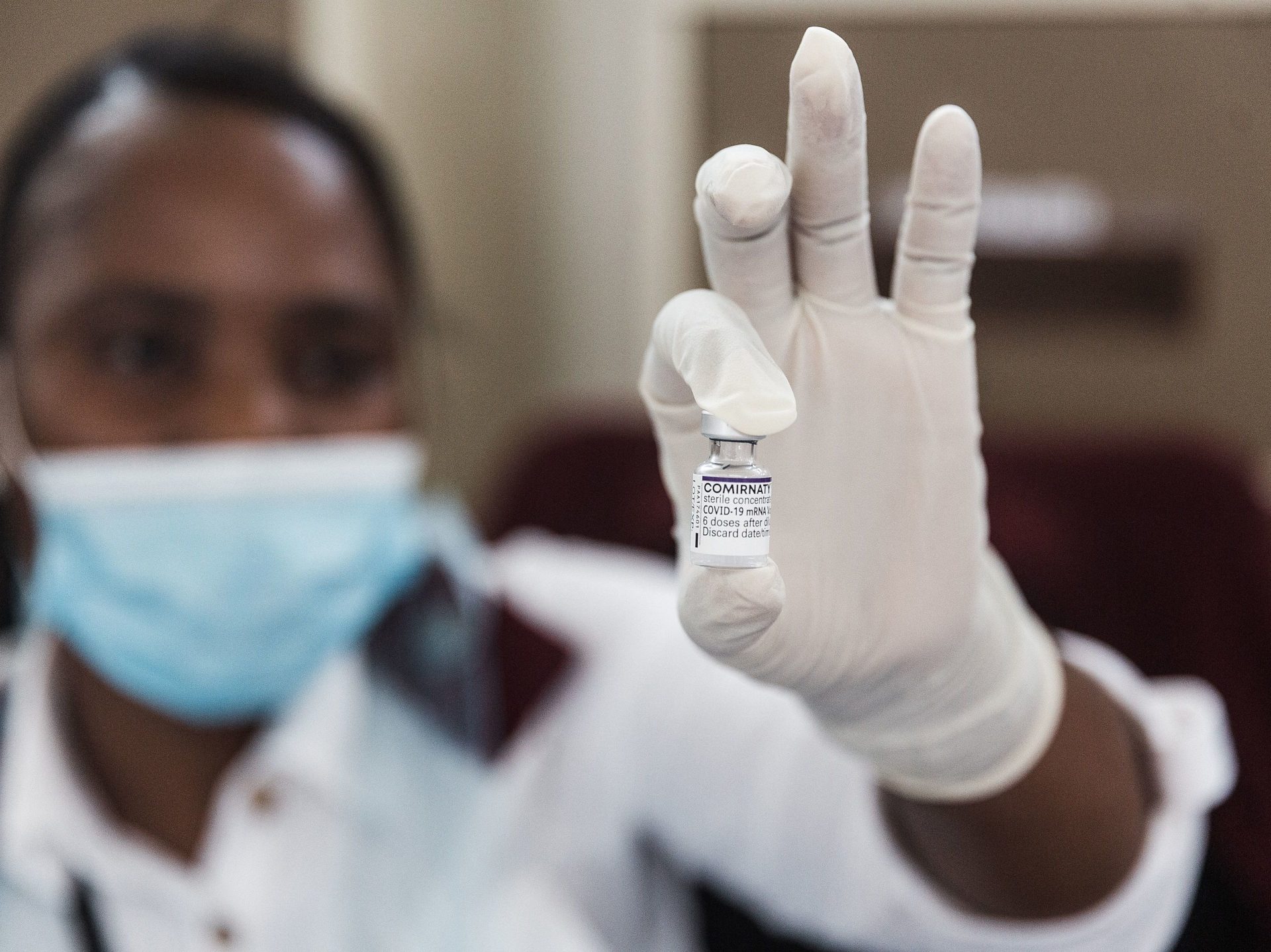 A vile containing Pfizer vaccine to be administered is seen ahead of the launch of the VaxuMzansi National Vaccine Day Campaign at the Gandhi Phoenix Settlement in Bhambayi township, north of Durban , on September 24, 2021.  (Photo by Rajesh JANTILAL / AFP)

Israel also implemented a blanket ban to all foreigners Sunday night after initially establishing restrictions on travelers just from southern African countries. According to The Jerusalem Post, under this new policy anyone returning from any country — vaccinated Israelis included — will need to isolate for three days once in the country.

The restrictive measures around the world sparked outcry from some health officials and experts who caution the bans are premature and could set a harmful precedent.

“There is very little utility of these kinds of bans,” Saad Omer, director of the Yale Institute of Global Health, told NPR.

And even though the Omicron variant has been reported in several other countries in Europe, Asia and North America, travel bans are largely being imposed on southern African countries.

One of the identified cases of the Omicron variant in Belgium had no contact or travel with any nations in southern Africa, suggesting community spread could already be taking place.

“If the question is to prevent the variant from coming in, it really doesn’t make sense to exempt countries where it has been identified and that has even more direct flights than southern Africa,” Omer said.

Travel bans from the start of the COVID-19 pandemic resulted in economic and other consequences we’re still seeing today.

A recent study from the journal Science shows that restricting international travel in the beginning stages of the COVID-19 pandemic did have some effect on delaying spread, but the researchers said restricting travel is only truly effective when paired with curbing the spread of infection through hand-washing, isolation and early detection.

Another study, in the Journal of Emergency Management, concluded that little evidence exists to prove that international travel bans are effective in controlling the spread of infectious disease, and such measures should only be taken if recommended by the World Health Organization. With the Omicron variant, the WHO has already cautioned against imposing travel bans.

Introducing a travel ban can also give a false sense that the virus is being contained, researchers said, adding that such policies can also make it difficult to transport health care workers and other resources.

Additionally, the stigma of travel bans can exacerbate racism and xenophobia, according to Nicole Errett of the University of Washington, who was the lead author on the Journal of Emergency Management study. 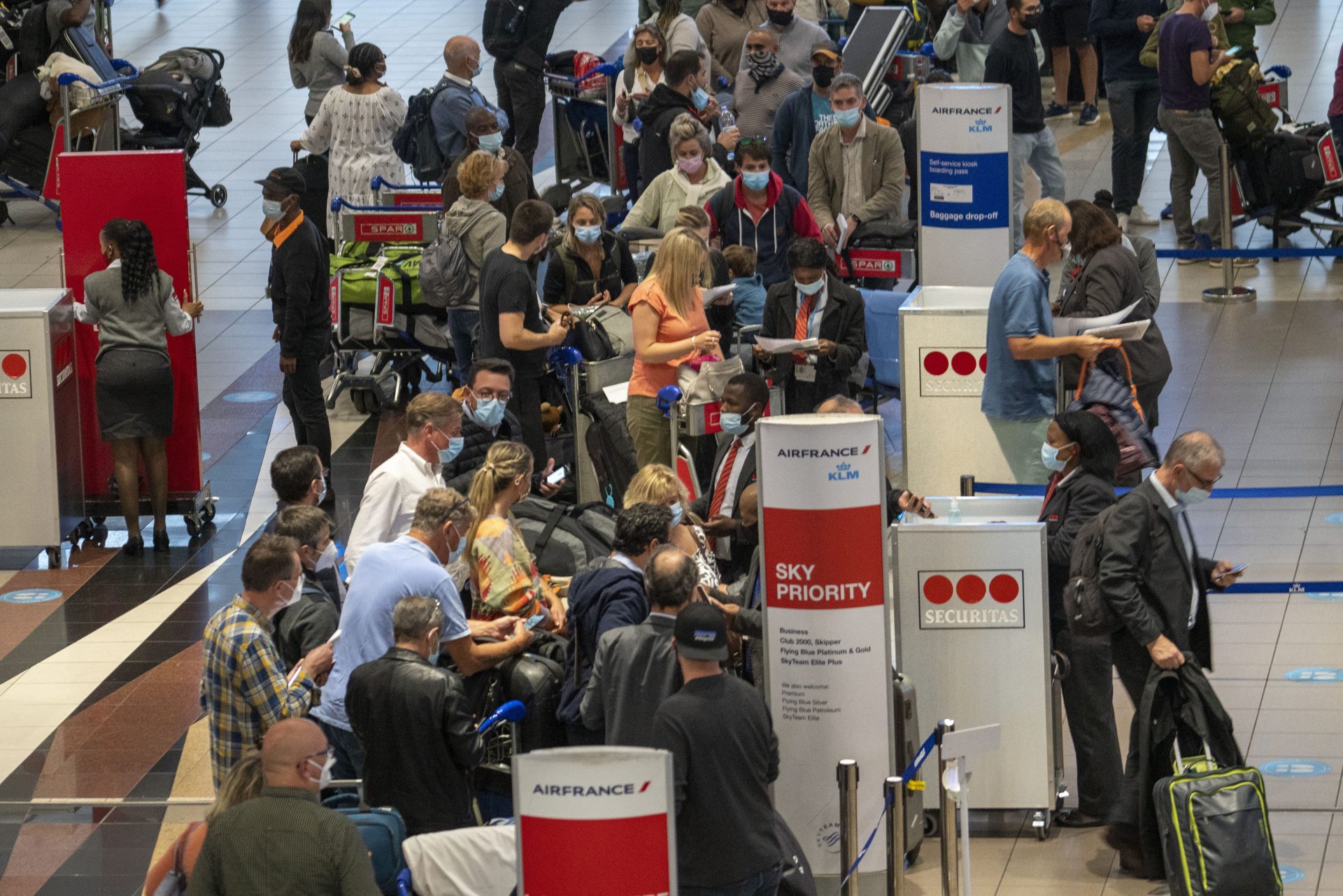 People queue to get on the Air France flight to Paris at OR Tambo’s airport in Johannesburg, South Africa, Nov. 26, 2021.  (AP Photo/Jerome Delay, File)

Omer, of the Yale Institute of Global Health, has another concern about implementing travel bans during a public health crisis: It can dampen the commitment to scientific transparency.

When countries that are proactive about disclosing the circulation of a virus are hit with travel restrictions, he said, that undercuts the case for health officials to be forthcoming about what’s happening in their countries.

“You don’t want a situation where, a month from now, a country health minister … gets a result of sequenced virus and they say, ‘OK, if it is that widespread, it’s going to come out anyways from some other country, why be the first one?’ And that cycle starts,” said Omer.

Addressing vaccine inequity around the world is the best way to stop these new variants from emerging, Omer said.

“If there are more transmission events going on with every hour, with every day, with every week, the likelihood of a variant emerging goes up,” he said.

And one of the most effective ways to address inequity, Omer said, is to allow for all regions, low-income countries in particular, to produce their own vaccines.

It’s too early to tell whether the Omicron variant in particular will become a serious public health threat, Omer added, “but that doesn’t mean that we are not playing with fire by by letting vaccine inequity continue.”