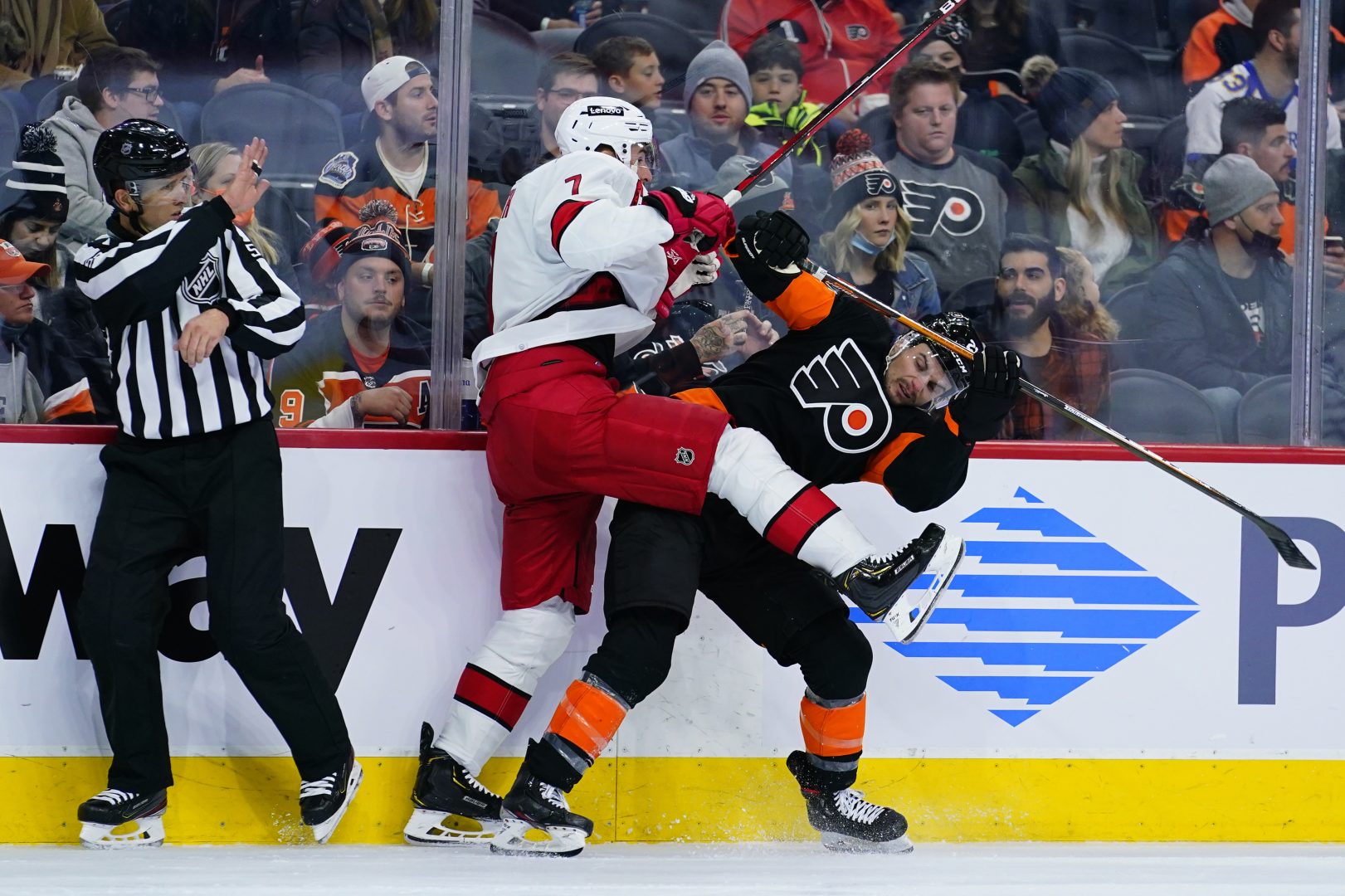 (Philadelphia) — Sebastian Aho scored twice, Jesperi Kotkaniemi had a goal and an assist and the Carolina Hurricanes beat the Philadelphia Flyers 6-3 on Friday.

Ivan Provorov, Joel Farabee and Rasmus Ristolainen scored for Philadelphia. The Flyers have lost five in a row.

The Hurricanes took control by outscoring Philadelphia 4-1 in the second period.

Aho scored his second of the contest and team-leading 10th of the season 23 seconds into the period to tie it at 2. He raced across the blue line and fired a wrist shot that deflected off Ristolainen’s stick and high over goalie Carter Hart.

The Flyers went up 3-2 1:16 into the second on Ristolainen’s first since being acquired in the offseason. His hard slap shot beat Antti Raanta on the glove side.

But Carolina answered 29 seconds later when Fast converted a tying goal on a rebound, and the Hurricanes went ahead for good with 5:48 remaining in the second on a beautiful, tic-tac-toe play with Kotkaniemi finishing from close range after passes from Seth Jarvis and Tony DeAngelo.

Lorentz capped the offensive outburst for Carolina, making it 5-3 with 3:38 to play in the second by scoring another pretty Carolina goal from close range.

Raanta preserved the two-goal advantage with a stellar pad save on Connor Bunnaman on a 2-on-1 with 2 1/2 minutes left in the period.

Provorov opened the scoring 50 seconds into the contest. Claude Giroux’s pass through the crease went through Philadelphia’s Sean Couturier and Carolina’s Jordan Staal to the other side, where Provorov was wide open for a wrister. Carolina coach Rod Brind’Amour challenged the goal, saying that Couturier interfered with Raanta, but the officials upheld the goal after video review.

Aho scored his first with a wrist shot from a sharp angle that went over Hart’s left shoulder.

Farabee scored his second in two games and sixth of the season, deking past Seth Jarvis with a fake slap shot and then finishing with a wrist shot through Raanta’s legs for a short-handed goal with 2:58 to play in the period that gave Philadelphia a 2-1 lead.

DeAngelo, who grew up a Flyers fan in his hometown of nearby Sewell, New Jersey, had a pair of assists while upping his points streak to four consecutive games.

The Flyers continued their tradition of a Friday afternoon game on Black Friday. The contest marked the club’s 22nd such contest since 1997, with 20 of those being played in Philadelphia.

Flyers: At New Jersey on Sunday.

Yes, we are shopping way more than ever