Kym Ramsey had to close the infant room at her Montgomery County child care facility because of a staffing shortage.

The shortages, caused by low wages and razor-thin profit margins, have ripple effects that reach far beyond the classroom and affect everyone.

(Harrisburg) — Baby giggles and occasional cries are supposed to spill from the infant room at The Willow School, where lyrics from “Twinkle, Twinkle, Little Star” line the wall. But the mattresses propped up in cribs here haven’t nestled any little heads in some time.

Before the coronavirus pandemic, this room was a daytime home to eight children and required the highest number of workers — one for every four sets of squishy little cheeks — to ensure diapers were changed, naps were taken, and everyone stayed safe.

The room never really earned a profit, but it got kids in the door, said Kym Ramsey, CEO of the school. Families often stuck with her Montgomery County center, which she founded in 2012, and as the infants grew older, they moved into bigger rooms that required fewer workers.

But 20 months since the first reported coronavirus cases in Pennsylvania, Ramsey still hasn’t reopened the infant room, along with a few others. She’s reduced hours, opening later in the morning and closing earlier in the evening, and can care for fewer children. Her enrollment was 55 children earlier this month — down from about 110 before the pandemic.

“We have a waiting list, but no staff,” Ramsey said.

Hundreds of millions of dollars in federal stimulus money helped keep many of Pennsylvania’s 6,800 child care programs in Pennsylvania afloat as they dealt with stay-at-home orders, reduced enrollment, and increased cleaning and safety costs. And with a roughly $2 trillion social spending plan moving through Congress, transformational change could be on the horizon.

But right now, an industry pivotal to Pennsylvania’s economic recovery is facing severe staffing shortages, in part because stimulus money is not seen as a sustainable source to support higher wages. In a survey released in September of 1,100-plus Pennsylvania programs, more than half reported having to close at least one classroom. Roughly 26,000 children were on waiting lists.

There were 7,100 fewer workers in child care services in the state in August 2021 compared to two years earlier — a decrease of 15%. A few thousand more workers entered child care jobs in September and October, but the industry is still recovering more slowly than the rest of Pennsylvania.

The inability to attract and retain workers has serious ripple effects that reach far beyond the classroom, as parents shuffle their work schedules to deal with shorter hours and face tough decisions about how to care for their children without losing a paycheck. If they have to call out of work, that can affect business productivity and contribute to the supply-chain squeeze.

“There’s always that question of what’s going to happen next?” said Erika Peterkin, a 37-year-old mother whose family pays almost $1,000 a month for child care in Bucks County.

Last school year, Peterkin and her husband, a truck driver, had to piece together gaps in child care coverage, relying on multiple people to bring their kids to and from school and child care programs. 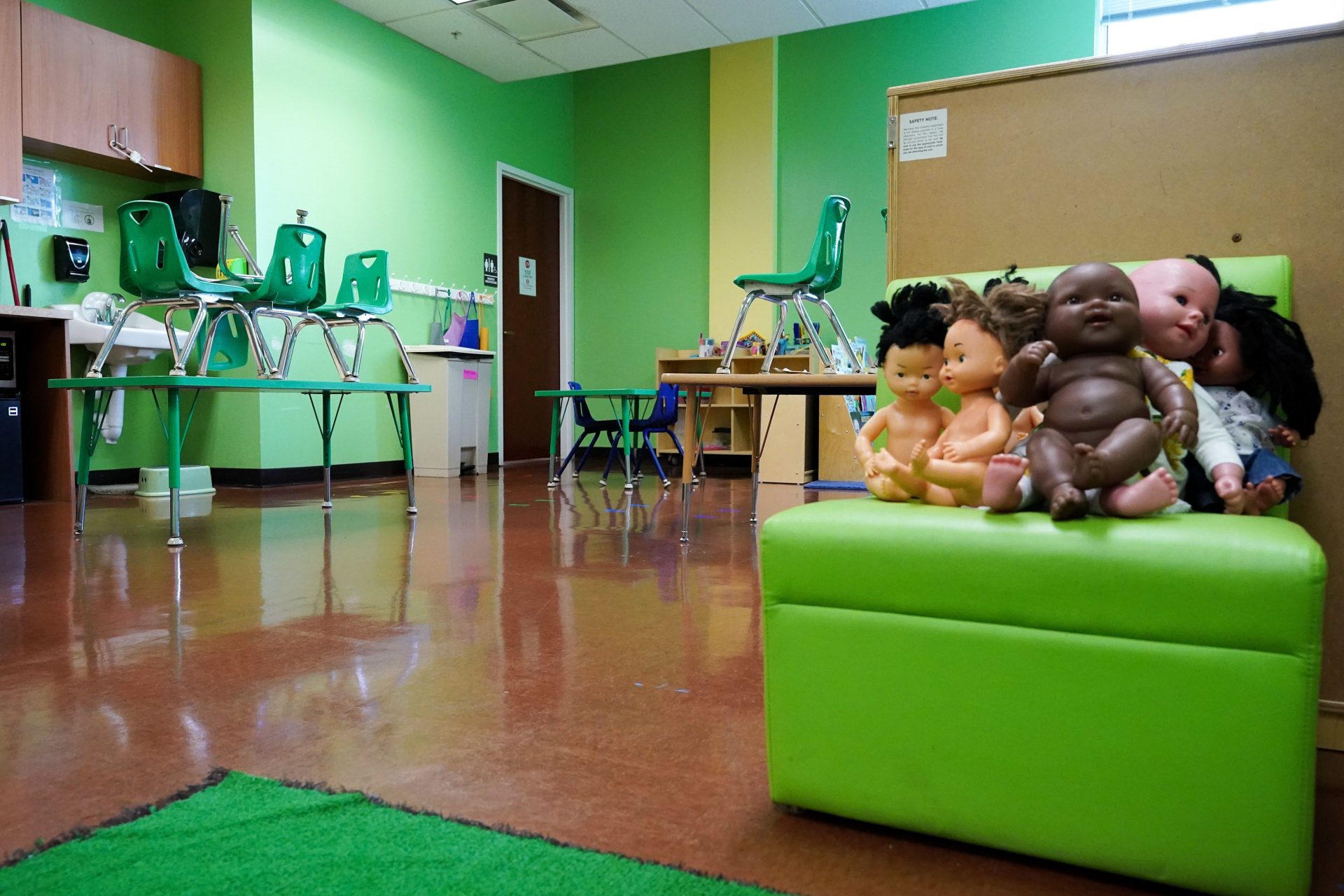 A classroom not in use at The Willow School, which is serving about half as many kids as it used to because of a staffing shortage.

Earlier this year, Peterkin found out her daughter’s child care center would open at 7 a.m. — a half-hour later than before and the same time her shift starts as a secretary for an emergency room. She was able to qualify for federal protections that allowed her to reduce her hours while keeping her job safe.

Now, on workdays, Peterkin drops her 6-year-old son off at his before-school program, which opens at 6:30 a.m. Then she drives to her daughter’s center and waits for the doors to open. She arrives at work by 7:30 a.m. — and hopes the center doesn’t reach out with any unexpected news about a coronavirus case.

“Every time the school calls, you’re just like ready to freak out,” Peterkin said.

A center owner in Allegheny County, who wants to reopen a preschool program, told Spotlight PA she pays herself about $12 an hour. A center director in Erie County said low wages meant some employees had to rely on public assistance benefits. A center owner in Westmoreland County said Burger King hired her 16-year-old son recently at $13 an hour — about $3 more than what she would be able to offer some new hires.

In Warren County, 38-year-old Brandilyn Lyon considered returning to child care work this month after losing a job teaching English as a second language online. But the low pay kept her away.

“It’s very emotionally taxing,” Lyon said of child care work. “It was not worth it to me to put myself through that for $12 an hour.”

Child care had a broken business model before the pandemic.

Costs can rival mortgage or rent payments, forcing some parents to decide whether it’s worth it to spend their days away from their kids, only for much of their paycheck to go toward child care. Lower-income families are helped by government assistance, but that often doesn’t cover the true cost of providing care, putting the pinch on providers, said Jen DeBell, executive director of the Pennsylvania Association for the Education of Young Children.

The goal was to stabilize the industry, so parents could return to work. And by some measures, it worked. Overall, Pennsylvania had about 280 fewer licensed child care providers in October 2021 than at the start of the pandemic, state data shows. And industry leaders think that the number would have been much higher without help.

Licensed child care centers — programs that can serve a large number of children, like Ramsey’s in Montgomery County — fared better than other types, especially small providers that operate out of their homes. Those smaller providers often serve outer suburbs and rural areas, offer nontraditional hours, and are settings where some families feel more comfortable taking infants and young toddlers, said Tracey Campanini, deputy secretary of the state’s Office of Child Development and Early Learning.

Campanini said it’s not clear whether those providers closed because of challenges in the industry or if they had specific concerns about bringing children into their homes because of the coronavirus.

Among the programs that are open, staffing shortages prevent them from serving as many students as they could before the pandemic.

“Child care providers are really willing to ramp back up and enroll families that are seeking care, but they are having a difficult time recruiting,” Campanini said.

“Every program we talk to is seeing an impact regarding the staffing problem,” DeBell said.

On a recent night, parents arrived at Kidsville Junction Childcare & Preschool in southern York County to pick up kids. Inside the center, located a few miles from the Maryland border, classrooms have train-themed names like Precious Cargo, Little Whistles, and Little Engines.

“It was a very difficult time, and very expensive, because I was sending them somewhere very overpriced,” Dell said. “Now, things are starting to seem a lot better.”

Earlier this fall, federal stimulus money allowed Kidsville Junction to expand its hours. It returned back to the 6:30 p.m. closing time it had before the pandemic began.

“That means everything to me,” said 32-year-old Dakota James, who works for an auto parts distributor. “It’s phenomenal for me because it’s a full day.”

Other parents said they appreciated the extra hours, whether it meant they could work more at their own jobs, have extra time to run an errand, or no longer have to worry about arriving late for pickup. But the center’s owner, Shirl Quinan, said recruiting workers is a constant struggle.

“And keeping them happy has been also hard because it’s so much work now with the extra cleaning and the extra everything,” Quinan said. “Parents are extra stressed. Staff is also stressed.”

A few months ago, Quinan lost two employees to convenience stores: one to Rutter’s, another to Royal Farms. She’s adjusted. Two years ago, the standard starting rate for someone without a college degree was $10 an hour at Kidsville Junction. Now, it’s $15 an hour. She also raised what she charges per child by about $7 a week, and she worries she may have to increase fees again after the federal stimulus money ends. 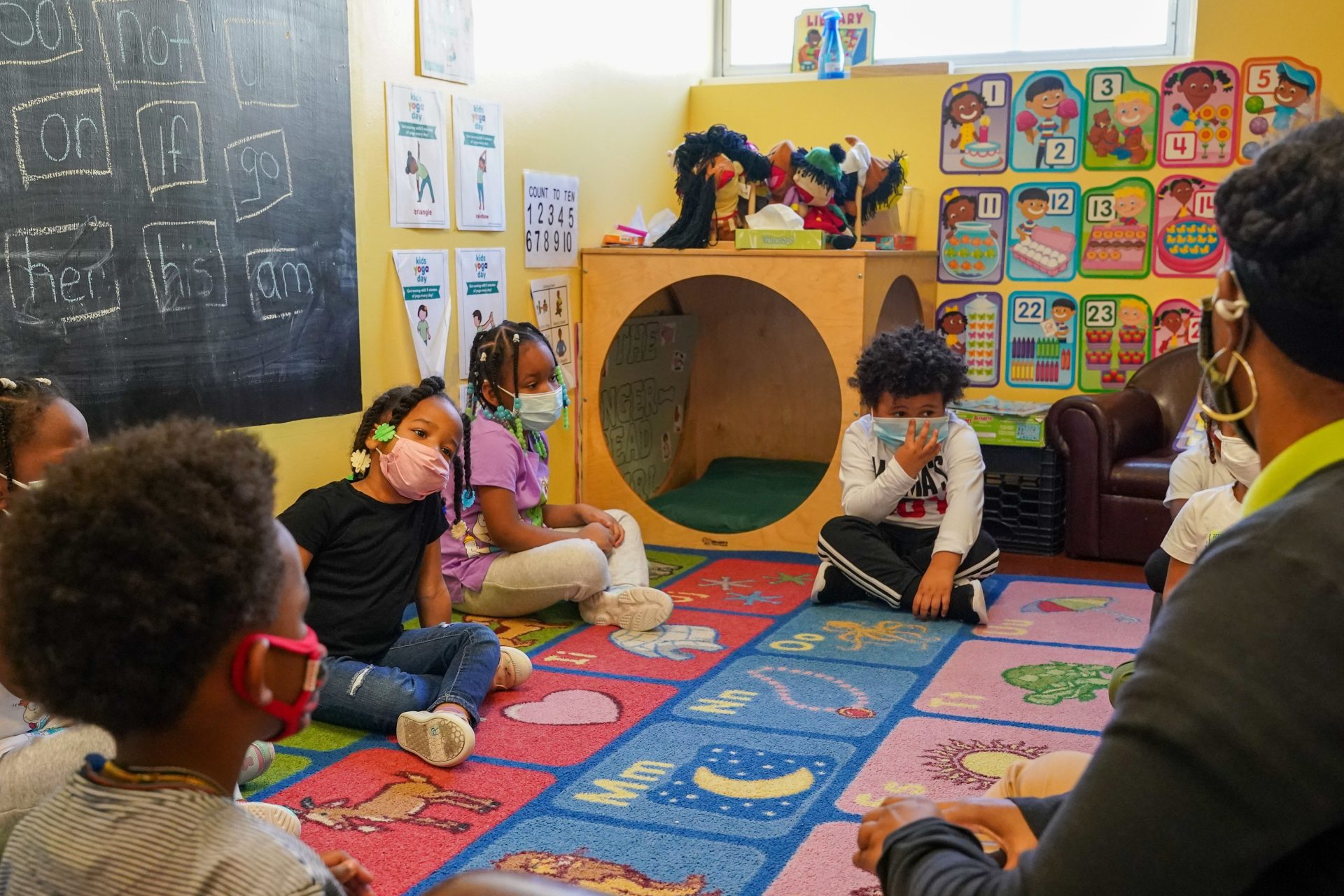 Tanisha Baylor (right) during “circle time” with the 4-year-old students under her care at The Willow School. The Montgomery County center for children has been significantly impacted by staffing shortages.

This fall, the Wolf administration announced how it plans to spend most of the $1.2 billion that the American Rescue Plan Act, passed in March under President Joe Biden, provides for child care in the state. About $352 million will support Child Care Works — a subsidy program that helps low-income families pay child care fees — by increasing rates to providers, reducing copayments for families, and incentivizing nontraditional hours.

Those changes go into effect in January.

The Wolf administration is using a larger pot of money, $655 million, to provide one-time grants for child care providers. Providers could use the money for sign-on bonuses and pay increases, but they have other options, including rent or mortgage payments, insurance, equipment and supplies, and mental health services for children and staff.

Diane Barber, executive director of the Pennsylvania Child Care Association, said she’s spoken with some program leaders who are interested in using the money for workers. But she said some worry about how they’ll afford raises in the long-term, and even raises have their limits.

At The Willow School in Montgomery County, Ramsey said federal assistance allowed her to raise pay for employees in November, and she’s planning to offer a 401(k) match of 3% in January. She hopes it makes the workers feel appreciated.

“It’s better than nothing, right? So I think it will help,” Ramsey said. “But if it will keep them and retain them, I can’t promise you that.”

There’s something even more transformative on the horizon.

Biden’s roughly $2 trillion social spending and climate proposal — known as Build Back Better — promises universal preschool for all 3- and 4-year-olds, and offers subsidies aimed at ensuring most working families don’t spend more than 7% of their income on child care. It also promises to raise wages.

The U.S. House passed the package in November. The plan’s fate is uncertain, but top Democrats in the Senate want to get it over the finish line by Christmas.

“It would be enormous,” said DeBell. “For those of us who have been doing this for a long time, this is what we’ve all been waiting for.”