Student teacher Olivia Vazquez, standing, left, speaks with a student at the Eliza B. Kirkbride School in Philadelphia, Wednesday, Oct. 20, 2021. Vazquez is finishing up her last semester at Swarthmore College and hoping to help make sure immigrant students arriving in Philadelphia have a more supportive experience in school than she did growing up.

Language barrier: Immigrant parents in Pennsylvania and other states tell tales of exclusion

The offered stories of students being used as translators despite federal prohibitions, incorrect telephone translations or poor communication when their children were being bullied. 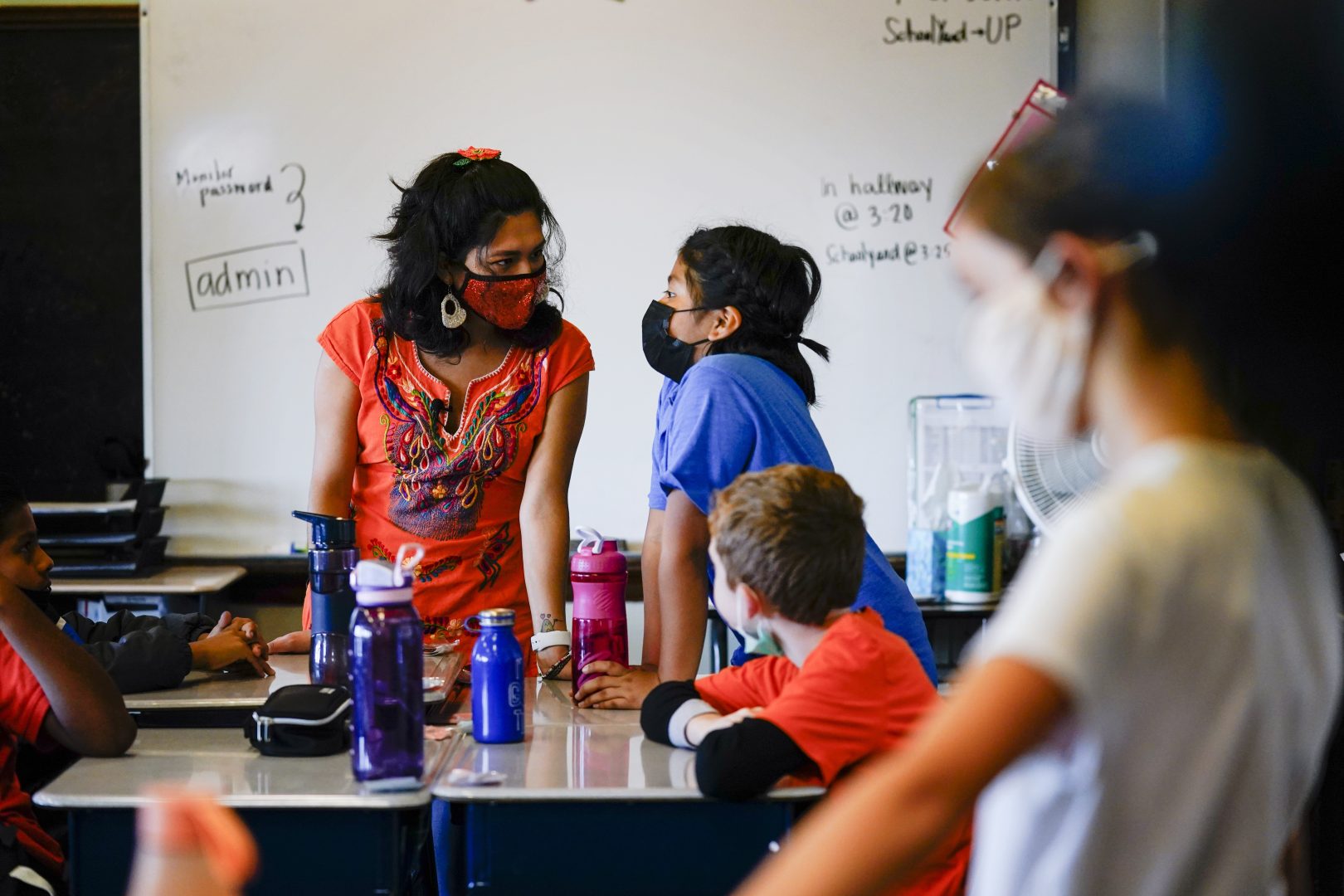 Student teacher Olivia Vazquez, standing, left, speaks with a student at the Eliza B. Kirkbride School in Philadelphia, Wednesday, Oct. 20, 2021. Vazquez is finishing up her last semester at Swarthmore College and hoping to help make sure immigrant students arriving in Philadelphia have a more supportive experience in school than she did growing up.

(Philadelphia) — Philadelphia parents who don’t speak English say they’ve long been excluded from parts of their children’s education because of language barriers, an issue that’s only been exacerbated by the pandemic and the return to in-person learning.

Parents told The Associated Press stories of students being used as translators despite federal prohibitions, incorrect telephone translations or poor communication when their children were being bullied. Experts said Philadelphia is not alone, noting that many school districts have lagged in creating systems that treat non-English speakers equally rather than responding to complaints.

Philadelphia school district officials said the district has made a lot of progress in recent years, including sending communication in parents’ languages and hiring dozens of additional in-school interpreters called bilingual cultural assistants, or BCAs. They said the district has policies against using children as translators and robust guidance on how to request language help.

Mandy, who asked the AP not to use her last name, has a 10-year-old son with special needs. She struggled with whether to return him to in-person schooling, but ultimately decided the virtual option didn’t offer enough support for parents who don’t speak English.

Mandy said her biggest struggle with language access has been during special education meetings at her son’s previous school. Even though things have improved since she transferred him to another school in 2020, she still spends hours translating documents into Mandarin because the district provides very few fully translated documents.

During one meeting, a telephone translator said she didn’t know anything about special education and refused to translate, so Mandy started bringing a bilingual friend as a backup. Another time, a translator told Mandy the district was going to teach her son to “eat meat,” which her friend quickly corrected, explaining the specialist was talking instead about goals for feeding therapy.

“It sounds like a comical incident, but it was really frustrating,” Mandy said in Mandarin through a translator. “It feels like immigrant parents are deliberately excluded and pushed to the margins.” 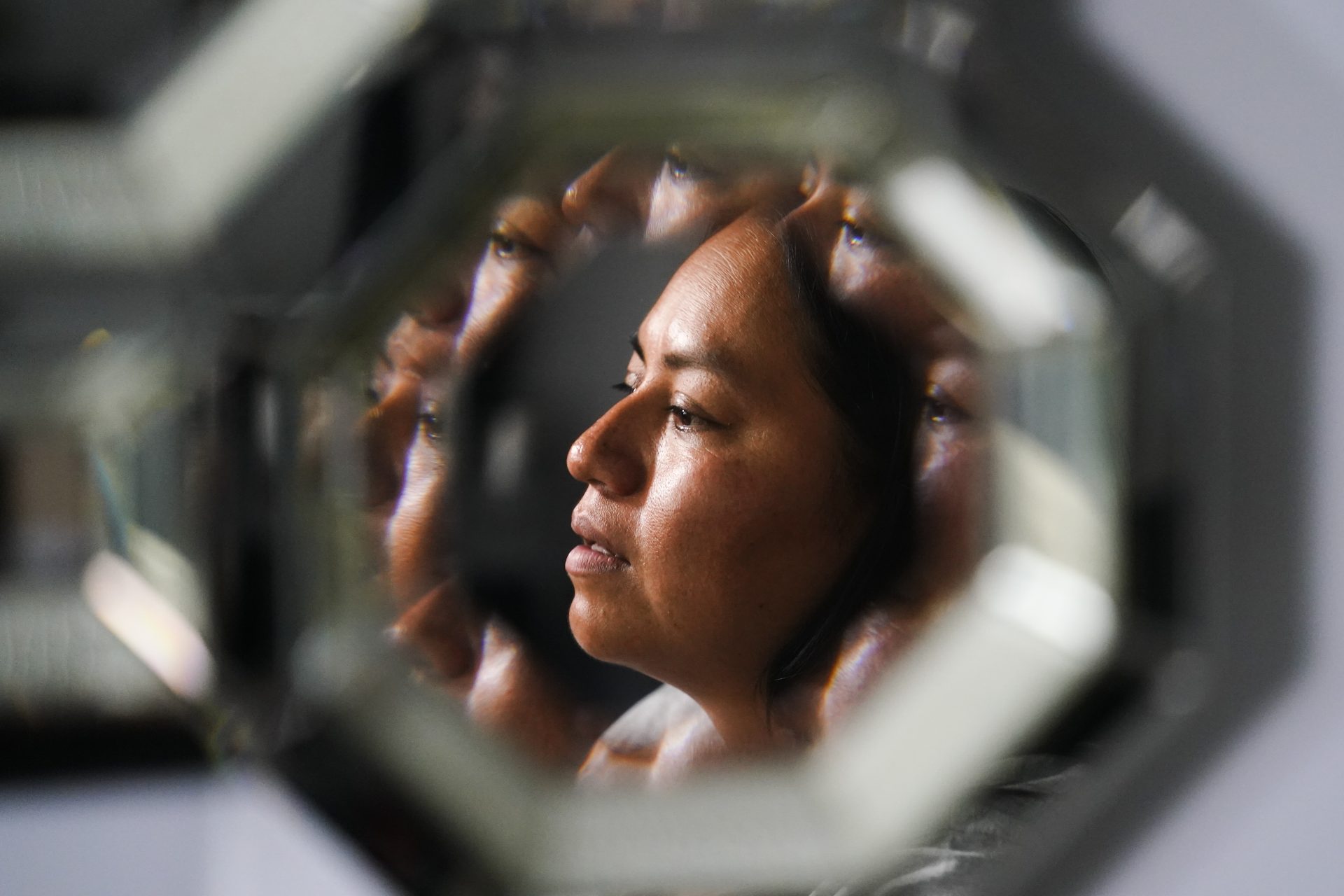 Lucia Altamirano, reflected in a mirror, speaks during an interview with The Associated Press in Philadelphia, Wednesday, Oct. 6, 2021. Philadelphia parents who don’t speak English say they’ve long been excluded from parts of their children’s education because of language barriers, an issue that’s been exacerbated by the pandemic and the return to in-person learning.

Jenna Monley, deputy chief of the district’s Office of Family and Community Engagement, said the office has issued guidance to school and district staff to transition to in-person interpreters for individualized education plan meetings when possible.

“I think that you are always going to find pockets of success. But there are some areas where things need to grow and improve,” Monley said.

The Philadelphia school district saw an increase to more than 16,500 English learners in 2020 from around 12,000 in 2013, and Census numbers show nearly a quarter of people in Philadelphia older than 5 speak a language other than English at home.

Juntos, a Latinx immigrant advocacy group in South Philadelphia, did a phone survey of families around March 2020 asking about their concerns related to the pandemic. Executive Director Erika Guadalupe Núñez said that, after basic needs, 99% listed schooling as their next concern, including how to get a school laptop or how to communicate with teachers who only spoke English.

“It was food, shelter, health — the key things they needed to feel safe and whole, and the very next thing was education,” said Guadalupe Núñez.

She added that Juntos members have long talked about their children being pulled from class by teachers or principals to help translate at schools, which is against school policy and against federal rules.

“It’s frustrating for so many reasons. We just want kids to be kids. And we want them to stay in class and have the same opportunities to learn that English-speaking children have,'” Guadalupe Núñez said.

The U.S. Department of Education’s Office of Civil Rights, which receives dozens of parental language complaints each year, issued guidance in 2015 on the legal obligation to communicate with parents in languages they understand, saying neither students nor untrained bilingual staff should translate. It also says translators should know any specialized terms or concepts in both languages.

Monley said the office provides school and district staff with guidance on when and how to use BCAs or the other contracted translation options. Annual refresher trainings are only required for “key staff,” which doesn’t include most teachers.

Philadelphia City Councilmember Helen Gym, who has spent years advocating for education and immigration issues, said she wants interpreters in every school every day, as well as more multilingual staff including counselors and nurses.

“We have a long way to go to enforce the language access mandates that are clearly in the legal books and were in fact the source of many different lawsuits and consent decrees,” she said.

“This was a city a decade ago that was on the brink of walking away from its public schools. And that would have been devastating for immigrant communities,” she said, referring to deep budget cuts around 2011 after changes to the state’s education funding formula. 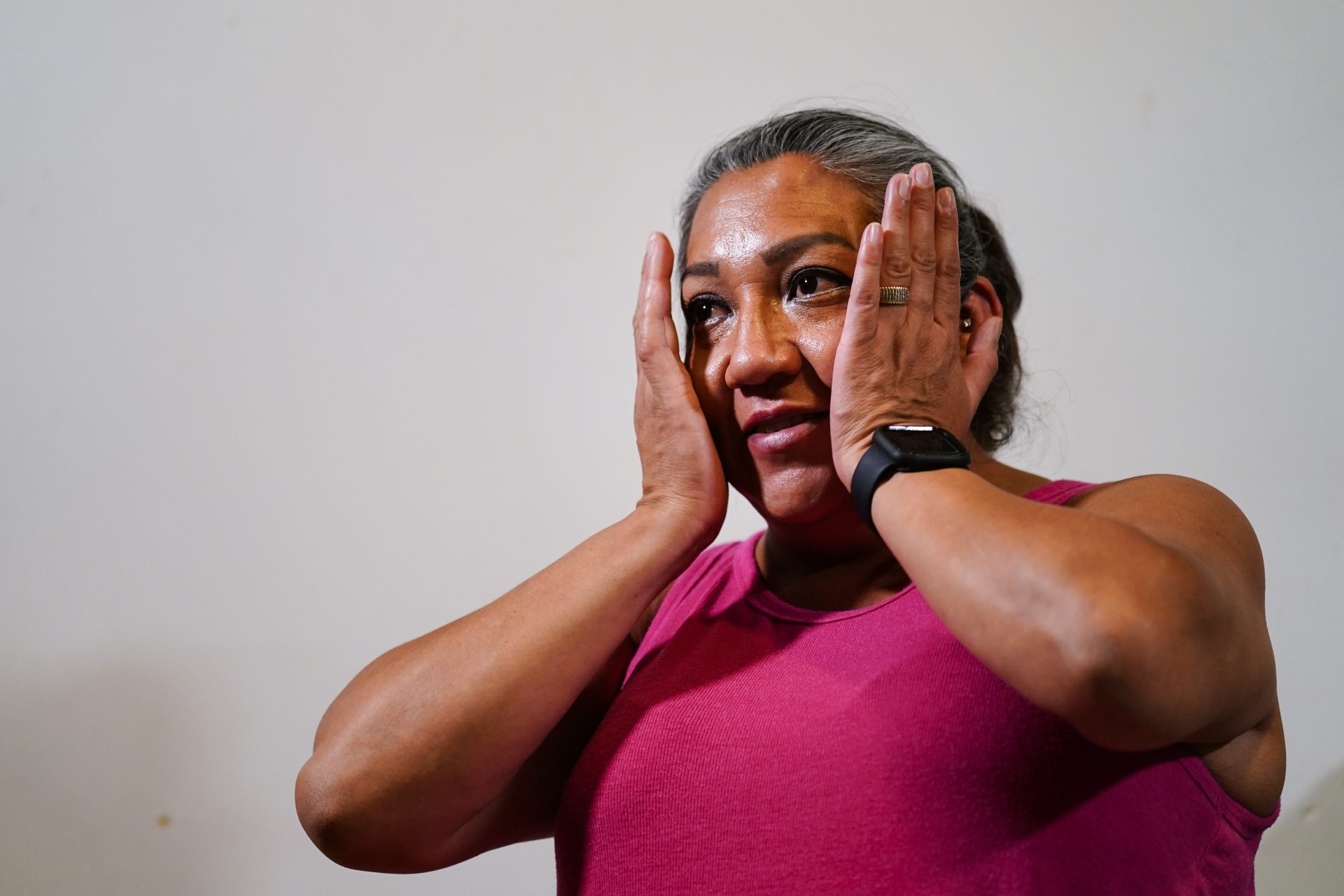 Olivia Ponce speaks during an interview with The Associated Press in Philadelphia, Wednesday, Oct. 6, 2021. Philadelphia parents who don’t speak English say they’ve long been excluded from parts of their children’s education because of language barriers, an issue that’s been exacerbated by the pandemic and the return to in-person learning.

She said the district closed nearly 30 schools and barely escaped financial crisis, but the number of BCAs — which are the district’s main resource for parents who speak languages other than English — was cut in half.

BCAs were created during the implementation of a settlement in a lawsuit filed by Asian American students in the 1980s demanding better resources for Asian English learners who had been largely left out. Gym, who served on the commission appointed to implement the settlement, said the changes benefited all immigrant communities.

But BCAs are still the only designated bilingual staff in school buildings, Gym said, and they often serve as cultural brokers connecting parents with important resources outside of school. Yet they’re paid a starting salary of about $24,000, she said.

Monley said the district has 101 BCAs after hiring about 45 over the last few school years. She said they serve in 108 schools with the greatest needs for language help out of about 220 total schools. Many BCAs float between multiple schools every week.

Even with the hiring, the district has close to the same number of BCAs it had a decade ago for thousands more students and families, Gym said.

Olivia Ponce said she was frustrated by a language barrier when both her children, who are nearly a decade apart in age, were in school. The 46-year-old single mother recalled trying to talk to a school counselor when her daughter, Olivia Vazquez, was hit by another student.

An interpreter was only available once a week, so the counselor pulled a student out of class to translate. Ponce said the student wasn’t translating accurately, and she became so frustrated she shouted, then kept her daughter home for a week.

Another time, Ponce rushed to her son’s school when another mother saw him in the principal’s office crying. A student had bitten him, and the teacher had planned to send a note home in English rather than calling Ponce.

“I didn’t know we had rights and that they couldn’t take students out of class to help translate for us. And that they were obligated to get someone on the line to help us. They never told us this,” Ponce said in Spanish. “What I want is for parents to know that when their children start an education, they have a right to be a part of it.”

Vazquez, now 27, is finishing up her last semester at Swarthmore College and hoping to help make sure immigrant students arriving in Philadelphia have a more supportive experience in school. She student-teaches in South Philadelphia in a fourth grade classroom — about the same age she was when she came to the U.S. from Mexico.

“(Education is) something that I want to do because of my experience and because I needed someone who looked like me and somebody who would tell me that it was OK and make me feel proud of my roots,” Vazquez said. 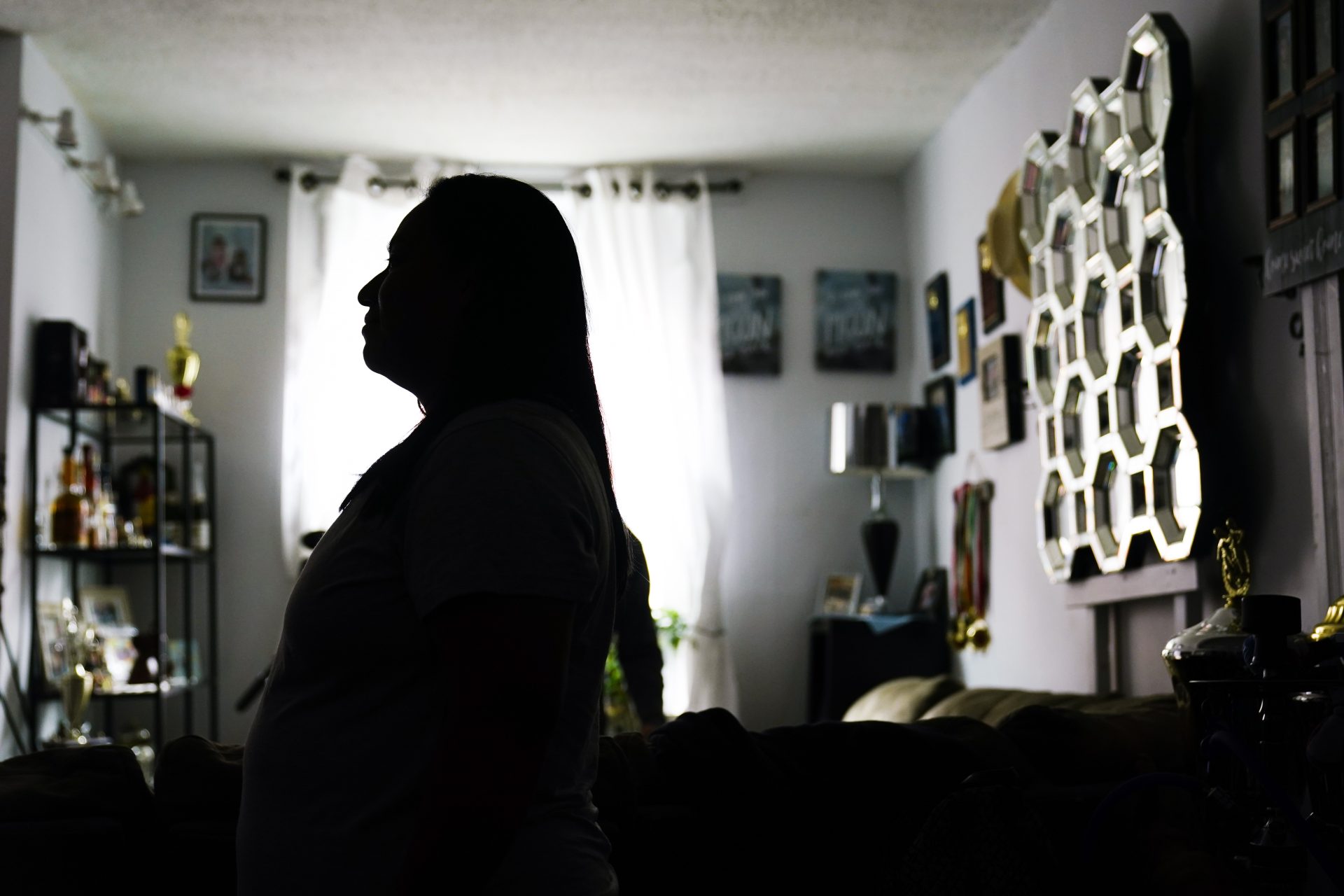 Lucia Altamirano speaks during an interview with The Associated Press in Philadelphia, Wednesday, Oct. 6, 2021. Philadelphia parents who don’t speak English say they’ve long been excluded from parts of their children’s education because of language barriers, an issue that’s been exacerbated by the pandemic and the return to in-person learning.

Experts said many districts, not just in urban areas, have seen increases in students and parents who speak languages other than English. Dominic J. Ledesma, an educational justice researcher, said many districts try to provide what’s necessary under the law without thinking about making schools an inclusive place for immigrant families.

“Legal compliance and civil rights compliance are just as important as the equity issues at stake. Those issues are really pervasive and systemic in nature and not limited to Philadelphia. It’s everywhere,” said Ledesma. “In an equitable system … it’s the administrators who are accountable to all parents.”

But with the language barrier, many parents said they had to work harder than English-speaking parents to be involved.

Lucia Altamirano remembered having to find someone who spoke English to come to school with her when her oldest son was being bullied.

Her son, who was 8 at the time, had tried to report the bullying, but Altamirano said the teacher told her there were too many students and “she couldn’t take care of them all.”

She transferred her son to a different school, where the bullying stopped. But the language issues continued because there was no dedicated interpreter and the school used an eighth grade girl to translate, Altamirano said.

She said her two younger children were fluent in English and had an easier time. The district also made improvements that made things easier for her, like assigning a BCA who spoke Spanish to the school and sending report cards home in Spanish, she said.

Monley and other district staff said they couldn’t comment on individual allegations, partly because many of the parents had not filed official complaints through their office.

Many of the parents said the school-level officials they complained to did not make them aware there was an official process.

Meanwhile Gym has been holding meetings in the community with other councilmembers, asking what parents want to see improve as the district searches for a new superintendent. She advocated for a full review of whether the district is in compliance with civil rights requirements for language and if needed, more litigation to push it into compliance.

“I don’t believe anyone can be at the forefront by meeting the bare minimum standards,” she said. “And I don’t think the school district is meeting that bare minimum for these parents.”

Pennsylvania teen had his hands up when killed by State Police, new videos show