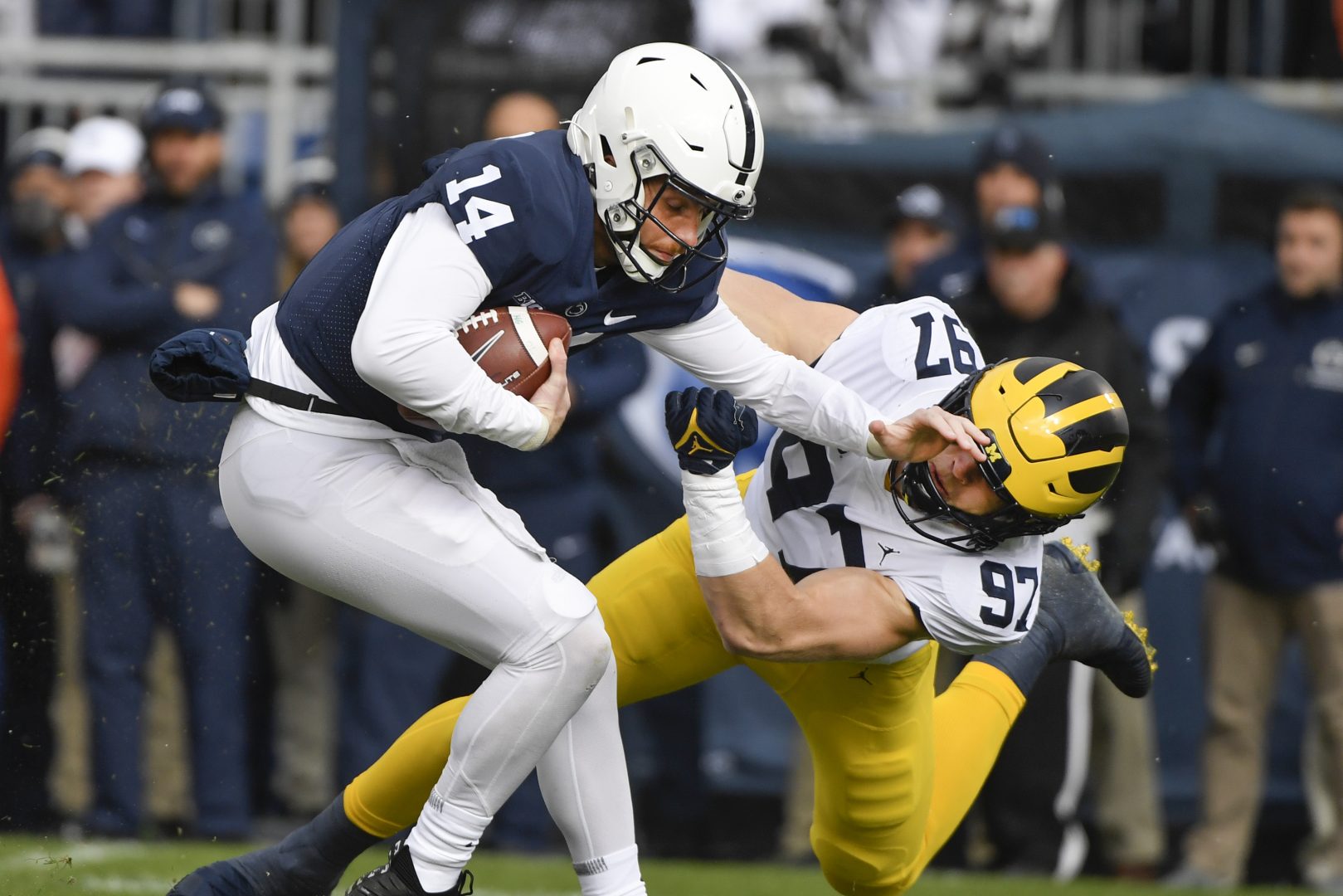 (State College)  —  Michigan tight end Erick All woke up on Saturday with a sore ankle, a leftover reminder of the Wolverines’ last painful loss.

Inside a packed, hostile Beaver Stadium, he was able to block out the discomfort enough to help No. 9 Michigan stay in the Big Ten championship chase with a 21-17 win over No. 23 Penn State.

All hauled in a 47-yard touchdown pass from Cade McNamara with 3:29 left and outran Penn State defenders to the end zone.

And what another loss would mean for the Wolverines’ chance to end their 16-year championship drought.

All was hurt when the Wolverines fell to No. 8 Michigan State on Oct. 30 and didn’t play last week in a win over Indiana. He knew the Wolverines needed to stay within reach of the Spartans and No. 6 Ohio State in the Big Ten East.

“Adrenaline took care of the rest,” All said.

Michigan visits Maryland next before hosting the No. 6 Buckeyes on Nov. 27.

“It’s going to be tough for sure,” McNamara said. “That game is going to be so big for us and I know when the moment comes, we’ll be ready.”

McNamara completed 19 of 29 passes for 217 yards and three touchdowns and Hassan Haskins ran for 156 yards on 31 carries. Roman Wilson caught a pair of touchdown passes for the Wolverines, who led 14-6 midway through the fourth quarter.

He withstood seven sacks, completing 23 of 43 for 205 yards and throwing a touchdown pass to tight end Tyler Warren with 7:35 to go. Clifford then tied it 14 when he connected with Jahan Dotson for a two-point conversion.

The Nittany Lions then got the ball back on a strip-sack of McNamara by defensive end Arnold Ebiketie deep in Michigan territory. Jordan Stout kicked a 31-yard field goal with 5:55 left for a 17-14 lead.

Michigan’s winning drive started with five straight runs by Haskins for 28 yards to move to the Penn State 47, setting up All’s touchdown.

“He just has a quality about him where he wants to and he can put the team on his back,” Harbaugh said.

“We were able to move the ball, but too many situations where we had to settle for field goals in the red zone,” Penn State coach James Franklin said. “We have to find a way to score more touchdowns.”

Penn State tried a pair of trick plays from kick formation in the first quarter, with mixed results.