The bills passed with near-universal Republican support and backing from at least one Democrat.

Pa. Senate backs bill to allow guns to be carried without permit

The bills passed with near-universal Republican support and backing from at least one Democrat.

(Harrisburg) — The state Senate on Tuesday approved two veto-bound firearms bills, including one to allow people to carry a loaded gun openly or concealed, without a permit, and another to punish municipalities that impose firearms ordinances that are stricter than state law.

Despite a certain veto from Gov. Tom Wolf, a Democrat, floor debate lasted nearly three hours, as Democrats warned that the result of such legislation becoming law would be more death and more violence amid already-spiking gun violence and the spread of illegal guns.

Republicans brushed aside the arguments, saying cities elsewhere with strict gun laws still have problems with gun violence and that law-abiding gun owners should not need the government’s permission to carry a firearm.

Debate became testy after the sponsor of the permitless-carry bill, Sen. Cris Dush, R-Jefferson, a former corrections office, seemed to re-enact a conversation he suggested he might have once had with a young inmate, and then blamed violence on young men who lack father figures. 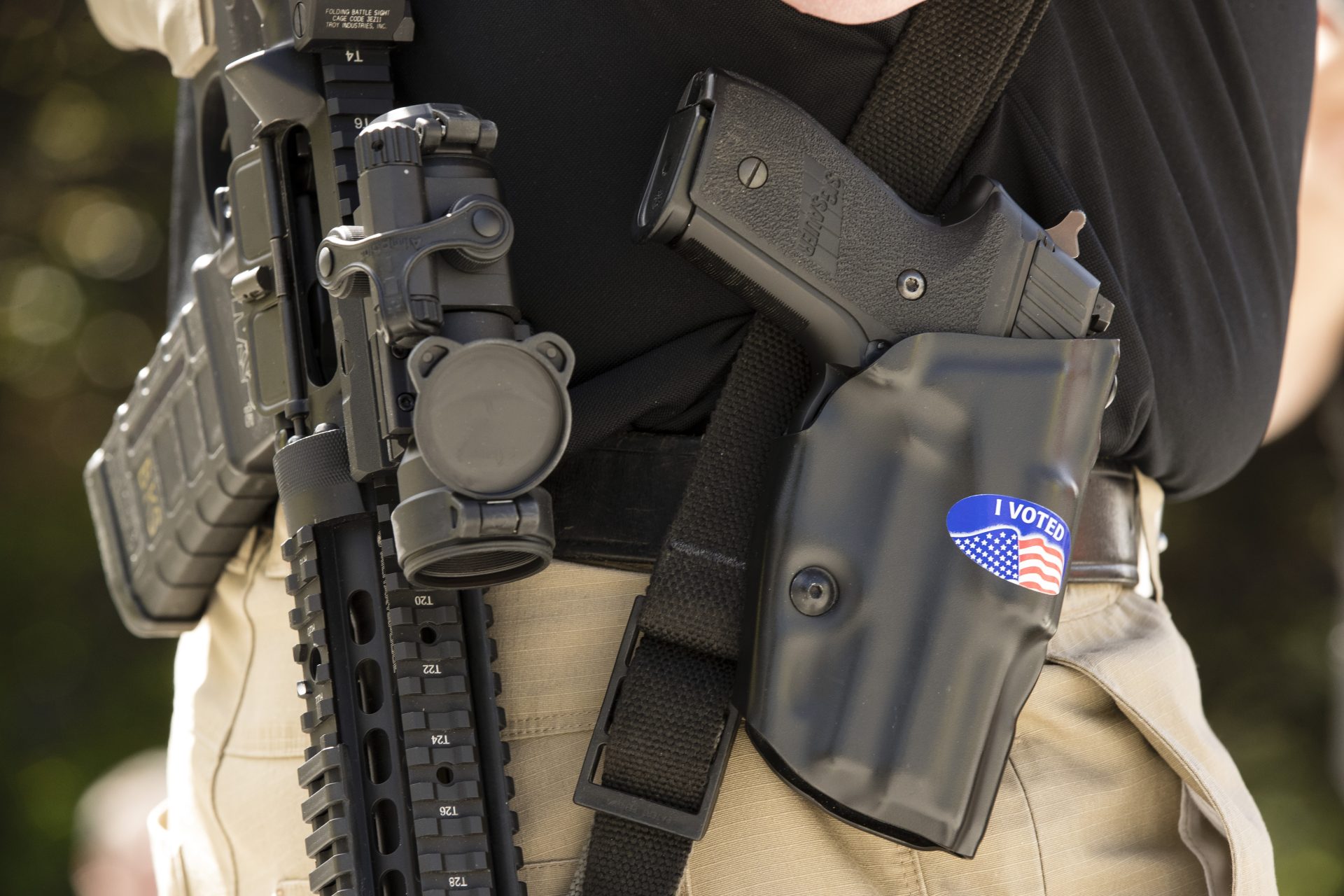 In this May 6, 2019 file photo, a gun rights advocate with an “I VOTED” sticker on his holster gathers with others for an annual rally on the steps of the state Capitol in Harrisburg, Pa.

Sen. Anthony Williams, D-Philadelphia, took exception to Dush’s portrayal, saying that his rendering of the inmate’s accent and his reference to Philadelphia youth was stereotyping and insensitive, and an “affront to many fathers who lost their lives to gun violence.”

Some young men grow up without father figures because their fathers were “murdered by a gun,” through no fault of their own, Williams said.

The bills passed with near-universal Republican support and backing from at least one Democrat. Republicans, meanwhile, blocked Democrats’ amendments, including one to end a background check exception for private sales of shotguns, sporting rifles and semi-automatic rifles.

The Republican-penned bills go the House of Representatives, which has already passed similar legislation on municipal ordinances. The Republican-controlled chamber has not moved on concealed-carry legislation.

Pennsylvanians are generally allowed to openly carry loaded firearms, although the law is silent on it.

Only in Philadelphia is a permit required for it.

But the legislation passed Tuesday would remove Philadelphia’s open-carry permit requirement, as well as the state’s requirement for people to get a permit to carry a concealed weapon, including storing it in their car. People under 21 cannot get such a permit, although the law allows anyone 18 and older to own a gun. The bill passed, 29-21, with one Republican opposing it and one Democrat in favor.

The Pennsylvania District Attorneys Association opposes the bill, as do several other law enforcement organizations.

“What this bill does is it makes it easier for people who should not have a gun to walk around with it,” said Sen. Sharif Street, D-Philadelphia. “That means people are going to die.” 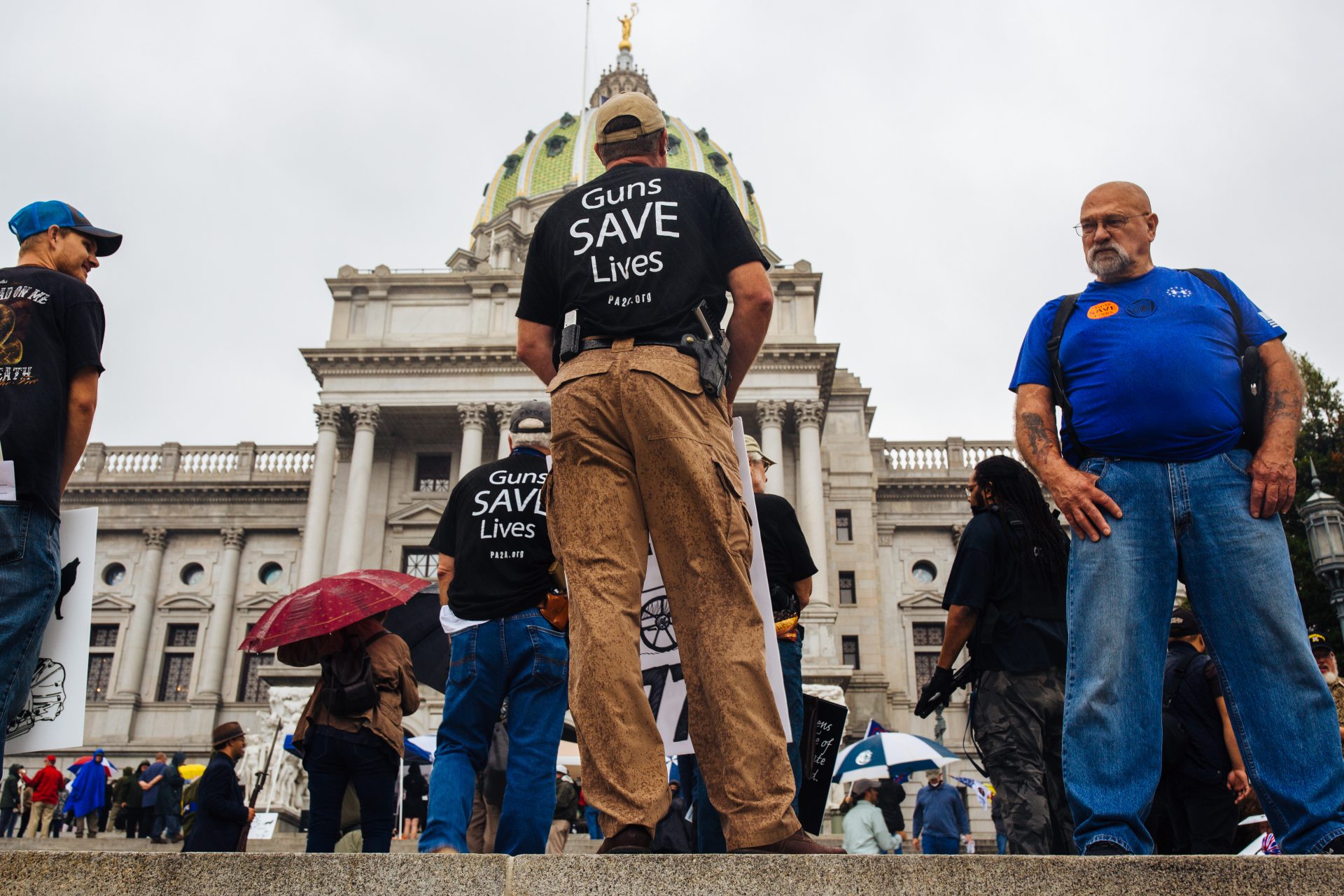 The Pennsylvania State Police reported just over 311,000 licenses to carry firearms were issued by county sheriffs’ offices and the city of Philadelphia in 2020, a 35% increase over 2019.

The other bill would revive legislation long-sought by gun-rights organizations to expand standing in court to sue a municipality over a firearms ordinance and collect damages from a losing municipality. The bill passed, 31-19, with every Republican and two Democrats in favor of it.

A similar bill was signed into law in 2014 by then-Gov. Tom Corbett, a Republican, but later struck down in court on a technicality. Wolf threatened to veto a previous bill, in 2016, before it died without reaching his desk.

Pennsylvania has long prohibited its municipalities from enforcing firearms ordinances that regulate the ownership, possession, transfer or transportation of guns or ammunition. But gun-rights groups complain municipalities often ignore the decades-old prohibition by approving their own gun restrictions.

Court precedent had held that someone only has standing to sue if they were prosecuted for violating such an ordinance, although the state Supreme Court last month overturned that precedent.