Pittsburgh Steelers running back Najee Harris (22) scores a touchdown past Chicago Bears defensive back DeAndre Houston-Carson (36) and cornerback Jaylon Johnson (33) in the first half of an NFL football game, Monday, Nov. 8, 2021, in Pittsburgh. 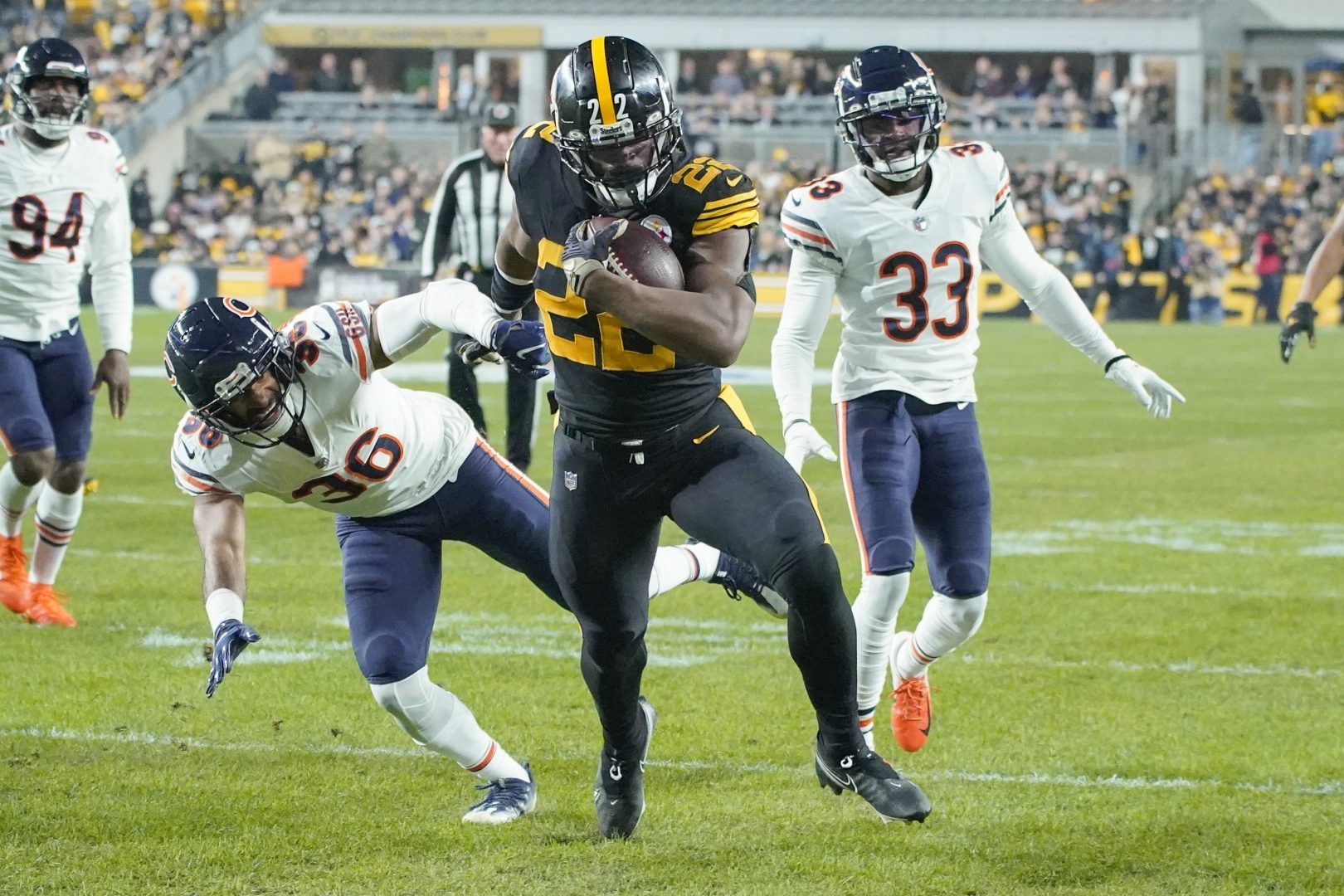 Pittsburgh Steelers running back Najee Harris (22) scores a touchdown past Chicago Bears defensive back DeAndre Houston-Carson (36) and cornerback Jaylon Johnson (33) in the first half of an NFL football game, Monday, Nov. 8, 2021, in Pittsburgh.

(Pittsburgh) — Mike Tomlin sat down, smiled and let out a sarcastic laugh.

“Had ’em all the way, right?” the longtime Pittsburgh Steelers coach said after his team slipped past Chicago 29-27 on Monday night.

Not after a 10-point fourth-quarter lead turned into a one-point deficit following a fumble by punt returner Ray-Ray McCloud and a flash of brilliance by Bears rookie quarterback Justin Fields, who put Chicago in front with a 16-yard strike to Darnell Mooney with 1:46 to go.

Steelers rookie tight end Pat Freiermuth hardly seemed rattled. Sure, the Bears had the lead. But the Steelers had Ben Roethlisberger.

“I wasn’t nervous at all,” said Freiermuth, who caught a pair of touchdown passes. “Ben’s been doing this for a long time. We’re all confident in each other. I was thinking in my mind when they scored, ‘It’s too much time (left).’”

Roethlisberger guided the Steelers 52 yards in seven plays — abetted by Chicago’s 12th penalty of the night — to set up Chris Boswell’s 40-yard field goal with 26 seconds left, and Pittsburgh won its fourth straight after a 1-3 start.

Roethlisberger completed 21 of 30 passes for 205 yards and the two scores to Freiermuth while pulling off the 50th game-winning drive and 38th fourth-quarter comeback of his 18-year career. Rookie running back Najee Harris found the end zone for the fifth straight game and Boswell made three field goals — including two from over 50 yards — into the open end at perpetually windy Heinz Field. 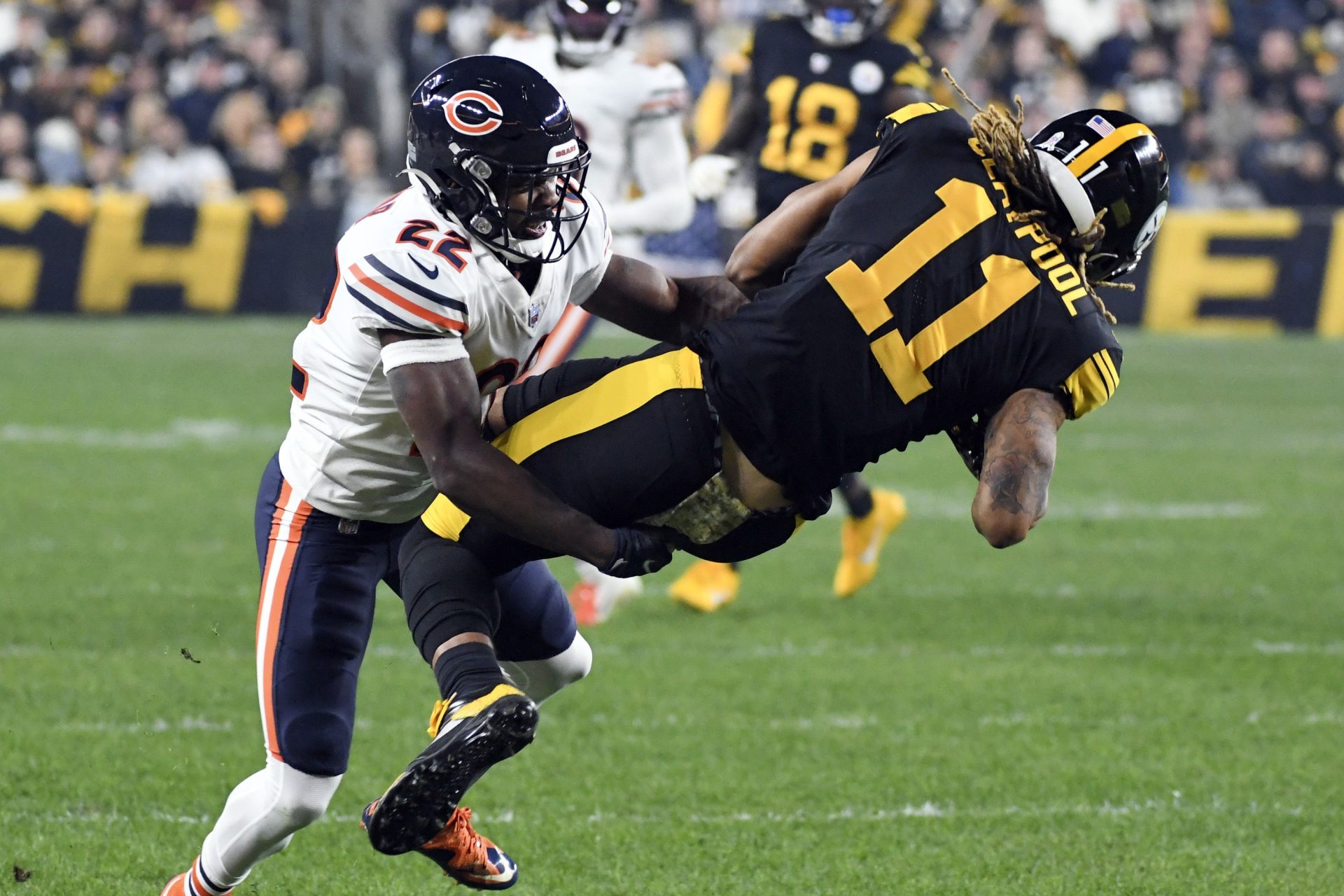 Pittsburgh Steelers wide receiver Chase Claypool (11) is tackled by Chicago Bears cornerback Kindle Vildor (22) after making a catch during the first half an NFL football game, Monday, Nov. 8, 2021, in Pittsburgh.

Boswell might have been the only one relaxed after the Steelers frittered away a seemingly comfortable lead when McCloud gave the ball up on a punt return midway through the fourth quarter that DeAndre Houston-Carson returned 25 yards for a touchdown to pull the Bears within three.

Things got weird from there. Chicago appeared to get a stop on Pittsburgh’s ensuing possession only to have linebacker Cassius Marsh — who spent training camp with the Steelers — get flagged for taunting after sacking Roethlisberger on third down.

Marsh’s celebration looked relatively innocuous, though the league has cracked down on any semblance of taunting this season.

“I saw the player, after he made a big play, run toward the bench area of the Pittsburgh Steelers and posture in such a way that I felt he was taunting them,” referee Tony Corrente said.

“It’s just sad to see stuff like that happen in a close game like that,” he said. “It’s just rough. I don’t want to say too much because you all know how it is.”

The call extended Pittsburgh’s drive and allowed the Steelers to take a 26-20 lead with 2:52 remaining.

It took Fields all of 66 seconds to put the Bears in front. He took Chicago 75 yards in seven plays, and his strike to Mooney appeared to have the Bears in position to pull off a stunner before Roethlisberger and Boswell came through.

Chicago did get the ball to midfield in the final seconds, but Cairo Santos’ 65-yard attempt into the closed end of the stadium was well short. Bears coach Matt Nagy praised Fields’ resilience on a night he passed for 291 yards with a touchdown and an interception and ran for 45 more, but it wasn’t enough.

“We lost,” Nagy said. “This is a team game. That’s what our guys care about. And we’ve got to figure it out.”

The victory was the 150th of Tomlin’s career, moving him into second place on the franchise’s win list behind Chuck Noll. Tomlin passed predecessor Bill Cowher, who joined Noll in the Hall of Fame over the summer.

“I’m just appreciative of the standards that have been set by those that have come before me,” said Tomlin, who is in his 15th season. “That standard is inspirational for us. … I work to do my job and uphold that standard.”

Chicago’s dozen penalties ran the gamut, from a pass-interference call that set up a Pittsburgh field goal to an illegal block in the second quarter that negated a 1-yard touchdown pass from Fields to Jimmy Graham. The Steelers, by comparison, were flagged six times for 30 yards.

“With 12 penalties, that’s too many,” Nagy said. “What it does is it pushes you back or gives them free yards. You want to stay away from penalties and I think we need to be better there.”

THE MAN GOT PAID

Steelers linebacker T.J. Watt sacked Fields three times to push his season total to 11 1/2. Watt signed a contract in September that made him one of the highest-paid defenders in the league.

Bears: WR Allen Robinson went down with a hamstring injury. … DT Akiem Hicks is dealing with a sprained ankle.

Steelers: WR Chase Claypool was being evaluated for an undisclosed injury.

Bears: Are off next week, then welcome Baltimore to Soldier Field on Nov. 21.

Steelers: Host Detroit next Sunday. Pittsburgh has won its last five meetings with the Lions.