FILE - In this Sept. 27, 2021, file photo the Capitol is seen at dawn in Washington. Divided Democrats struggling to enact President Joe Biden’s domestic agenda are confronting one of Congress’ cruelest conundrums — your goals may be popular, but that doesn't ensure they'll become law or that voters will reward you. (AP Photo/J. Scott Applewhite, File)

The losses, in Virginia and elsewhere, were especially poignant for Tim Kaine and Mark Warner — both former Virginia Democratic governors and now senators. 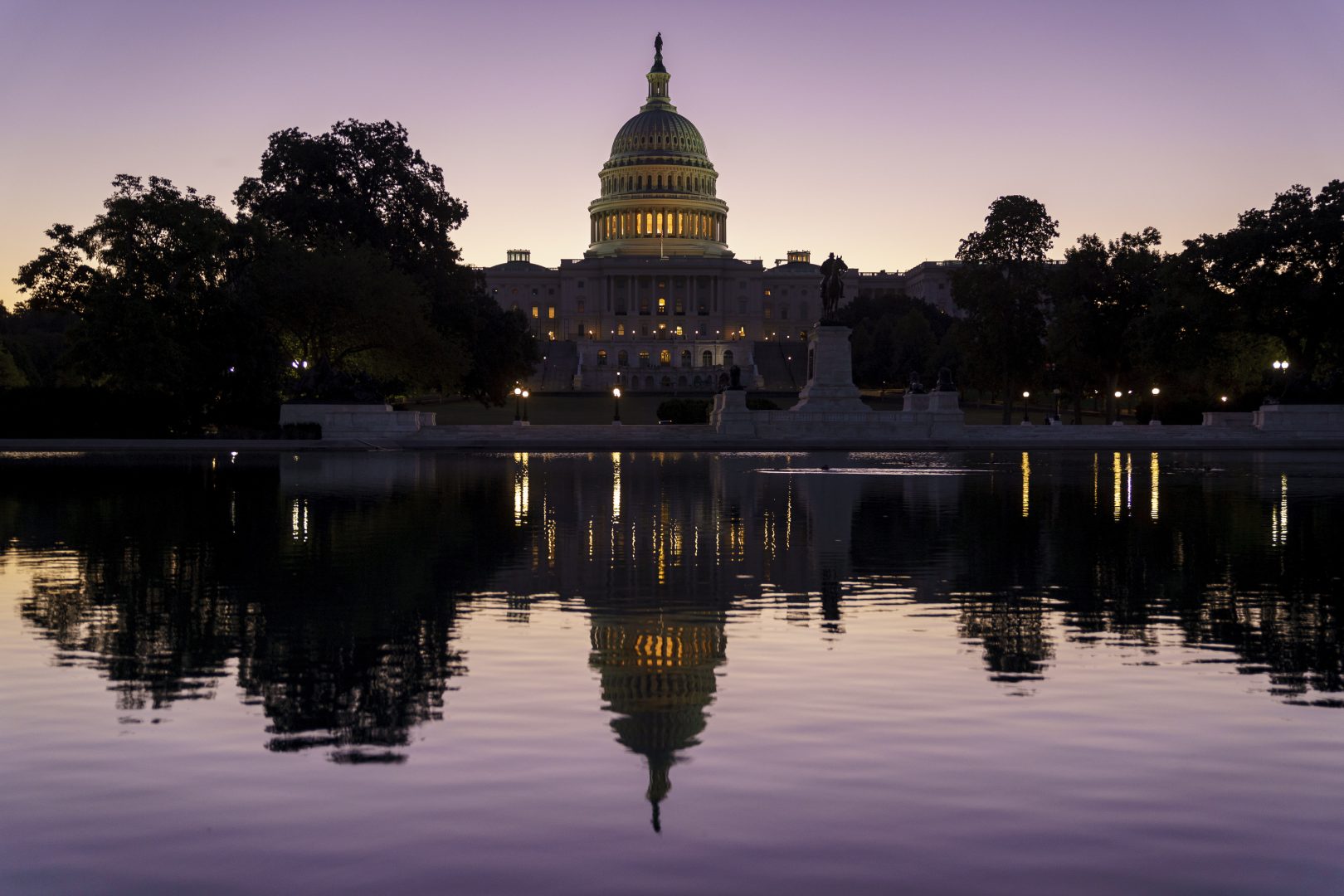 FILE - In this Sept. 27, 2021, file photo the Capitol is seen at dawn in Washington. Divided Democrats struggling to enact President Joe Biden’s domestic agenda are confronting one of Congress’ cruelest conundrums — your goals may be popular, but that doesn't ensure they'll become law or that voters will reward you. (AP Photo/J. Scott Applewhite, File)

(Washington) — As Democrats in Congress tried to make sense of Tuesday’s election results, members of the party’s moderate wing on Wednesday said they warned their colleagues of potential election losses by holding up the $1 trillion bipartisan infrastructure bill.

The Democratic losses, in Virginia and elsewhere, were especially poignant for Tim Kaine and Mark Warner — both former Virginia Democratic governors and now senators. They say they issued warnings to their colleagues.

“Mark and I told the caucus that this would happen if we didn’t act promptly, and it has in fact happened,” Kaine told reporters.

Kaine said “Dems blew the timing” by not passing the bipartisan legislation sooner. Instead the bill has languished in the House since its approval in the Senate in August, with progressives saying they would not pass the bill until a large social spending package was also passed.

Now Kaine, Warner and other Democrats are using the setback to push House Democrats to finally get the legislation across the finish line and to President Biden’s desk.

“That should be an accelerant to our efforts,” Senate Minority Whip Dick Durbin of Illinois said.

Warner said the election losses send an urgent message to Democrats that they need to govern in a “pragmatic way” and the first step is sending the Biden the bipartisan legislation.

“What I heard as I was out campaigning for the [Virginia Democratic] ticket was, ‘Hey, you guys got the White House, the Senate, the House, when are you getting more things done?’ ” Warner said. “I mean, only in Washington could people think that it is a smart strategy to take a once-in-a-generation investment in infrastructure and prevent your president from signing that bill into law.” 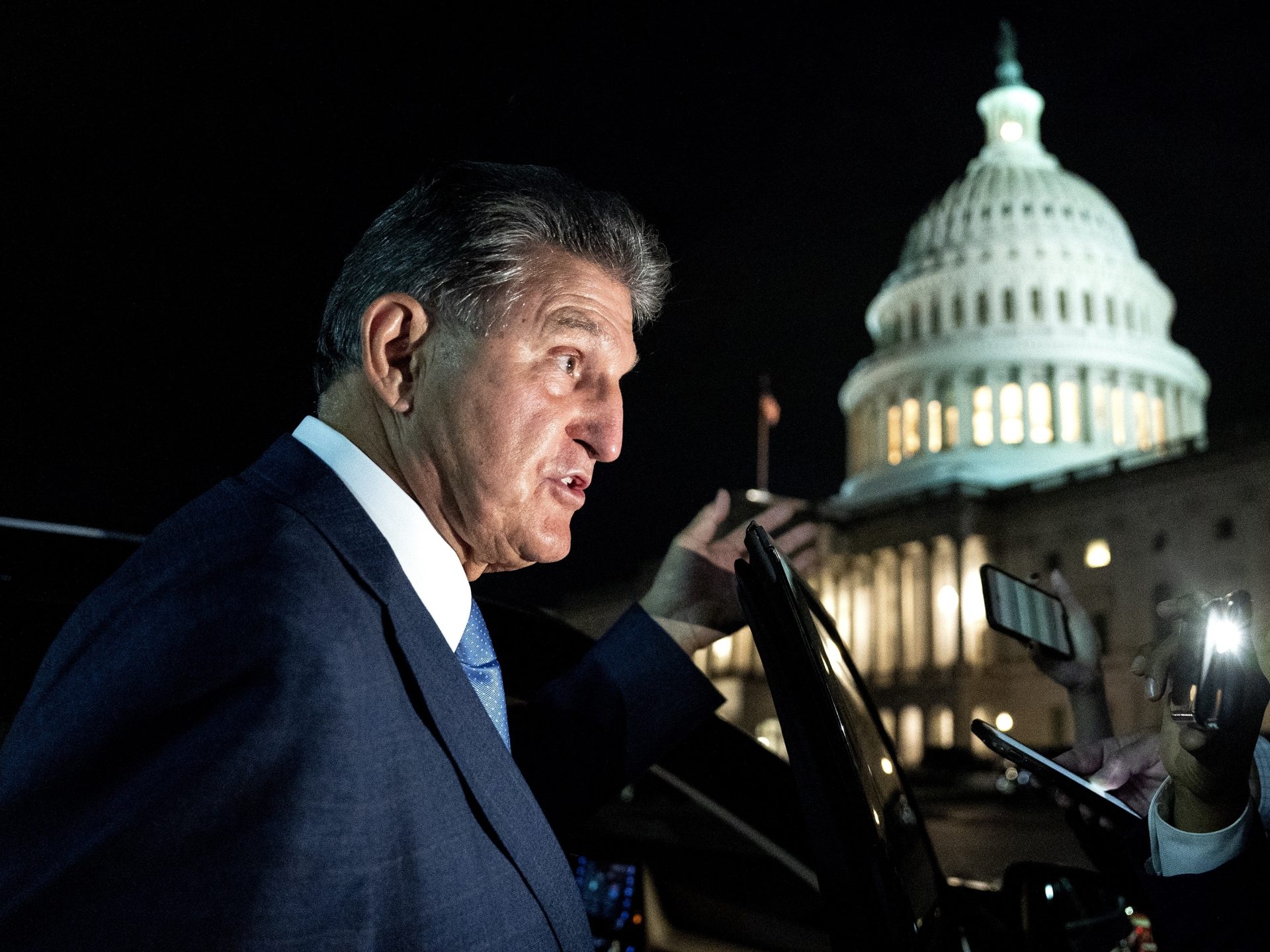 Senator Joe Manchin, a Democrat from West Virginia, speaks to members of the media while departing the U.S. Capitol in Washington, D.C., U.S., on Thursday, Oct. 7, 2021. The U.S. Senate approved legislation that pulls the nation from the brink of a first-ever payment default with a short-term debt-ceiling increase, breaking a weeks-long stalemate that rattled financial markets. Photographer: Stefani Reynolds/Bloomberg via Getty Images

Progressives see a different message in the Virginia loss

For months, the party’s progressive wing in the House has held back votes for the bipartisan bill as they negotiated with key moderate members — Sen. Joe Manchin of West Virginia and Kyrsten Sinema of Arizona — on a larger social spending package deal.

But even as the blame game played out across the Democratic Party on Capitol Hill on Wednesday, progressives rejected talk that the infrastructure bill would have made a difference in Tuesday’s results in Virginia.

“There is no way that you can say that a 12-point swing in a state is due to Congress not passing a bill,” said Rep. Pramila Jayapal, chairwoman of the Congressional Progressive Caucus.

Rather, Jayapal, D-Wash., said every attack ad she saw against Virginia Democratic gubernatorial candidate Terry McAuliffe focused on education and parents, not the lack of infrastructure.

She argued the main focus now needs to remain on “real relief” for struggling parents and families. Jayapal made the remarks to reporters just before a House Democratic caucus meeting to hammer out the latest plans to potentially vote on both the bipartisan infrastructure bill and the social spending package, the Build Back Better bill, later this week.

Other progressives also sounded a skeptical note that Tuesday’s election failures were tied to the stalled-out infrastructure package. 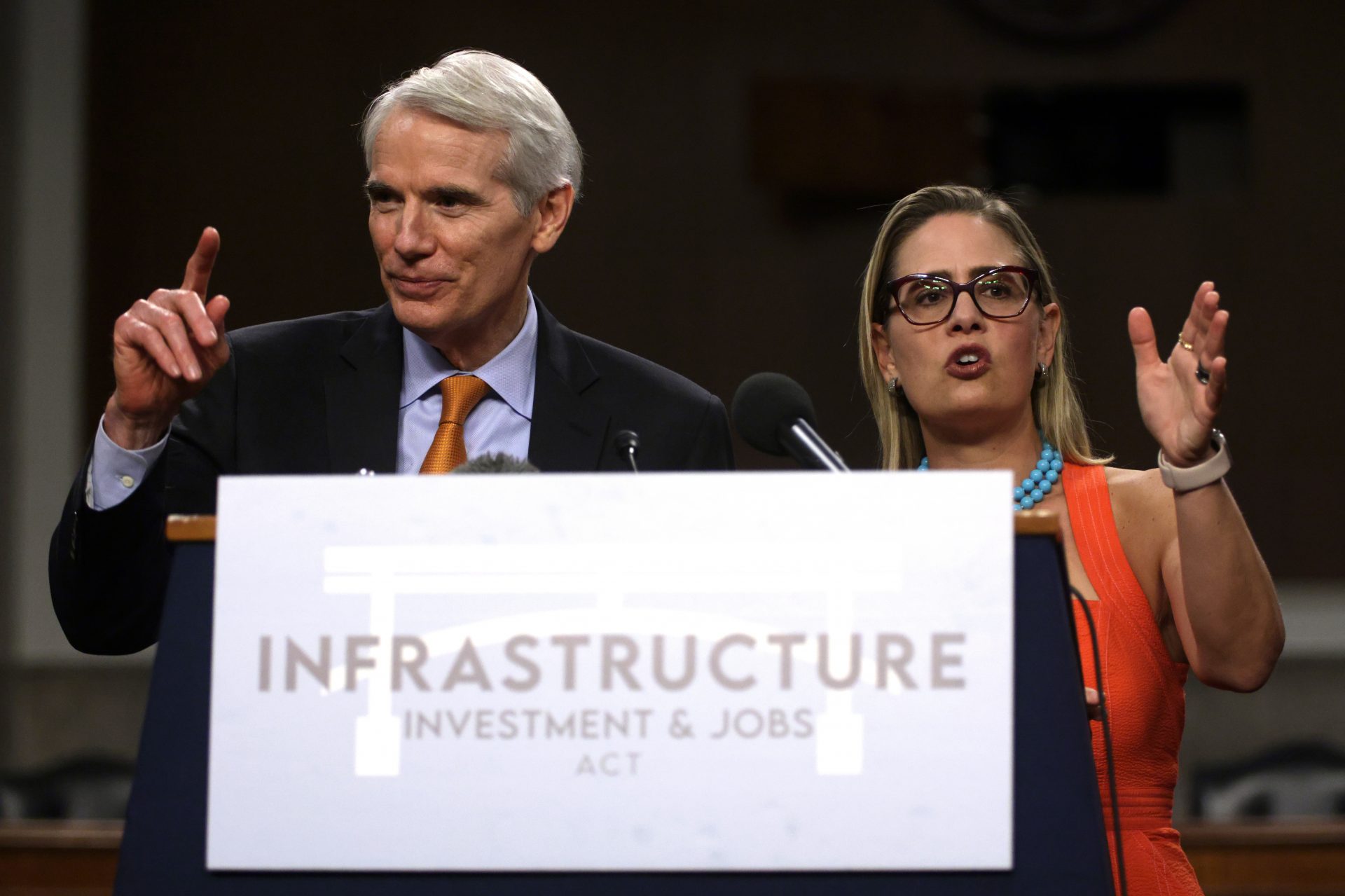 Sens. Rob Portman, R-Ohio, and Kyrsten Sinema, D-Ariz., take questions at a news conference  after a procedural vote for the bipartisan infrastructure framework.

Lessons to be learned

Biden also weighed in on messages voters sent to Democrats, referencing work that remains on his stalled agenda — infrastructure and the social spending bill.

“I do know that people want us to get things done,” Biden said. “I think it should have passed before Election Day.”

Several moderates also noted that Tuesday’s electoral showing had some harsh lessons for the party.

Manchin said many of the voters in the pocket of Southwest Virginia mirror those of his home state in West Virginia. “These are the people I talked to all the time. And I knew what they were concerned about, they were concerned about inflation, high costs, making it more difficult for them,” Manchin said. “And I think they spoke loud and clear at the voting box. So I hope … everybody listens.”

Kaine added Democrats cannot afford to walk away from the election upsets without looking at potential roadblocks for the party in the future.

“I hope the [Democrats] view this as the ‘Ghost of Christmas Future’ experience,” Kaine said. “Like this isn’t what the future has to be, but if you don’t change your ways, this is what the future will be.”