A patch is shown on the uniform of a guard with the GEO Group, Inc., during a media tour of the U.S. Immigration and Customs Enforcement detention center, Monday, Dec. 16, 2019, in Tacoma, Wash. The GEO Group is the private company that operates the center for the U.S. Government.

A major immigrant detention center just closed in Pa. but plans for new a one could mean more detainees here than ever

A lawsuit against Clearfield County could at least pause the establishment of one of the largest and private detention centers in the northeast. 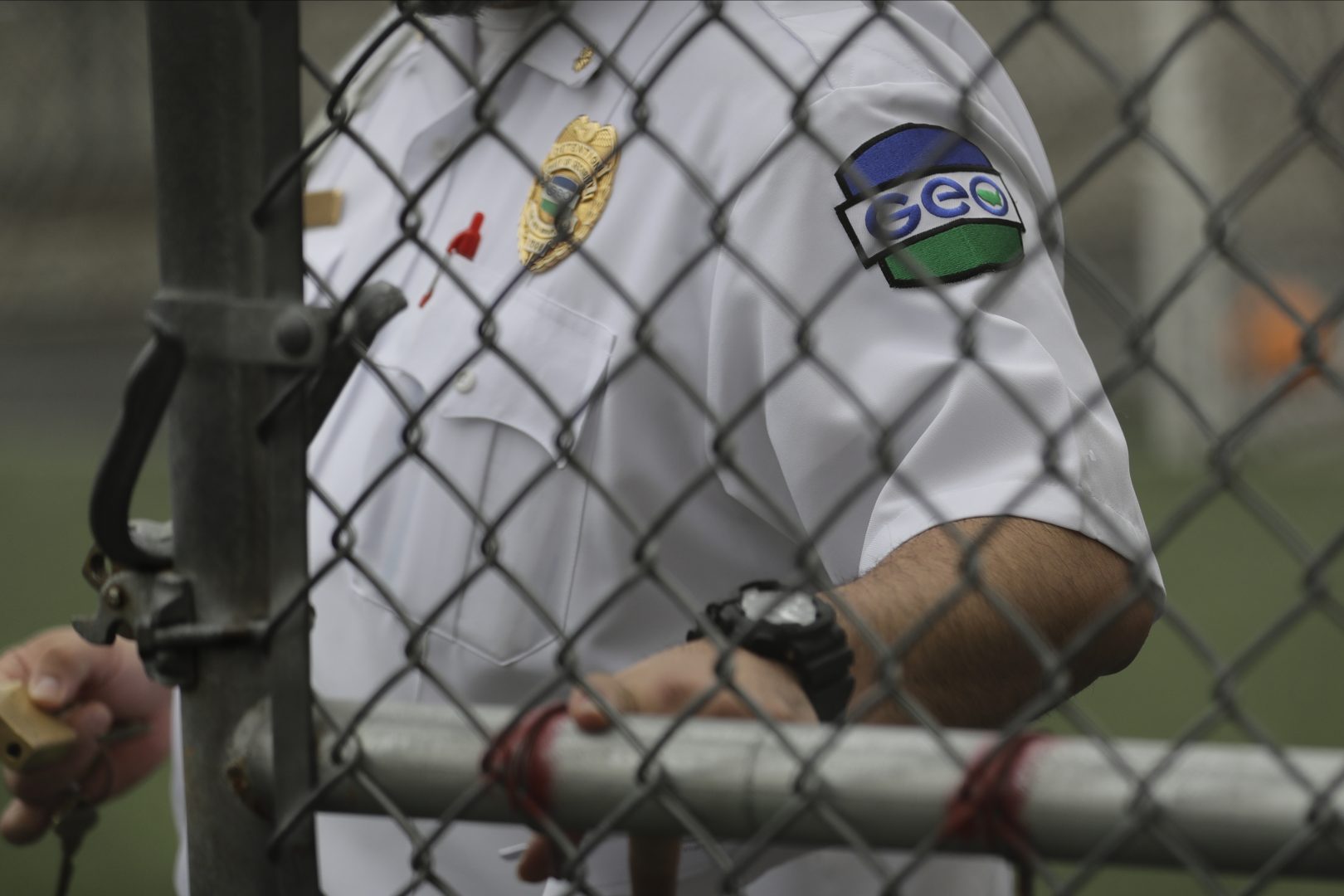 A patch is shown on the uniform of a guard with the GEO Group, Inc., during a media tour of the U.S. Immigration and Customs Enforcement detention center, Monday, Dec. 16, 2019, in Tacoma, Wash. The GEO Group is the private company that operates the center for the U.S. Government.

(Phillipsburg) — When York County commissioners decided in July that the county’s longstanding deal with federal authorities to detain immigrants was no longer beneficial, advocacy groups around the state heralded it as a victory.

Erika Guadalupe Núñez, executive director of the Juntos, said she was among those who celebrated.

“We had just essentially won the closure of what was at that point the largest detention center (in the state) with 800 beds,” Núñez said.

But now, a project in Clearfield County could mean that more immigrants than ever will be incarcerated by federal immigration authorities in Pennsylvania.

“I think what’s particularly infuriating is to learn that a local county had engaged a private company to open the first private detention center in the state that is double the size that York ever was,” Núñez said.

Juntos is joining the ACLU of Pennsylvania in a lawsuit against Clearfield for allegedly not divulging plans to convert the 1,878-bed Moshannon Valley Correctional facility to a detention center for U.S. Customs Enforcement. 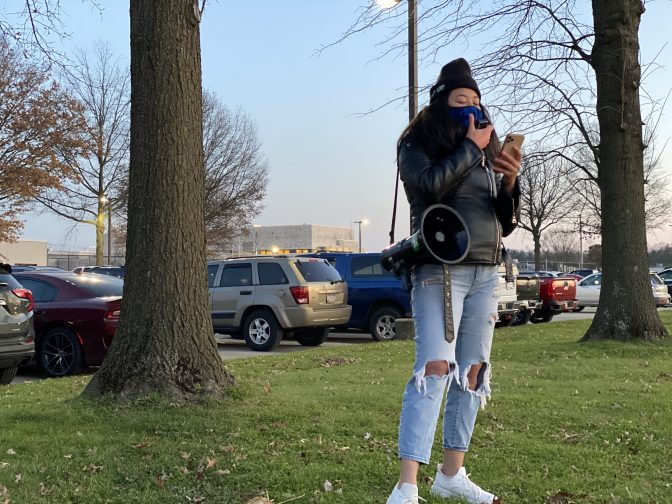 Erika Guadalupe of the organization Juntos speaks outside York County Prison about the health risks posed to people in detention.

The lawsuit alleges that the commissioners did not share the agenda for the Sept. 28 meeting, as required by the state’s open meeting laws, also known as the Sunshine Act. The commissioners only provided public notice that a meeting would be held without giving specifics, the lawsuit claims.

Early this week, Commissioner Chair John Sobel said the county is not commenting on the lawsuit, but it has planned a public meeting to “reaffirm” agreements with ICE and GEO group Wednesday afternoon.

The county is set to receive more than $263 million from the 5-year deal, according to the intergovernmental contract obtained by WITF through a Right-to-Know request. Private prison corporation GEO Group will operate the facility.

The budget also has a line item allocating $1.5 million to a volunteer work program, which appears to pay detainees $1 for each day of work. 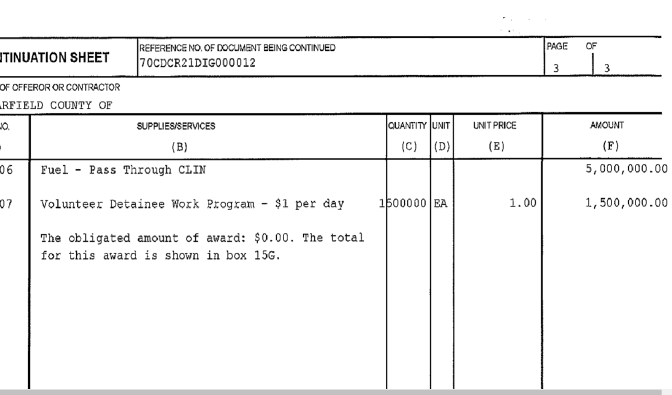 A line item from the intergovernmental agreement between ICE and Clearfield County.

The contract for the detention center plans staffing for an initial 800 detainees, and there is a second plan for the center to be used at full capacity.

GEO is the biggest taxpayer to the Philipsburg-Osceola Area School District, and the new contract was praised by Republican U.S. Rep. Glenn Thompson of Centre County as a way to preserve local jobs, according to Centre Daily Times.

Thompson voted against certifying Pennsylvania’s election results for President Biden despite no evidence to support election-fraud claims. He also signed onto a Texas lawsuit to invalidate President Joe Biden’s victory.

The ACLU has decried a decision by Biden to allow the federal government to use private detention centers for immigrants. Immigrant advocates argue the practice goes against his campaign promises and an executive order that applied to the Department of Justice, not the immigration agencies. 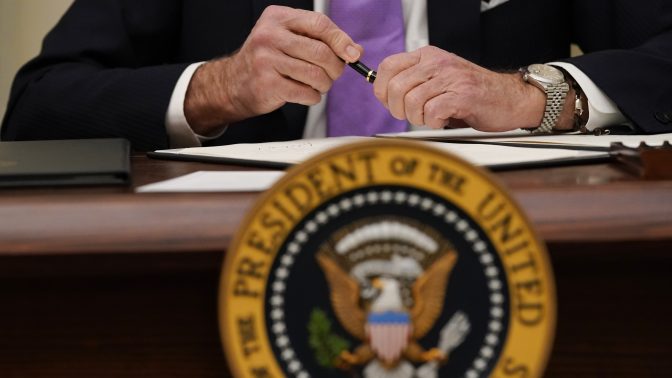 FILE – Int his Jan. 21, 2021, file photo President Joe Biden puts the cap on a pen after signing an executive order in the State Dinning Room of the White House.

Reggie Shuford, executive director of the ACLU of Pennsylvania, lambasted the president.

“This is a stunning about-face from the Biden administration and its stated commitment to end privatized immigration detention,” Shuford said in a written statement. “There is significant momentum to end the use of private prisons and immigration detention. President Biden is now dragging us backward.”

The Biden administration has also been criticized for increasing immigrant incarceration in recent months. Immigrant detention has gone up around 70 percent since the start of the year, according to ICE and Syracuse University data.

The ACLU filed the lawsuit on behalf of Tim Smith, a Clearield resident who denounced the process of the vote.

The lawsuit may result in the commissioners having to redo the process, meaning the contracts for the detention center could be paused while the public is informed and can comment on the project. Then, commissioners would have to vote on the measure again.

There is also a possibility that the county would have to pay for the ACLU’s legal work on the case and even criminal charges, if pursued by a prosecutor’s office.

But informing the public and even receiving negative feedback on a project does not mean commissioners have to vote in line with public opinion. 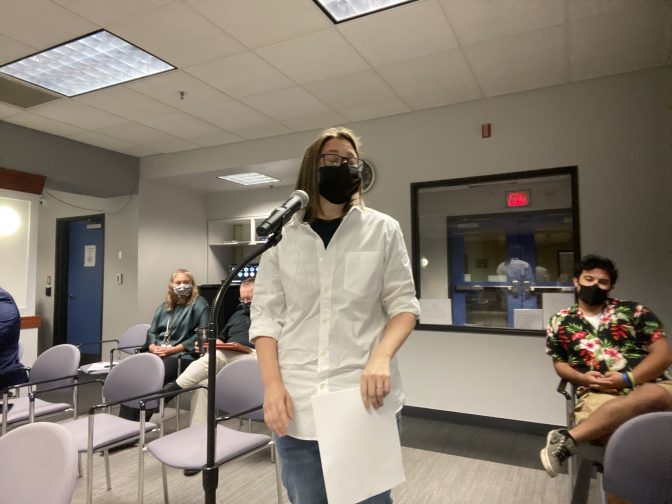 Pro-bono immigration lawyer and co-founder of Aldea-The People’s Justice Center, speak in opposition to detaining immigrants in the Berks facility.

In Berks County, commissioners voted to convert the Berks Family Residential Center into an all-adult female detention center, despite all public comments at the meeting calling for the county to end its contract with ICE or similar sentiments.

Berks also faced a Sunshine Act lawsuit for its secretive handling of plans concerning the conversion of the center. The Sheller Center at Temple Law School, which filed the lawsuit,  withdrew it when Berks Commissioners took public comment and held the vote on the conversion.

The center had detained asylum-seeking families with children for nearly 20 years. Berks and the federal government inked the modification to the contract in late September, according to documents obtained by WITF through the open records law.

Berks will receive $1,033,000 from the deal with the federal government, according to county chief financial officer Robert Patrizio. 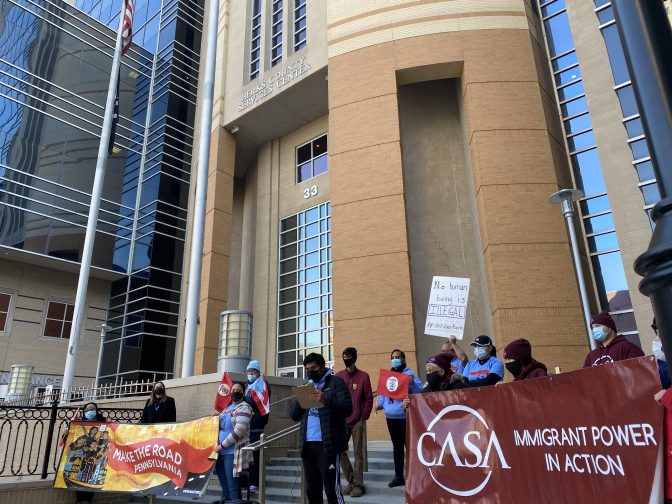 That contract stipulates a maximum number of 100 detainees, according to county officials.

The Berks detention center has available unused floors in the center, which the county attempted to expand into when it detained families. That effort was blocked by the state Department of Human Services, which had oversight of the center because it housed children. 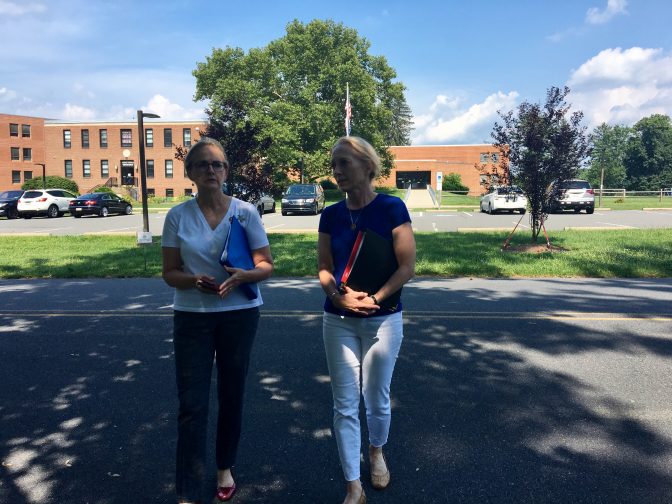 There were no immigrants yet detained at the Berks Center as of Oct. 22, according to ICE officials.

As part of WITF’s commitment to standing with facts, and because the Jan. 6 attack on the U.S. Capitol was an attempt to overthrow representative democracy in America, we use language in this story that shows elected officials’ connections to the insurrection. To read more about this commitment, click here.