Philadelphia Eagles running back Boston Scott (35) rushes for a 1-yard touchdown during the first half of an NFL football game against the Detroit Lions, Sunday, Oct. 31, 2021, in Detroit.

Running the ball is a winning formula for the Eagles

“Actually, he texted me: ‘Hell yea, coach,’ with all caps,” Sirianni said Monday, a day after the Philadelphia Eagles routed the winless Detroit Lions 44-6.

“Miles was obviously super excited for his teammates. He’s a great person, a great teammate, great player. Sure glad we have him on the team. Obviously, we’re missing him right now and looking forward to when he gets back.”

Sanders can only hope Sirianni sticks to the ground attack after ignoring it most of the season. The formula worked perfectly against the Lions as the Eagles amassed 236 yards rushing and four touchdowns. Boston Scott had 60 yards and two scores and Jordan Howard added 57 yards and two scores. Quarterback Jalen Hurts ran for 71 yards and only threw 14 passes.

“We had some good success early on running the football, being able to continue with what was working, but obviously we want to be able to be balanced in our attack and with running the football and setting up some play-actions from that,” Sirianni said. “So, the game allowed for that in the situation that happened yesterday. Then again, we see that we can run the ball pretty well, and so we want to repeat the things that we do well, also.

“That doesn’t always mean it’s the style of runs we ran yesterday, right? Each style of runs is going to depend on what the defense is doing and what their defensive ends and defensive lineman and their front seven guys. But there is no doubt that we want to be able to run it because that will only help our play-action game and help Jalen moving forward.”

The Eagles (3-5) dominated the Lions (0-8) from start to finish in all phases. The victory followed consecutive losses that put pressure on Philadelphia’s rookie coach — some people were calling for Sirianni to be fired after he used a flower analogy last week in a message to his players. 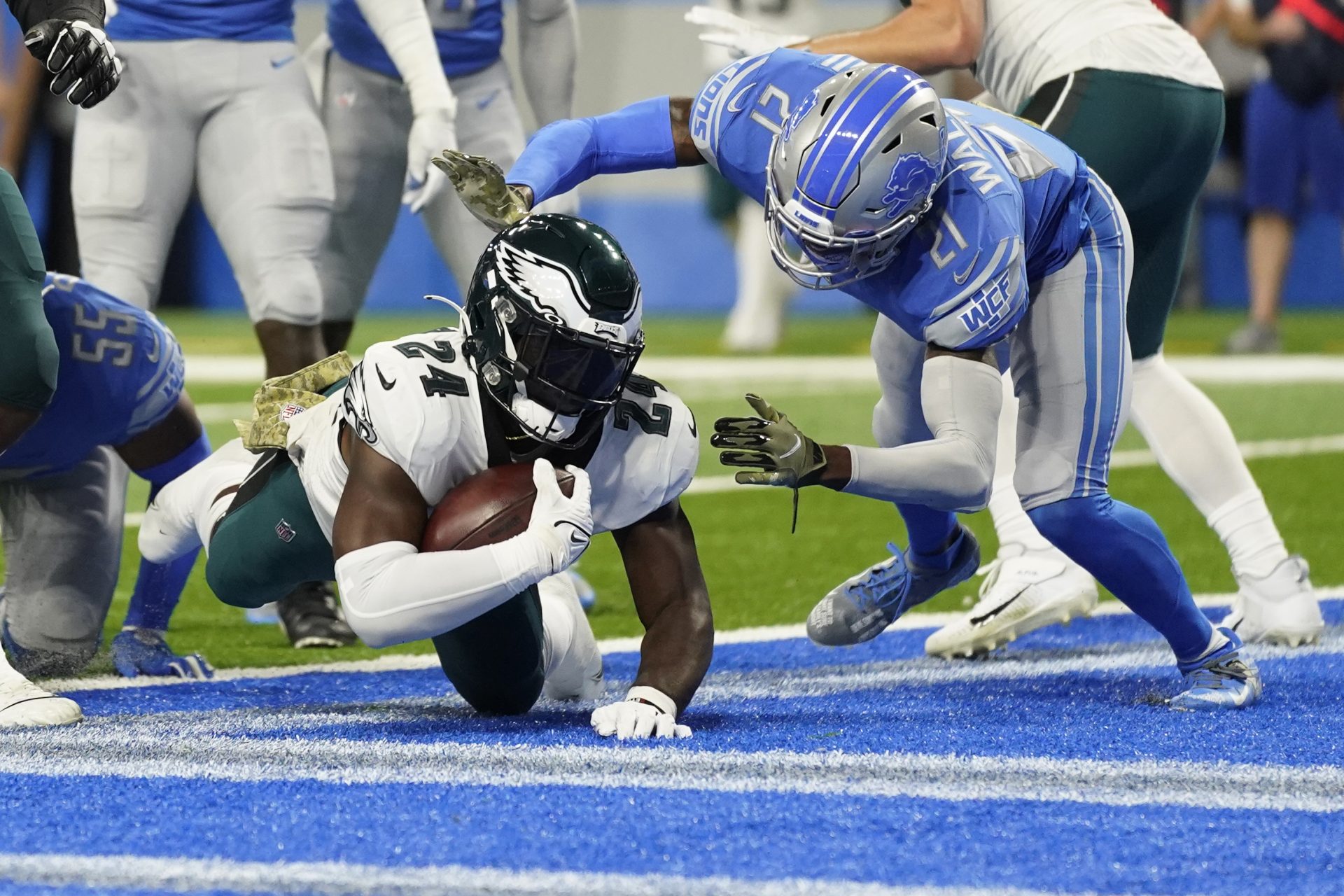 Philadelphia Eagles running back Jordan Howard (24) falls into the end zone for a 4-yard touchdown run as Detroit Lions free safety Tracy Walker III (21) defends during the first half of an NFL football game, Sunday, Oct. 31, 2021, in Detroit.

The Eagles can run the ball effectively when their coach commits to it, even with backup running backs, because their offensive line is built for it. They controlled the line of scrimmage against Detroit, opening big holes for whoever got the ball.

After a 38-point victory, the Eagles don’t have to do anything much better. But it’ll take a consistent, strong effort to beat other opponents. The Lions are winless for a reason.

Howard, who was on the practice squad the first seven weeks, took advantage of his first opportunity this season. The veteran back should get more opportunities.

Linebacker Alex Singleton played a season-low 21 snaps and had no tackles. Singleton’s snap count has gone down in five straight games.

The Eagles host the Los Angeles Chargers (4-3) on Sunday. Los Angeles lost two in a row, sandwiched on either side of a bye week.