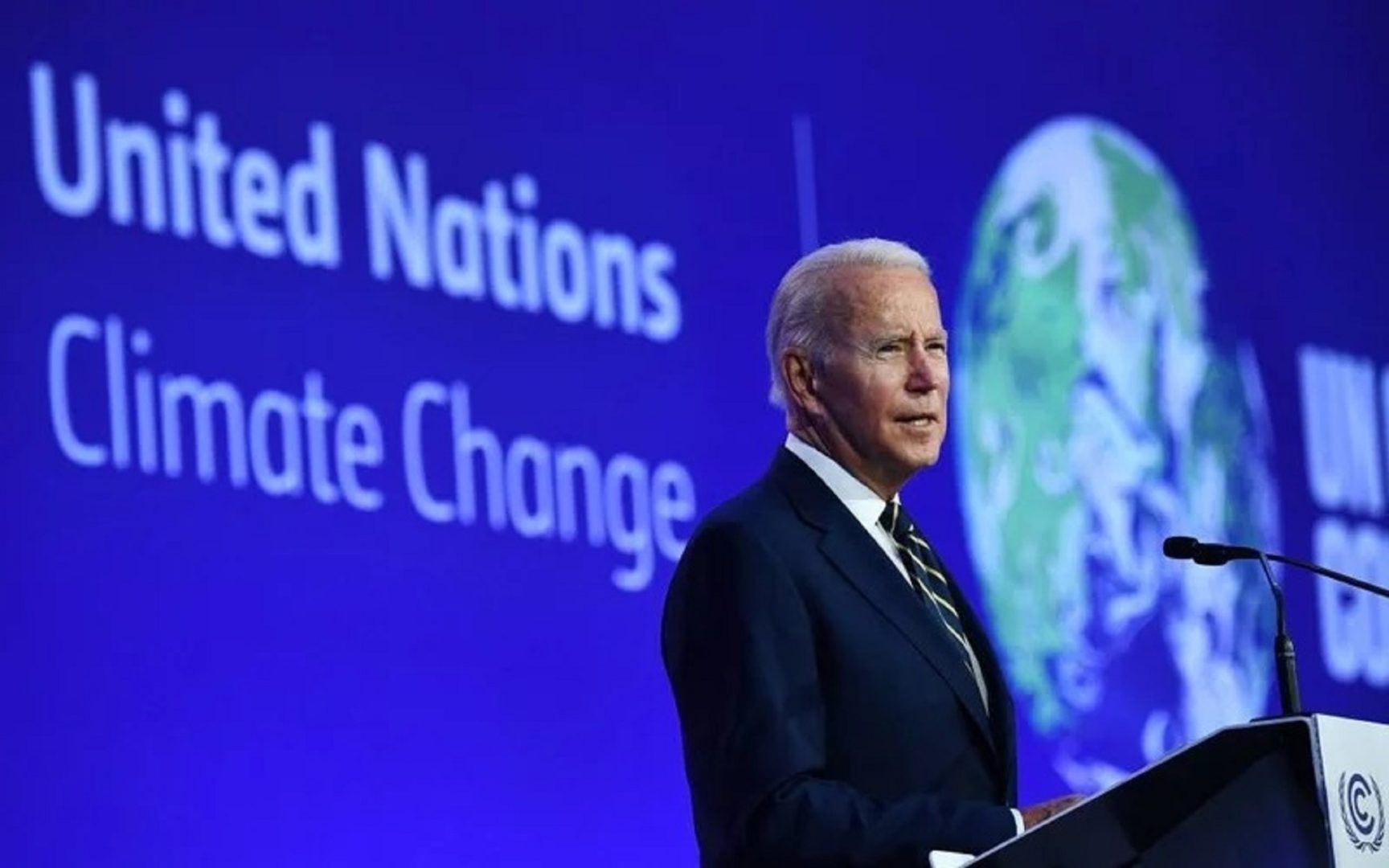 (Glasgow) – President Biden pledged sharp cutbacks in U.S. carbon emissions, telling delegates to the U.N. climate summit in Glasgow, Scotland, on Monday that “there’s no more time to hang back or sit on the fence or argue among ourselves.”

Biden reiterated that the U.S. will reduce carbon emissions by 50%-52% below 2005 levels by 2030. The action, he said, “will demonstrate to the world” that the U.S. is “not only back at the table” but will “hopefully lead by the power of our example.”

“I know it hasn’t been the case,” Biden said pointedly, adding that his administration “is working overtime to show that our climate commitment is action, not words.”

Biden told delegates at the COP26 summit that the U.S. will also seek to become a “net-zero emissions economy” by no later than 2050. “We want to do more to help countries around the world, especially developing countries, accelerate their clean energy transition, address pollution and ensure the world,” he said.

Biden touted his legislative proposals, still awaiting passage by his fellow Democrats in Congress, that would allocate more than $500 billion to addressing climate change, which he called “the most significant investment to deal with the climate crisis that any advanced nation has made. Ever.”

Biden concluded his 11-minute speech with a twist on his usual closing sentiments, saying, “God bless you all, and may God save the planet.”

There’s a lot more work ahead

While Biden cast the summit as a historic inflection point, his top national security adviser, Jake Sullivan, had a more pragmatic take, saying that Glasgow was only a starting point to reach climate goals. “We’re going to have to come back in ’22, ’23, ’24, ’25, ’26, ’27, ’28, ’29 and ’30 to ultimately be able to achieve what’s necessary to achieve,” he told reporters traveling to Scotland with Biden.

Biden also plans to launch a new program to help developing countries adapt to climate change that he hopes will provide $3 billion in financing per year by fiscal 2024, the White House said. The program, known by the acronym PREPARE for the President’s Emergency Plan for Adaptation and Resilience, will need the approval of Congress. There also will be new commitments from private sector companies to help with finance, said John Kerry, Biden’s special envoy for climate.

Biden told reporters on Sunday that the United States would be able to meet its climate goals even though a key measure was cut from his sweeping spending package of climate incentives and social safety net programs.

That package, combined with an infrastructure bill that has been passed by the Senate, together contain $900 billion in climate and resilience measures, he said. Democrats, who hold a narrow majority in the U.S. Congress, have not yet agreed to the size and scope of the package, though Biden said he was confident they would vote on it in coming days.

Still to come during this year’s summit

The summit, known as COP26, lasts for two weeks. Biden is in Glasgow for two days, meeting with leaders to press them to take bigger steps to cut their emissions. Over the next two weeks, more than 10 of his Cabinet secretaries and agency heads will be at the summit, as well as more than 50 members of Congress, Kerry said.

Kerry said the United States plans to work with a number of countries to help reach targets, such as:

Kerry said that countries representing 65% of global GDP have signed on to the goal of limiting global warming to 1.5 degrees Celsius (2.7 degrees Fahrenheit).

“Obviously, if you have 65% in, you got 35% out, and that’s the challenge coming out of Glasgow,” he said. “Can those countries step up? How fast will they step up? What will they pledge to do over the course of the next years?”