U.S. President Joe Biden poses for a selfie with medical personnel and other world leaders during a group photo at the La Nuvola conference center for the G20 summit in Rome, Saturday, Oct. 30, 2021. The two-day Group of 20 summit is the first in-person gathering of leaders of the world's biggest economies since the COVID-19 pandemic started. (AP Photo/Gregorio Borgia)

The G-20 gets together for the 1st time since the pandemic. Here’s what you missed 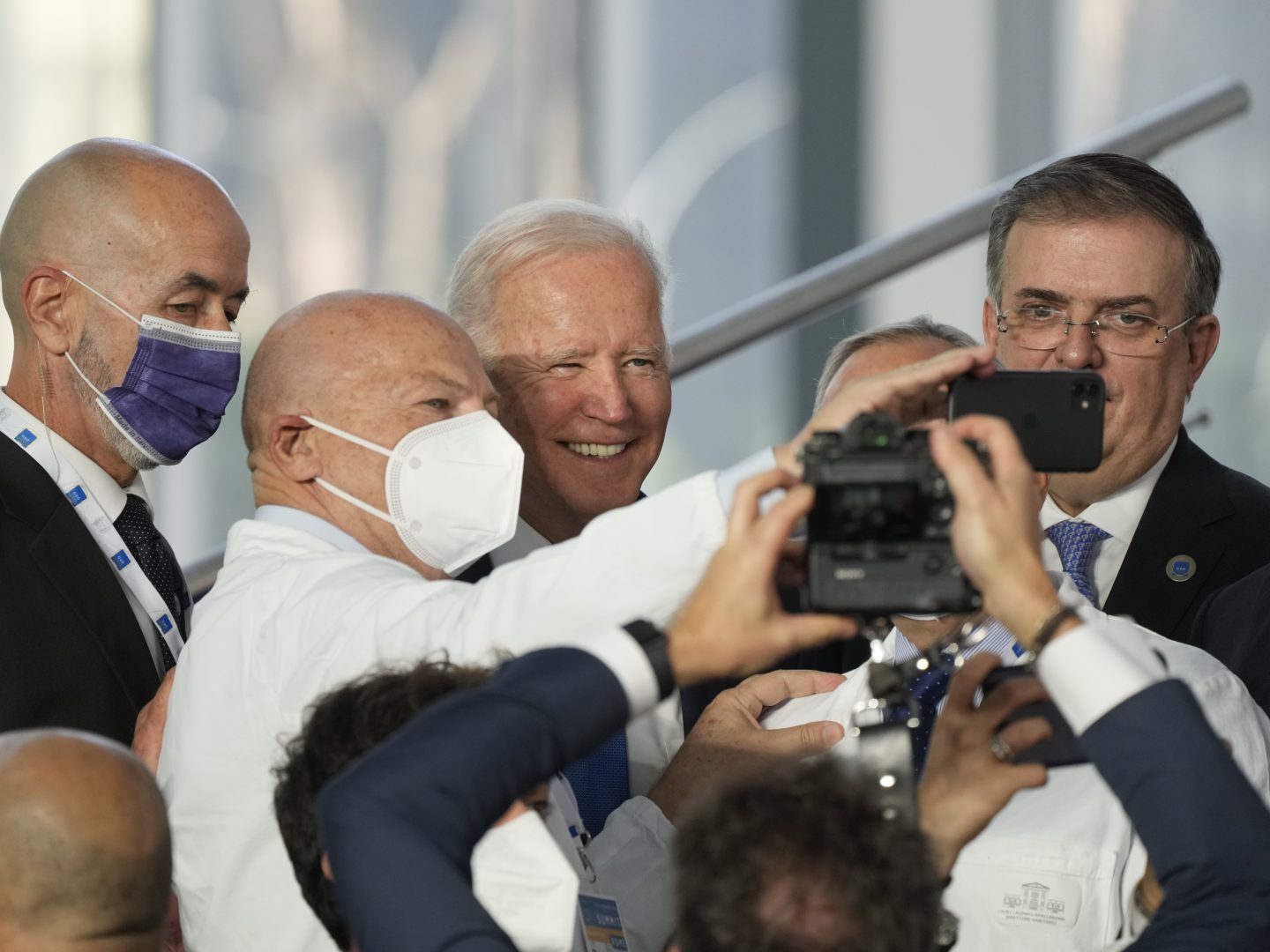 U.S. President Joe Biden poses for a selfie with medical personnel and other world leaders during a group photo at the La Nuvola conference center for the G20 summit in Rome, Saturday, Oct. 30, 2021. The two-day Group of 20 summit is the first in-person gathering of leaders of the world's biggest economies since the COVID-19 pandemic started. (AP Photo/Gregorio Borgia)

(Rome) — It has been a couple of years since world leaders have been able to get together at the G-20. And like most gatherings since the COVID-19 pandemic started, there were some awkward moments in Rome on Saturday as people tried to figure out when they should wear masks, whether to shake hands and how close they should get to one another.

Each leader walked down the red carpet into La Nuvola, the convention center named after a cloud-like structure floating inside of it, toward Italian Prime Minister Mario Draghi. Canada’s Justin Trudeau bowed slightly from his waist as he greeted the host. India’s Narendra Modi went in a for a hug. Germany’s Angela Merkel stuck with a fist bump. Argentine President Alberto Fernandez forgot to take off his mask for the photo, until Draghi nudged him.

Draghi invited a group of first responders in white lab coats and uniforms to join the traditional “family photo” that takes place at the beginning of each summit — a symbol of the central issue that the leaders will be addressing.

“I’d like to say that it’s great to see you, all of you here, after a difficult few years for the global community. The pandemic has kept us apart, as it did with all our citizens,” Draghi told the other leaders before cameras were shooed out of the room.

“We can finally look at the future with great — or with some — optimism,” he said.

President Biden and British Prime Minister Boris Johnson talk prior to the opening session of the G-20 summit.

The G-20 leaders are poised to formally endorse a new global minimum tax of 15% on corporations — a move aimed at cracking down on tax havens. “We reached a historic agreement for a fairer and more equitable tax system,” Draghi said as he opened the summit.

For the United States, the White House estimates this could bring $60 billion in revenues per year, and it’s part of what Biden and Democrats hope will help pay for new spending on social programs and climate measures. Of course, Congress will first need to pass that package, which includes new tax measures like this.

A senior administration official said Biden told leaders at the summit that “while we don’t see eye to eye on every issue, we can tackle shared interests.”

Not everyone made the trip to Rome. China’s Xi Jinping isn’t traveling outside the country during the COVID-19 pandemic, and Russia’s Vladimir Putin didn’t leave home either.

“I think you’ll see the U.S. and Europe front and center at this G-20 as we deal with the fact that neither the leaders of Russia nor China will be present in the room,” said Jake Sullivan, President Biden’s national security adviser, talking to reporters on Air Force One on the way to Italy. “That dynamic will be interesting to watch unfold.”

Thousands of activists are in Rome looking to bring attention to a number of issues including climate change and economic inequality.

Some climate protesters briefly staged a sit-in on the main route to the summit on Saturday, according to the The New York Times.

Climate activists try to block traffic on a main road leading to La Nuvola, the Rome convention center where the G-20 summit is taking place.

After the G-20 wraps up, Biden will head to the U.N. climate summit in Glasgow, Scotland, where he’s expected to press world leaders to commit to drastically cutting greenhouse gas emissions.

But that message will be complicated by the fact that Biden has been unable to pass significant climate legislation in the United States. Democrats scrapped one key proposal that would have fined power companies for continuing to use fossil fuels after the measure faced opposition from Democratic Sen. Joe Manchin of West Virginia.

President Biden leaves Saint Patrick’s Church after attending mass on Saturday in Rome on the sidelines of the G-20 summit.

President Biden attended Mass at St. Patrick’s Church on Saturday, after a day of sessions with G-20 leaders.

Biden, a devout Catholic, often attends Mass on Saturdays when he is at the White House or at his home in Delaware.

Biden’s views on abortion and same-sex marriage have left him at odds with some Catholic clergy.

Despite that, Biden said that Pope Francis told him during their meeting on Friday that he should continue to receive communion.

Biden to meet with Turkey’s Erdogan

The two leaders will discuss Syria, Libya and Turkey’s desire for new weapons.

Relations between the U.S. and Turkey have been strained in recent years. The U.S. sanctioned Turkey last year after Erdogan bought Russia’s S-400 missile system.

Earlier this year, Biden angered the Turkish government when he declared the slaughter of Armenians by Ottoman Turks a century ago “a genocide.”

Bidens wrap up day at gala dinner for G-20 leaders

The dinner at the gala included salmon marinated with herbs and fennel, risotto with pumpkin and white truffle, and tangerine cream dessert, according to the White House.

The dinner was closed to press. But Biden tweeted out a picture with Mattarella and Italian Prime Minister Mario Draghi and their wives.

Jill and I are honored to join the Mattarellas and Draghis at the G20 Summit Leaders Dinner. pic.twitter.com/FrnZUmFFsc