President Joe Biden speaks about his domestic agenda from the East Room of the White House in Washington, Thursday, Oct. 28, 2021, as Vice President Kamala Harris looks on. 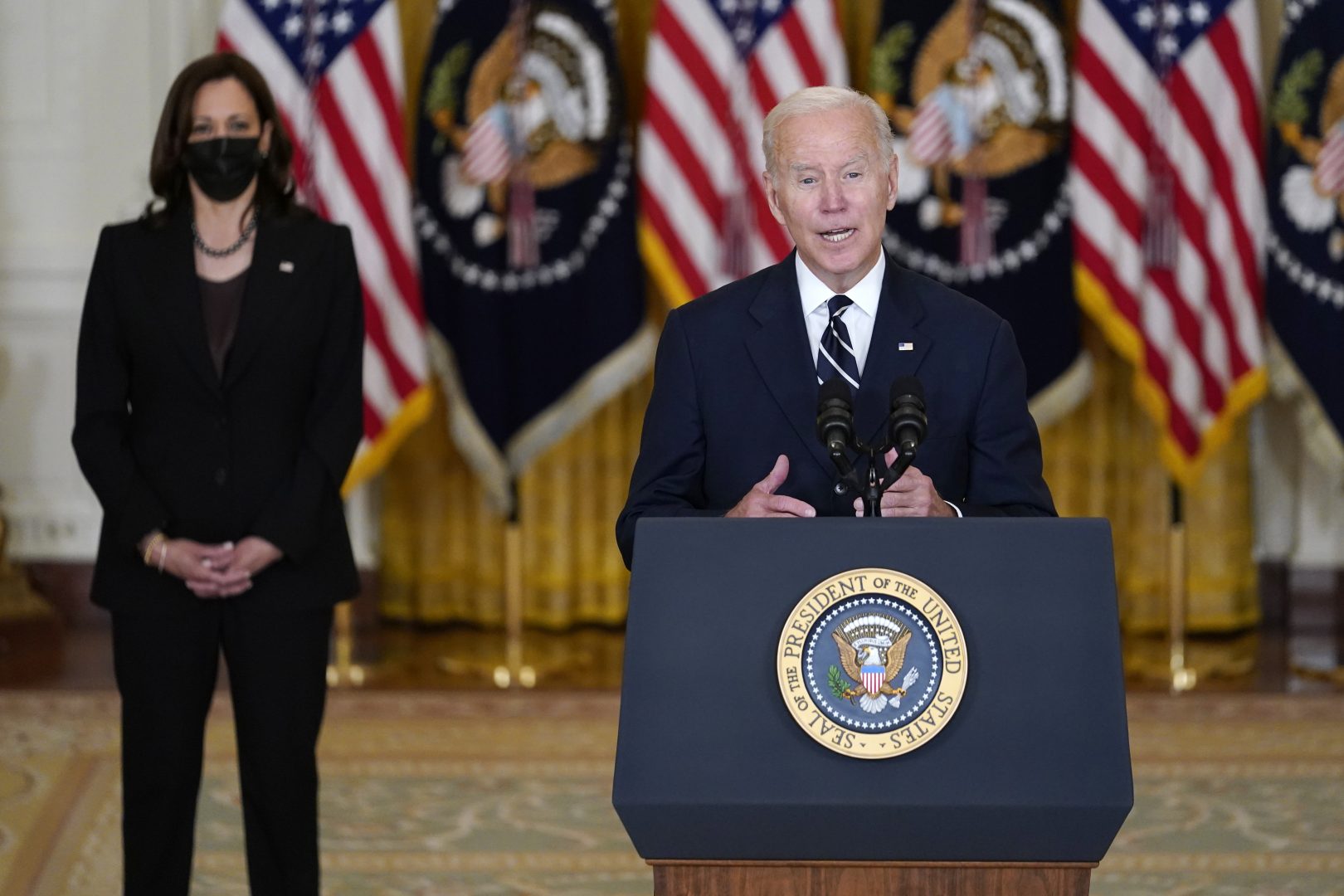 President Joe Biden speaks about his domestic agenda from the East Room of the White House in Washington, Thursday, Oct. 28, 2021, as Vice President Kamala Harris looks on.

(Washington) — President Biden released a smaller plan for a domestic policy bill that sweeps up some of his top priorities. After months of infighting, there is a new sense of urgency and optimism that a deal is within reach — one that could pass the House and Senate later this fall.

Biden on Thursday announced a $1.75 trillion framework — a scaled-back version of his initial $3.5 trillion “Build Back Better” plan.

Democrats are using a budget process known as reconciliation to get around a GOP filibuster in the Senate, so they need all 50 senators who caucus with the Democrats on board with the framework. Opposition from two key Senate moderates — Sen. Joe Manchin, D-W.Va., and Sen. Kyrsten Sinema, D-Ariz. — forced leaders and the president to trim programs, and lower expectations for those on the left. 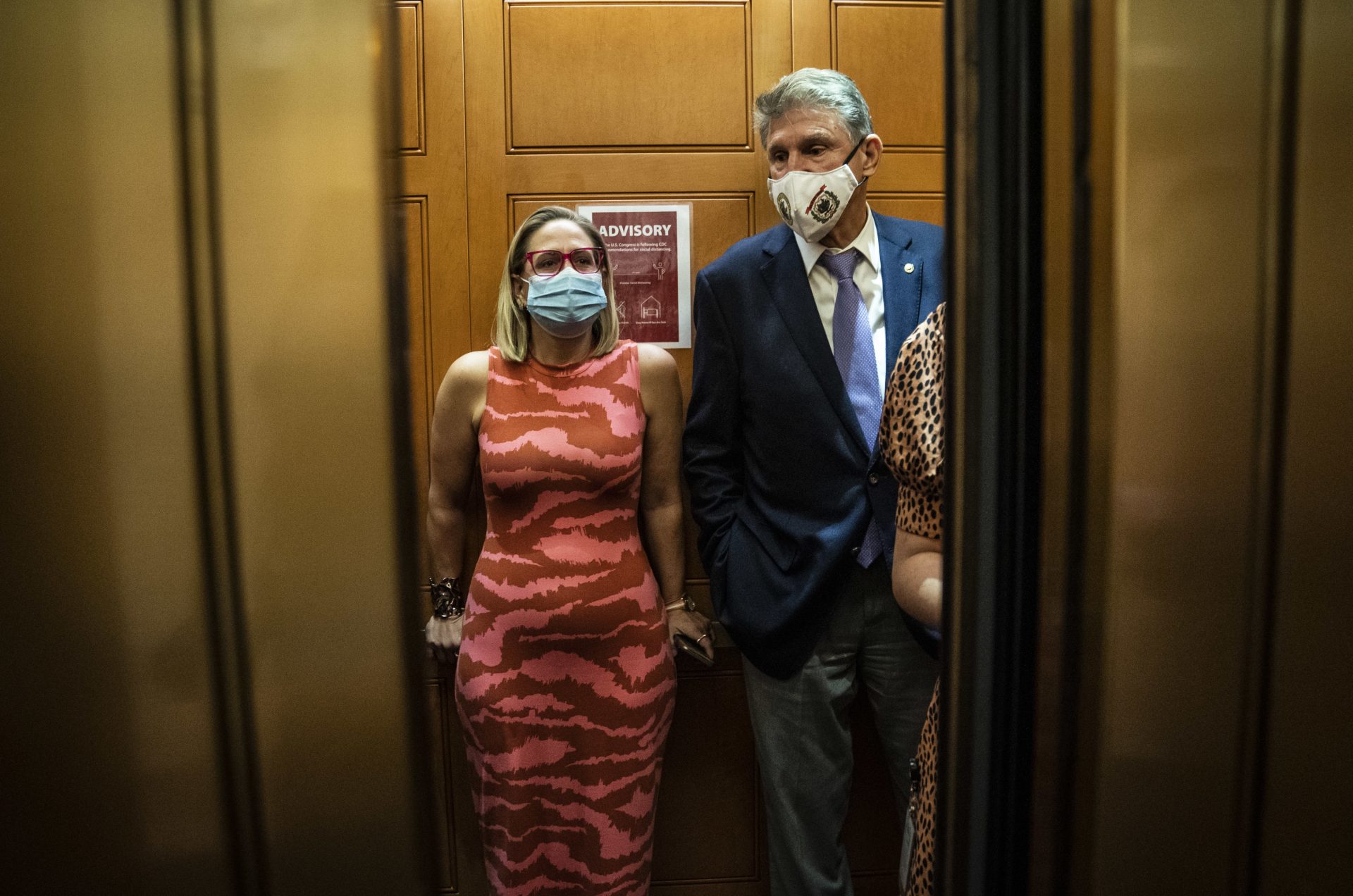 WASHINGTON, DC – SEPTEMBER 30: Sen. Kyrsten Sinema, D-Ariz., and Sen. Joe Manchin, D-W.Va., board an elevator after a private meeting between the two of them on Capitol Hill on Thursday, Sept. 30, 2021 in Washington, DC. (Photo by Jabin Botsford/The Washington Post via Getty Images)

Here’s a snapshot of Biden’s latest plan, with more details on the fate of major policy proposals below:

Taxes that would help pay for the plan

A deeper look at key provisions

Child care gets squeezed; paid family leave is out

The expanded child tax credit that was enacted as part of this spring’s coronavirus relief package has been credited with dropping child poverty rates. Democrats view it as a key policy achievement. Biden had hoped to extend it for four more years.

The president’s framework extends the child tax credit and the earned income tax credit for one year.

Many Democrats believe the popularity of the policy and the immediate impact will make it tough for Republicans to roll it back if they take control of one or more chambers in the 2022 midterm elections.

Paid family leave is no longer part of the president’s framework. During a CNN town hall in Baltimore last week, Biden said “it is down to four weeks.” He had originally proposed 12 weeks. Sen. Kirsten Gillibrand, D-N.Y., told reporters she was unable to persuade Manchin to agree to keeping some paid family leave in a deal, but she planned to continue fighting for something in a final bill.

Universal pre-K programs are expected to remain in the proposal, and Pelosi linked them to the child care and family leave proposals as a comprehensive effort to support working parents, and as critical “human infrastructure.” 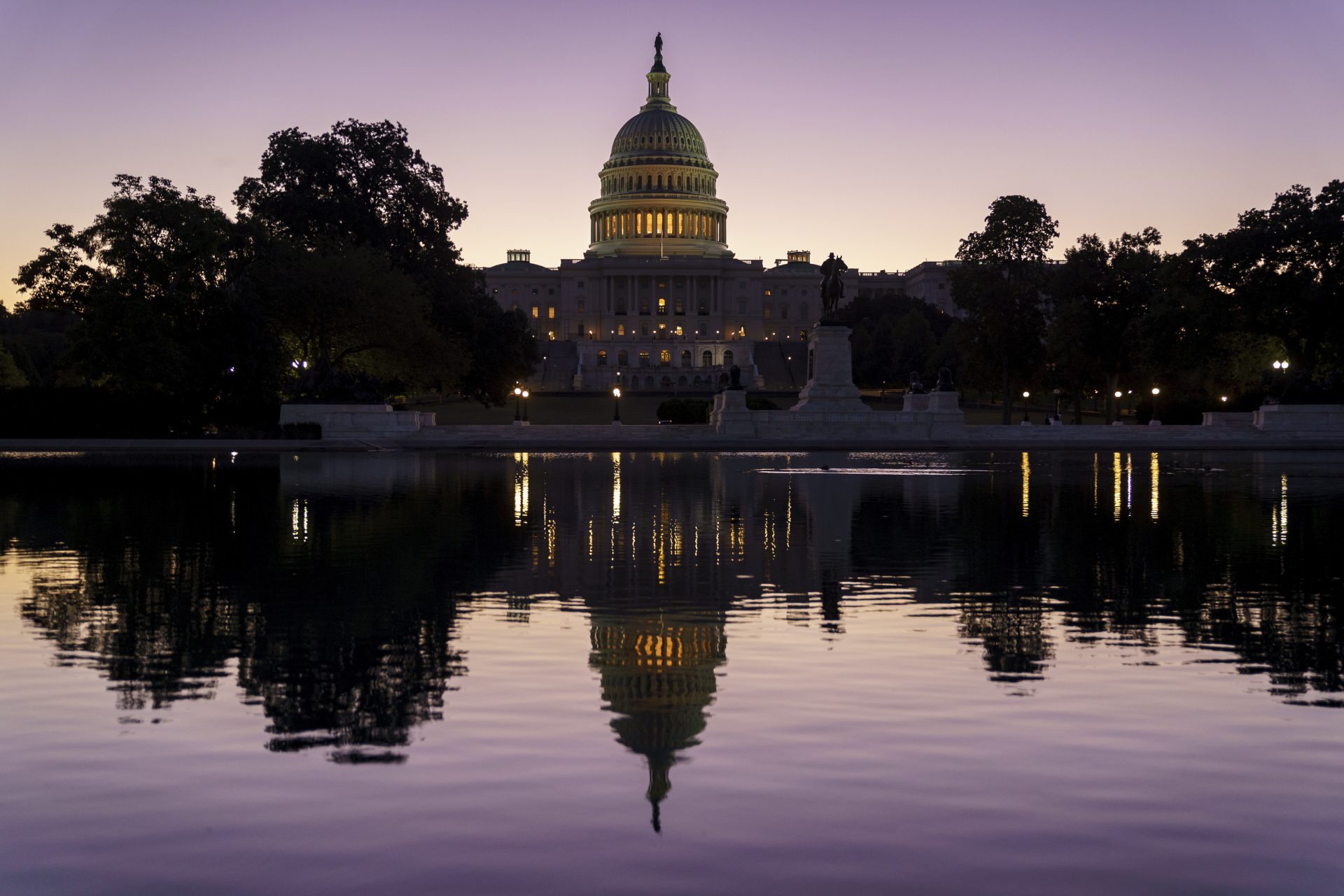 Climate change provisions are scaled back

The president had touted the Clean Energy Performance Program (CEPP), which provides incentives for utility companies to switch to greener technologies and fines those who don’t, as the centerpiece of his climate agenda. He saw it as a tool that could achieve his goal of reducing greenhouse gas emissions by 50% by 2030. But the program has been dropped because Manchin, who represents a state heavily reliant on coal production, doesn’t support it.

House Speaker Nancy Pelosi downplayed that concession, and insisted there are other ways to get to that goal.

“It isn’t about a particular plan. It’s about reaching our goals and how we do it. I feel very satisfied the path we’re on to do that,” she said Thursday.

Biden, Pelosi and other congressional Democrats are scheduled to travel to the COP26 climate change conference in Scotland in the next week, so negotiators had to find various other proposals that Manchin can back — a mix of tax credits and other programs — and that can show world leaders the U.S. is making good on its climate goals. The White House is also discussing some administrative actions they can take that wouldn’t require congressional approval.

Some health care programs stay, but not all

There are three main health care programs that Democrats say they intend to keep in a final deal — the Affordable Care Act, Medicare and Medicaid. But as the number shrinks on the overall package the challenge on how to structure these plans will be steep.

Pelosi, who steered the Affordable Care Act through the House and views it as a legacy issue for her, has pushed to make subsidies for the program permanent. But the scaled-back plan included an extension of these tax credits only through 2025.

Budget Committee Chairman Bernie Sanders, I-Vt., proposed to expand Medicare to cover vision, hearing and dental procedures. The costs for all three could prove too expensive in this smaller package. Biden said it would be a “reach” to get all three. The president’s framework includes coverage for hearing care, but not for dental or vision — something Sanders said was still concerning to him.

Democrats have also said Medicaid coverage is also expected to be expanded, but gave few details.

Pelosi on Sunday noted that the Medicare piece is still part of the negotiations, but said “dental is very expensive” and said while all three coverage items were in play, “dental will take a little longer to implement” — perhaps five or six years.

The Democrats’ original bill included a plan for two years of free community college, but it is one item that both progressives and moderates said was not going to make it into a final deal. The president noted to lawmakers that the proposal was a personal priority for the first lady, who still teaches at a community college in northern Virginia. But the idea was not able to get broad support in his meetings.

Democrats do plan to include some funding for Pell grants and vocational programs in their reconciliation package. 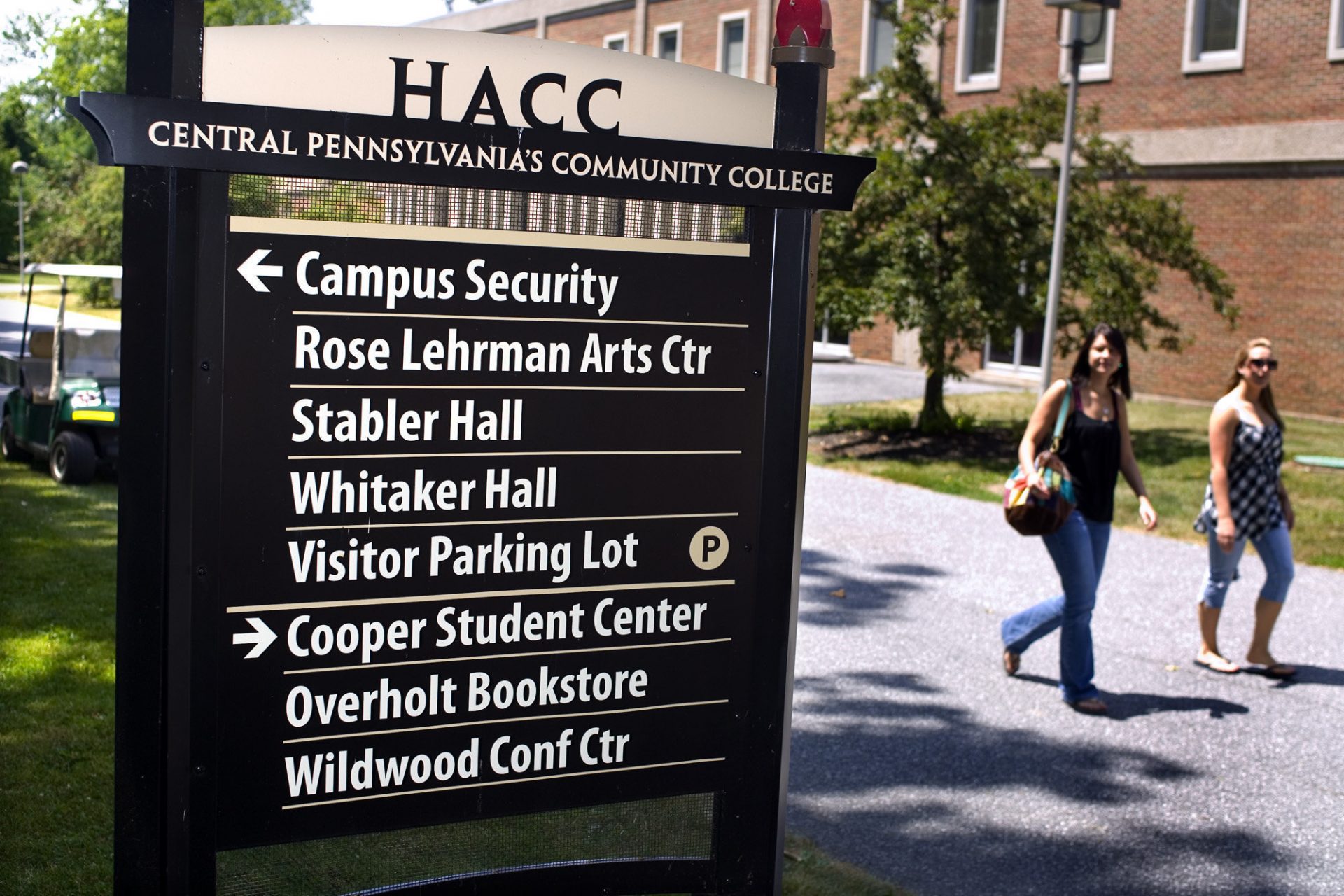 The Harrisburg Area Community College — which serves more than 17,000 students on campuses in Harrisburg York, Lancaster, Lebanon and Gettysburg — has eliminated all on-campus mental health counseling, a move experts said was risky at a time of growing demand.

Ways and Means committee Chair Richard Neal, D-Mass., met with Sinema last week to discuss a range of ideas to pay for the bill following the Arizona Democrat’s insistence that she could not back an increase in the corporate tax rate. She’s also been in regular talks with White House officials and those negotiations appear to have made some major progress in terms of details.

A source familiar with her thinking tells NPR Sinema agreed to provisions in each of the president’s four proposed revenue categories — international, domestic corporate, high net worth individuals and tax enforcement. These would add up to enough revenue to cover the roughly $2 trillion cost of the bill being negotiated now. One example is a provision targeting billionaires who have not paid taxes on unrealized capital gains, according to the source.

Neal said Sinema, who has made few public comments on her specific positions, shared his sentiment that they needed to get a deal. He said he told her this needs to pass, and she said, “I couldn’t agree more.”

Pelosi and on CNN on Sunday she was confident Democrats could agree on a way to pay for the bill without the increase on corporate rates. “We probably will have a wealth tax,” Pelosi said. She estimated that a so-called billionaires tax could bring in roughly $200-250 billion, and said stepped up enforcement, overseas taxes and other items could generate the rest of the revenue to pay for the close to $2 trillion package. The speaker said Democrats could use an increase on corporate taxes in a future bill.

Leaders continue to say they believe they will be able to stick to their goal of getting a framework that Manchin, Sinema and the White House can sign off on.

And it’s not just Senate Democrats that need to stay united. Pelosi also has little room to maneuver in the House with only a three-seat vote margin.

Right now Brown is focused on another issue for the package: investments in public housing and help for first-time home buyers. “It will greater supply of housing and more affordable housing.” He said regardless of what the final number on the bill will be “it will be the biggest investment “in housing that will span urban, suburban and rural areas.

Still, it’s an example of why getting to an agreement on a final framework may be difficult. There are many issues Democrats want to see in this bill, while staying under $2 trillion.

There is a lot of pressure on Democrats to get this done soon. An extension for funding for highway programs runs out on Oct. 31 so Democratic leaders are pushing to wrap up talks on the reconciliation package and pass a bipartisan infrastructure bill that has been held up by the House in the meantime.

Virginia Democrats would also like the president to sign the bill ahead of next Tuesday’s gubernatorial election so they can hold up the measure as an accomplishment they have delivered on since taking control of the White House and both chambers of Congress.

US park service, tourism group partner to highlight tribes -- from Pa. to Oregon