State System of Higher Education Daniel Greenstein is questioned by lawmakers of the House Appropriations and Education committees at a hearing in Harrisburg on Oct. 27, 2021

PASSHE’s university merger plan is on track, chancellor says, and needs funding to keep it going 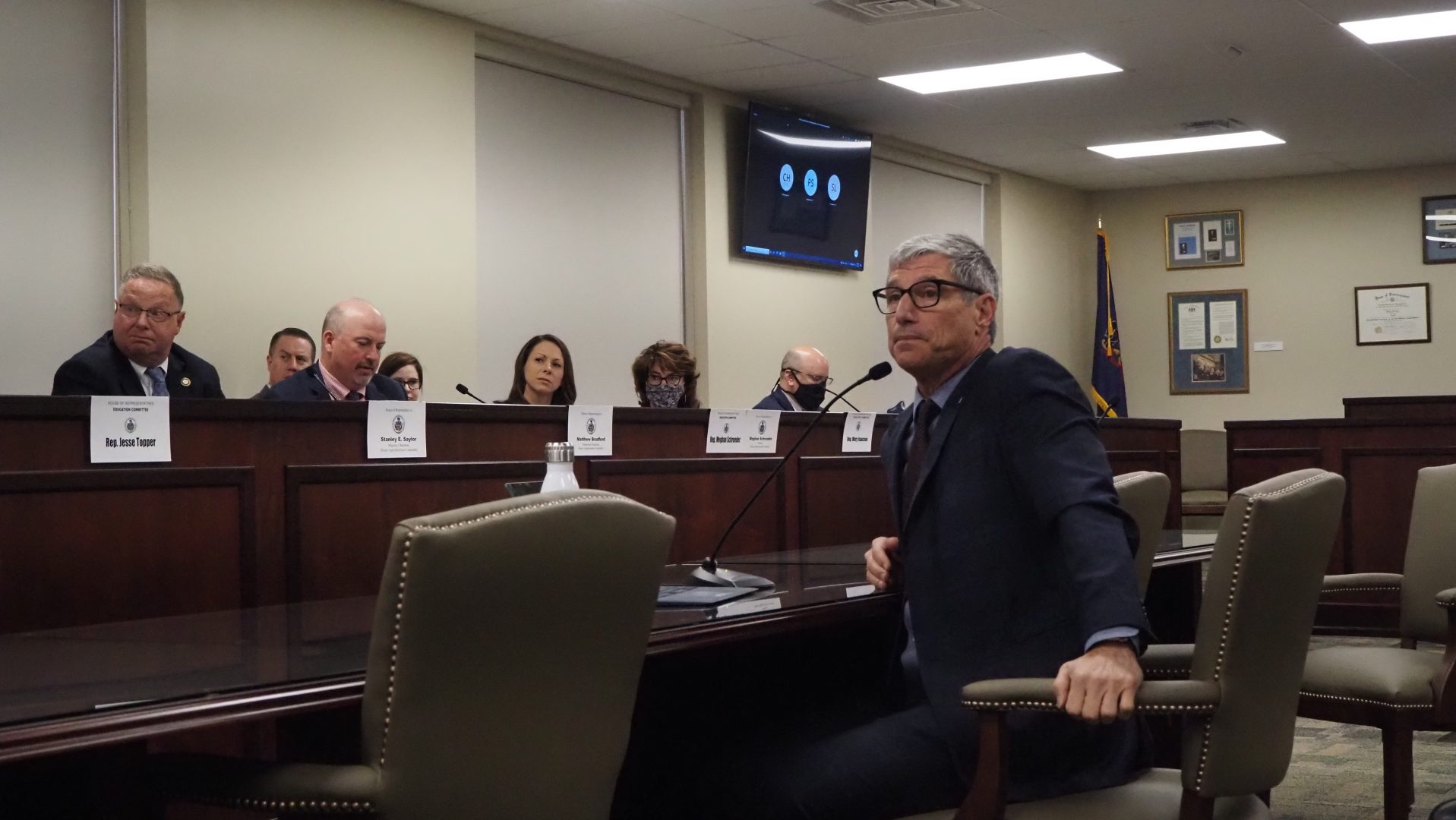 State System of Higher Education Daniel Greenstein is questioned by lawmakers of the House Appropriations and Education committees at a hearing in Harrisburg on Oct. 27, 2021

(Harrisburg) – The State System of Higher Education said Wednesday its university consolidation plan is on track. It’s asking for lawmakers’ support to keep it that way.

In July, PASSHE’s Board of Governors approved a plan to merge six of its 14 universities in the west and northeast into two integrated school systems. Since then, accreditors at the Middle States Commission on Higher Education have been reviewing the plan. If they approve, the NCAA should give the green light for redesigned sports programs at the affected schools.

The two organizations are expected to separately weigh in starting in March.

The western university group also got a brand name this month: Pennsylvania Western University, or Penn West. Under that brand, western schools like Edinboro will now be named “Penn West Edinboro.” There’s no word yet on when branding will be announced for the northeast group.

System Chancellor Daniel Greenstein said it’s all being done with one goal in mind.

“The best way to think about this is to imagine what needs to be in place for students enrolling in the new university in August 2022,” he told House lawmakers during a Wednesday committee meeting. “We need to have an ability to register them in their courses, to have proper advisement…so basically all the functions that [are] essential for opening day.”

Clarion, Edinboro and California universities, as well as Bloomsburg, Lock Haven, and Mansfield universities, are also working to blend course offerings and in-house tech systems ahead of that expected fall launch. If done well, Greenstein told lawmakers, that will help make the new merged university systems more affordable for students.

“This was never about saving money,” the chancellor said of the consolidation plan. “This was about investing in our students and expanding their opportunity. And right now we have priced our students, our historic[ally] low and middle income students, out of that opportunity.”

That’s part of the reason why PASSHE’s Board of Governors approved a new budget request that asks lawmakers for an extra $73 million next fiscal year. Under the current state budget, the state-owned system is already getting a $200 million boost over the next few years from Pennsylvania’s share of federal coronavirus relief money.

Greenstein told lawmakers most of the extra cash would go to funding the rest of the consolidation plan, and to keep schools from having to cut programs and staff like they’ve had to in the past.

“There needs to be an investment in building the talent base that the state needs to remain economically competitive,” Greenstein said.

The chancellor estimated 28 faculty and staff were laid off system-wide just last year.

Rep. Stan Saylor (R-York), who chairs the powerful House Appropriations committee, said majority Republicans could consider that increase as long as PASSHE promises to be “transparent” about what it’s asking for.

“We just want to make sure that we’re moving in a direction that is in the best interest of the parents that are sending their children to these schools and the students that are around, and that they’re really getting degrees for jobs in Pennsylvania,” Saylor said.

Senate Appropriations Chairman Sen. Pat Browne (R-Lehigh) told Greenstein during a Tuesday meeting that he and others were caught off guard by the Board of Governors vote to ask for more funding next year.

“In consideration of additional financial support, we’re hoping those who are asking for it will communicate it…so that we know what we’re agreeing to,” Browne said. “It’s about partnership and transparency.”

“That may not be the exact number they get,” he said during an availability with reporters. “But if additional dollars are warranted by the progress we see, we’d be willing to look at that.”

Greenstein said PASSHE will need a minimum of $550 million to keep itself afloat under its current structure.

Rep. Benninghoff is one of several dozen lawmakers who signed a letter asking Congress to object to Pennsylvania’s electoral college vote — despite no evidence that would call those results into question.