Workers for the cereal company are striking across the country over wages and extended working hours.

Walsh spoke with workers, expressing his support and that of the White House.

“I stand here with you today, on behalf of myself and President Biden, to let you know how much the President cares about and feels for workers in America,” Walsh said on the 22nd day of the strike. 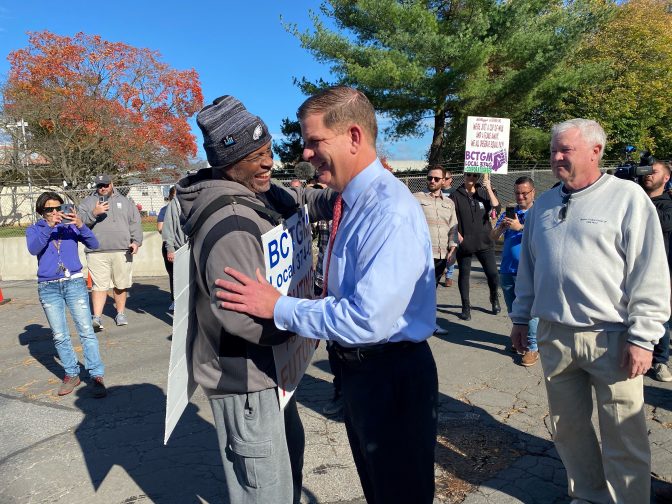 Walsh noted his longtime membership of Boston construction union Local 223 and said he and the president stand behind workers’ right to organize for better conditions and compensation.

Around 360 employees are striking at the plant, a portion of some 1,400 Kellogg employee members of the Bakery, Confectionery, Tobacco Workers and Grain Millers International Union. Other strikes are at plants in Battle Creek, Mich.; Omaha, Neb.; and Memphis, Tenn.

The company has a two-tier pay system with the better compensation being for what it calls “legacy” employees.

During recent negotiations, the company was considering eliminating that system along with a pathway for employees to obtain the pay and benefits given to legacy employees.

A spokesperson for the company said it is disappointed by the strike and that the employees’ pay and benefits are among the industry’s best.

Walsh said he has not been in contact with Kellogg leadership.

“I’ve offered more than one time and around the country and strikes if need be, I will interject myself and try to get these strikes resolved,” Walsh said.

When asked about other strikes happening around the country, Walsh said unions are powerful in setting standards for pay and conditions for all workers. 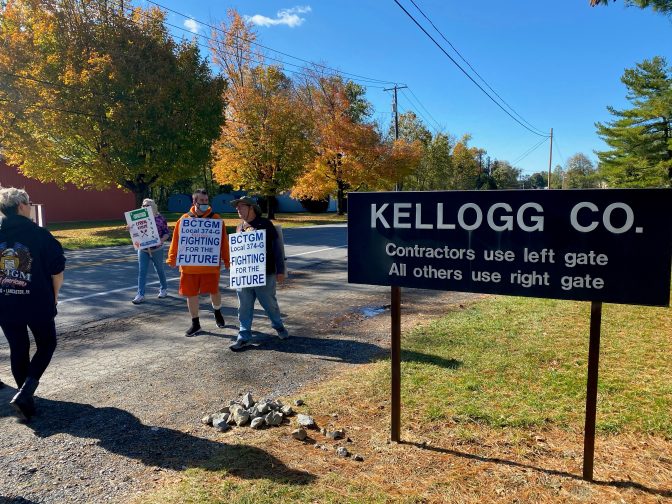 Workers picket in front of the plant, they join some 1,400 other Kellogg employees across the country.

Kelvin Butcher, a machine operator in the packaging department, said he has been forced to work mandatory overtime. Sometimes he and his coworkers work 12 to 16 hours a day, he said.

Sometimes he works seven days a week, while taking on the mandatory overtime. Butcher commutes more than an hour from Chester County, and the long hours sometimes make him stay overnight because he is too tired to drive home.

“You can’t really get anything done [outside of work] because you’re here,” said Butcher, a seven-year employee. “If you have appointments, you’ve got to cancel your appointments, being with our families and stuff like that…we’re here.”

Butcher, 60, said he hopes to retire in coming years and that the contract negotiations will benefit more than just him and his current coworkers.

“It’s for us, but it’s mainly for people in the future, too, so they don’t have to go through that,” he said.

'It was a struggle:' Some Pennsylvania families are still owed money for last year's missed meals