A pro-mask demonstrator, right, speaks with a non-mask demonstrator, left at the Cobb County School Board Headquarters during a pro mask wearing protest, Thursday, Aug. 12, 2021, in Marietta, Ga. Many school districts nationwide have seen parents protesting for and against masks.

A look at the groups supporting school board protesters nationwide

"So little by little it's been escalating — they've been antsy and escalating their hostility and aggression toward the board." 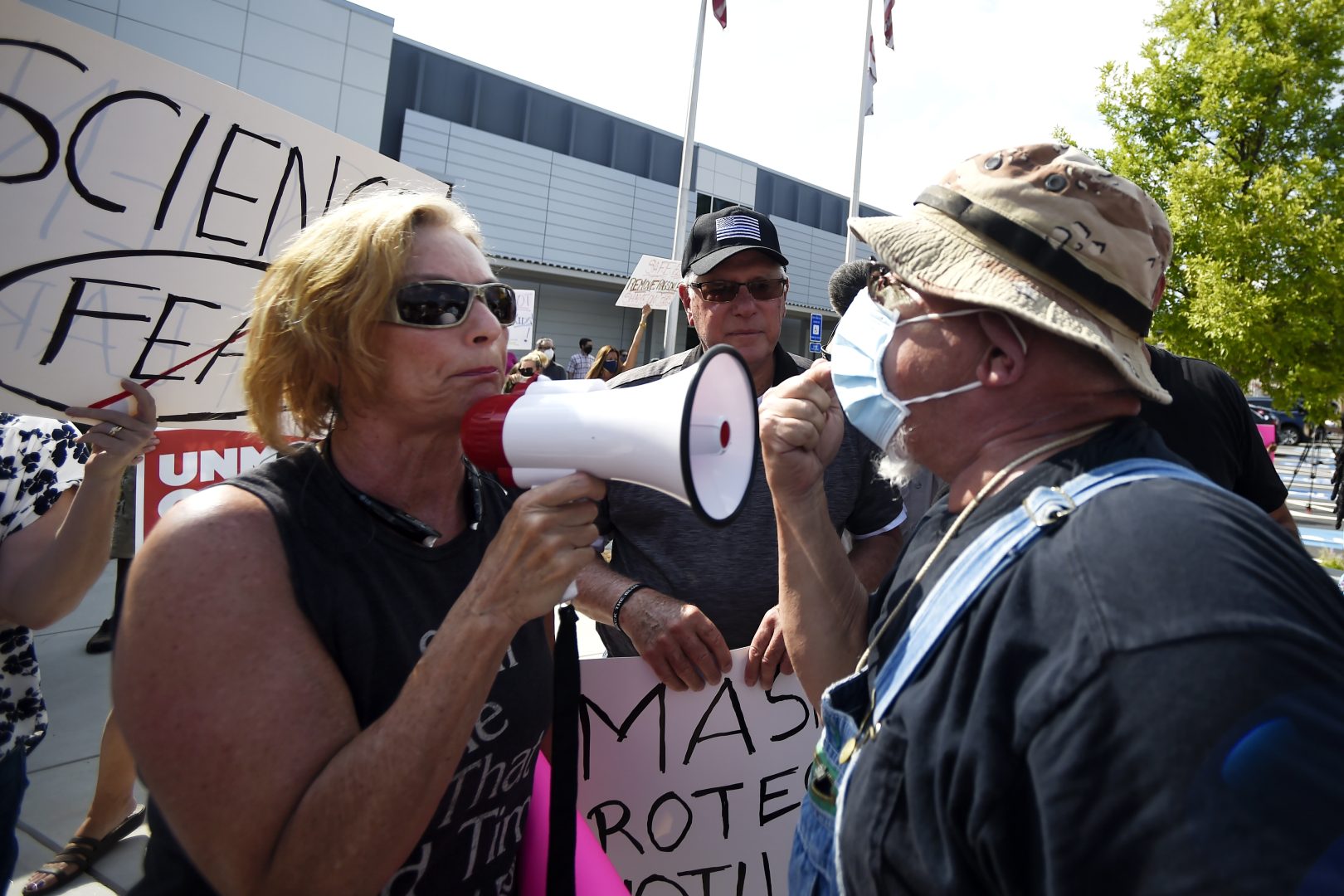 A pro-mask demonstrator, right, speaks with a non-mask demonstrator, left at the Cobb County School Board Headquarters during a pro mask wearing protest, Thursday, Aug. 12, 2021, in Marietta, Ga. Many school districts nationwide have seen parents protesting for and against masks.

(Washington) — The Poway Unified School District, in San Diego County, Calif., was planning a pretty typical school board meeting in September. They were hearing reports from their student representatives and honoring their teachers and other staff members of the year.

Because of the pandemic, the general public has been asked to join and comment via livestream.

That hasn’t stopped protesters from showing up in person.

“In the August meeting, they were pounding on the windows,” said board member Darshana Patel. “So little by little it’s been escalating — they’ve been antsy and escalating their hostility and aggression toward the board.”

In several states and districts around the country, protestors have been disrupting school board meetings. They’re opposed to mask policies. Vaccine mandates. LGBTQ rights. Sex education. Removing police from schools. Teaching about race and American history, or sometimes, anything called “diversity, equity and inclusion” or even “social-emotional learning.”

The protests aren’t ubiquitous, but they’re widespread and intense enough that the National School Boards Association asked President Biden to step in, and Attorney General Merrick Garland then directed the FBI to help.

What happened — what is happening — in Poway is not an isolated incident, but it may take the cake for being “surreal,” as Patel puts it. 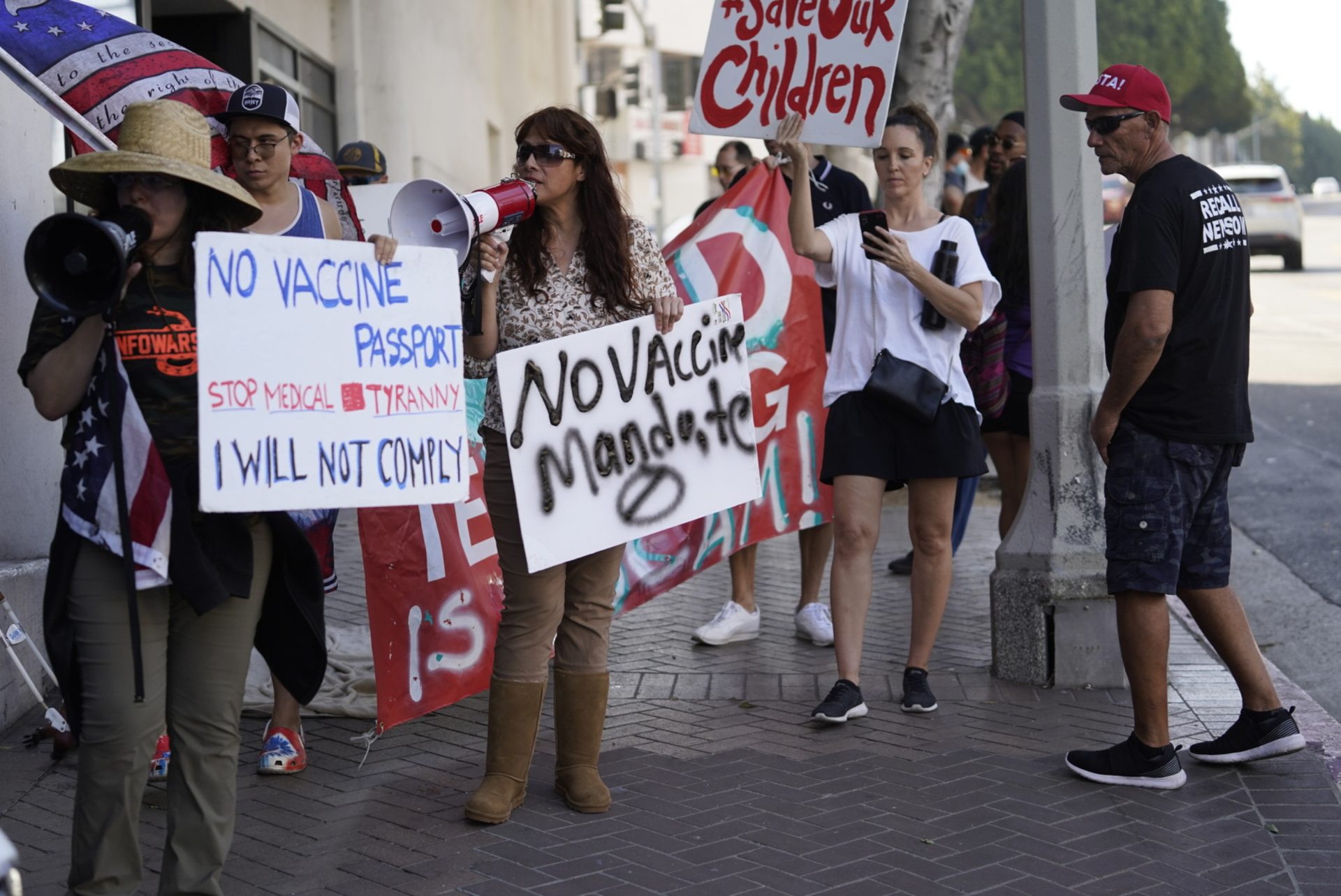 At the board’s Sept. 9 meeting, some protesters followed behind a visitor and got inside the building. Patel and her fellow board members decided that the best way to de-escalate the situation was to immediately adjourn the meeting.

What happened next is documented in an elaborately shot and edited video posted to YouTube:

“So we are the people,” says a man in a black baseball cap and black T-shirt. “So we can go ahead and replace the board. Let’s take a vote–who’s willing to become the president?”

Another man steps up, wearing a T-shirt that says Let Them Breathe, with a yellow smiley face on it.

He gives his name as Derek Greco. The protestors vote, “Aye!” to make him the new “school board president.”

Later that night, Greco, who could not be reached for comment, posted a video to Instagram. In it, he’s breathless and sweaty. “The board vacated their seats tonight. So we then brought in a constitutionalist and we held a quorum and we voted in a new board,” he says. “You are looking at the new president of the Poway Unified School District, apparently.”

“Constitutionalism” is a far-right ideology that means, in essence, that people don’t have to recognize any laws or authorities that they don’t like beyond the Constitution itself. The video continues at a local restaurant, where Greco and some of the others who had just declared themselves the new school board explain that they then “voted” to remove Critical Race Theory from the school — though it is not being taught — and to stop requiring masks. Later, Greco and four others filed notarized oaths of office with the San Diego County Clerk.

The “election” by those protestors on Sept. 9 was in no way legitimate, county officials say, and the properly elected school board continues to run the district.

Melissa Ryan founded the consulting firm CARD Strategies, which tracks right-wing extremism. She says this kind of activity usually begins with real anger — in this case, on the part of parents, at COVID school shutdowns and restrictions like masks. But it’s not entirely grassroots and spontaneous. “The flames are being fanned by national money and resources,” she says. “It’s basically the same groups and funders that were funding the Tea Party and frankly, it’s the same tactics.”

Here are some of the groups providing resources and support to school board protesters around the country. None have endorsed violence, threats or incitement. Nor are they all formally connected. What they do is offer help to parents who have questions or objections about what their children are learning in school or how schools are run. They issue press releases, sell T-shirts and lawn signs, produce flyers and publicize events on social media, supply information and legal advice, offer template letters, scripts for public testimony, and model legislation. They put out webinars and trainings to give practical assistance to those who want to target or disrupt school boards.

The term “critical race theory” specifically refers to an academic theory developed in law schools and usually taught at the undergraduate level. But since the rise of the Black Lives Matter movement, mainstream K-12 education groups and individual districts have indeed started to acknowledge the existence of systemic and structural racism in American society, both through educator professional development and curriculum. 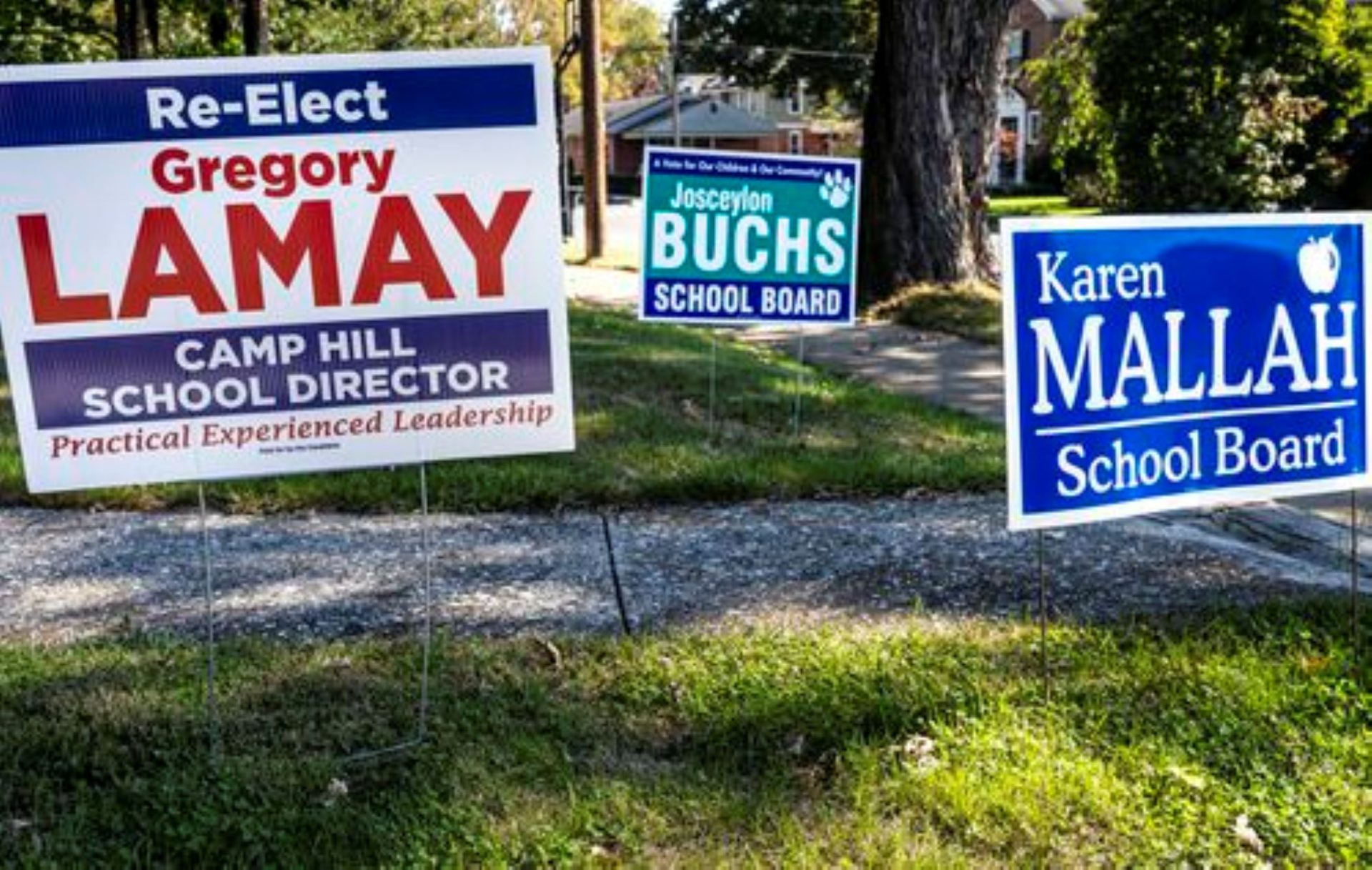 School board races used to be down-ballot sleeper contests. These days, the local races bear much of the national partisan rhetoric, making, in some cases, for combustible local politics. The Camp Hill borough school board race is one local contest being buffeted by hyper partisanship.

The toolkit further says activists don’t need any evidence that “critical race theory” is currently being taught in their local schools in order to mount a campaign against it: “It’s important to note that whether CRT is currently in your school system is mostly irrelevant to the purpose of this document.”

Jill Simonian, the director of outreach for PragerU Kids, says she herself has spoken out at school board meetings, and ultimately pulled her kids out of public school this fall because of what she overheard during Zoom teaching. “They were offering opinions that were very politicized … my previous school was trying to create activists out of my kids. My kids are in elementary school.”

“I think it’s a threat to civil discourse. I think it feels like an intimidation tactic to suppress free speech of parents,” she said. “I think one thing that we can all agree with is that free speech is a fundamental right for everyone to have as long as it’s not violent in any way, and it’s not inciting immediate violence in any way.” 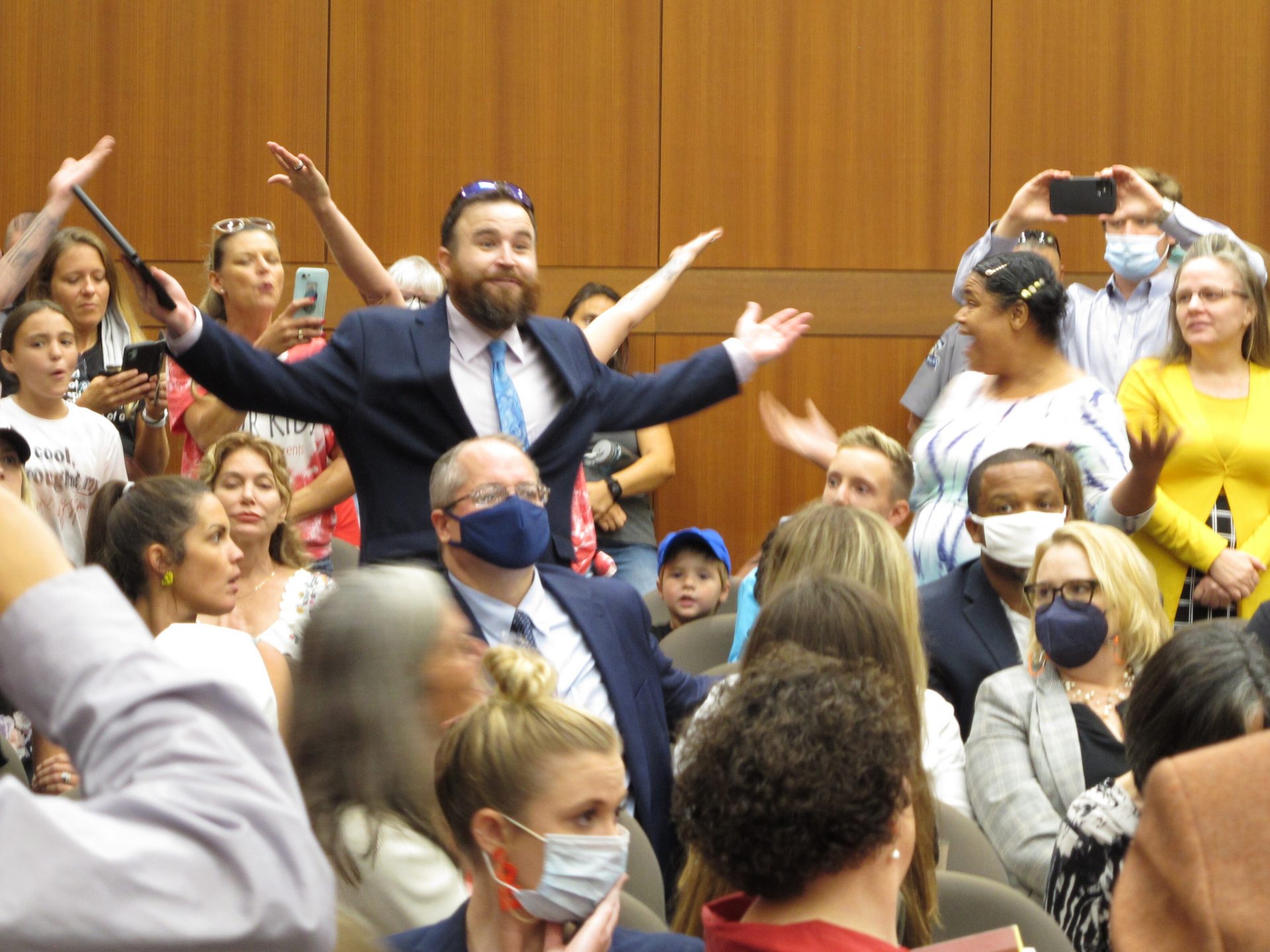 Angry, largely unmasked people objecting to Louisiana Gov. John Bel Edwards’ mask mandate for schools shout in opposition to wearing a face covering at the Board of Elementary and Secondary Education meeting on Wednesday in Baton Rouge, La.

Lawsuits and ‘Let Them Breathe’

In Poway, the protesters held the signs of yet another group. That yellow smiley face on Greco’s T-shirt? It bore the logo of Let Them Breathe, an anti-mask, anti-vaccine-mandate group whose founder is Sharon McKeeman, a mother of four.

McKeeman told NPR, “I had been part of the school reopening movement, and once my kiddos were back in school, I could see they still weren’t back to effective in-person education because of the forced masking.”

Let Them Breathe is fairly new, but it has grown fast. They’ve raised nearly $160,000 in the past three months on GoFundMe. They are suing the state of California alongside a group called Reopen California Schools over the student mask mandate, and the San Diego Unified School District over its student vaccine mandate. They have a podcast that’s also broadcast on a San Diego conservative radio station, and a professional videographer to record their events.

McKeeman says the group is dedicated to peaceful, positive advocacy only. “We had a Smile Fest. We had a couple of marches that were really positive, full of kids, and just to help the community come together and dialogue with each other.”

On its Instagram page, Let Them Breathe has promoted dozens of “Mask Choice Rallies” at school board meetings all over California, including the September one in Poway.

But McKeeman says the organization does not condone what happened that day. She adds that she reached out afterwards to the protesters who were there to “clarify that their viewpoints and actions do not align with Let Them Breathe and to please never attend any of our events or represent that they are affiliated with us in any way.” 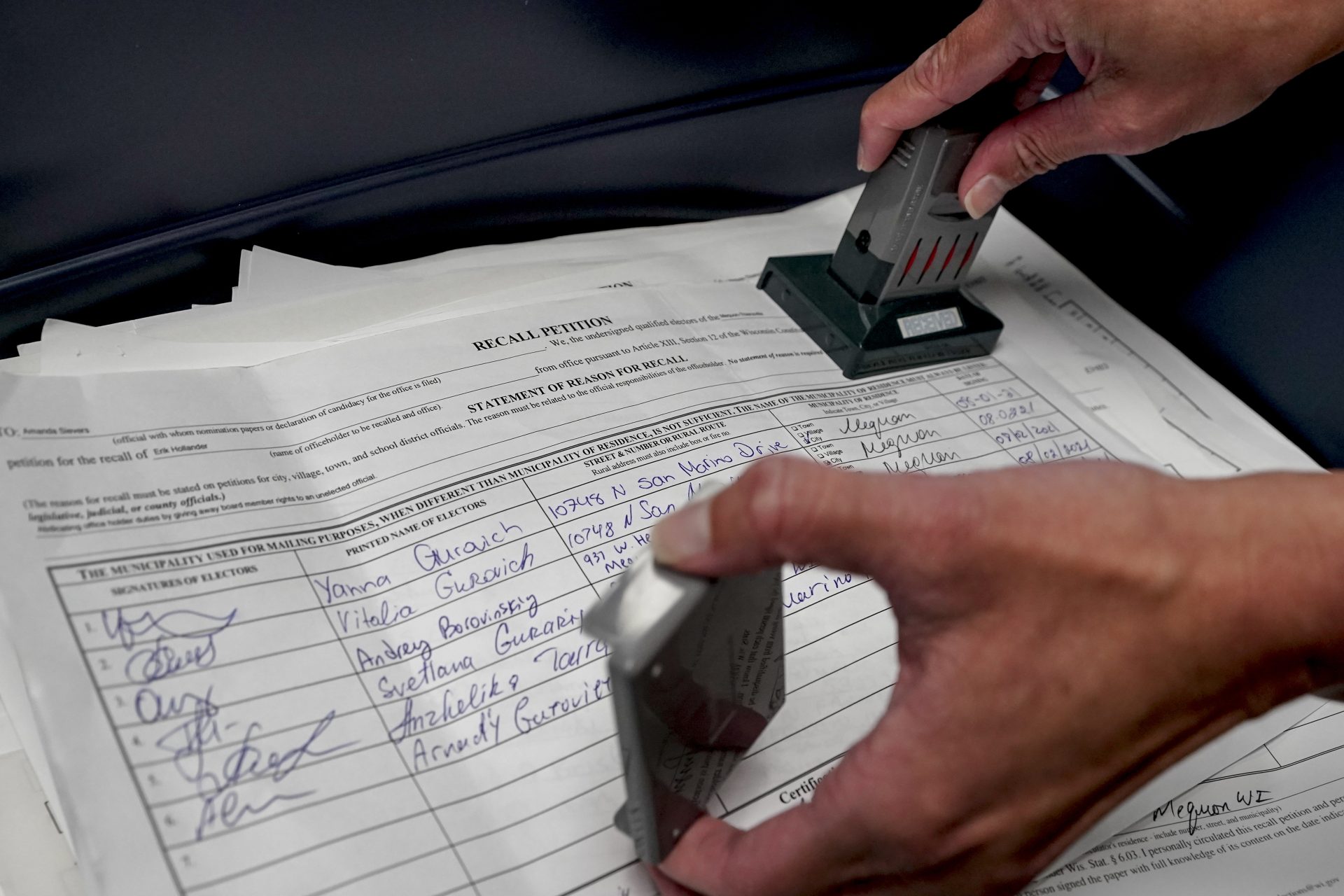 Recall petitions are recorded as received on Monday, Aug. 23, 2021, in Mequon, Wis. The petitions are to recall all of the member of the Mequon-Thiensville School District school board.

‘A knock at the door’

After September’s board meeting, Darshana Patel and a board colleague met with the San Diego City Attorney, who assigned a prosecutor to investigate. Some protestors were escorted out by police in handcuffs at the Oct. 14 board meeting. One of them, in a video posted to Facebook, tells an officer, “You do not have any authority over me. You have no jurisdiction over me.”

Then, on Oct. 19, “all five board members and the superintendent got a knock at the door,” at their homes, says Patel. “And we received a packet of papers from someone impersonating a process server. And it had 16 copies of the same document from 16 different individuals saying that we were abusing children.”

The letters were complaining about the district’s mask and vaccine policies. The letter Patel received begins: “Greetings to the woman Darshana Patel who at times acts as a school board member. This notice serves to address the damage done and still occurring to my young one and others from your acts supporting the issue of the emergency measures of which have been and are being considered … ”

Patel, who has a Ph.D. in biophysics, moved with her family to San Diego from the Bay Area when they were expecting their third child, so she could take a step back from her career and spend more time with her family. But instead, she found herself drawn into public service. And now she’s coping with a situation that seems not so much scary or threatening, as completely irrational.

“Ever since the beginning of public education, where there have been school boards, we’ve had passionate parents come in and give us their opinions and defend their children and speak to their rights and their values,” she says. “We expect that, we welcome it. This is a whole different level.”

Patel says her staff is still afraid of holding a meeting that’s fully open to the public because they don’t know what’s going to happen next.

The Facebook Papers: What you need to know about the trove of insider documents