This photo from Oct. 16, 2021, shows an entrance to the the dormant landmark Tree of Life synagogue in Pittsburgh's Squirrel Hill neighborhood where 11 people were killed in America's deadliest antisemitic attack on Oct. 27, 2018. 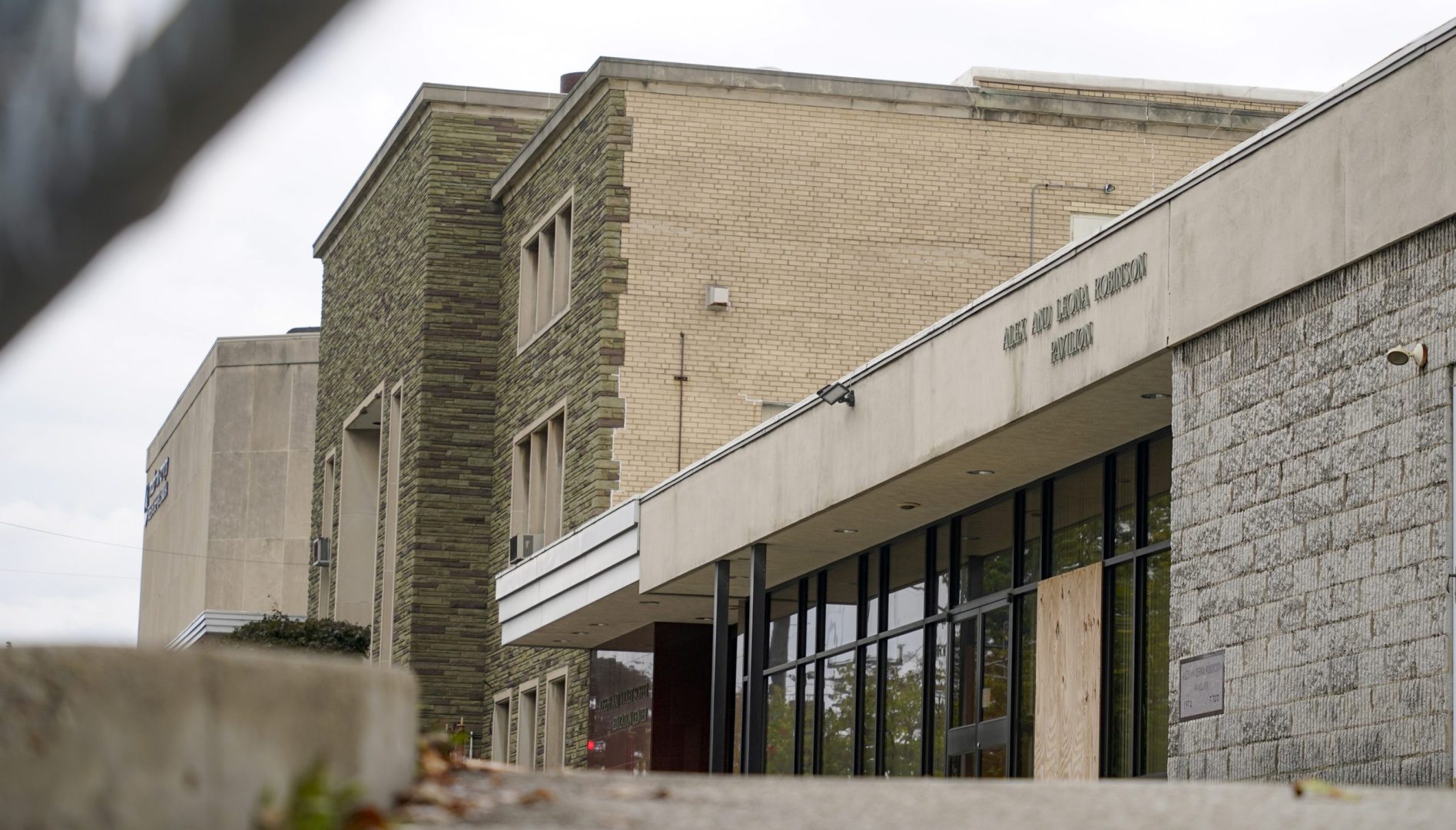 This photo from Oct. 16, 2021, shows an entrance to the the dormant landmark Tree of Life synagogue in Pittsburgh's Squirrel Hill neighborhood where 11 people were killed in America's deadliest antisemitic attack on Oct. 27, 2018.

(Harrisburg) — As the three-year mark since the massacre at the Tree of Life synagogue approaches, survivors are planning now-familiar annual rituals of remembrance, the criminal case involving the suspect plods on, and the site is in line for restoration.

The landmark synagogue in Pittsburgh’s leafy Squirrel Hill neighborhood remains dormant, but a renowned architect is among those working to transform the site where 11 people were killed in America’s deadliest antisemitic attack.

No trial date is in sight for the suspect, Robert G. Bowers. Nor is there any indication the U.S. Justice Department is heeding the calls of some members of the targeted congregations to avert a trial by dropping its quest for a death penalty and accepting a guilty plea accompanied by a life sentence.

In the coming days, members of the three congregations whose Sabbath services were underway during the Oct. 27, 2018, attack will join with supporters to pay quiet tribute, gathering for community-service projects and studying the Torah.

And on Wednesday afternoon, three years to the day since the shooting, they will assemble outdoors for a memorial service at Schenley Park, among 11 trees planted there to remember the slain.

“People are having a really difficult time in this COVID era,” said Maggie Feinstein, director of the 10.27 Healing Partnership, formed to help those affected by the synagogue shooting and hate crimes. The goal this year was to “come together safely. It’s been a long road of not being able to do that.”

Bowers’ lawyers and federal prosecutors were in a Pittsburgh courtroom this month to argue whether incriminating statements he made at the scene can be used against him.

Some members of the Tree of Life, Dor Hadash and New Light congregations say their grief has been compounded by the coronavirus pandemic because it further isolated them from one another and from in-person worship. 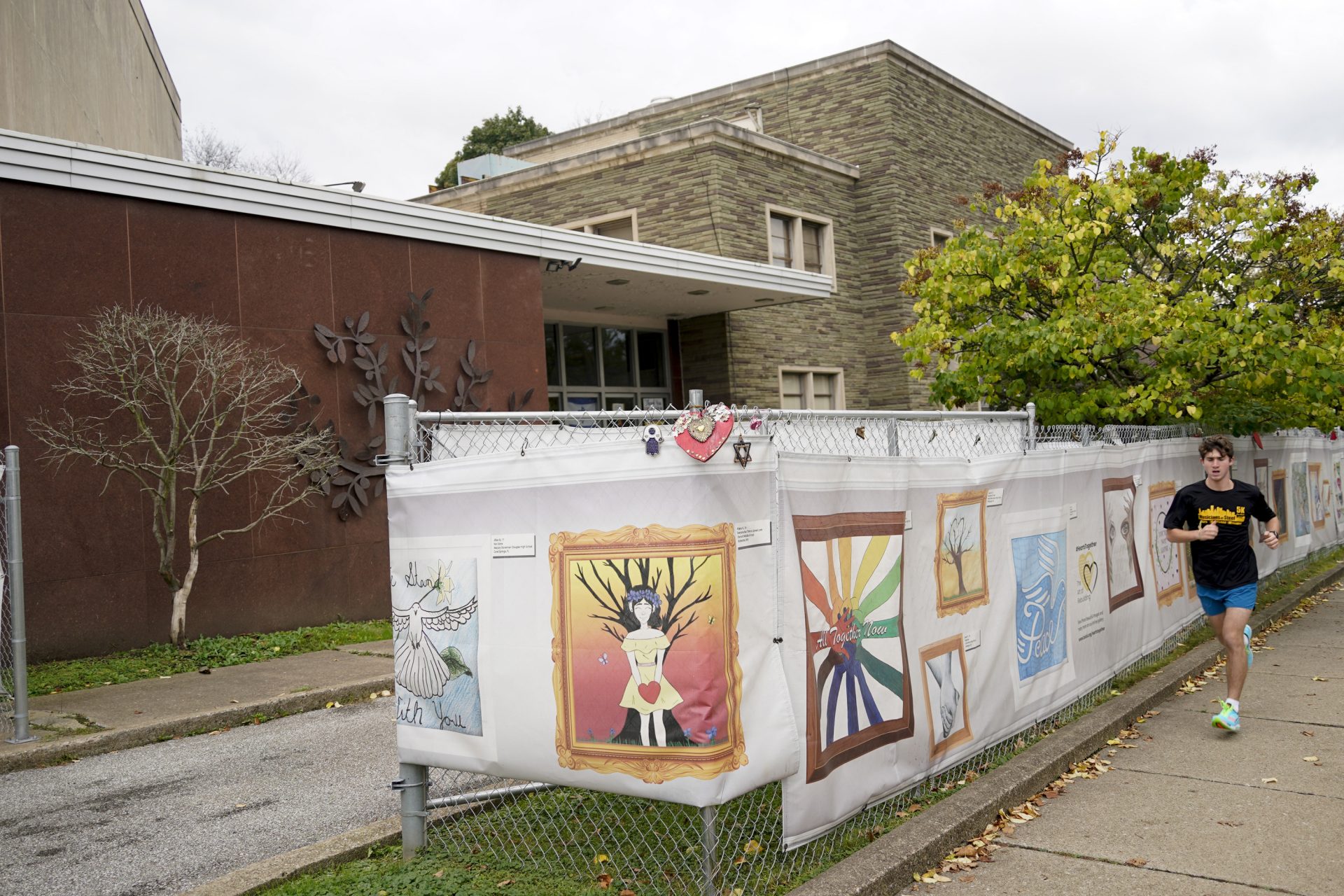 This photo from Oct. 16, 2021, shows the dormant landmark Tree of Life synagogue as a man jogs past the fencing with artwork submitted by Pittsburgh area school students in Pittsburgh’s Squirrel Hill neighborhood. Renowned architect Daniel Libeskind is among those working to transform the site to share space with the Holocaust Center of Pittsburgh.

Rabbi Jeffrey Myers of Tree of Life, who survived the attack, said the dual traumas have left congregants at various stages of recovery.

“There are some who say they’re healed,” he said. “If that’s the case, I say thank God. I can only say for myself, I will always be healing.”

The pandemic has also caused delays and logistical challenges in the federal capital murder case against Bowers, a former truck driver whose statements that day and trail of online posts suggest he was consumed by hatred for Jewish people when, authorities say, he launched the attack.

Bowers, 49, has avoided public statements from behind bars as his team of attorneys has fought to prevent him from being executed, even offering to have him plead guilty in return for a life sentence.

U.S. District Judge Donetta Ambrose has sealed about 100 of the roughly 600 docket entries in the case, restricting how much the public can know about the proceedings. The acting U.S. attorney in Pittsburgh, Stephen R. Kaufman, declined to comment for this article, and Bowers’ legal team did not respond to messages. 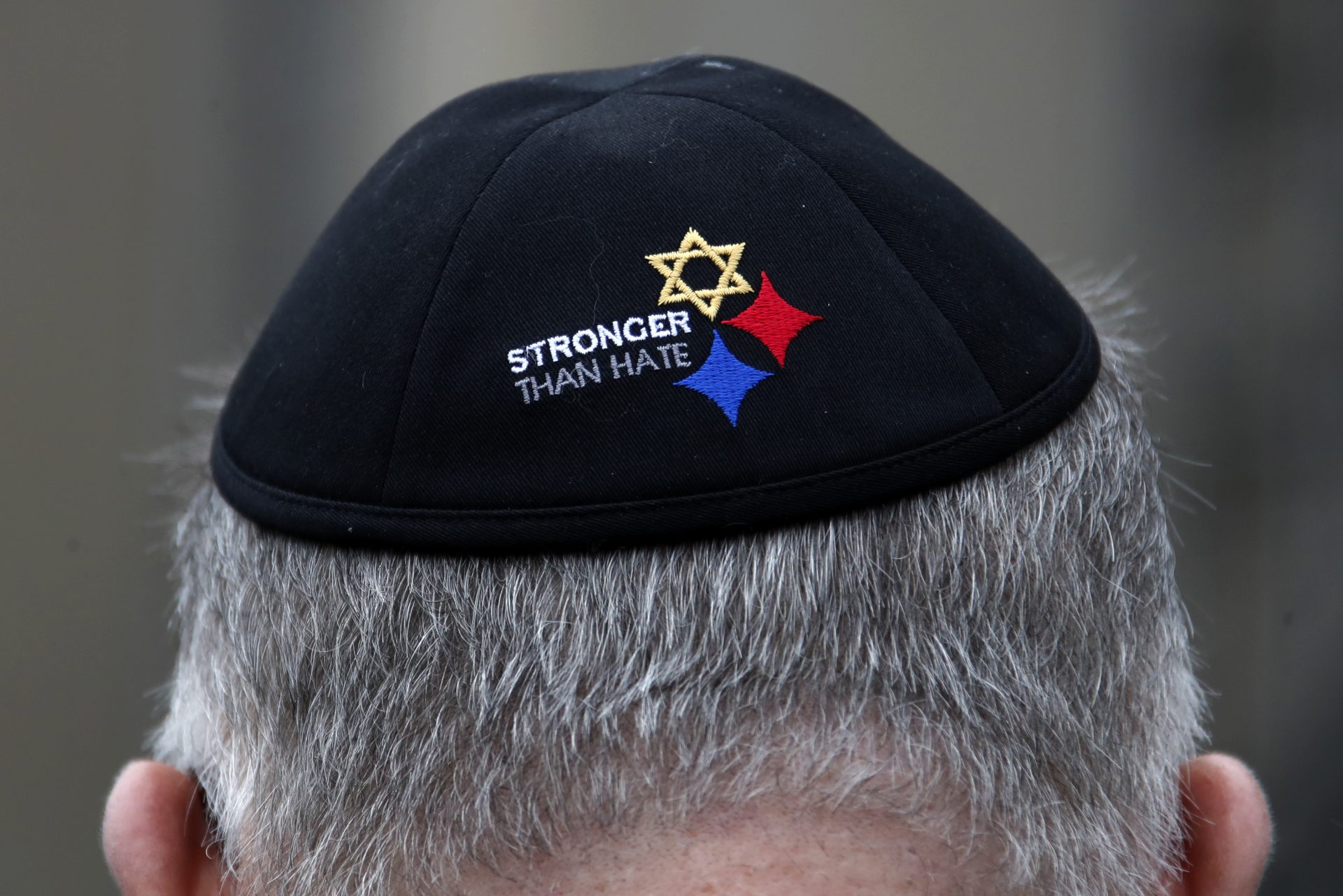 Bowers, armed with an assault-style rifle and three handguns, is accused of shooting 18 people and trading gunfire with officers, getting shot three times before he was taken into police custody. His social media history included posts about a false conspiracy theory that the Holocaust was a hoax and expressed contempt for a nonprofit Jewish group that helps refugees.

In 2019, Bowers’ lawyers told Ambrose “this case would already be over — and interests in a speedy resolution vindicated — had the government accepted the defendant’s offer to plead guilty as charged and be sentenced to life in prison without the possibility of release.”

Under then-President Donald Trump, the Justice Department pursued the killings as a death penalty case. But in July, Attorney General Merrick Garland announced a moratorium on federal executions while his agency reviews policies and procedures, adding to the uncertainty. Prosecutors continue to treat it as a capital case, but it’s unclear what would happen to Bowers if he is convicted.

Over the past two years, the defense and prosecutors have battled over evidence, search warrants and court procedures, as well as the effect of the pandemic on Bowers’ right to a fair trial. The defense team has insisted on safe conditions and expressed concern about the risks of travel, while the U.S. attorney’s office has complained about what they deem delay tactics.

Dave Freed, a former U.S. attorney in Harrisburg, called three years an unusually long period between arrest and trial for any criminal case, but said the intense public interest in the synagogue shooting and the potential death penalty both put added pressure on lawyers to get it right.

“I think you have to add COVID to mix — I’m sure it’s contributed,” said Freed, who did not have a role in the Tree of Life case when he worked for the Justice Department. 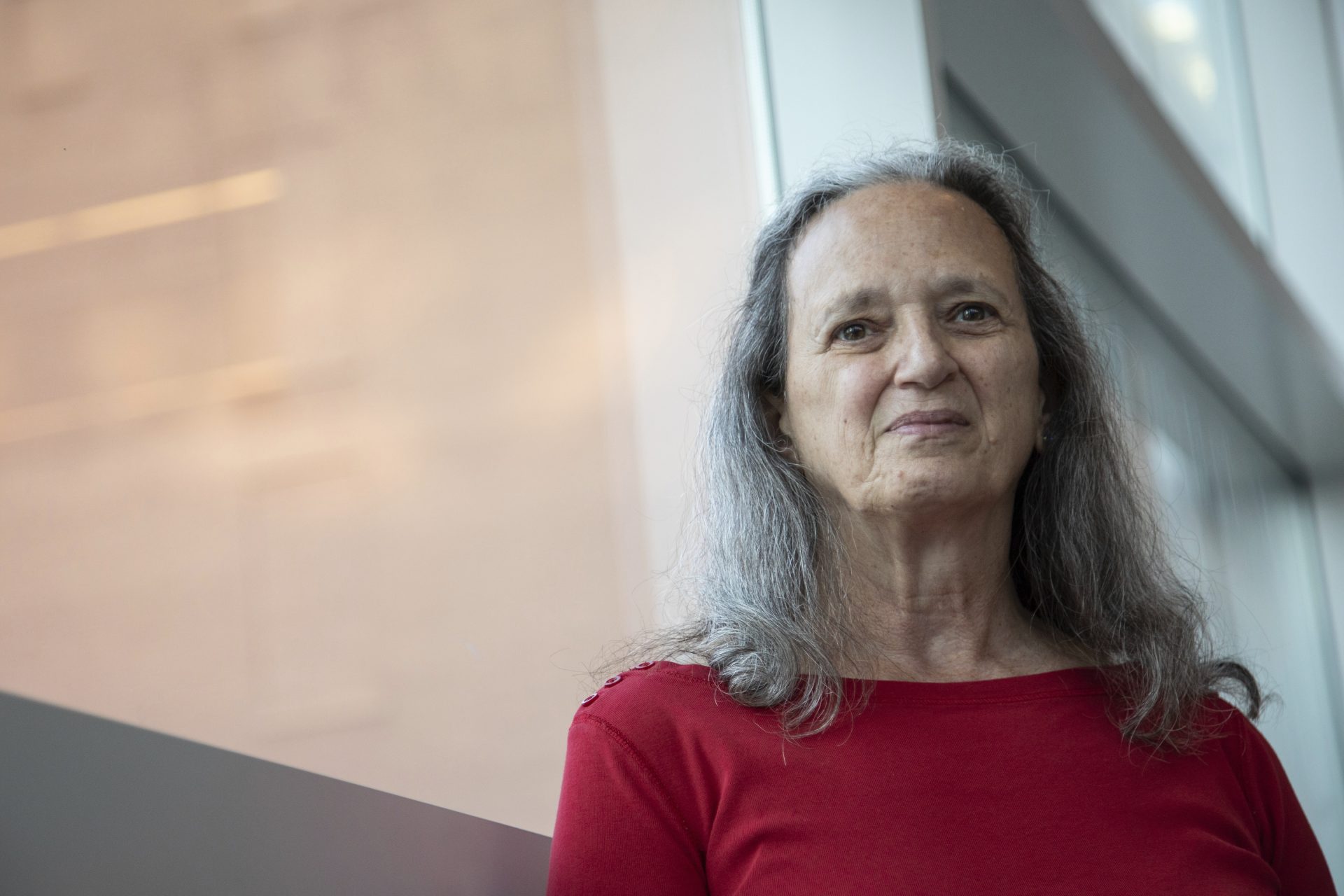 In this Monday, Oct. 18, 2021 photo, Carol Black, a survivor of the Oct. 27, 2018, mass shooting at the Tree of Life synagogue, poses for a portrait at the Eradicate Hate Global Summit in Pittsburgh. Black’s brother, Richard Gottfried, was killed along with 10 other people in the attack.

Some members of the three congregations want the Justice Department to take the deal that would spare Bowers’ life.

Dor Hadash, as a congregation, has urged Garland to abandon pursuit of the death penalty. Individual members of New Light also are opposed to a potential sentence of death.

Author Beth Kissileff urged against the death penalty on religious grounds and because a plea would spare survivors the trauma of a trial. Her husband, New Light Rabbi Jonathan Perlman, survived the shooting.

“As angry as I am that the lives of our friends and congregants were brutally ended, it is God’s responsibility, not ours, to avenge their death,” she wrote in the Jewish news site, The Forward.

Kissileff said she is encouraged by President Joe Biden’s campaign pledge to support legislation eliminating the federal death penalty and to give states incentives to do the same. She is also encouraged by the moratorium imposed by Garland.

Survivors said that they understand that capital cases take a long time, and that the pandemic has made this one take longer, but they want to get it behind them.

“We would like to move on with our lives and we would like to get this over a done with,” said Carol Black, who lived through the attack by hiding in a storeroom. 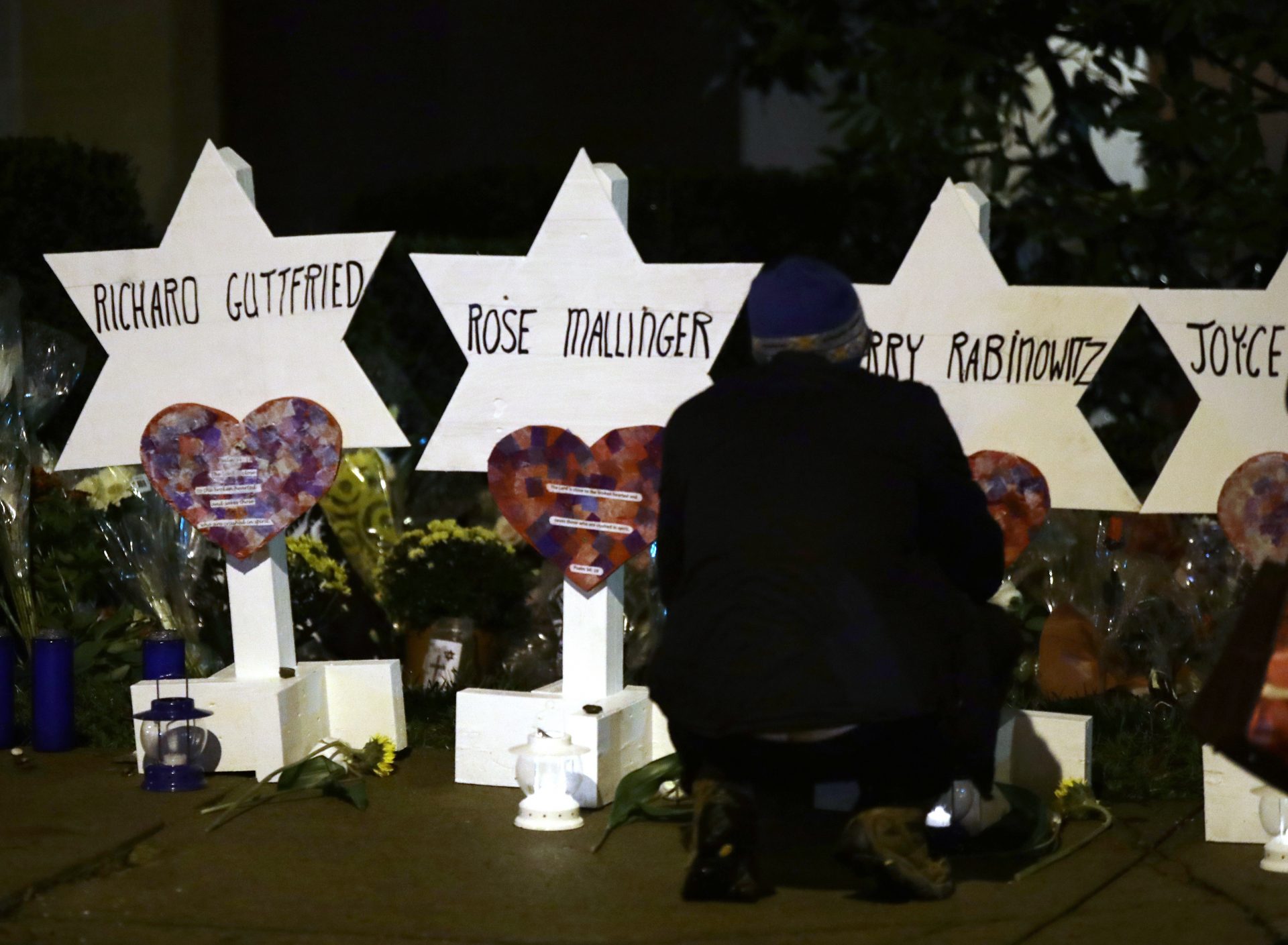 Stars of David with the names of those killed in a deadly shooting at the Tree of Life Synagogue stand in front of the synagogue in Pittsburgh, Sunday, Oct. 28, 2018.

Meanwhile, the Tree of Life Congregation has chosen architect Daniel Libeskind, the master planner for the reconstruction of New York’s World Trade Center, to redesign the sprawling synagogue complex, with plans to share space with the Holocaust Center of Pittsburgh. The goal is to create a solemn memorial as well as a place of regular activity.

“We’re all excited about the potential of what the premier architect of his generation could come up with at Tree of Life,” Myers said.

No. 7 Penn State, Illinois unsure of QBs ahead of matchup