In this May 21, 2001, file photo, Secretary of State Colin Powell talks with reporters during a news conference at the Department of State in Washington. Powell, who also served as chairman of the Joint Chiefs, has died from COVID-19 complications, his family said Monday, Oct. 18, 2021.

Colin Powell, the former secretary of state, dies at 84

He was for years one of the most widely admired Americans. 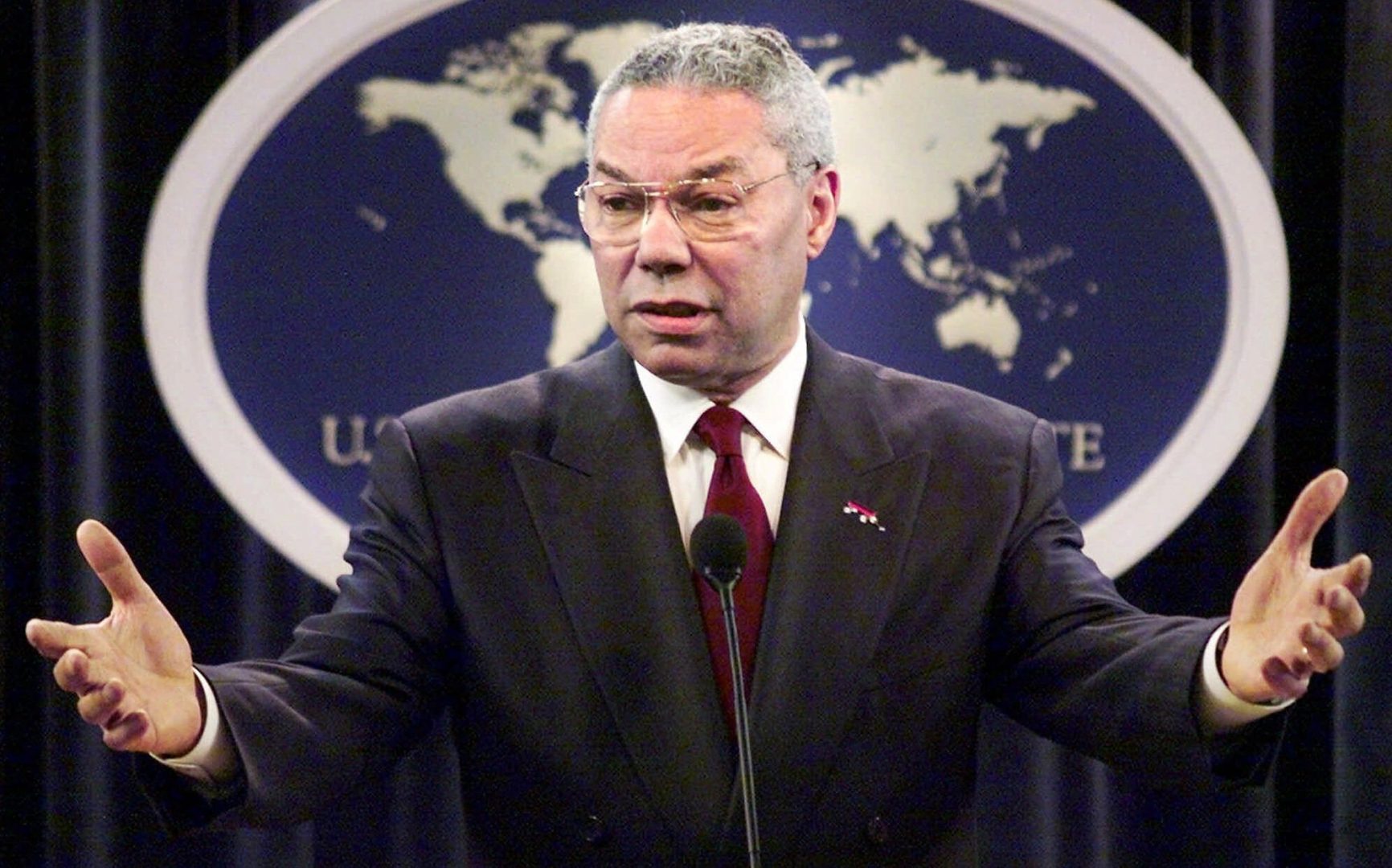 In this May 21, 2001, file photo, Secretary of State Colin Powell talks with reporters during a news conference at the Department of State in Washington. Powell, who also served as chairman of the Joint Chiefs, has died from COVID-19 complications, his family said Monday, Oct. 18, 2021.

(Washington) — Colin Powell, who served as secretary of state during the presidency of George W. Bush and led the first Gulf War as chairman of the Joint Chiefs, has died at age 84 of complications from COVID-19, his family confirmed.

Powell, the first African American to serve in both of those senior posts, died Monday morning. They said that “he was fully vaccinated.” His longtime aide, Peggy Cifrino, told The New York Times he had been treated in recent years for multiple myeloma, a blood cancer that can suppress the body’s immune system.

“We want to thank the medical staff at Walter Reed National Medical Center for their caring treatment,” the family said in a Facebook post. “We have lost a remarkable and loving husband, father, grandfather and a great American.”

It is unclear what the status of Powell’s multiple myeloma and his immune system was at the time of his death — or whether the cancer could have made him vulnerable to COVID-19 despite vaccination. Studies have shown patients with multiple myeloma are at higher risk for severe COVID-19.

Powell, the son of Jamaican immigrants, grew up in a working class family in Harlem. In the Army, he found a culture where a Black man could find his own path — where race, background and income level didn’t define you, he told NPR in 2012.

“People have asked me, ‘What would you have done if you hadn’t gone into the Army?’ I’d say I’d probably be a bus driver, I don’t know,” Powell said.

As a young Army officer, he served as an advisor in South Vietnam in the early 1960s. During that first tour, he believed the U.S. was in Southeast Asia “to save the world from communism,” he told C-SPAN in 1995.

But after a second tour in 1968, when the U.S. was at the height of its military involvement in Vietnam, he had lost his early optimism.

“We weren’t sure how we were going to get out of this war and we weren’t sure that we were prepared to make the investment that would be required to either win or get out with honor,” he said. 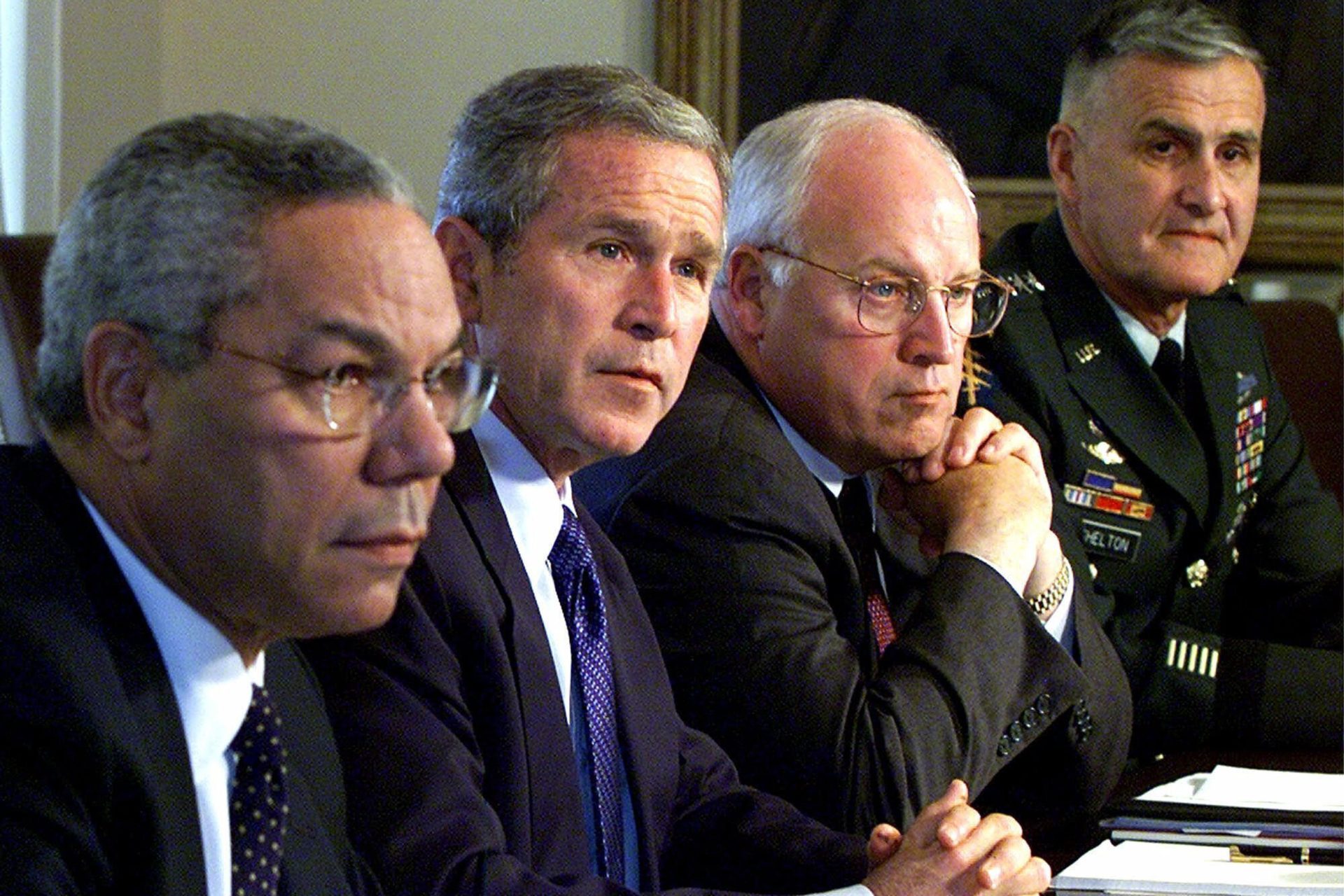 In this Wednesday, Sept. 12, 2001 file photo, from left, Secretary of State Colin Powell, President George W. Bush, Vice President Dick Cheney and Chairman of the Joint Chiefs of Staff Gen. Henry Shelton attend a meeting with the National Security Council in the Cabinet Room of the White House.

He would remember the lessons of Vietnam as he rose through the ranks, eventually becoming chairman of the joint chiefs of staff under then-President George H.W. Bush.

Powell came into the public consciousness during the first Gulf war when he advocated for overwhelming military force against Saddam Hussein’s Iraqi army, which had invaded Kuwait.

He was for years one of the most widely admired Americans. After retiring from the Army, he wrote a memoir, but was later tapped by President George W. Bush to serve as secretary of state. Bush described Powell as a “tower of strength and common sense.”

“When you find somebody like that, you have to hang on to them,” Bush said.

But Powell’s defense of the 2003 invasion of Iraq and his presentation at the United Nations of evidence of weapons of mass destruction that turned out not to exist – drew widespread criticism and put a blemish on his reputation.

“It wasn’t just me making the case; everybody was making the case,” he told NPR’s Steve Inskeep in an interview in 2011. “Even though my presentation, in many ways, was flawed — there was a lot of correct analysis in that presentation — it was based on a national intelligence estimate that the Congress had asked for and the CIA had provided, which is even more categorical than my subsequent presentation as to the existence of weapons of mass destruction.”

He grew disenchanted with the GOP under Donald Trump

Although moderate by today’s standards, Powell was nearly a lifelong Republican, having served two GOP presidents. But he said he would not vote for Donald Trump and later called out the 45th president for his lying and authoritarian tendencies.

“We have a Constitution. We have to follow that Constitution. And the president’s drifted away from it,” Powell said in 2020 after Trump threatened to use military force against Black Lives Matter protesters.

During the 2020 campaign, Powell said he would vote for Joe Biden, but it wasn’t until the Jan. 6 insurrection at the U.S. Capitol that the former secretary of state finally severed ties with the GOP.

“I can no longer call myself a fellow Republican,” he told CNN’s Fareed Zakaria. “I’m not a fellow of anything right now. I’m just a citizen who has voted Republican, voted Democrat throughout my entire career.”

“Right now, I’m just watching my country, and not concerned about parties,” he said.