Pittsburgh Steelers wide receiver JuJu Smith-Schuster (19) is helped off the field after being injured during the first half of an NFL football game against the Denver Broncos in Pittsburgh, Sunday, Oct. 10, 2021.

“We’re not trying to replace Juju. We’re just trying to provide additional opportunity for those that get expanded roles.”

(Pittsburgh) —  JuJu Smith-Schuster’s combination of tenacity and almost theatrical joy endeared the wide receiver to the Pittsburgh Steelers’ coaching staff since the moment he arrived in 2017 as the youngest player in the NFL.

Now, the Steelers must find a way to replace both. Smith-Schuster’s season is over.

Head coach Mike Tomlin said Tuesday the 24-year-old wideout is facing surgery on Wednesday and a trip to injured reserve after severely injuring his right shoulder in last week’s 27-19 win over Denver.

Smith-Schuster received the ball from quarterback Ben Roethlisberger on an end-around in the second quarter and lowered his shoulder while preparing for a collision with safety Kareem Jackson. The play was typical of Smith-Schuster’s relentlessly physical approach to his position. He slouched to the turf, however, after the 3-yard gain, and needed to be helped off the field before heading to the hospital for further evaluation.

Smith-Schuster felt well enough on Monday night to host an event organized by his eponymous foundation with his right arm in a sling. While he’s expected to make a full recovery, it won’t be in time to help the Steelers (2-3) as they try to climb out of an early-season hole.

The loss is a setback for both Pittsburgh and Smith-Schuster, who opted to return to the Steelers on a one-year deal last spring rather than leave in free agency.

Smith-Schuster’s numbers this season were modest — 15 receptions for 129 yards — even as he continued to burnish his reputation as one of the league’s toughest receivers for his willingness to go over the middle, particularly on third downs. 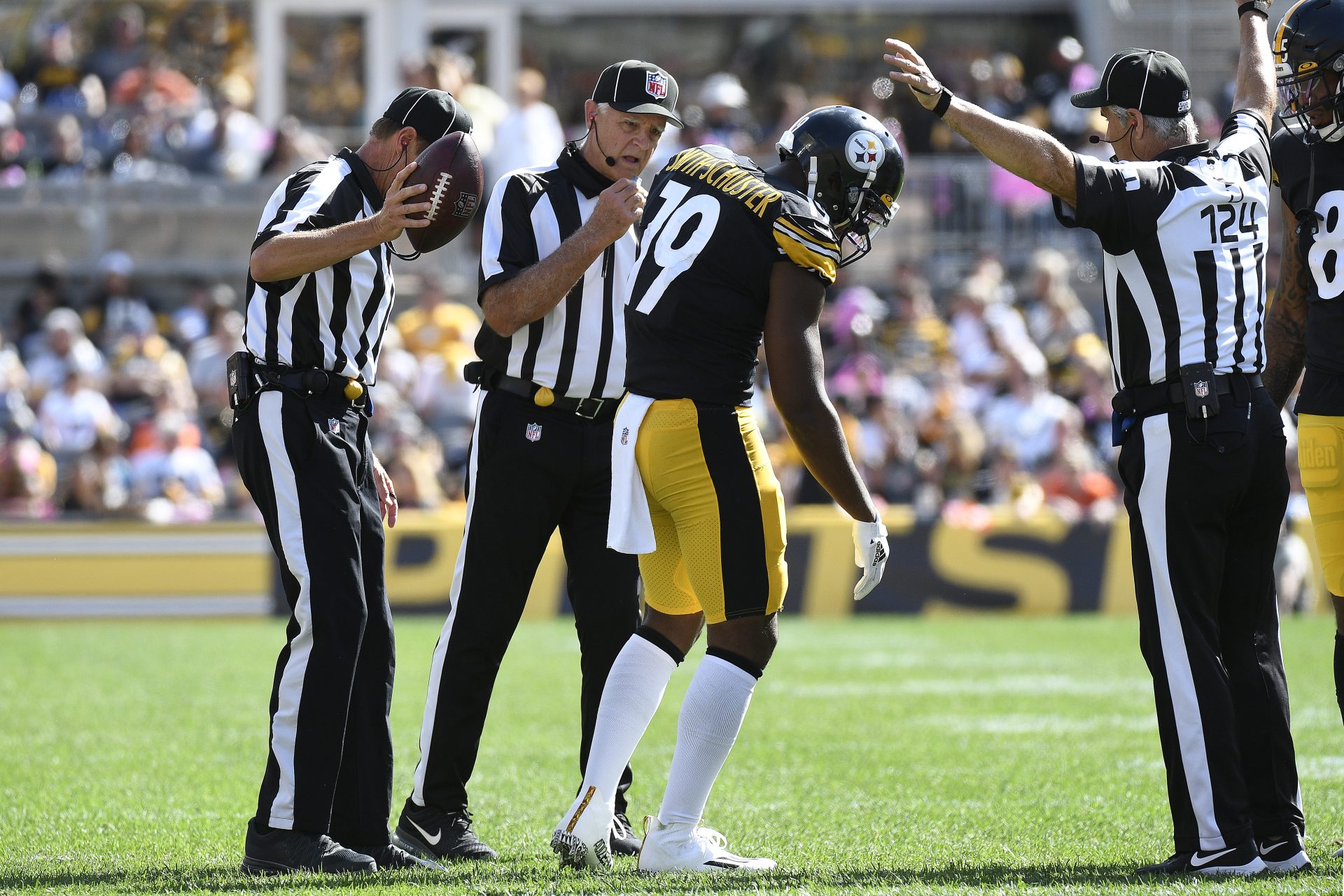 Pittsburgh Steelers wide receiver JuJu Smith-Schuster (19) gets up after being injured on a play during the first half of an NFL football game against the Denver Broncos in Pittsburgh, Sunday, Oct. 10, 2021.

Tomlin acknowledged his “heart aches” for Smith-Schuster. He said the team will rely on several players to provide the myriad contributions in the run and pass games that Smith-Schuster provided.

“We’re not trying to replace Juju,” Tomlin said. “We’re just trying to provide additional opportunity for those that get expanded roles.”

That list will likely include James Washington, Cody White and Ray-Ray McLoud. Washington missed the win over Denver with a hamstring injury but is by far the most experienced of the group. He also is at an interesting point in his career

A second-round draft pick in 2018, Washington has shown flashes but has also struggled to find consistent playing time. He reportedly asked for a trade during training camp — something Tomlin declined to acknowledge Tuesday — and now finds a chance to prove himself with his own trip to the free-agent market looming next March.

While Tomlin said he hasn’t spoken to Washington about what potentially lies ahead starting this Sunday night against Seattle (2-3), he stressed the team has no concerns about Washington’s attitude.

“James is a professional and a quality dude and teammate,” Tomlin said. “He’s always ready. He is always working. He’s low to no maintenance. I just got a lot of respect for him as a player and as a man.”

Washington isn’t the only player who figures to see an increased workload. Diontae Johnson had already become one of Roethlisberger’s most trusted targets and now likely becomes even more important, particularly on possession downs.

“He’s no longer a rookie,” Tomlin said of Johnson. “He’s been in some circumstances and situations. He’s understanding the game better. I think it’s allowing him to play faster. He’s finding his rhythm as a pro.”

The Steelers hope they found their rhythm as an offense against the Broncos. Rookie running back Najee Harris ran for a career-best 122 yards as Pittsburgh showed the balance it has spent most of the last three seasons desperately searching for to take a little bit off the 39-year-old Roethlisberger’s plate.

Tomlin stressed he’s not ready to say his team, still in last place in the AFC North basically a third through the season, has figured things out. Still, there were tangible and necessary signs of progress following a three-game losing streak.

“We’ve been working hard at developing cohesion and offensive front, and it manifested itself in terms of an efficient run game,” he said. “We saw signs of that in Green Bay. I thought we took another step this past Sunday.”

The line could also see some reinforcements this week. Tackle Zach Banner is nearing a return after opening the season on injured reserve following a setback in his recovery from a torn right ACL that cost him almost all of the 2020 season.

While Tomlin likes the strides the line made with Banner out, that doesn’t mean he’s going to willingly leave Banner out of the mix whenever he’s available.

“… I’m not going to make it a negative to have more than five capable men who are ready and capable of playing,” Tomlin said. “Winning football for us is not a negative. It’s just not. We’ll manage (the division of labor). It’ll be a pleasure to manage, to be quite honest with you. I’d rather have six (capable linemen) than four.”