In this July 28, 2021 file photo Pennsylvania Attorney General Josh Shapiro, center, and President Joe Biden talk with people at the Lehigh Valley operations facility for Mack Trucks in Macungie, Pa. The high-profile attorney general will formally announce his candidacy for governor of Pennsylvania on Wednesday, Oct. 13, 2021, entering the 2022 race.

For Josh Shapiro, the only Dem candidate for Pa. governor, it’s all going according to plan

Shapiro’s lofty political ambitions have been well-known and discussed throughout his nearly two decades in Pa. politics.

It’s not a surprise. Shapiro’s lofty political ambitions have been well-known and discussed throughout his nearly two decades in Pa. politics. But his bid remains unusual. Unlike the crowded 2022 field for U.S. Senate — and for the Republican nomination for governor — Shapiro is in a lane by himself. No other Democrat with political experience or the ability to put together a formidable campaign has expressed plans to challenge him.

Nicholas isn’t working for any of the GOP gubernatorial candidates — there are currently around 10 — and acknowledges that Shapiro’s freedom from a hard primary coupled with his fundraising power, will put him in an enviable position come the general election.

“If some enterprising Democrat out there wants to run, you know, give me a call,” Nicholas said.

There’s a good reason many of Pa’s established or enterprising Democrats have focused their 2022 efforts on the U.S. Senate instead of governor. Shapiro may not be the only candidate who could win a primary, but for lots of powerful people in the party, he’s the obvious choice.

As a young state representative, he helped broker a power-sharing agreement that maintained Democrats’ influence in Harrisburg even as they lost seats. His election as Montgomery County Commissioner delivered control of the longtime GOP stronghold for the first time in history, and his reputation as a moderate dealmaker won him friends on both sides of the aisle. As Attorney General, he got national attention for a sweeping report detailing sexual abuse in Pennsylvania’s Catholic churches, and for his many lawsuits against President Donald Trump’s administration. 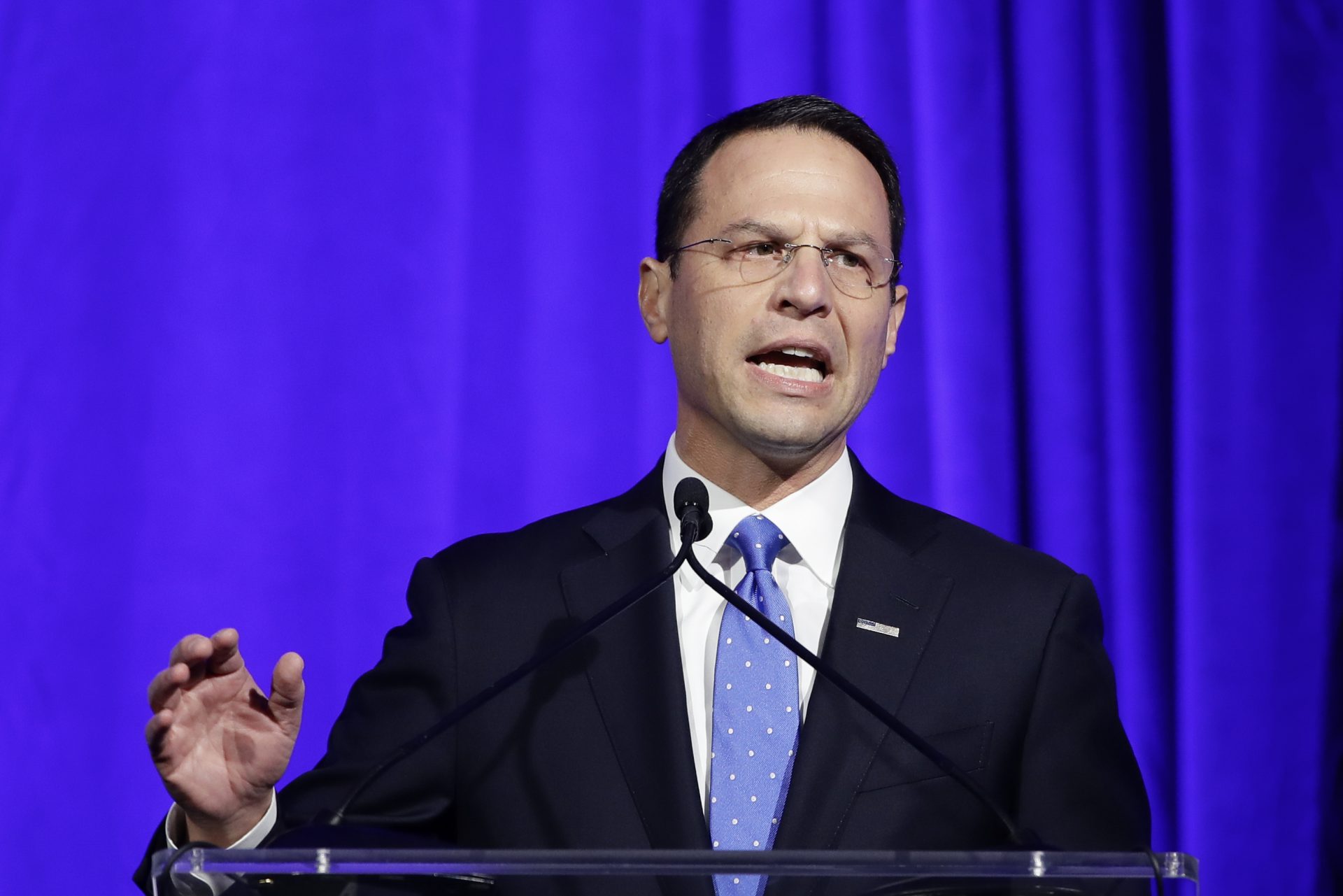 “He’s the consensus without even having to have a conversation,” said Marcel Groen, former chair of the Pennsylvania Democratic Party and a longtime fixture in the Democratic politics of Montgomery County, where Shapiro grew up.

Groen isn’t a neutral observer. He’s known Shapiro, 48, since the attorney general was around five years old and Shapiro’s father was involved in the same synagogue. But Groen said he really got to know Shapiro once he got into politics.

Shapiro’s first big political job came in the late 90s, when he became chief of staff — the youngest chief of staff on Capitol Hill — to then-U.S. Rep. Joe Hoeffel, a Democrat.

In 2005, Shapiro was elected to the state legislature, becoming the first Democrat to hold the seat since 1985, when Hoeffel himself had left it. In 2011, Shapiro won a seat as Montgomery County Commissioner and became chair of the three-member board. It was the first time in history Democrats held a majority in Montco government.

Iin 2016, with then-Attorney General Kathleen Kane under indictment and the office in disarray, Shapiro won that statewide position on a promise to restore order.

Perhaps the most significant action of his career came in 2018, during his time as AG, when he presided over the release of a landmark grand jury report on decades of sexual abuse of children in Catholic dioceses across Pennsylvania.

Throughout Trump’s term, Shapiro added his name to dozens of joint lawsuits with other Democratic attorneys general. He sued over Trump’s family border separation policy, the administration’s policies on contraception, and the election-time changes to post office operations. During the 2020 election, Shapiro raised his national profile as a frequent cable news commentator and Trump critic.

Shapiro has become known as a political pragmatist, both by his admirers and his detractors. He’s viewed as someone driven less by ideology than by a desire for unanimity.

“It’s not an economic perspective, necessarily,” said Groen, the former Pa. Democratic Party chair, of Shapiro’s moderate outlook. On issues like taxation, for instance, he sees in Shapiro a desire to find the most painless solution for everyone, versus the most progressive solution.

It’s a vision for the Democratic party that resonates with Groen, but one that has begun to feel increasingly like a throwback in Pennsylvania. Some high-profile Democrats, like Lt. Gov. John Fetterman, who is running for U.S. Senate, have argued the real way to win Pennsylvania is to energize people across the political spectrum with progressive ideas that poll well, like marijuana legalization, healthcare for all, and higher wages.

Groen himself isn’t in power anymore. He resigned from his chairmanship of the state party amid accusations that he’d ignored sexual harassment allegations.

Pennsylvania Attorney General Josh Shapiro delivers remarks to a crowd of sexual abuse survivors and their supporters during a rally at the state Capitol building on April 19, 2021.

Some of Shapiro’s most significant clashes in recent years have been with more progressive Democrats. Fetterman has been an avid proponent of more frequent pardons from the state board that recommends prisoners for release. Fellow board member Shapiro, however, has more often cast votes recommending against them, often expressing concerns about public safety.

Krasner has a more aggressively anti-mass-incarceration approach to criminal justice than Shapiro, and the two tangled publicly over a bill that gave Shapiro more control over prosecuting Philly gun crimes.

At one point, Krasner’s office issued a statement saying the DA “deserves a direct explanation from Attorney General Shapiro of how this targeted attack on his local authority came to be authored,,” Shapiro ultimately distanced himself from the bill and tried to smooth the conflict over, claiming he “didn’t seek this law” and “didn’t advocate for it.”

Krasner also sued the attorney general for settling with opioid distributors and manufacturers. His office declined to comment on Shapiro’s gubernatorial bid.

Others have been turned off by what they view as Shapiro’s hard-edged political ambition. Hoeffel, Shapiro’s onetime boss, had a falling out with him after Groen and the Montco Democrats refused to endorse Hoeffel for another term as county commissioner, siding instead with a slate that included Shapiro and Leslie Richards.

Hoeffel later told the Inquirer that “you don’t want to turn your back on [Shapiro],” because “loyalty is not his strong suit.” Reached for comment about the impending formal start to Shapiro’s gubernatorial campaign, the former U.S. rep had little to add.

“I believe Josh has done a very good job as AG,” Hoeffel said in a text message. “Let’s just leave it at that.”

GOP colleague: I won’t vote for him, but there’s nobody better

Shapiro’s style has won him some unlikely admirers. One of them is Bruce Castor, who served as Montgomery County Commissioner alongside Shapiro for four years. Castor is better known as one of the lead attorneys who defended Donald Trump during his second impeachment trial.

Castor says he doesn’t plan to vote for Shapiro for governor — “No, I’m a Republican” — but he’s still a fan.

“There is no one that I’ve met in government that I thought was better at administering a government agency than Josh is,” Castor said. “I don’t agree with a lot of the positions he takes, [but] for every abortion question or Second Amendment question or civil rights question, there’s a thousand potholes, and ‘where does the road go,’ and ‘who gets appointed to that important job,’ … that’s where Josh excels.”

Castor began working with Shapiro after an unusual period for Montgomery County. On the previous board of commissioners, he had been largely kept in the cold by a power-sharing agreement between Hoeffel and the other Republican member, Jim Matthews. Public feuds were common.

On a board with Shapiro and another Democrat, Castor might have expected even less influence. But that wasn’t the case, he said. Shapiro, the chair of the commissioners, was too focused on consensus.

“I can’t remember anything, any issue, that he wasn’t willing to compromise on in order to get unanimity,” Castor said. “There were plenty of times where we just plain didn’t do anything if we didn’t all agree on it.”

That united front is in play once again as Pennsylvania’s entire Democratic establishment coalesces around Shapiro — which is highly unusual. Competitive primaries are common, particularly when there’s no incumbent.

In the last truly open gubernatorial election, the 2010  Democratic field had four major primary candidates. The Republican field had two, including Tom Corbett, who won. In the 2014 election that saw Corbett ousted, current Gov. Tom Wolf beat out three other high-profile contenders for the Democratic nod.

To Castor, it makes sense. He’s been watching Shapiro lay this groundwork since they were county commissioners.

“He’s been working at it for 10 years, to make sure that he made the friends he needed to make, and that he convinced rivals to seek other positions,” Castor said. “[Shapiro] got to where he is within the party because he planned it that way.”