Philadelphia Eagles linebacker Shaun Bradley celebrates after recovering a blocked punt against the Carolina Panthers during the second half of an NFL football game Sunday, Oct. 10, 2021, in Charlotte, N.C.

Thee Eagles didn't panic, relying on their defense and special teams until Jalen Hurts and the offense finally arrived.

(Charlotte, N.C.) — The Philadelphia Eagles believe in what they call the “Dawg Mentality,” and that motto typified their 21-18 come-from-behind win over the Carolina Panthers on Sunday.

The offense couldn’t move the ball and things were looking mighty bleak through most of the first three quarters.

But the Eagles didn’t panic, relying on their defense and special teams until Jalen Hurts and the offense finally arrived in battling back from a 12-point deficit to snap a three-game losing streak.

“When one unit is down, the other units have to bring it up,” said Eagles coach Nick Sirianni. “The defense I felt like was up the whole game. Right? They really did. They played an unbelievable game. Special teams was down a little bit early, but then they come back and make a play. Then the offense was down, but they gutted it out in the second half and then they make some plays.”

It was, as Sirianni said, the very definition of a team win.

“It’s what we talk about with ‘Dawg Mentality’ because the offense wasn’t going good for a long time of that game,” Sirianni said. “But when they needed to make plays at the end when it was still tight. They made the plays that we needed to make there. Every guy in there should be happy.”

With four minutes remaining and the Eagles trailing 18-13, Edwards came off a stunt at the line of scrimmage and raced in to block Joe Charlton’s punt. Shaun Bradley might have had a chance to scoop and score, but instead fell on the ball at the Carolina 27.

As Carolina linebacker Haason Reddick said, “it changed the momentum of the game.” 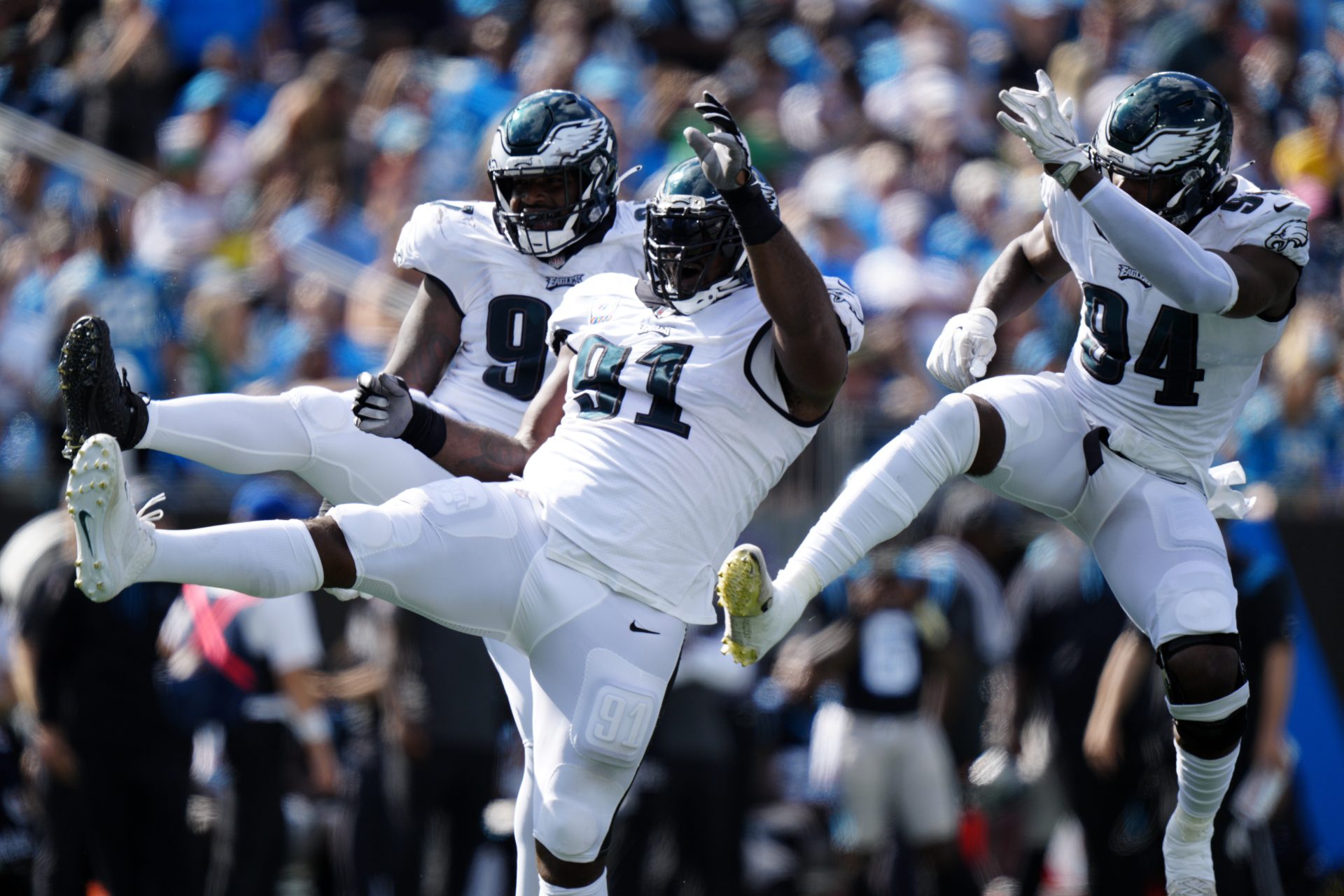 Philadelphia Eagles defensive tackle Fletcher Cox celebrates after a sack against the Carolina Panthers during the second half of an NFL football game Sunday, Oct. 10, 2021, in Charlotte, N.C.

Edwards said the Eagles were anticipating a certain look from the Panthers punt protection unit, and when they saw it they went for the block.

“They gave us kind of the same look in one of our earlier rushes and we kind of just switched a couple of things up and we were able to get home,” Edwards said.

Carolina’s defense didn’t respond well to the sudden change as Hurts found Dallas Goedert for a 20-yard completion on second down to set up a first-and-goal at the Carolina 6. Two plays later, Hurts faked a handoff and kept the ball on a zone-read option, essentially jogging into the end zone for the score and the Eagles first lead of the game.

From there, the defense put the final touches on the win as Steven Nelson intercepted Sam Darnold’s pass near midfield, allowing the Eagles to run out the clock. It was Philadelphia’s third sack of the game, following a day in which they had Darnold on the run.

“That guy (wide receiver Robby Anderson) had been lining up in that formation all day.,” Nelson said. “I just kind of read the play before it even happened and made the play.”

Edwards said there was no panic when the Eagles entered the locker room trailing 15-6.

“The biggest thing is guys hunkered down,” Edwards said.

“I always say never get too high or never get too low,” Hurts said. “Whether it’s good or it’s bad, you have the ‘Dawg Mentality’ and flush it off and leave it and move forward. It’s all about the ability to overcome.”

The Eagles’ losing skid may be over, but an even bigger challenge awaits on Thursday night when they host Tom Brady and the defending Super Bowl champion Tampa Bay Buccaneers (4-1).