Pittsburgh Steelers running back Najee Harris (22) celebrates with quarterback Ben Roethlisberger after scoring during the first half of an NFL football game against the Denver Broncos in Pittsburgh, Sunday, Oct. 10, 2021.

Riding an offensive balance nonexistent for most of the last two years, the Steelers held off Denver 27-19 on Sunday to snap a three-game losing streak.

(Pittsburgh) — Ben Roethlisberger and the Pittsburgh Steelers silenced the noise. At least for a week.

Funny how having something resembling a running game for the first time in a long time will do that.

Riding an offensive balance nonexistent for most of the last two years, the Steelers held off Denver 27-19 on Sunday to snap a three-game losing streak.

Rookie Najee Harris ran for a career-best 122 yards and a touchdown for Pittsburgh (2-3) before a cramping issue in his calves forced him to stand on the sideline while a late rally by Denver fell short.

The Broncos (3-2) trailed by 18 in the fourth quarter before a pair of Teddy Bridgewater touchdown passes brought them within striking distance. Bridgewater’s fourth-down heave to the end zone with 11 seconds left was intercepted by James Pierre, allowing the Steelers to exhale. For a minute anyway.

“Probably not,” he said. “But we won the game, and that’s all that matters.”

And won in a way they’re probably going to need to keep pace in the highly competitive AFC North. With H arris churning through holes that didn’t exist over the first four games, the Steelers didn’t have to rely exclusively on their 39-year-old quarterback to make something happen.

That was kind of the plan all along and got lost amid a difficult first month. The Steelers dropped three of four behind a retooled offensive line that at times looked overmatched. 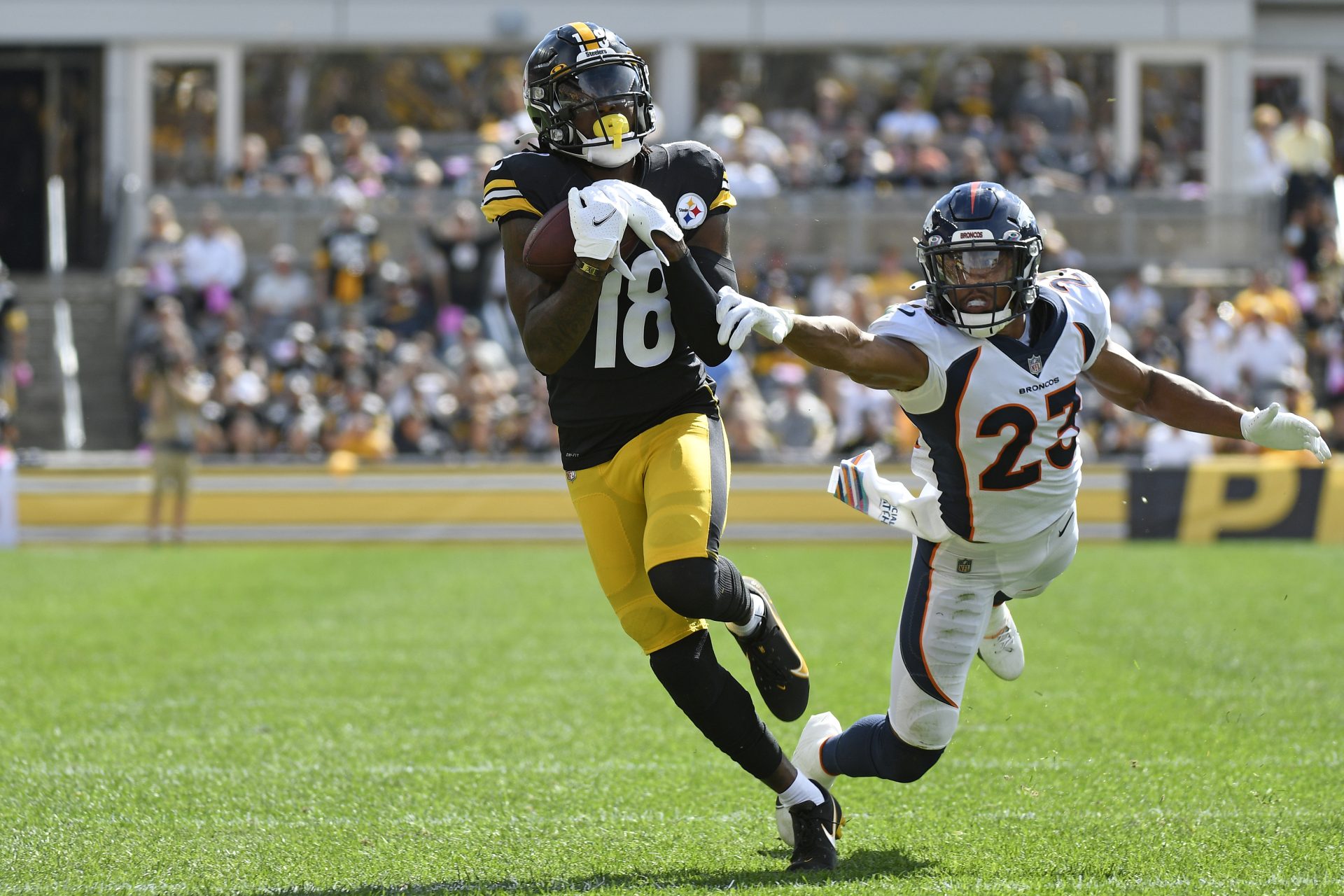 Pittsburgh Steelers wide receiver Diontae Johnson (18) hauls in a pass from quarterback Ben Roethlisberger with Denver Broncos cornerback Kyle Fuller (23) defending during the first half of an NFL football game against the Denver Broncos in Pittsburgh, Sunday, Oct. 10, 2021. Johnson took the ball in for a touchdown.

Not so much against the Broncos. The Steelers gave up one sack and kept Denver outside linebacker Von Miller in check while running the ball 35 times and passing just 25, the kind of ratio Roethlisberger is more than happy to live with.

Several times Roethlisberger lined up in the shotgun with the option to run or pass, saw coverage that indicated he should probably throw it and opted to hand it off to Harris anyway because the 22-year-old runner and the five linemen in front of him had it going.

“Why take it out of his hand when you’re grinding it, you’re getting it?” Roethlisberger said. “It was kind of fun to watch him excel and take over.”

Yet cramps forced out Harris in the middle of the fourth quarter. Bridgewater, who spent the bulk of the week in the NFL’s concussion protocol before returning to practice Friday, nearly drew the Broncos even.

Bridgewater completed 24 of 38 passes for 288 yards with a pair of scores: a 2-yard dart to Kendall Hinton and a 39-yard rainbow to Courtland Sutton with 5:46 to go that drew Denver within 24-19. Bridgwater then drove Denver to the Pittsburgh 3 in the final seconds before Pierre’s first career interception ended the threat.

“We can’t wait until the game is out of hand to have a sense of urgency,” Bridgewater said.

The loss made Denver’s perfect September look more like a mirage. The Broncos piled up wins against the Giants, Jaguars and Jets last month. Tested by Baltimore and Pittsburgh in back-to-back weeks, the Broncos came up short.

While Bridgewater lamented another slow start, Denver’s defense didn’t do much to help.

Three times the Broncos appeared to have their hands on an interception only to have the ball fall harmlessly to the turf. Running back Javonte Williams ripped off a 49-yard run in the second quarter only to spike the ball after getting tackled at the Pittsburgh 1. The act drew a delay-of-game penalty and the Broncos ended up with a field goal.

A pass-interference penalty on Kyle Fuller set up Harris’ 1-yard dive, and a rare “leverage” penalty on a Pittsburgh field-goal attempt instead gave the Steelers a first down. Three plays later, Roethlisberger connected with Chase Claypool to give the Steelers 24-6 lead, just enough to give them a bit of peace following a tumultuous stretch.

“We didn’t care if it was pretty (or) ugly,” Roethlisberger said. “We just wanted to win the game.”

Broncos: Cornerback Mike Ford (knee) left in the second half and did not return.

Steelers: Wide receiver JuJu Smith-Schuster went to the hospital with a shoulder injury sustained while getting tackled following a 3-yard gain on an end-around in the second quarter. … Inside linebacker Devin Bush left in the third quarter with an unspecified leg injury. … Harris departed late with the cramping issue.

Steelers: They host the Russell Wilson-less Seattle Seahawks (2-3) next Sunday night. The Seattle star QB is out after undergoing surgery on his right middle finger last Friday. Geno Smith is expected to start in Wilson’s place.