76ers get used to life at home without disgruntled Ben Simmons

The All-Star guard is dragged on social media, where he stayed silent during the game, and mocked along the coast in viral videos.

(Philadelphia) — The Florida man who corralled a loose alligator into a recycling bin described his thought process on the hunt for the reptile like this:

“I’m not going to be Ben Simmons. I’m gonna get me this basket,” Eugene Bozzi said in a TV interview.

Would you be surprised to learn the alligator wrangler was a Philadelphia native?

Without playing a game, Simmons is getting dunked on, from wrestlers to weathermen to Shaq, and there’s no respite from the insults, not as long as he refuses to play for the Philadelphia 76ers. The three-time All-Star guard on Thursday night skipped the Sixers’ preseason home opener — the official status update was “not with team” — and he’s now a pariah in Philly.

Simmons was out of sight, out of mind and out of the team pregame hype video, with no public hint of a resolution to the messy separation any time soon.

The Sixers have largely stopped talking about him, and really, who could add anything of substance that would live up to Joel Embiid’s open rebuke last week that the melodrama was “weird, disappointing, borderline kind of disrespectful to all the guys that are out here fighting for their lives”? The 25-year-old Australian, still with $147 million and four years left on his contract, these days is little more than a public punchline.

He’s dragged on social media, where he stayed silent during the game, and mocked along the coast in viral videos.

Take, for example, a rapping wrestler who had some choice words for a tag team waiting in the ring inside a packed Philly arena this week. Max Caster freestyled he’d “send the boys packing like their name’s Ben Simmons.” The diss triggered thousands of AEW fans to chant, well, “(Expletive) Ben Simmons!” 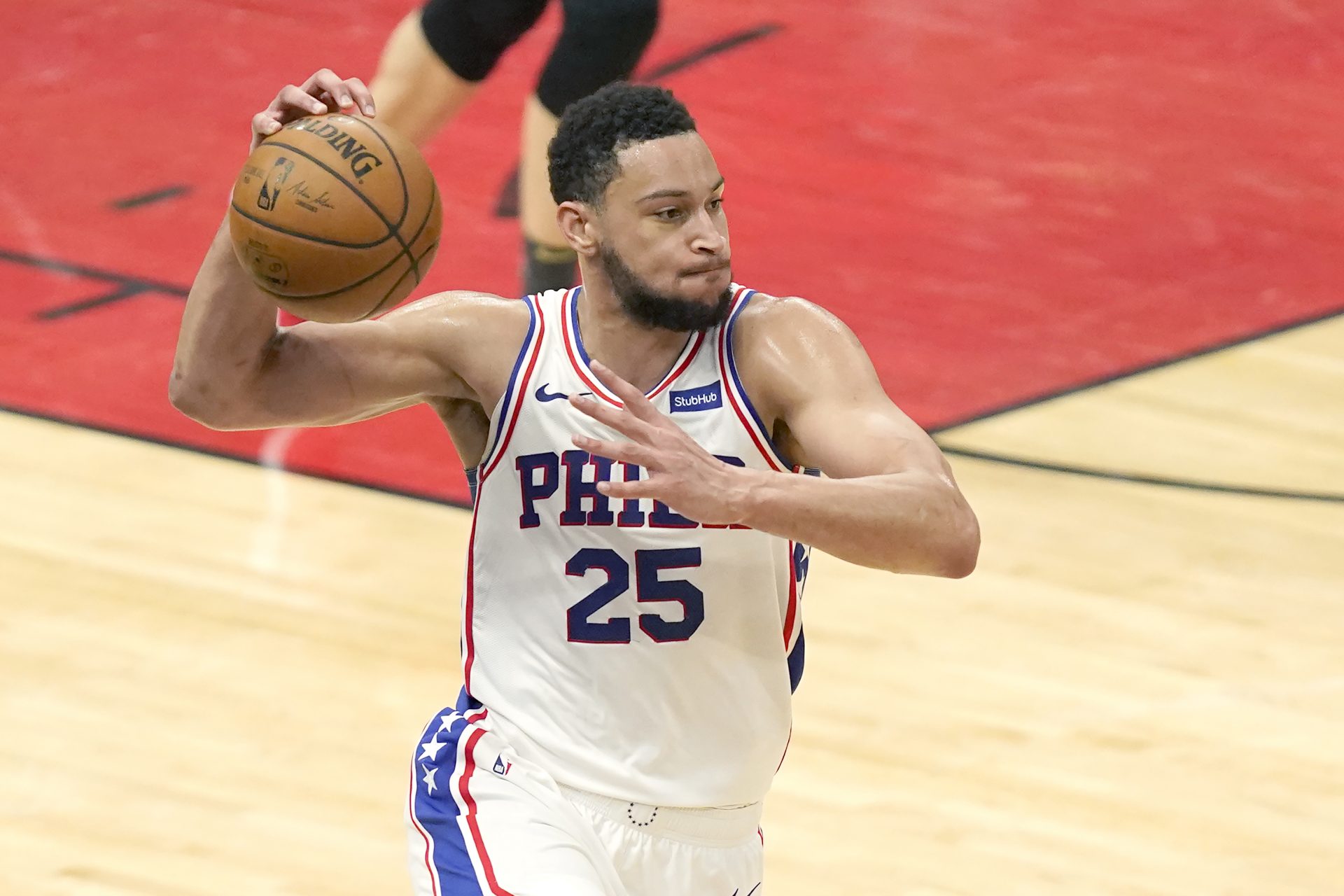 In this May 3, 2021, file photo, Philadelphia 76ers’ Ben Simmons looks to pass during the second half of an NBA basketball game against the Chicago Bulls in Chicago.

Yes, the most hated heel in the city this week — or this season — getting the one-syllable profanity treatment is a former No. 1 draft pick.

The Philadelphia meteorologist nicknamed “Hurricane” opened a recent forecast with the dig, “unlike Ben Simmons, we had to show up today.” Glenn Schwartz added, “we gave him every break, every encouragement.”

The forecast for reconciliation is cloudy.

Shake Milton started at point guard against Toronto after Ty Maxey ran the offense in the preseason opener. On the court, the only debate is who runs the show in Simmons’ place.

“I don’t know if this is a team that there’s a starting lineup,” coach Doc Rivers said. “It’s just going to be different guys, different nights. That’s just how we’re going to play.”

Trying to build off last season’s No. 1 seed in the Eastern Conference, the Sixers would likely have to land an elite guard in a package deal for Simmons to remain an NBA championship contender. Raptors coach Nick Nurse knows the feeling of adjusting on the fly after losing superstars, such as Kawhi Leonard and Kyle Lowry.

“He’s one of their main guys,” Nurse said. “Any team that loses them, feels the effect of that. We’ve lost some over the years, too. I think it takes time, one. Two, you usually feel the effect of that in the playoffs. Those guys that have been through those battles, they’re hard to find. And hard to replace, until you go through them.”

Simmons’ postseason play, though, was the fatal flaw that stoked the trade demand once he felt Rivers and his teammates didn’t have his back in the wake of a miserable series against Atlanta. Simmons took the fall — then wanted out. He hasn’t talked publicly since the summer trade demand, and tea leaf readers are making a mint trying to decipher clues into how the impasse will be resolved.

The holdout comes at a cost.

Simmons was hit with financial penalties with 25% of his salary already withheld and fines accruing for missed practices and games, numbers that could hit seven figures even before the Oct. 20 season opener.

He does have at least one defender: Philly native and comedian Kevin Hart went on the “All The Smoke” podcast and said the city and franchise needed to ease up on Simmons. 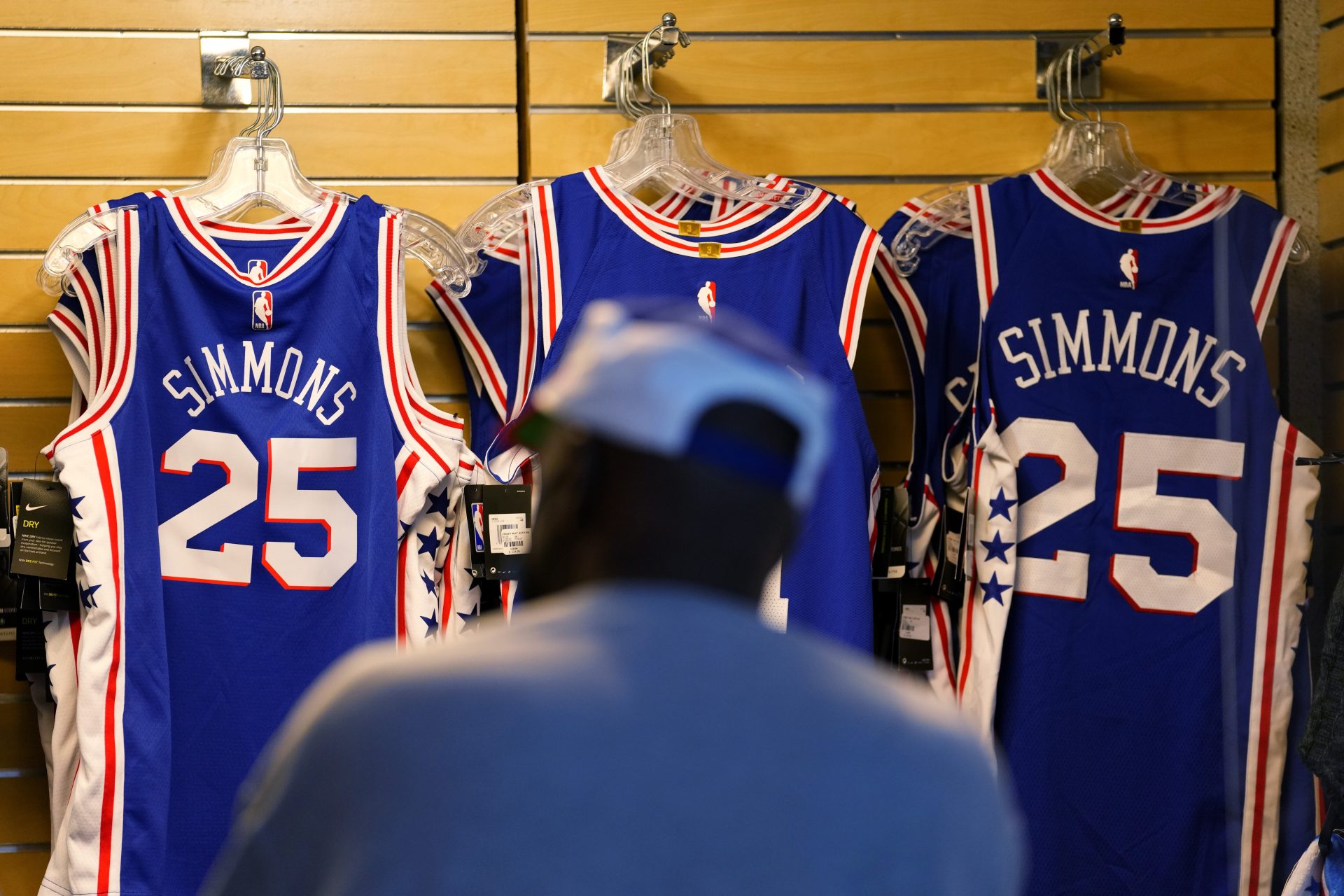 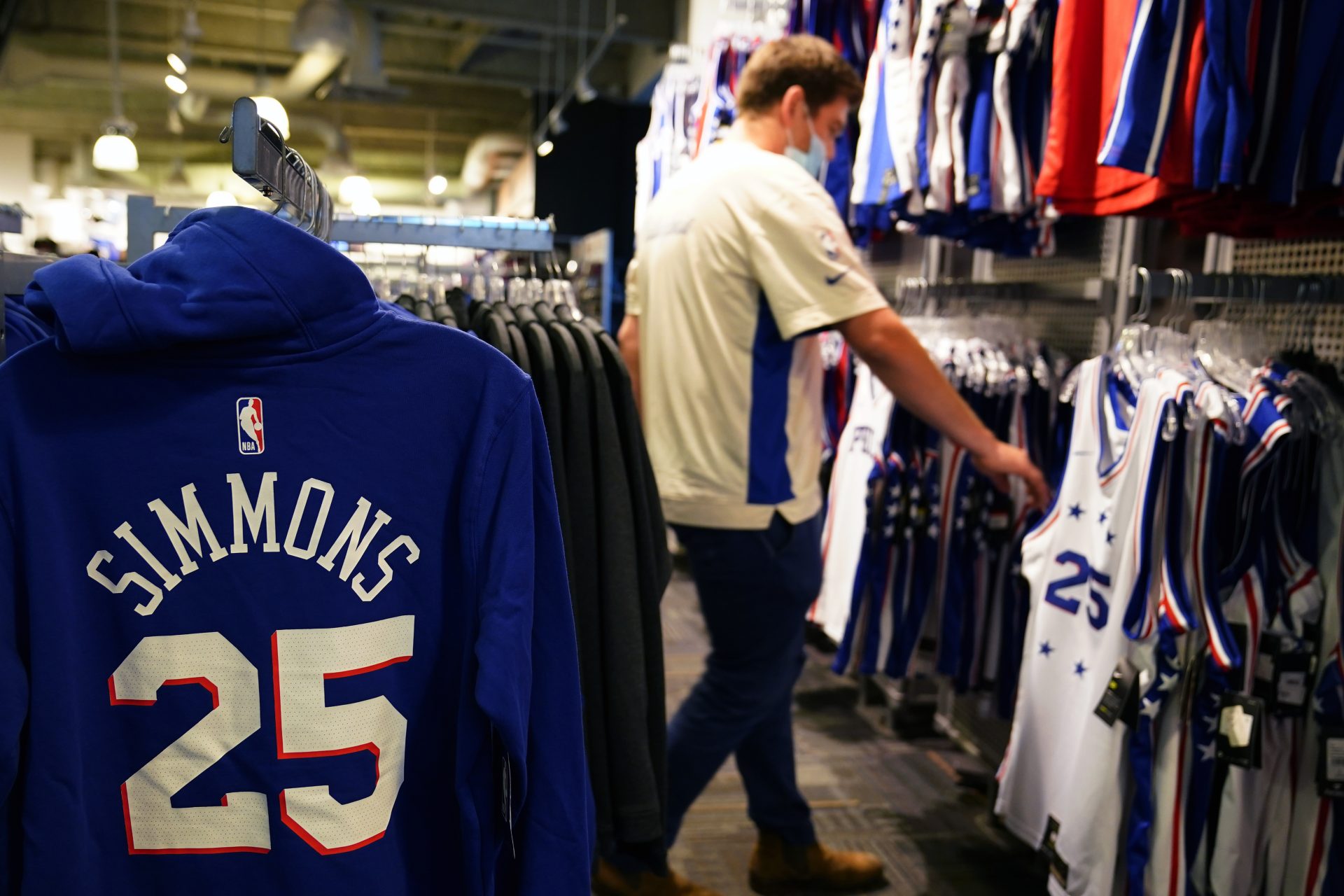 “Granted, this a three-shooting time in the NBA. That ain’t Ben. He’s not that guy. He’s not that guy,” Hart said. “Now, because of the media and how they, you know, position things, somehow we forgot about all the good that he did. Wasn’t he an All-Star? Wasn’t he all-defensive team? What are we talking about here?”

Allen Iverson has as good a chance at suiting up for the Sixers as Simmons this season, though their gear does occupy the same space in merchandise outlets throughout Wells Fargo Center.

Simmons might be on the NBA clearance rack, but his No. 25 jerseys hung in the team store for the low, low price of $134.99, and T-shirts, plush creatures and Fatheads (for $19.99) were all still available.

It took several loops around the concourse about an hour before tipoff to find at least one fan wearing Simmons merch. Gerald McDonald, a New Jersey native who moved this year to Philly, wore a Simmons jersey with No. 25 emblazoned over an image of the Liberty Bell. McDonald bought it before last season’s playoffs to replace a tattered Iverson jersey.

“He’s not feeling us no more,” McDonald said. “I’m trying to figure out if there’s an insurance policy with the jersey. From the looks of it, it looks like it’s over. It’s like a bad breakup. I guess the fans have to deal with it, so I guess we’re done, too.”

McDonald laughed as he noted he should have picked Embiid.