Pittsburgh Steelers quarterback Ben Roethlisberger (7) gets up slowly after being sacked during the first half of an NFL football game against the Las Vegas Raiders in Pittsburgh, Sunday, Sept. 19, 2021.

Steelers’ offseason plan put them on road to nowhere

The Steelers are 1-3, the worst start with a healthy Ben Roethlisberger since they dropped their first four games in 2013.

The franchise (publicly anyway) flirted with moving on before bringing Roethlisberger back for an 18th season, albeit at a reduced salary cap number. Roethlisberger chose to return in hopes of avoiding having a blowout home playoff loss to Cleveland serve as the dismal period on a likely Hall of Fame career.

So Pittsburgh spent the offseason tweaking everything around Roethlisberger — completely revamping the offensive line and overhauling the offensive staff chief among them — in hopes of propping open the Super Bowl window just a little longer.

The plan relied heavily on two things: that two years removed from right elbow surgery Roethlisberger would return to the form he showed in 2018 when he led the NFL in passing, and that Pittsburgh’s defense would play well enough to buy first-year offensive coordinator Matt Canada time to figure things out.

Neither has happened. The 39-year-old Roethlisberger can’t seem to get into any semblance of a rhythm, the defense is alarmingly average and a month into the 2021 season, time may already be running out.

The Steelers are 1-3 following a 27-17 loss in Green Bay on Sunday, the worst start with a healthy Roethlisberger since they dropped their first four games in 2013 on their way to missing the playoffs. They trail AFC North rivals Cleveland, Baltimore and Cincinnati by two games a quarter(ish) of the way through the schedule and don’t appear particularly close to putting everything together. 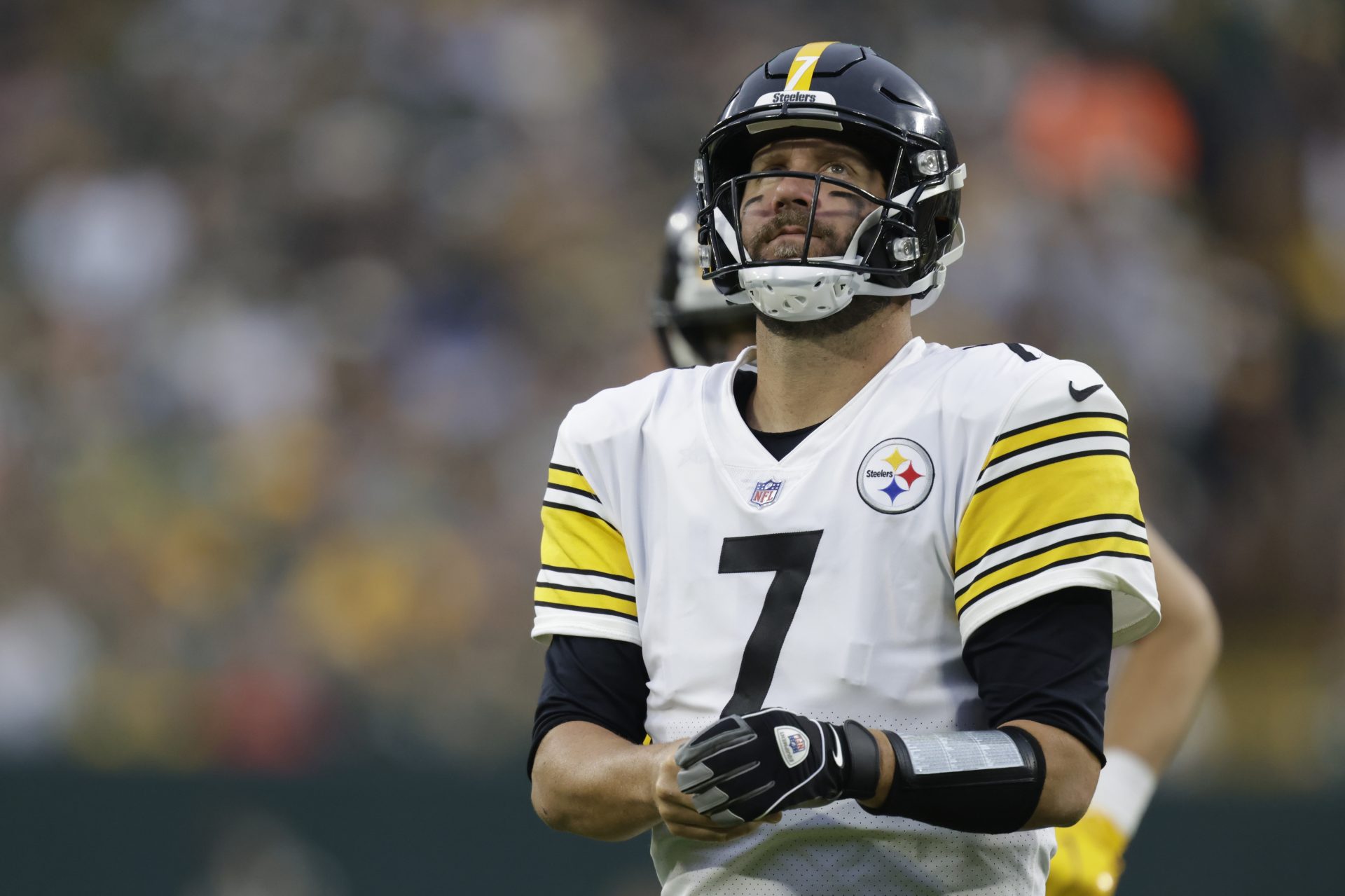 Pittsburgh Steelers’ Ben Roethlisberger reacts as he walks off the field during the second half of an NFL football game against the Green Bay Packers Sunday, Oct. 3, 2021, in Green Bay, Wis.

“We need more detail in our play, more understanding, and that will produce the splash that’ll get us out of stadiums,” coach Mike Tomlin said. “There is not enough splash.”

There is not enough of a lot of things, perhaps most alarmingly quality play from a player that’s been the franchise’s fulcrum for nearly two decades. Roethlisberger completed 26 of 40 passes for 232 yards with a touchdown and an interception.

While he did become the eighth quarterback in NFL history to reach 400 touchdowns when he connected with Diontae Johnson for a 45-yard strike in the first quarter, too often he looked tentative, skittish and sloppy.

If he wasn’t overthrowing wide receiver JuJu Smith-Schuster on plays that could have turned into touchdowns, he was failing to recognize teammates running free or settling for check-downs that went nowhere. For perhaps the first time all year, protection wasn’t a major issue.

Yes, he was sacked twice, including one that resulted in a fumble the Packers turned into a go-ahead touchdown. Yet the offensive line showed a small modicum of progress otherwise.

Rookie running back Najee Harris ran 15 times for a season-best 61 yards. Roethlisberger was only hit five times in 45 drop-backs, a significant dip from the previous two weeks.

And still, it wasn’t nearly enough to halt a slide that began 10 months ago. The Steelers are 2-8 since their 11-0 start to 2020, with six of the losses coming by at least nine points.

“I think this is going to test us all,” Roethlisberger said. “We need to look in the mirror, and we need to figure out what path we want to take.”

Therein lies the problem. The Steelers and Roethlisberger chose this path last winter when both sides had every opportunity to move on, a path that is increasingly looking like a road to nowhere. 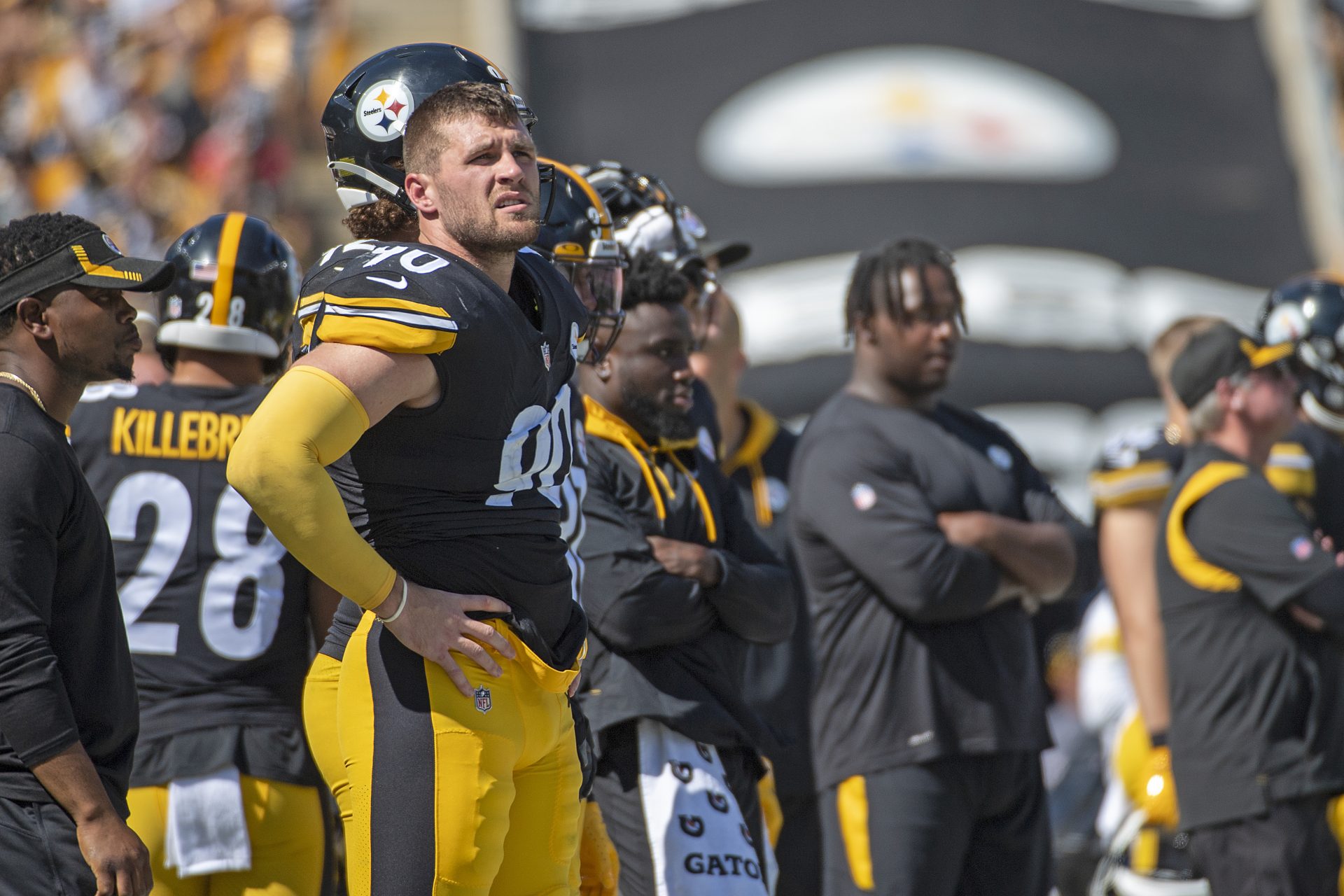 T.J. Watt did some T.J. Watt things in his return from a one-game absence because of a groin injury. The star outside linebacker had two sacks and recovered a fumble, though he also found himself futilely chasing Green Bay quarterback Aaron Rodgers to the end zone on a 4-yard touchdown run in the second quarter that tied the game.

Roethlisberger’s accuracy going downfield. The missed chances with Smith-Schuster came a week after he failed to connect with James Washington and Pat Freiermuth on passes that could have produced momentum-flipping scores.

Roethlisberger is averaging just 9.5 yards per completion, the same spot he was a year ago when Pittsburgh’s offense became overly reliant on the short passing game in an attempt to offset the worst rushing attack in the league.

Pressley Harvin III. The rookie punter beat out veteran Jordan Berry for the job during training camp, but has struggled with consistency. He’s averaging a modest 41.8 yards per punt and his 20-yard shank in the fourth quarter on Sunday set up Green Bay’s game-clinching touchdown.

Help may be on the way this week depending on right tackle Zach Banner’s progress. The team activated him off injured reserve last week as he recovers from a knee injury, signaling he is close to a return. … G Kevin Dotson (hip flexor) and DB Cam Sutton (groin) left against the Packers.

1 — the number of times the Steelers have gone over 100 yards rushing in their past 16 games (playoffs included). They are 8-8 in those games.

The Steelers play four of their next five games at Heinz Field, three of them against teams that failed to make the playoffs last season. Anything worse than 3-2 and any chance to contend for a postseason spot likely vanishes.

Underlying all the labor shortages? A ‘crisis’ in the child care sector creating a vicious cycle for working parents