The earliest this measure could see a referendum is spring 2023.

(Harrisburg) — Republican lawmakers in Pennsylvania on Monday unveiled sweeping changes to the conduct of elections through a proposed constitutional amendment, the latest turn in a partisan power struggle over elections in the wake of former President Donald Trump’s baseless claims that last year’s presidential contest was rigged against him.

The Republican-penned measure passed the House State Government Committee on party lines, 15-10. One provision would substantially toughen Pennsylvania’s existing identification requirements for a registered voter to cast a ballot, both in-person and by mail.

Gov. Tom Wolf, a Democrat, in June vetoed a wide-ranging Republican bill that was opposed by all but one Democratic lawmaker. With a Senate committee preparing to consider a narrower, bipartisan bill, some of those disputed provisions from the GOP’s partisan bill are ending up in the proposal to amend the constitution.

A governor has no veto power over it.

To amend the state constitution, a proposal must pass both chambers of the state Legislature twice, once each in consecutive two-year sessions, before going to voters in a statewide referendum. The earliest this measure could see a referendum is spring 2023. 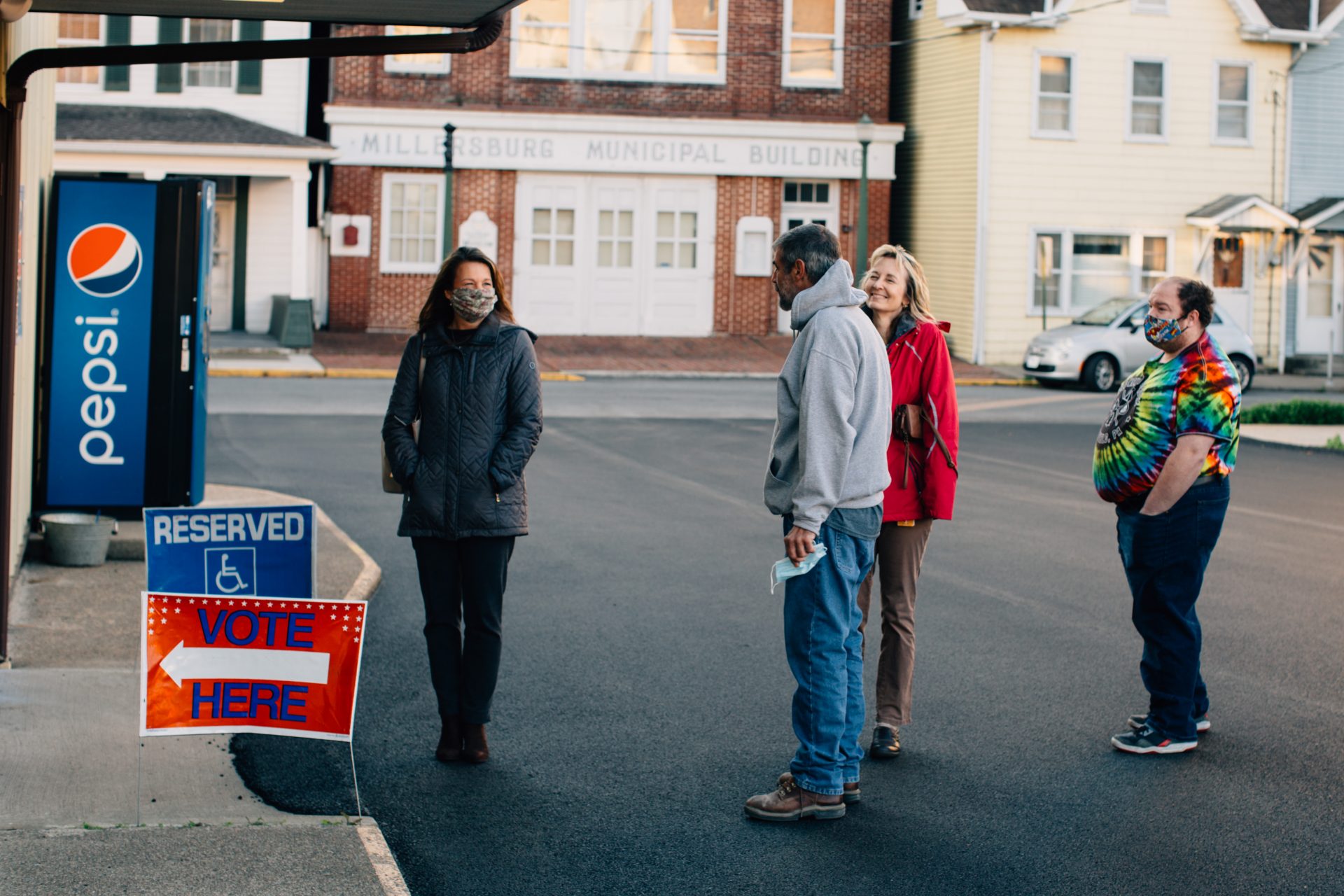 Voters wait in line outside a polling place in Millersburg, Dauphin County, on the morning of Nov. 3, 2020.

The measure would newly require the signature of someone voting by mail to be matched to their signature on file and require a voter to provide a government-issued ID every time before they vote.

That would eliminate provisions in existing law that allow the use of government checks, paychecks, utility bills and bank statements that are current, as well as student IDs and employee IDs.

Voters also must show ID only when voting in a particular precinct for the first time, while mail-in voters are not required to provide a photo ID when applying for a ballot or to insert a photocopy of an ID when mailing in their ballot.

Democrats have strenuously opposed toughening the voter ID law, calling it an effort to take away the right to vote and noting that there is no track record of in-person voting fraud in Pennsylvania.

Another provision would make the office of the state’s top election official, the secretary of state, into an elected position with four-year terms. Currently, the position is a gubernatorial appointment in Pennsylvania.

Nearly every state has a secretary of state, and the position is an elected job in three-fourths of them.

In Pennsylvania, Republican lawmakers have strenuously objected to how Wolf’s appointed secretaries of state have interpreted state election law around last year’s election. Those decisions have been backed up by courts repeatedly.

As Trump allies go state-to-state pushing to “audit” last year’s presidential election, the measure would require election results to be audited by the state’s auditor general before certification. The auditor general’s office was created as a fiscal watchdog.

It would also require paper ballots to have a watermark to prove authenticity and be open to “public inspection” after the election is certified.

Currently, state law does not make paper ballots a public record and election analysts could not think of a state that does, except for Georgia, which this year made scanned ballot images a public record and ordered the secretary of state to create a pilot program to post the images.

If the intention is to allow physical access to ballots, such access will need to be tightly controlled, with access records, observation and video recording in a secure facility to prevent and catch tampering, said E. Jonathan Sebes, the chief technology officer at the California-based OSET Institute, which is devoted to research on election infrastructure and administration.

Still, even if ballot images are posted online, they can be tampered with, Sebes said.

Meanwhile, he said, a watermark is not by itself a sign of authenticity, and may be impossible to put on each ballot. Overseas and military voters may print their own ballots, for instance.

Audrey Kline, the national policy director for the Washington-based National Vote at Home Institute, said she’s never seen ballot watermarks in practice and her organization doesn’t view it as a best practice, mainly because it’s expensive.

In any case, ballot styles are difficult to fake, Kline said.