Alice “Candy” Loughney grew up in Pittsburgh, where her father, Joseph M. Barr (pictured here), was mayor. Candy, now 71, has Alzheimer’s disease and moved into a long-term care facility in Monroeville after her symptoms became too much for her husband to manage.

Pa. lawmakers know a dementia care crisis is coming. Will they agree on a response?

The Wolf administration is focused on general improvements to nursing homes, including increasing the amount of direct care residents get each day.

(Harrisburg) — Democratic Gov. Tom Wolf this week said he supports large investments to address a growing dementia care crisis in one of the nation’s most rapidly aging states, including millions to back contested reforms of Pennsylvania’s troubled eldercare industry.

But the governor offered no concrete numbers for the total investment needed and no outline of the political path forward through the GOP-led General Assembly. For their part, legislative leaders declined to comment on what, if anything, must be done.

Wolf’s comments come in response to a recent Spotlight PA and PublicSource investigation that found the state is woefully unprepared to address the ballooning need for dementia services and the toll it will take on providers and family caregivers alike.

Among other things, the investigation revealed that few state-licensed long-term care facilities have dementia-specific accommodations, nursing homes are short-staffed, and care costs are exceptionally high.

Key action items in a state-commissioned readiness plan remain incomplete or not yet started seven years later, while a task force formed by Wolf in 2018 to spearhead the work has no money at its disposal, slowing progress as urgency grows.

The chair of the task force, Jennifer Holcomb, said action is desperately needed.

Pennsylvania’s Department of Aging — which oversees the task force — blames the slow pace of progress on a lack of resources, even as its funding requests to the legislature for dementia-related initiatives have remained flat. 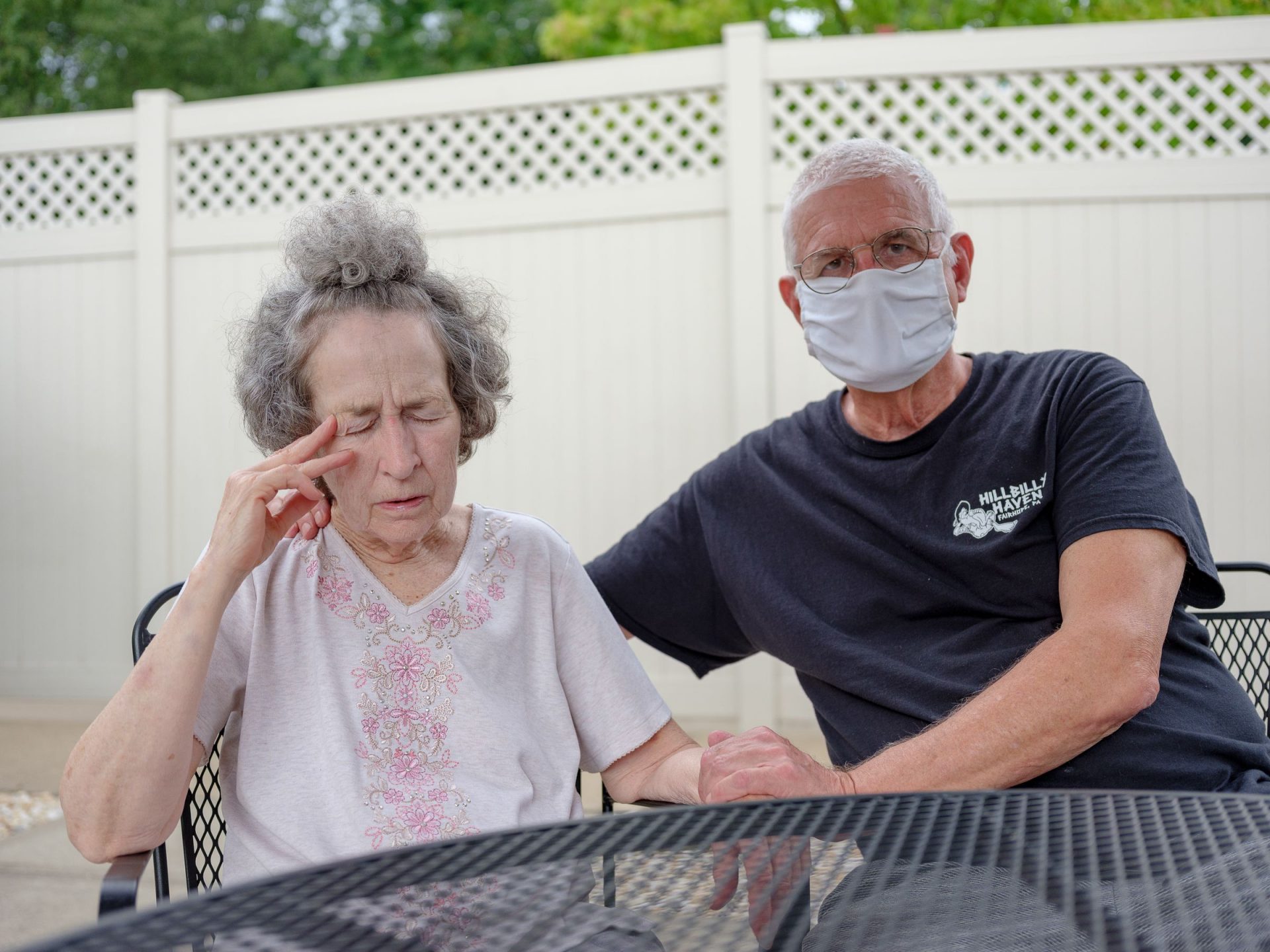 Pat Loughney (right) cared for his wife, Candy, in their home until she became ill after eating medicated soap. Candy is one of 280,000 Pennsylvanians over the age of 64 living with Alzheimer’s disease, the most common cause of dementia.

Wolf’s office told Spotlight PA the governor welcomes funding to support the task force’s “critical work” but noted it would need to be authorized by the General Assembly through the budget process.

Despite older voters being a highly sought after constituency by both parties, legislative support hasn’t been a guarantee. In 2012, a bill that would have kickstarted the state’s readiness plan failed to earn majority support, in part because it included unrelated regulations on the indoor tanning industry that drew opposition. Then-Gov. Tom Corbett single-handedly launched the planning process months later by executive order.

A bill to create a public awareness and education campaign for early diagnosis of Alzheimer’s disease and dementia disorders passed the state House in June with just one no vote and is awaiting consideration in the Senate.

But experts said that while awareness is important, the problem requires tangible resources.

That includes more investments in the frontline work performed outside of nursing homes and congregate care settings, places typically seen as last resorts.

“The only reason I have a job and the other social workers we just hired have jobs is because of philanthropy,” said Alison Lynn of the Penn Memory Center in Philadelphia, noting the economics of care often disincentivize more proactive services and interventions.

“Our jobs are completely funded by donations because we can’t bill [insurers] for the types of services we provide, by and large.”

President Joe Biden wants to inject $400 billion into home-care programs, which assist dementia patients and others nationwide, but the effort remains in limbo.

In Pennsylvania, Democratic lawmakers said efforts to address the state’s looming dementia care crisis could also be funded by a rare state budget surplus buoyed by a windfall of federal COVID-19 relief money that has been mostly squirreled away by Republican leaders.

“To ignore the lack of support for people with dementia and the facilities that provide their treatment and care as we make these allocations is unconscionable,” said state Sen. Maria Collett (D., Montgomery), a former long-term care nurse and minority chair of the state Senate’s Aging & Youth Committee.

Other leaders of the Aging & Youth Committee and the state House’s Aging & Older Adult Services Committee did not respond to requests for comment. 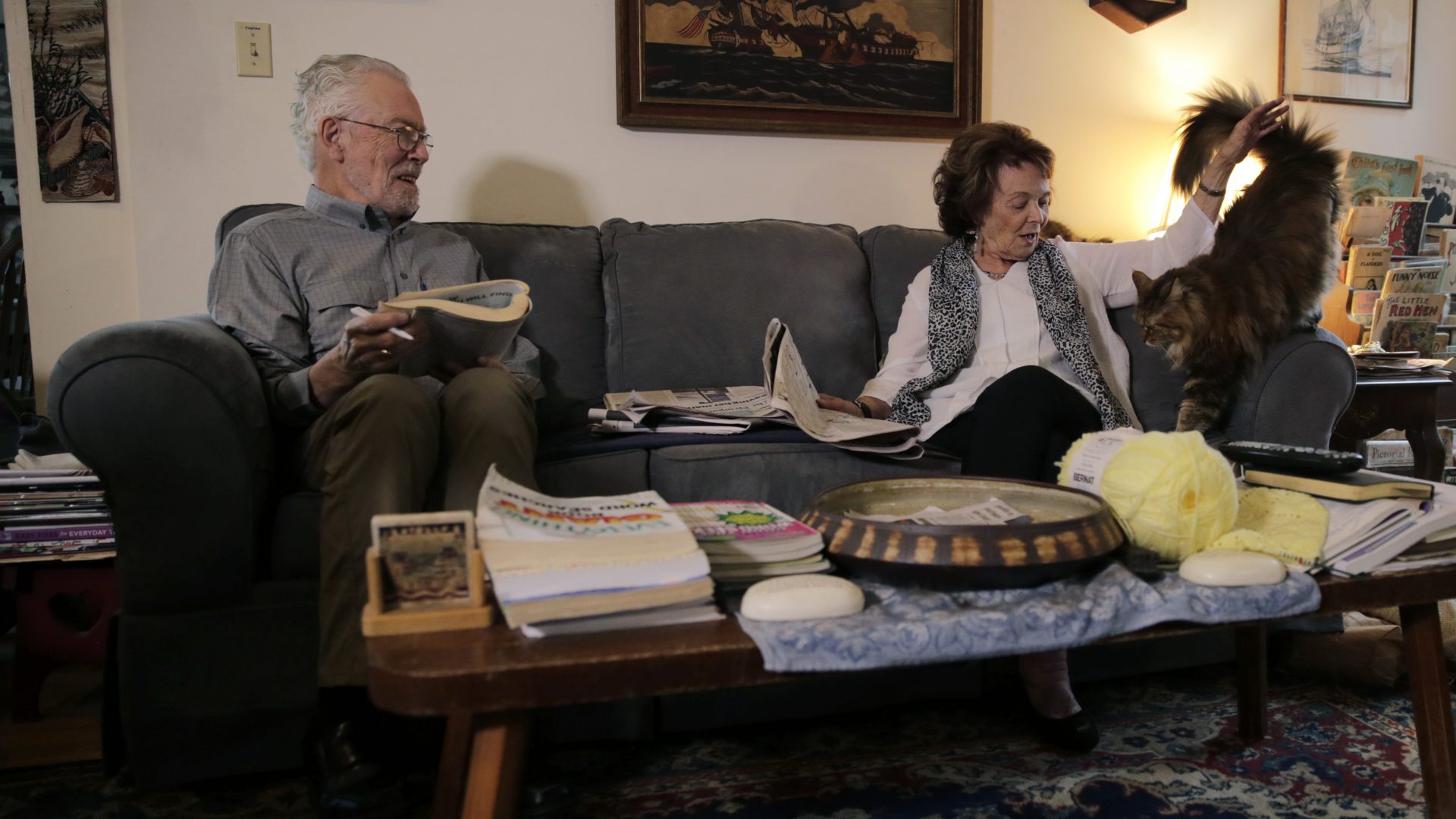 In this Nov. 22, 2019, photo, Charles Flagg, who is stricken with Alzheimer’s disease, works on a word puzzle while sitting with his wife Cynthia, right, at their home in Jamestown, R.I. Flagg is participating in a study on the drug Aducanumab. New results were released on the experimental medicine whose maker claims it can slow the decline of Alzheimer’s disease, the most common form of dementia.

Both Collett and Wolf — who signed the budget into law — said the amount isn’t nearly enough.

While dementia patients with severe symptoms in nursing homes are more likely to require specialized care in secure memory care units, many more will have milder symptoms and live in traditional units with fewer safeguards — at least until their symptoms progress.

Wolf’s office said regulations proposed in June would have a dramatic impact on the quality of care those in state-licensed homes receive.

The regulations would increase the amount of time workers in those facilities must spend with patients to the federally recommended minimum of 4.1 hours per day. Pennsylvania currently requires nursing homes to provide residents with 2.7 hours of “direct care” daily.

Meeting the higher quota would require eldercare homes to spend significantly more on staffing, and that has led to pushback from some in the industry.

LeadingAge PA, an advocacy group for nonprofit providers, questioned the timing, citing technological advances and other innovations it says allow care homes to do more with less.

Wolf spokesperson Lyndsay Kensinger defended the plan, telling Spotlight PA in an email the administration will offset hundreds of millions of dollars in compliance costs by raising Medicaid reimbursements, a primary funder of dementia services in nursing homes statewide.

“If this regulation is approved through the regulatory process it will be funded,” Kensinger said, adding that the administration will use both state and federal funds. “The estimated cost of the increase is $385.7 million in total funds, $182.5 million of which is state funds.”

Jason Thompson, a spokesperson for Senate President Pro Tempore Jake Corman (R., Centre), echoed the criticism. He said facilities need “the flexibility to deal with those difficult and unique financial circumstances — not unfunded mandates from the state.”

Kim Jackson, a Service Employees International Union-affiliated nurse at a Pennsylvania nursing home, supports the Wolf administration’s proposal but doubts it works without a wage hike — something Wolf is also pushing for.

“It’s not doable because they don’t pay high enough wages for people to live and not live in poverty,” Jackson said.