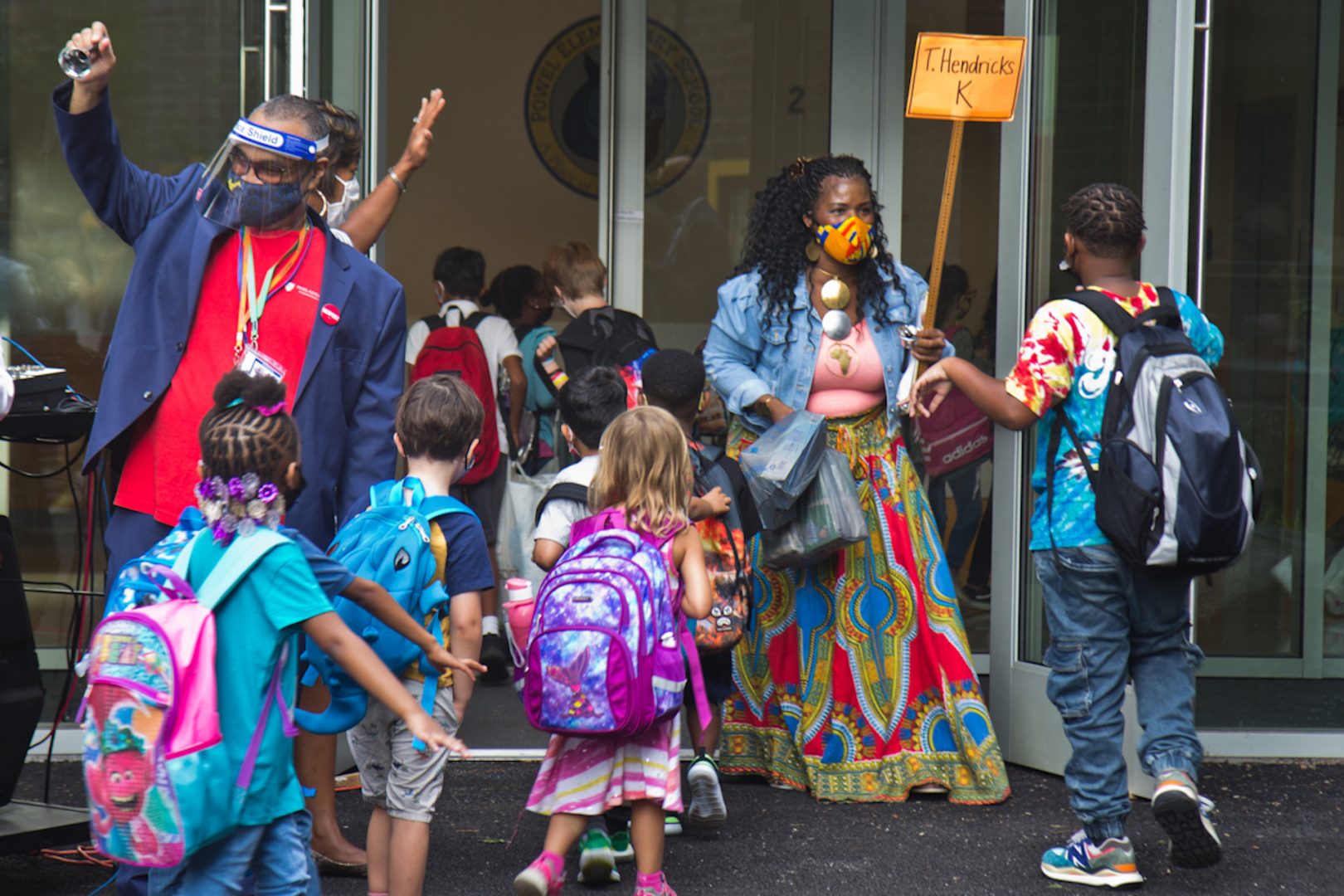 The final piece of the school-vaccination puzzle may soon fall into place, with Pfizer’s recent announcement that it has developed an effective vaccine for children ages 5-11.

But what exactly that means for America’s educators and parents remains uncertain.

“I wouldn’t say it’s going to be like the magic bullet that ends the pandemic,” said Neal Goldstein, assistant professor of epidemiology at Drexel University.

Expanded vaccine coverage could, however, open the door to new, scaled-down strategies for virus mitigation.

“I call it erring back toward normal,” said David Rubin, director of the Policy Lab at Children’s Hospital of Philadelphia. “I think we’re moving in that direction. We’ve got a couple of hurdles to get through.”

The first and most obvious is regulatory approval. Pfizer said it will seek emergency use authorization from the Food and Drug Administration. If that happens soon and the process takes about as long as prior vaccine approval processes, one could expect children to start receiving vaccines in mid- to late October.

The vaccine requires two shots spaced 21 days apart, meaning children in this age group won’t be fully vaccinated until November, at the earliest.

WHYY News talked with Philadelphia area epidemiologists to ask how this vaccination campaign will roll out and how it could influence the way schools operate.

Pfizer’s announcement comes at a crucial time for Pennsylvania and other states in the Northeastern United States.

Largely spared the worst of the delta variant wave that rocked the South this summer, the Northeast could see a COVID resurgence during the fall and winter. That’s exactly what played out last year, before vaccines were available.

“We’re already seeing evidence in our own models of the last few weeks of the northern area starting to heat up,” said Rubin.

There’s hope that highly vaccinated regions of the Northeast — like Southeastern Pennsylvania — could avoid the kind of spike in severe illness that can stretch hospital capacity.

Though the delta variant is more transmissible than prior coronavirus variants, evidence doesn’t suggest it’s significantly more likely to make children seriously ill. Young people are still far less likely than older people to be hospitalized or die from the virus.

But hospitalizations have risen, and children are able to transmit the virus to others. Vaccinating as many children as possible before cold weather descends could help suppress any incoming COVID wave.

That’s partly why some health experts believe communities should set up public vaccination clinics for children instead of relying on individual pediatricians. Speed could be important here.

“And the more visible we make this process, the more trust we’ll see across communities,” said Carolyn Cannuscio, a social epidemiologist and assistant professor at the University of Pennsylvania’s Perelman School of Medicine. “We’ll establish the social norm of getting children vaccinated.”

Will kids actually get vaccinated?

That raises the question of whether parents will choose to get their younger children vaccinated.

In an August poll by the Kaiser Family Foundation, only a quarter of parents who have children ages 5-11 said they would immediately vaccinate those children. An equal number said they definitely would not have their children get COVID vaccines. The plurality of parents — 40% — said they’d “wait and see.”

Generally, younger people have been less likely to get vaccinated.

In Pennsylvania, only about 42% of people ages 15-19 are fully vaccinated. That said, in the collar counties around Philadelphia, that age group has vaccination rates ranging from 50% to 61%. Pennsylvania’s figures do not include data from Philadelphia.

And experts are frank: Convincing some parents to get their children vaccinated against a disease that is unlikely to seriously sicken them will be a challenge.

“Kids are clearly susceptible, and they get sick. They just don’t get as sick or have the outcomes that adults have,” said Goldstein. “This will lead some parents to say, ‘Oh, well, then in this case, I don’t need to vaccinate my child.’ And it’s a tough spot for public health to be in.”

Adding another layer of complication is the fact that the Pfizer vaccine may cause a rare heart condition in some young men — although the risk seems to be higher for those who contract the virus itself.

Even in a best-case scenario for epidemiologists, it seems there will still be a substantial proportion of students attending school unvaccinated for the foreseeable future.

The future of in-person schooling

By the start of 2022, schools will likely be dealing with a reality where everyone in their buildings has been offered the option of a vaccine, but some have opted against it.

The question is how to proceed from that point.

That’s where you’ll start to see opinions split — among parents, educators, administrators, and even medical experts.

Most in the scientific community believe in-person school should continue, barring a major change in COVID’s frequency or virulence.

But some experts, like Cannuscio of the Perelman school, preach caution when it comes to eliminating interventions such as masking, isolation, and ventilation.

“I would say set your mind for this whole school year for thinking about using mitigation measures,” said Cannuscio.

Her argument is twofold.

One, she believes community transmission has to be much lower before schools can relax their approaches. Two, she worries a rollback could send the wrong signal and make it difficult to reverse course, if needed.

Cannuscio points to the Centers for Disease Control and Prevention’s changing guidance on mask use for vaccinated people. Initially, the agency said the vaccinated could go unmasked, but then changed its recommendations as delta began to surge.

“Suddenly, that social norm we had established of wearing masks indoors and public settings or at gatherings — people stopped doing that. And it was too early,” said Cannuscio.

Pennsylvania officials have largely adopted Cannuscio’s logic. For instance, although high school students have been eligible for the vaccine for months, the state Department of Health’s mask mandate applies to all schools, no matter the age of the students.

David Rubin from the CHOP Policy Lab sees a path for schools — at least in some areas — to start rethinking their approaches to COVID mitigation.

There will be large pockets of the region with low community transmission and high vaccination. Those pockets should have the freedom to shift their policies. Interventions like masking, tracing, and quarantining can hamper instruction and school operation.

In other words, those policies come with a cost — and schools shouldn’t absorb them if community risk is low.

“Eventually, we’re going to treat this more, we hope, like the flu as the virulence goes down due to vaccination,” said Rubin. “We’re not going to eliminate transmission. This is about managing it.”

On the matter of quarantining, for instance, Rubin thinks schools should consider test-to-stay policies that allow the close contacts of a COVID-positive student to remain in school as long as they continue to test negative for the virus. A recent study in the Lancet suggested those policies could be as effective as isolation. Rubin believes increased vaccination among children will only bolster the argument for this less disruptive approach.

Rubin also believes that once every age group in a school community has access to vaccination, state governments should shift their tendencies. He thinks states should let school districts make their own decisions around mitigation — except in a scenario where COVID transmission threatens to overrun hospitals.

“I think we have to be careful to recognize that we err towards local decisions and individual choices in our country,” said Rubin.

But that debate is still months away, as schools anxiously await FDA authorization and an eventual vaccine rollout.

“There’ll be a lot of those conversations that play out in spring,” said Rubin. “In the interim, I think [we’re] trying to blunt the fall [and] winter peak that is developing in our area.”