Shakura Haunton, introduced as Bahir Green’s sister and guardian, wipes away tears as she talks about her 16-year-old brother, who was arrested by Chester police Friday and remains in custody.

"We are not going to sit idly by and allow this type of policing to occur in our community because somebody will die."

(Chester) — A white police officer was caught on video repeatedly punching Bahir Green, a Black teenager, while Green was being restrained in Chester on Friday. Today, Green’s family demanded the police be held accountable.

Bahir Green’s family and a crowd of supporters with signs that read “bad cops must go” and “police brutality will end” gathered in front of the Chester Police Department’s headquarters on Monday afternoon to demand justice for Green.

“We are not going to sit idly by and allow this type of policing to occur in our community because somebody will die,” said Zulene Mayfield, chair of Chester Residents Concerned for Quality Living and a spokesperson for the family.

Green’s Friday arrest was captured by passersby with cellphones who shared those videos with Balinda Hynes, Green’s aunt.

Family members who live in Chester rushed to the site of the arrest at 10th and McDowell streets, according to Hynes. Arriving after police had left, she said the group headed to police headquarters where they were told Green was still in police custody.

The family says they have yet to see Green, who remains in custody. It took them until Sunday morning to reach Green by phone, and they were only able to do so after seeking help from the District Attorney’s Office. 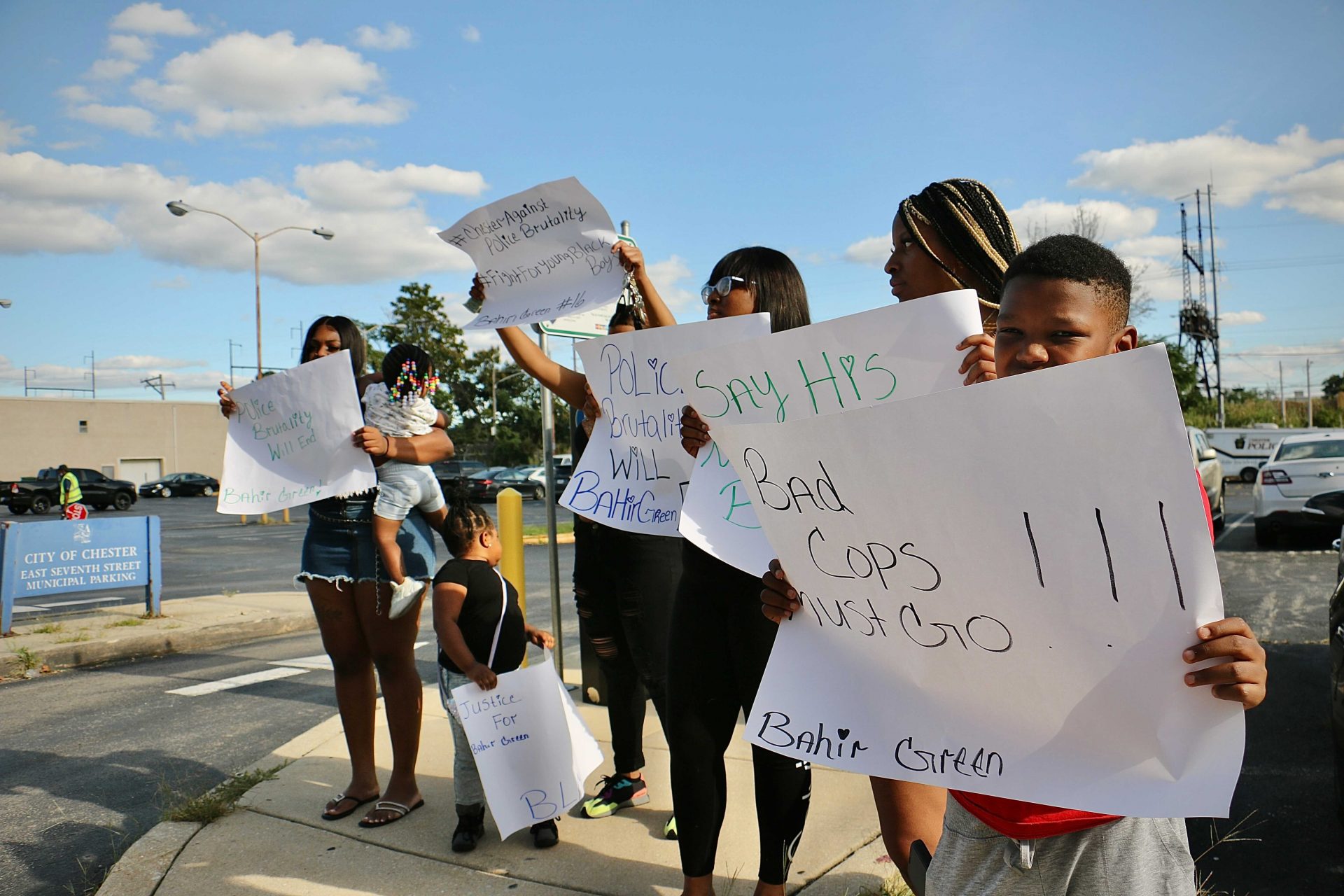 Family members and supporters of Bahir Green carry handmade signs to a press conference at Chester police headquarters. The 16-year-old remains in custody after his arrest Friday, Sept. 17, 2021. A video appeared to show police beating him while making the arrest.

The Chester Police Department did not respond to multiple requests for more information about the incident. The Mayor’s Office referred WHYY News to the police department. The Delaware County District Attorney’s Office did not immediately respond to a request for comment.

At the press conference on Monday, relatives said police chased Green into a telephone pole and didn’t immediately offer him medical help. After Green hit the pole, relatives say he exited the car with his hands up. The two videos Hynes posted on Facebook show Green on the ground as one officer begins to punch him. Two other officers can be seen helping to keep Green down on the sidewalk at the base of a stoop, each one holding one of his arms. The front end of a black car appears to have smashed into a telephone pole behind them.

Family and supporters immediately compared Green’s arrest to that of George Floyd’s, who was killed by a Minneapolis police officer after he was reported for a minor infraction.

“They could have went about that situation way different than what they did,” said Bahira, Green’s twin sister, in tears. “He’s still a child, he’s not grown.”

The teen’s age is just one reason his family members said they can’t fathom what brought the officer in question to start punching Green when he was already on the ground with his hands behind his back.

Hynes described Green as a “great kid,” the only boy out of five siblings. She said he has already experienced trauma and grief at his young age, losing his mother when he was only 12 years old. 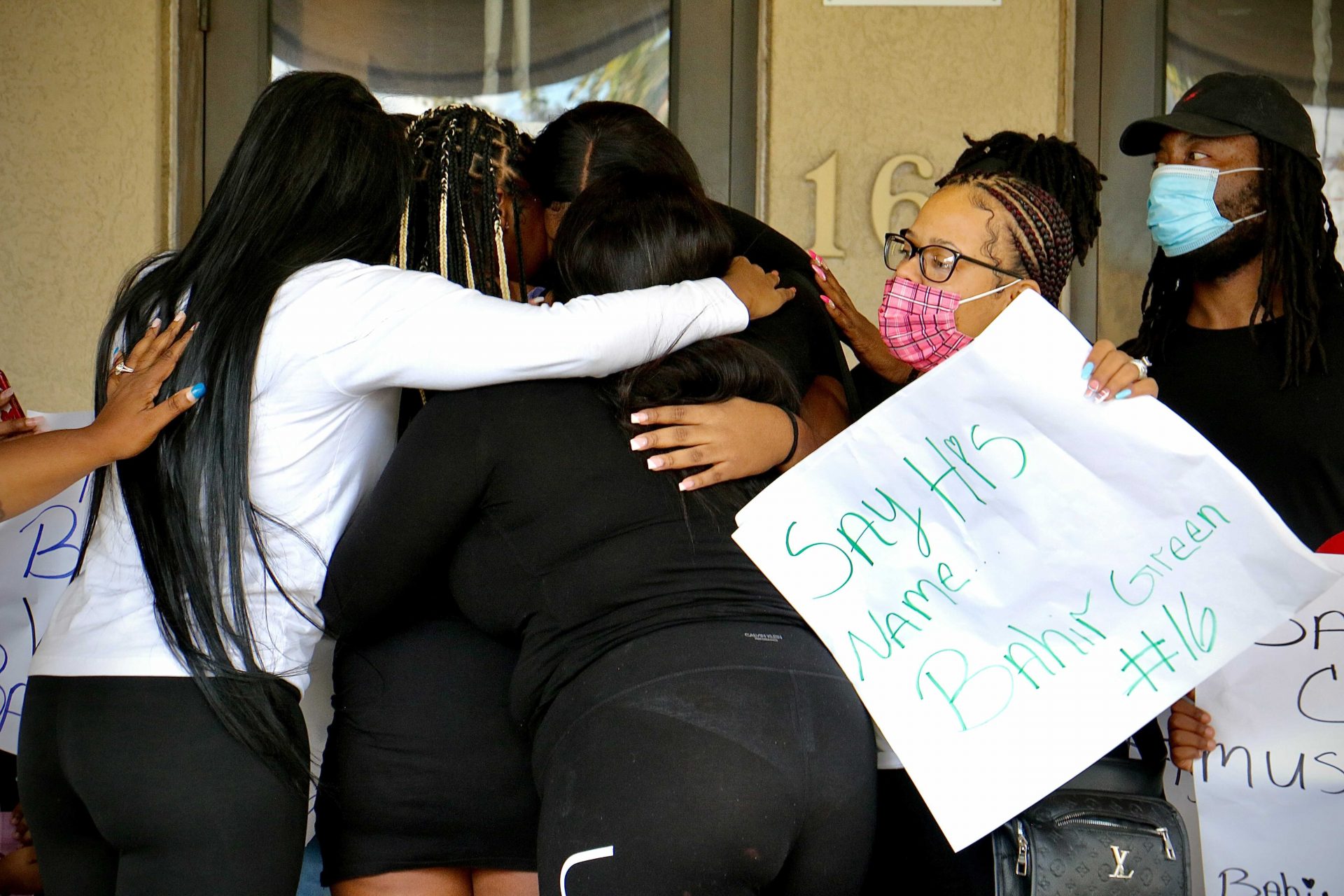 Bahir Green’s sisters and supporters comfort each other during a press conference in front of Chester police headquarters. The 16-year-old was arrested Friday and remains in custody.

Activists at the press conference were critical of a police department that has recently touted its efforts in community policing. In August, Police Commissioner Steven Gretsky credited this approach to a 63% decline in homicides in Chester.

“You can be an ally or an occupying force,” said William Jones Jr. with Chester Residents Concerned for Quality Living.

Jones said, despite the department’s rhetoric in the past year, Chester’s Black residence have yet to see the change.