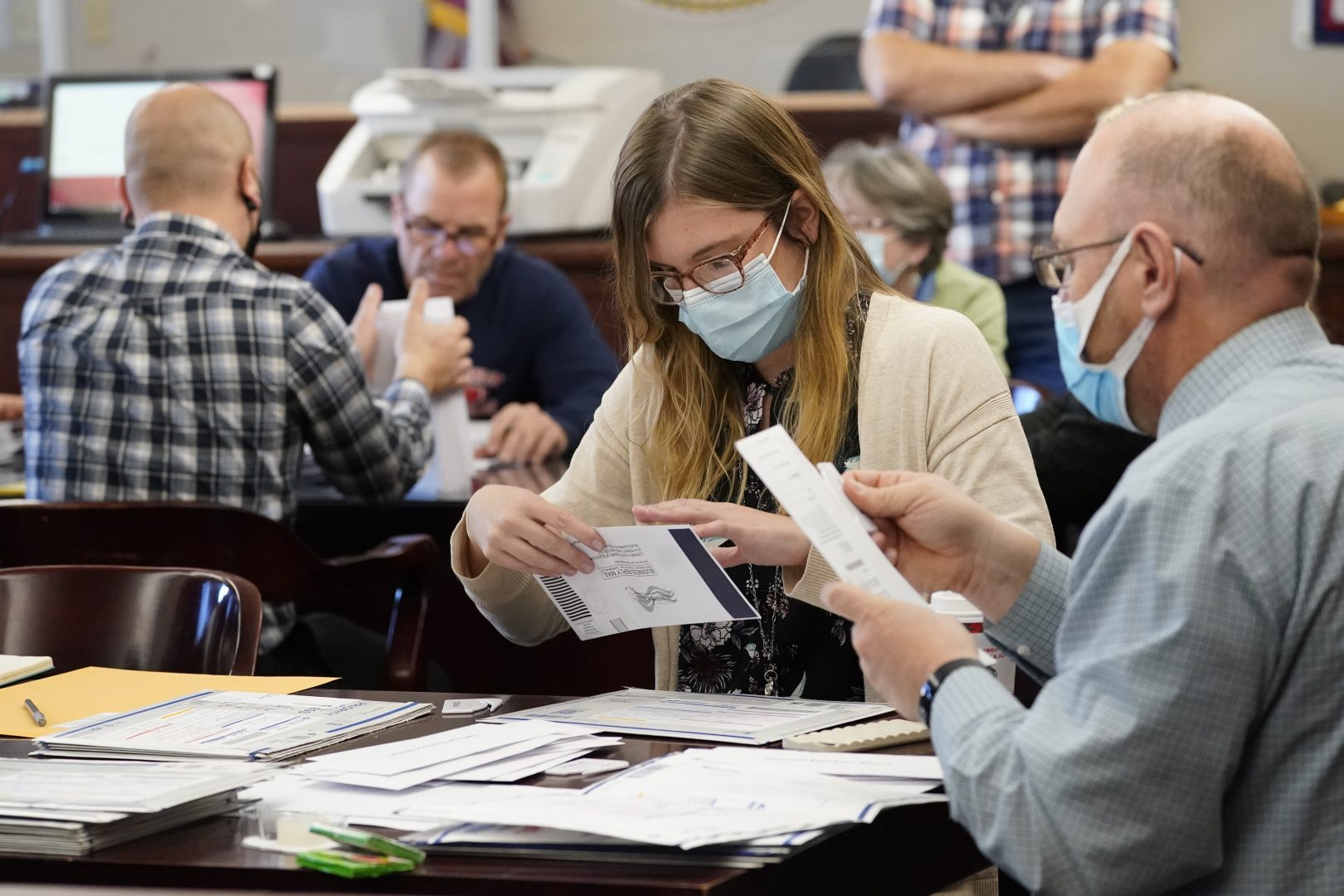 (Harrisburg) –– Pennsylvania is facing a shortage of people willing to staff polling places on Election Day. False claims of voter fraud during the 2020 election is one of the major reasons.

State election officials and advocates said many counties are having a difficult time attracting people for the tens of thousands of paid positions, despite two elections that are expected to be held before next summer.

“That is at the very top of the list of their concerns and it’s not unique to Pennsylvania,” Deputy Department of State Secretary for Elections and Commissions Jonathan Marks told WITF’s Smart Talk Monday.

Marks said workers have given a variety of reasons for leaving or retiring from the usually biannual jobs that some have worked for decades.

Many are older individuals and more likely to contract COVID-19. When the pandemic was raging last fall and vaccines were not available, Marks explained some stayed away from polling place work to avoid infection.

On top of the pandemic, state election code changes in 2019 that allowed anyone to apply for a mail-in ballot meant poll workers were dealing with millions of them in a matter of days last fall. It was only the second time counties had ever dealt with that kind of volume.

But as efforts to delegitimize Pennsylvania’s 2020 election result have intensified since last fall, some workers have told county administrators that they’ve been harassed and intimidated by people falsely claiming the results were fraudulent.

Marks said those claims are particularly problematic because workers in individual election precincts have had to bear the brunt of them.

“When people are talking about [fraud claims], they’re really questioning the integrity of their friends and neighbors,” he said. “Who wants to do that [work] if this is how elections are going to be administered going into the future?” 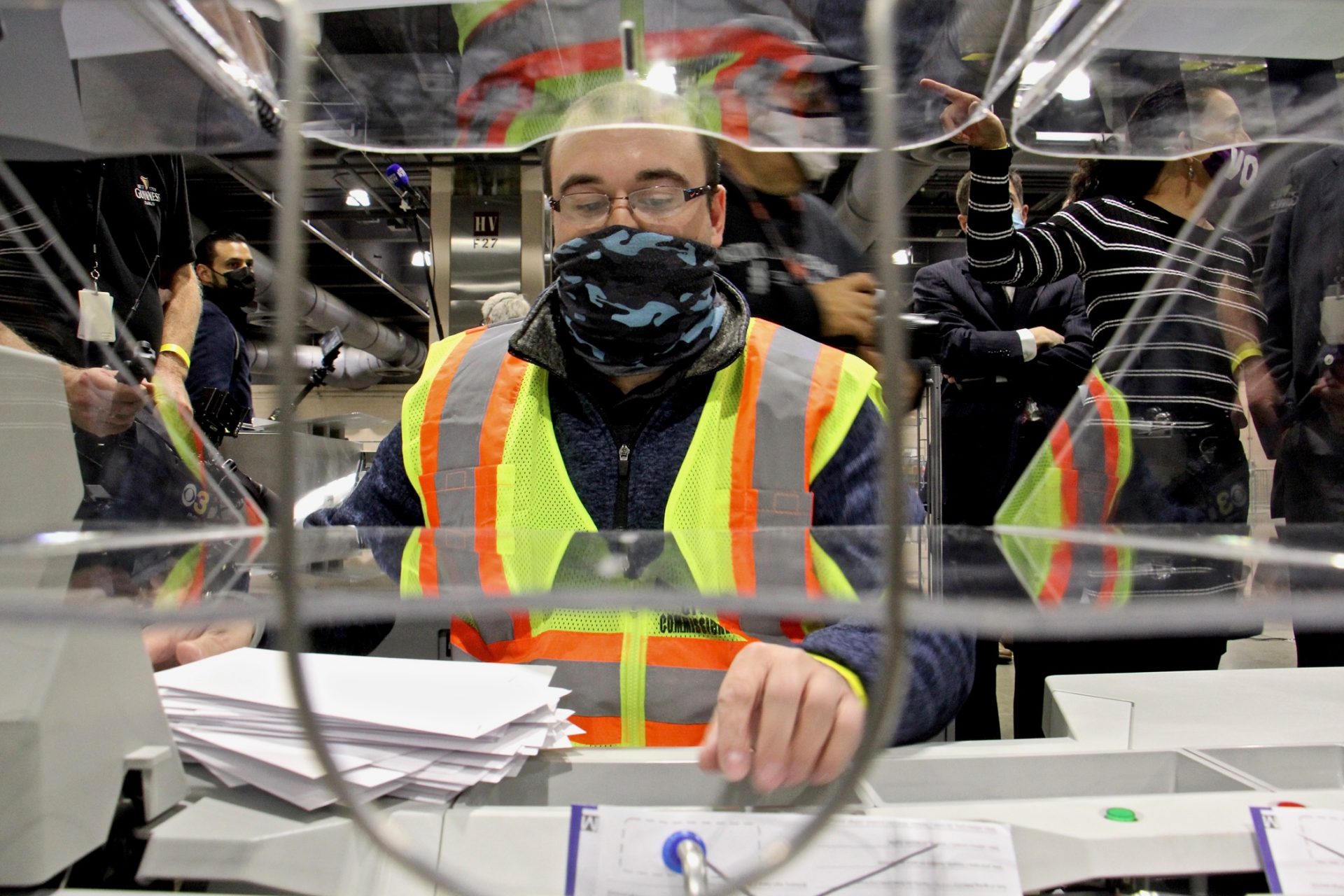 John Hansberry operates an extractor at Philadelphia’s ballot counting center at the Pennsylvania Convention Center. The machine removes sorted mail-in ballots from their double envelopes. Hansberry is using dummy ballots for this demonstration. No ballots can be legally opened before Election Day.

The New York Times reports states across the country are dealing with a similar problem. At least a third of election workers polled by the Brennan Center for Justice and the Bipartisan Policy Center in June said they felt unsafe doing elections work. To illustrate its point, the group pointed to Republican Philadelphia County Commissioner Al Schmidt, who has experienced “anti-semitic attacks” and had to hire a 24 hour security detail in the months since the 2020 election.

“Al Schmidt’s is not an exceptional case,” the groups wrote in a memo analyzing the findings. “Long used to staying in the background, [workers] have now found themselves cast as villains, scapegoated for election outcomes that some politicians and voters did not like.”

Texas and Florida, the Times reports, are among those that have approved new rules protecting poll workers from harassment. In a bid to shield them from that type of treatment, a Legal Defense Network specifically for poll workers was launched earlier this month.

In Pennsylvania, Lisa Schaefer and other election advocates have told lawmakers for months that the state can attract more poll workers by making their workloads easier. One of the best ways to do that, she told Smart Talk, is to give counties more time to get mail-in ballots ready to be counted.

Right now, workers cannot begin the process of pre-canvassing until the morning of Election Day. Schafer said some counties want to start that process as early as three weeks before then.

“[They] can better utilize their resources and not have to run two elections on Election Day,” she said.

The Department of State, for its part, said it has been advertising poll worker positions on its social media pages for the last few months and promoting benefits of the work on its website.

“We highlight those folks because they really are the heroes of our democracy: the folks who are administering the elections on the ground,” Marks said.

State lawmakers are now considering election code changes aimed at improving conditions for poll workers, including pay increases and additional training. Those ideas were part of a larger election bill introduced by Rep. Seth Grove (R-York). That was vetoed by Governor Tom Wolf in June because it also contained tougher voter ID requirements.

Wolf later said he is open to some new requirements, as long as they are included in a bill making it easier to vote. That has led Grove (R-York) to reintroduce his bill and a pair of state senators to produce their own version of those changes.

While negotiations on that legislation take place, poll workers continue to face challenges. One such worker who identified herself as Kathleen from Palmyra called in to Smart Talk Monday to voice her frustrations with those who continue to allege she and others were responsible for throwing last fall’s election.

“It is insulting to the team,” she told host Scott Lamar. “We work so hard to make sure that people can exercise this right and then these invalid comments are made.”

Rep. Grove is one of several dozen lawmakers who signed a letter asking Congress to object to Pennsylvania’s electoral college vote –despite no evidence that would call those results into question.