Kitchen worker Misael Cruz, 38, wears a surgical mask and gloves as he prepares food at Little Tong Noodle Shop that is providing meals on a voluntary donation basis for take-out only as authorities restricted gatherings and barred sit-down dining due to coronavirus concerns, Tuesday, March 24, 2020, in New York. 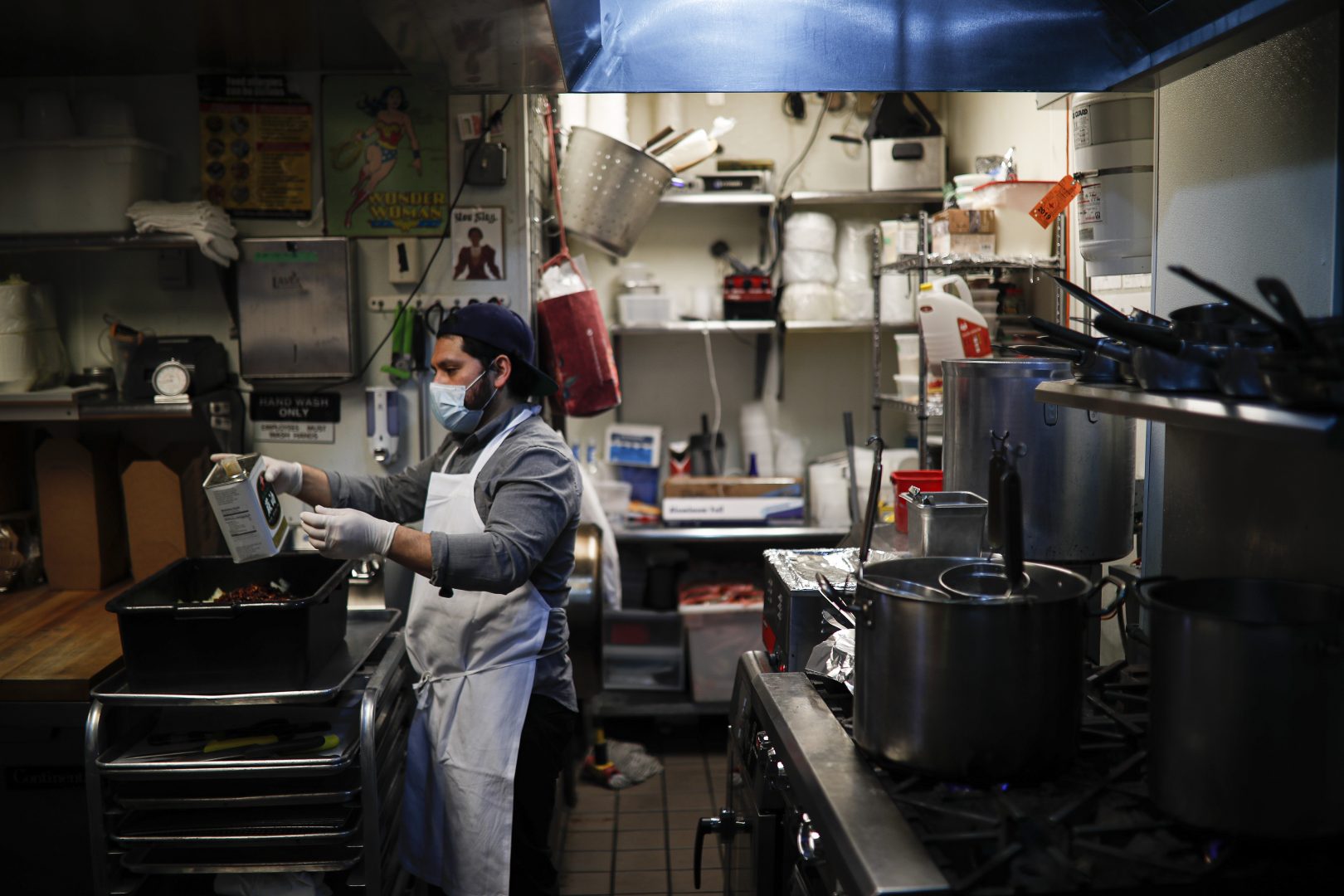 Kitchen worker Misael Cruz, 38, wears a surgical mask and gloves as he prepares food at Little Tong Noodle Shop that is providing meals on a voluntary donation basis for take-out only as authorities restricted gatherings and barred sit-down dining due to coronavirus concerns, Tuesday, March 24, 2020, in New York.

(Philadelphia) — Six months ago, a Latina prep cook in her 50s saw her male coworkers in Old City organize for raises.

With labor shortages plaguing the restaurant industry, the men threatened to quit and go work in construction if their pay did not improve, she said.

“Men, they get more rebellious,” she said during an interview in Spanish. The cook is originally from Mexico, and WHYY agreed not to publish her name due to her undocumented status and fears of losing her job.

Management gave the men raises, but did not extend the pay increase to female staffers, which then pushed them to band together.

“We said, ‘If you don’t raise [our wages], we’ll leave too,’” said the worker, who is a member of “El comité de trabajador@s inmigrantes,” or the Immigrant Workers Committee, which advocates for better conditions. In the end, after the women pressured management, pay went up by a dollar, to $16/hour.

The threat worked because the coronavirus pandemic upended the hospitality sector’s economy, with many Latino immigrant restaurant workers in Philadelphia leaving the industry after the initial business shutdowns. The lack of social safety net in the undocumented immigrant community pushed many people towards other professions. At the same time, the higher vacancies in restaurants created newfound leverage in salary negotiations for some who have remained.

Dionicio Jimenez, chef at El Rey in Center City, said when government mandates closed indoor dining, some of his staffers struck out in new directions.

“Old employees got another job… did different things: construction, landscaping, cleaning,” he said. As a result, when he tried to recall workers when restrictions loosened, many didn’t return. At first around 80% of the back-of-house staff did, but of the front-of-house staff “nobody came back,” he said.

The exodus of workers from restaurant jobs has made headlines, but the conditions of those departures depend on what options employees have. About 9% of leisure and hospitality workers nationally are immigrants without work authorization, according to the Pew Research Center. Undocumented immigrant workers have been ineligible for government assistance provided during the pandemic, and as a result many in Philadelphia depended on support from their communities to survive.

This information adds new context to complaints of staff shortages now common in food service. At the outset of the pandemic, Hispanic workers had the highest rate of unemployment of any demographic group, according to the Bureau of Labor Statistics. Foreign-born workers also had higher unemployment than their U.S. born peers during the same time. Since then, that trend has reversed, with Hispanic workers now more likely to be employed than African Americans. Hispanic and Asian immigrants are now more likely to be employed than Hispanic and Asian people born in the U.S, per the Pew Research Center.

But many have reevaluated career choices.

“There’s not a shortage of workers. It’s really related to what conditions the restaurant industry is really offering,” said Natalia Nicastro, an immigrant worker organizer with the Coalition for Restaurant Safety and Health (CRSH). Construction has more predictable hours and pays better, and some people are unwilling to return to the late nights and grinding pace of the restaurant industry.

Their absence has changed the environment for those who remain.

Worker shortages have pushed wages up in some cases. When federal Paycheck Protection Program loans were distributed, El Rey raised wages for dishwashers from $10/hour to $15/hour, and lifted hourly pay from $12-$15 to $18 for line cooks.

Still, Jimenez said he’s had trouble keeping people when other restaurants can pay even more. “Because everybody is desperate to have employees, they’re offering bonuses,” he said. Sometimes workers will get a better offer at another restaurant, and leave. “We’re stealing our own people,” said Jimenez.

The jobs that are filled have become harder without enough staff, say workers.

“If you’re working in the kitchen, sometimes you have to help the dishwasher … because of the lack of people,” said Carlos Rojas, who works as a sous chef at Buddakan in Philadelphia. Due to the lack of staff, he said he sometimes has to work on his scheduled days off.

Eréndira Zamacona, another member of El comité de trabajador@s inmigrantes, said that the restaurant industry needs to fix this culture of exploitation.

Pre-pandemic, she worked as a prep cook at a Mexican restaurant. “They hired me as a prep cook, but I basically end up doing everything there,” she said, in Spanish. “I end up washing dishes. I end up preparing food … so it’s not just one job that I do.” That job creep ended up driving her out of the industry and into domestic work. She now cleans for a living.

Zamacona also knows many people who spent much of the pandemic unemployed due to jobs disappearing, fears of COVID, or child care needs. She said the restaurant jobs have returned, but working conditions haven’t improved.

“But people are taking them. Why? Because they were totally stopped for a long time … you have to take that job now,” she said.

‘We have to find solutions’

Several factors contribute to this mix of opportunity and job stagnation.

Erica Groshen, senior economics advisor at Cornell University and former commissioner for the Bureau of Labor and Statistics, points to “monopsony” as one possible culprit.

Labor monopsony is a situation where employers are so powerful that they can keep wages low (and avoid cutting into their profit margin), because there are enough people out of work with no other option but to take the low-paying job.

“That’s where you get this dichotomy between employers saying, ‘I can’t find enough workers,’ and workers … not doing as well as you might think they should,” she said.

Another issue is that more jobs have come to require a high school or college degree, which makes it harder for workers without those credentials to enter and learn on the job, according to Groshen.

Some business owners are also looking at change on their end.

Juan Carlos Romero, owner of Philly Tacos, is a part of a group of 25 Mexican business owners, mostly restaurants but also groceries and salons, based in South Philly. They meet weekly on Zoom to discuss shared challenges, and also how they can work together to find ways to help the local Latino community.

“The idea is to improve the working conditions of our people,” said Romero in Spanish, for example by setting “fair” base salaries for the same positions, an initiative that’s still in the works. ​​”[As] small businesses, we have to find solutions for bad wages, bad conditions … [and] excessive work hours,” he continued.

Romero said everyone on his small staff makes at least $15/hour.

Even so, when Spruce Street Harbor Park offered his business the opportunity to open a branch at the waterfront installation this summer, he could not hire enough staff to run the new location and his Point Breeze restaurant at the same time.