Packages of beef cuts are displayed at a Costco store on May 24 in Novato, Calif. The prices of meats have surged, and the White House is partly blaming the handful of meatpackers that control the industry.

High meat prices are helping fuel inflation, and a few big companies are being blamed 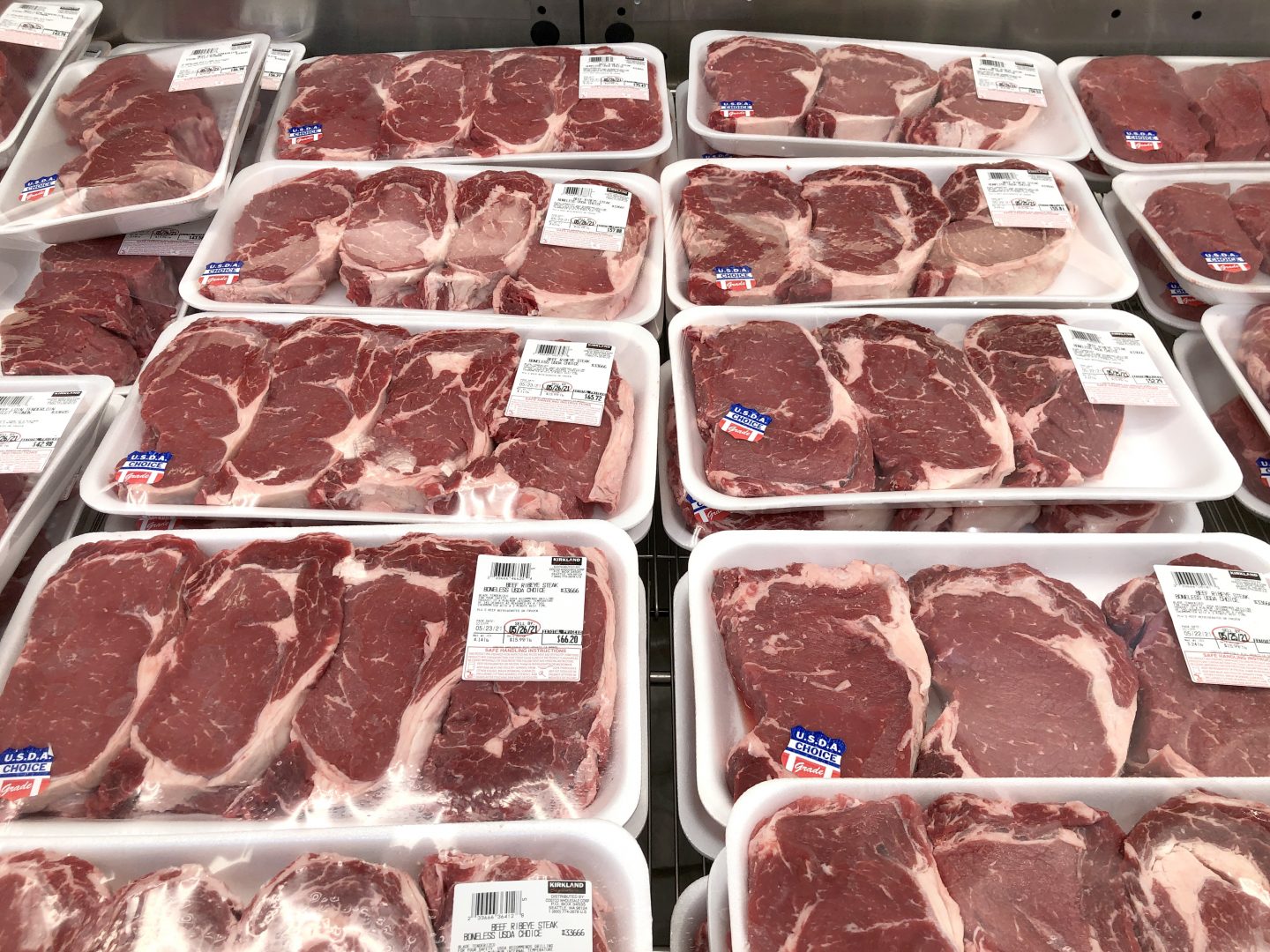 Packages of beef cuts are displayed at a Costco store on May 24 in Novato, Calif. The prices of meats have surged, and the White House is partly blaming the handful of meatpackers that control the industry.

Prices for beef, pork and chicken have surged during the pandemic, and the Biden administration believes it knows who’s partly behind it: a handful of big meatpacking companies that control most of the country’s supply.

Beef prices alone jumped 12.2% over the last year, according to new consumer inflation data on Tuesday, making it one of the costliest items in the surging bills that consumers face today at the grocery store.

The surge in meat prices is contributing to high inflation. The Labor Department reported Tuesday that consumer price index rose 5.3% in the 12 months ending in August. That’s down slightly from June and July when inflation was running at 5.4% — but it’s still near the highest level in nearly 13 years. Pork prices jumped 9.8% in the last year while chicken prices jumped 7.2%.

The White House is responding by shining a spotlight on “Big Meat,” as part of a larger campaign against what the Biden administration calls “anti-competitive” behavior by big business — even as meatpackers insist they are not to blame.

More than 80% of the beef in the U.S. is slaughtered and processed by just four big companies, including Tyson Foods and JBS USA. A similar handful of companies also controls processing of more than half the chicken in the country and two-thirds of the pork.

That means farmers and ranchers have few choices of where to sell their livestock.

Jones calls himself a conservative Republican. But he welcomes the administration’s push to bring more competition to the highly consolidated meatpacking industry.

“There has been merger after merger,” Jones said. “It’s really gotten to the point where there’s no competition in our industry at all.”

The administration says industry giants like Tyson and Smithfield have such a stranglehold on processing operations that they can command higher prices at the supermarket, while also putting the squeeze on farmers, who in some cases can’t even cover their costs.

“Farmers are losing money on cattle, hogs and poultry that they’re selling at a time when consumers are seeing higher prices at the grocery store,” Agriculture Secretary Tom Vilsack said last week. “And there are now record profits or near-record profits for those in the middle. 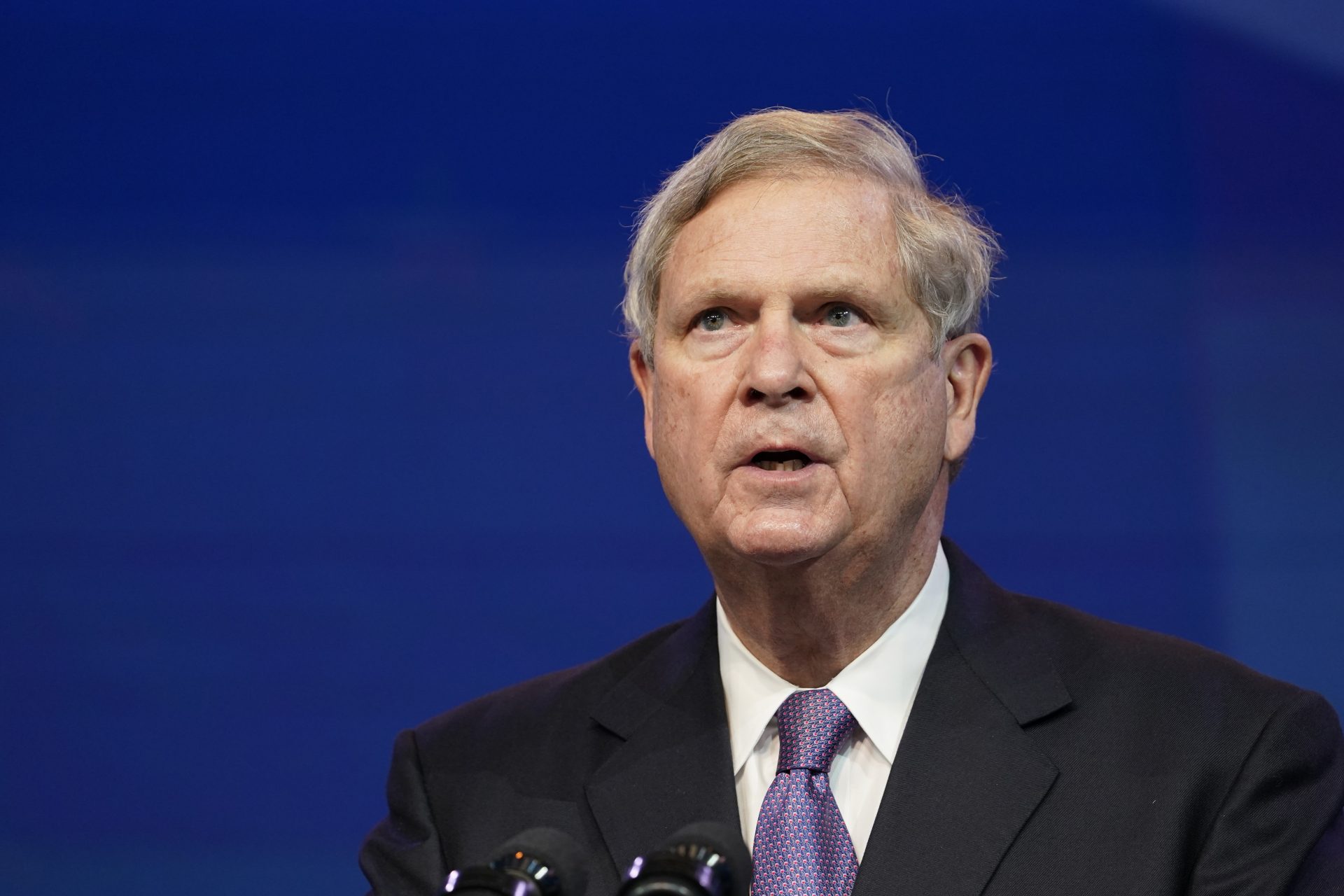 FILE PHOTO: Agriculture Secretary Tom Vilsack, speaks during an event at The Queen theater in Wilmington, Del., on Dec. 11, 2020.

The White House wants to open up the Big Meat industry

The administration is setting aside $500 million to help bankroll new meat processors to compete with the big four.

The Justice Department is also investigating alleged price-fixing in the chicken market. The No. 2 chicken processor, Pilgrim’s Pride, pleaded guilty this year to conspiring with others to limit production and keep chicken prices artificially high.

But meatpackers reject the idea that industry consolidation is hurting ranchers or consumers.

“The present spread between live cattle and beef prices has everything to do with the law of supply and demand,” says Shane Miller, group president for fresh meats at Tyson, the nation’s largest beef and chicken processor.

Miller told a Senate committee this summer that the pandemic and other shocks have forced processors to slow down their slaughtering operations, so there are fewer cattle coming in and fewer steaks going out.

“This led to an oversupply of live cattle and an undersupply of beef, all while demand for beef products is at an all-time high,” Miller said. “So it should not surprise any of us that as a result, the price for cattle fell while the price for beef rose.”

The meatpacking companies argue that in normal times, their giant size makes them more efficient and helps keep prices for consumers low.

In recent decades, that “consumer welfare” argument carried a lot of weight. Government regulators were willing to go along with one merger after another, so long as hamburger was cheap.

But a new generation of antitrust scholars — and the Biden administration — are more skeptical of supersized corporate power.

“Between these recent price shocks in the pandemic and ongoing allegations of price-fixing, that [consumer welfare] argument for consolidation is falling apart,” said Claire Kelloway, a researcher at the Open Markets Institute, an anti-monopoly think tank. “There’s increasing evidence and suspicions that this market power has gone too far and is beginning to hurt consumers.”

A ransomware attack on JBS in June that temporarily idled nearly a quarter of the company’s beef-processing capacity also highlighted the risk of having so much of the nation’s food supply in the hands of a few big companies.

Almost exactly a century ago, the federal government passed the Packers and Stockyards Act to crack down on excesses of what was then known as the “Meat Trust.”

The Biden administration is promising beefed-up enforcement of that 1921 law. And it may find fresh support from shoppers facing sticker shock at the butcher counter.