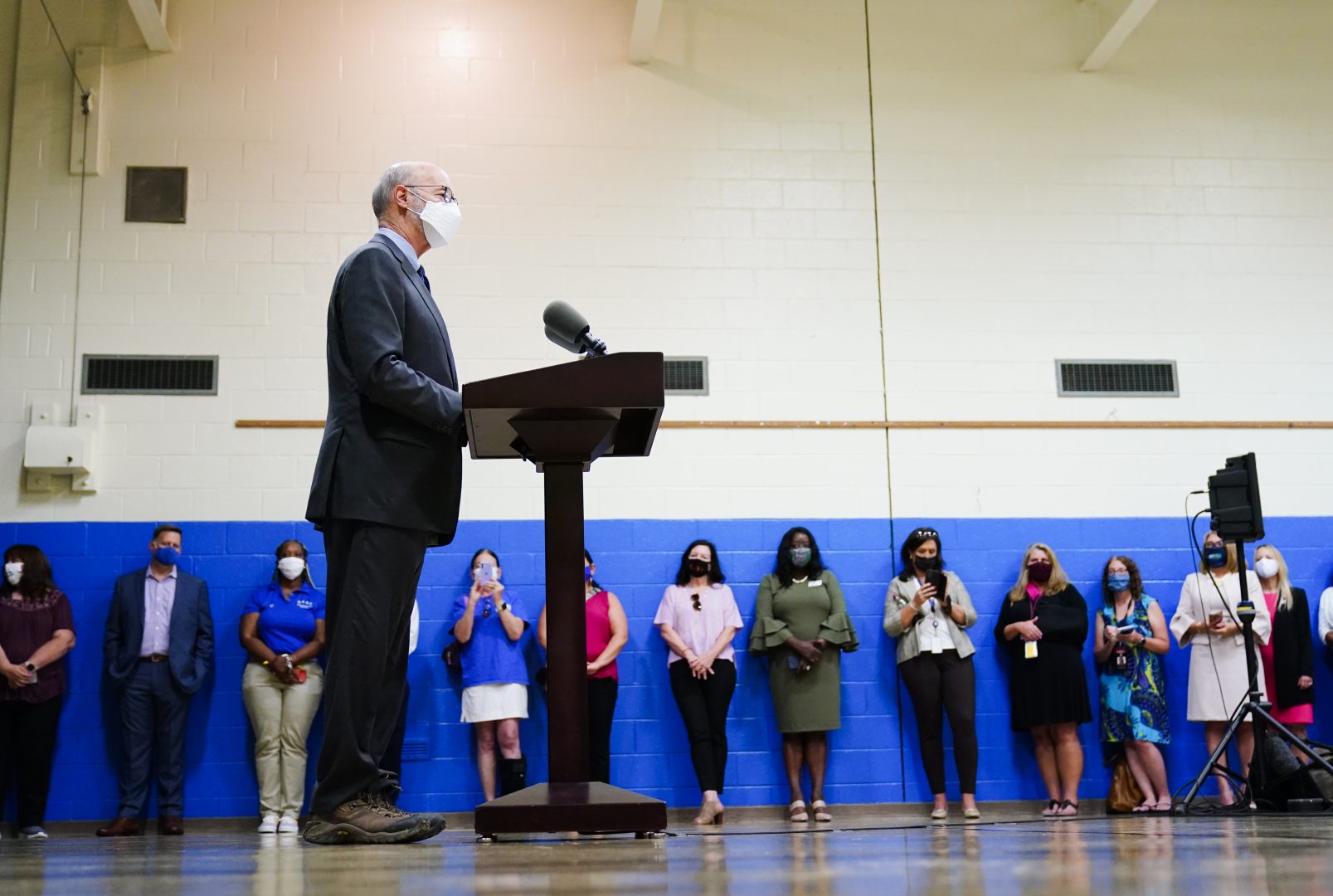 Some Pennsylvania physicians are offering stock doctor’s notes for use by parents wishing to have their children exempted from wearing masks in school, according to state health officials who say they have referred the matter for possible disciplinary action.

A statewide, universal mask mandate for Pennsylvania schools went into effect Tuesday as the Wolf administration seeks to keep school buildings open for in-person learning amid the latest surge in COVID-19 cases, hospitalizations and deaths.

The acting health secretary’s face covering order contains an exemption for students for whom wearing a mask would cause or worsen a medical condition. But parents in districts that require a doctor’s note or other medical documentation have complained it’s been difficult to find a physician who will sign off.

The Health Department said some doctors are pushing stock exemptions that are available to anyone, regardless of medical necessity. Health officials did not immediately say how many doctors have offered such notes.

“The administration is aware that some physicians have indicated that they intend to offer blanket ‘exemptions’ to individuals with whom they have no treatment relationship, and regardless of whether the individual’s physical condition required an exemption,” the Health Department said in a written statement to The Associated Press.

Those doctors, the department said, “have been and will be referred to the appropriate licensing boards for possible disciplinary action.”

The Pennsylvania Department of State, which oversees the state medical board, wouldn’t confirm the existence of an investigation or complaint related to blanket mask exemptions, but said it investigates every potential violation it becomes aware of.

In Lebanon County, Dr. Joel Yeager put a stock, four-page exemption letter on the homepage of his practice’s website. The site invited people to “print your own copy.” 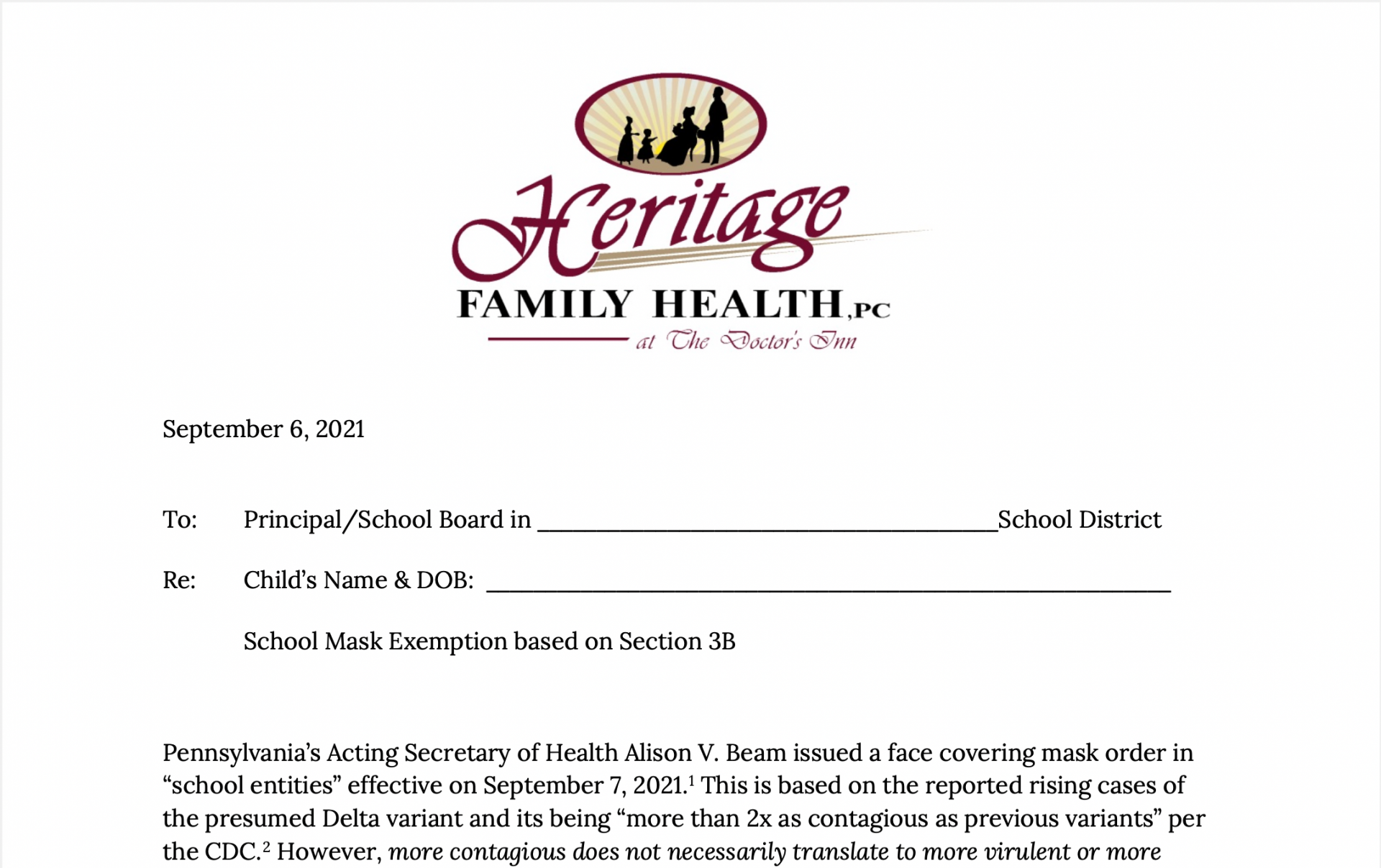 Dr. Yeager published a stock exemption form on his practice’s website. It was taken down Friday morning.

Yeager’s form letter, dated Sept. 6, claimed that wearing a mask can cause health problems, and asserted that parents “are exercising their constitutionally protected right in claiming this exception/exemption.”

The letter said Yeager’s practice had received numerous requests for an exemption from both existing patients and from people with whom he had no professional relationship.

“Unfortunately, many physicians have chosen to abandon their patients in their hour of greatest need. Many are refusing to give valid medical exemptions from masking or vaccination,” Yeager wrote.

Parents took to social media to thank Yeager for the form, and said they would submit it to their children’s schools.

One parent, from Leechburg — a small town outside Pittsburgh, some 240 miles from Yeager’s practice — wrote that her son brought Yeager’s form to school, but was turned down and then handed a mask to wear.

Tiffany Nix, the superintendent of Leechburg Area School District, confirmed Friday that she had rejected a stock exemption letter.

“They have to come directly from a doctor, not a form letter,” Nix wrote in an email. “I explained this to the parent.”

The link to Yeager’s form was removed from his website on Friday morning, and his practice’s social media post advertising the form was deleted. The Facebook post had generated hundreds of comments and was shared more than 800 times before it was taken down.

A message was left on Yeager’s cellphone seeking comment.

Yeager has been licensed to practice medicine in Pennsylvania since 2006. He has never been subject to any disciplinary actions by the State Board of Medicine.

Dr. Gerald Maloney, chief medical officer for Geisinger hospitals, said doctors should not give a note to anyone they don’t have a professional relationship with — and such notes, when provided, should be accurate.

“Exempting individuals from a public health measure without evaluating them exposes those individuals to harm and should never be accepted,” Maloney, who oversees clinical bioethics at Geisinger, said via email.

The state’s compulsory masking order has encountered significant pushback from some parents and students who assert they have the right to go unmasked at school. Several lawsuits have been filed seeking to get the mask mandate overturned, while GOP state lawmakers, who oppose Democratic Gov. Tom Wolf’s statewide approach to masking in schools and say it should remain a local decision, are planning to take up mask legislation.

At least a dozen Pennsylvania districts are allowing students to claim a medical exemption with just a parent’s signature, an approach the state Health Department rejects as out of compliance with the masking order.

“There are exceptions to the masking order, but a parent’s opposition to the order is not one of them,” the Health Department said.