County agencies and partners set up tables along the inside of the center to assist those in need.

‘We lost everything’: Montco residents flock to resource center for help recovering from Ida 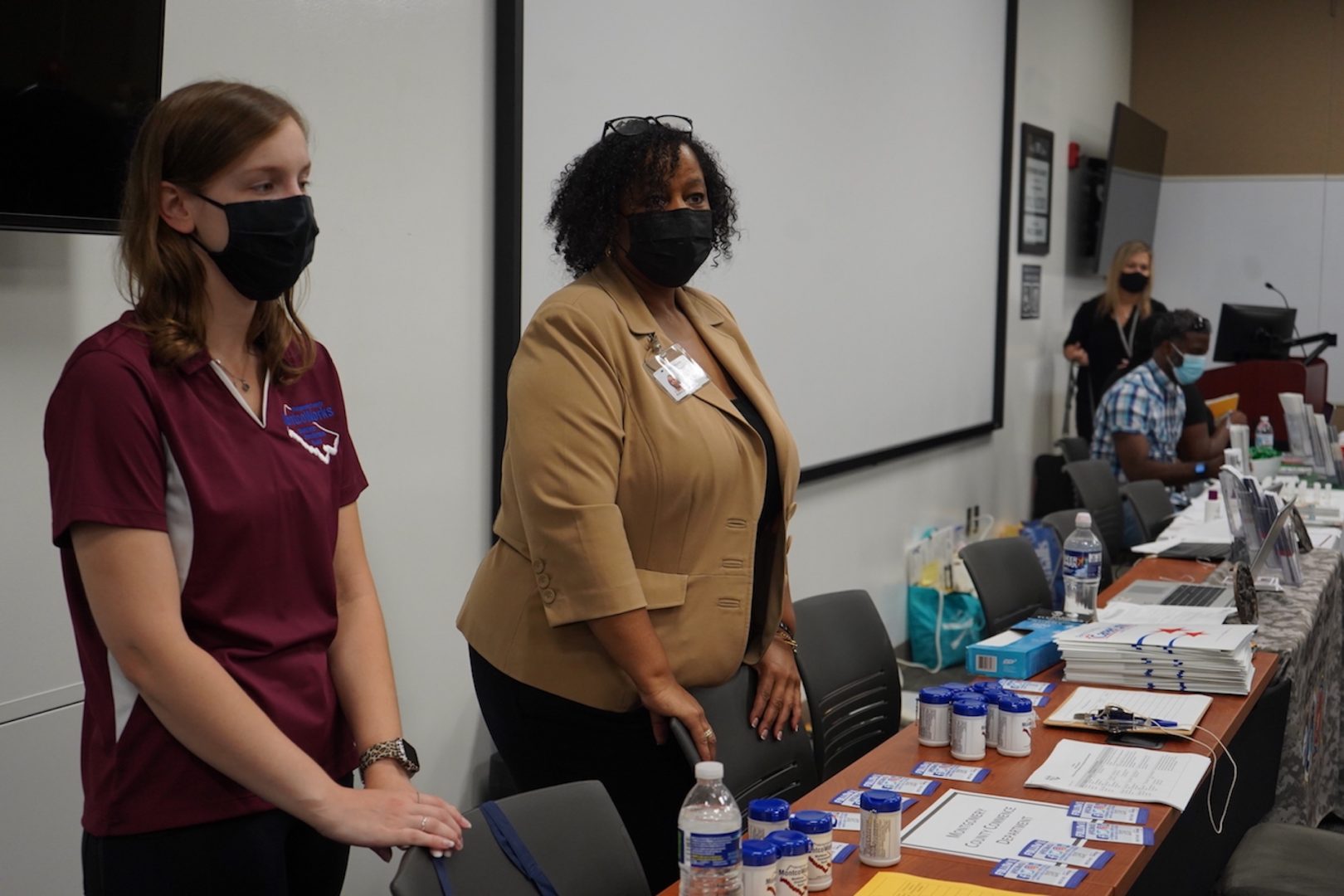 County agencies and partners set up tables along the inside of the center to assist those in need.

(Norristown) — Montgomery County debuted on Wednesday a two-day Multi-Agency Resource Center for residents whose property was damaged last week, when the remnants of Hurricane Ida pounded the region with heavy rain and fierce wind.

Ahead of the center’s noon opening at the Montgomery County Intermediate Unit’s headquarters at 2 W. Lafayette Street in Norristown, dozens of county agencies and partners, including the Red Cross, prepared for an expected crowd.

A countywide damage assessment has identified widespread harm: As of Wednesday, 46 homes were characterized as destroyed, 269 had suffered major damage, and 91 were left with minor damage. Another 41 homes were identified as “affected.”

“Almost every part of Montgomery County was impacted either by flooding or by the tornado or even just high winds,” County Commissioners Chair Val Arkoosh said. “And so it is far-reaching and involves many of our municipalities. So that is why we have an operation like this stood up, so that people from all over the county can come here and get whatever specific resources they need.” 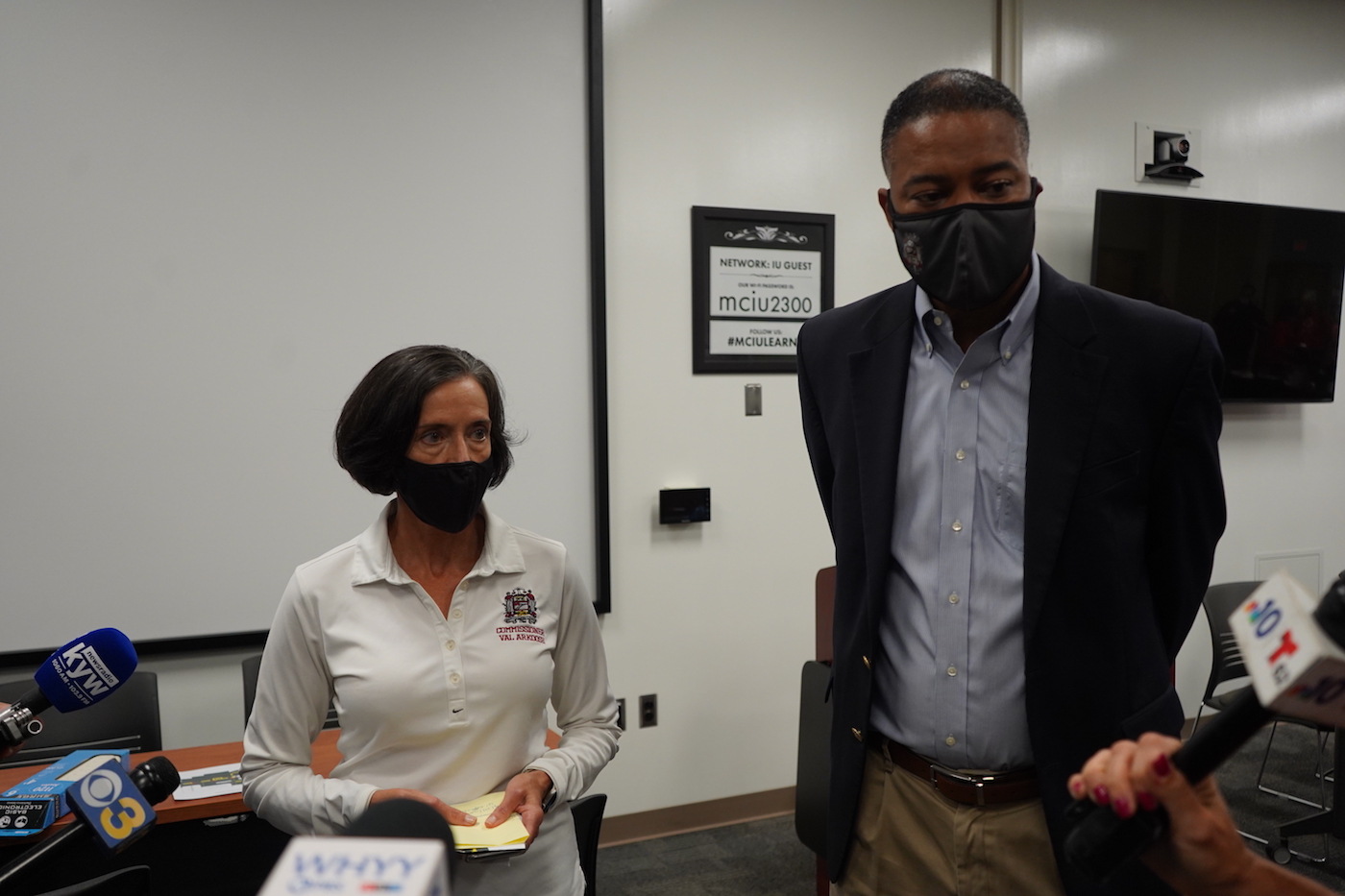 The first step toward recovery relief, Arkoosh said, is stopping by the center and meeting with the Red Cross and Montgomery County’s homelessness agency.

“We anticipate that there should be a federal disaster declaration … hopefully within the next 24 hours. And then that will release additional funding to individuals who have been displaced,” Arkoosh said.

The Norristown center was scheduled to be open only on Wednesday and from 9 a.m. to 5 p.m. Thursday, but a disaster declaration would allow for the creation of a longer-term disaster recovery center.

On entering, residents register with the county, fill out forms detailing the number of people in a given household and the extent of the damage to their home, and answer questions about their immediate needs, such as housing, food, or clothing.

After that, individuals get a number and then are escorted into a room with representatives of all the agencies offering assistance.

“The Red Cross is in the next room over, and they are helping to have people on a short term basis. And then our county agency, Your Way Home, is working to house people for the longer term for those who need it,” Arkoosh said.

Renters in Montgomery County are being advised to follow the same steps. 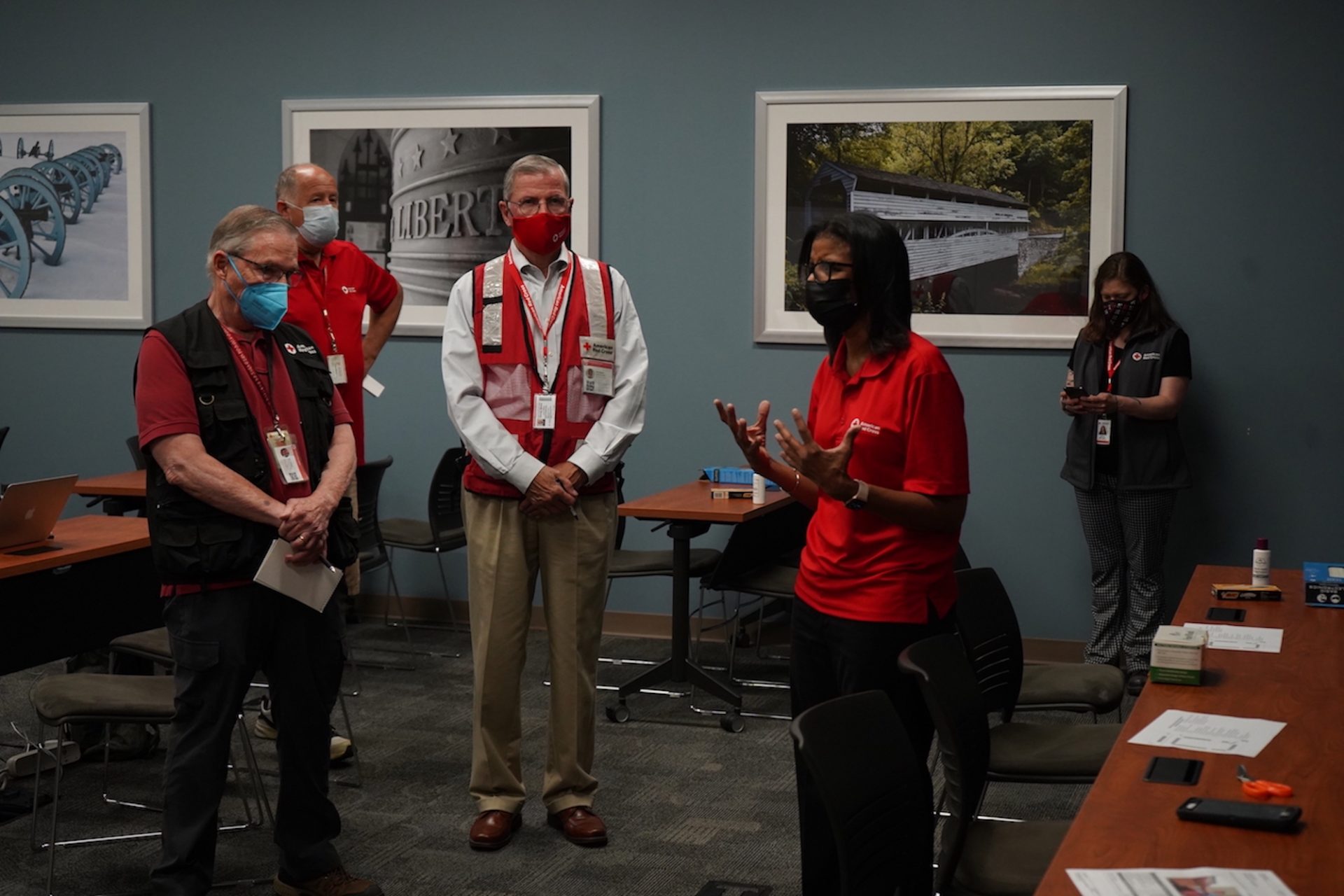 Red Cross volunteers meet ahead of the opening for a brief discussion on the plan.

“Landlords also should be making sure that they are putting in for their damages as well, so that we know the rental buildings and facilities that are impacted. And also the shelter for people who have an immediate need is still open at the Norristown Area High School,” County Commissioners Vice Chair Ken Lawrence said.

Before the center’s doors opened, a Red Cross representative highlighted for volunteers the need to identify community members having a tough time dealing emotionally with their losses as a result of the storm.

Outside, the line swelled to more than 100 people, many with no place to go because of the damage wrought by Ida’s devastating rain and wind. 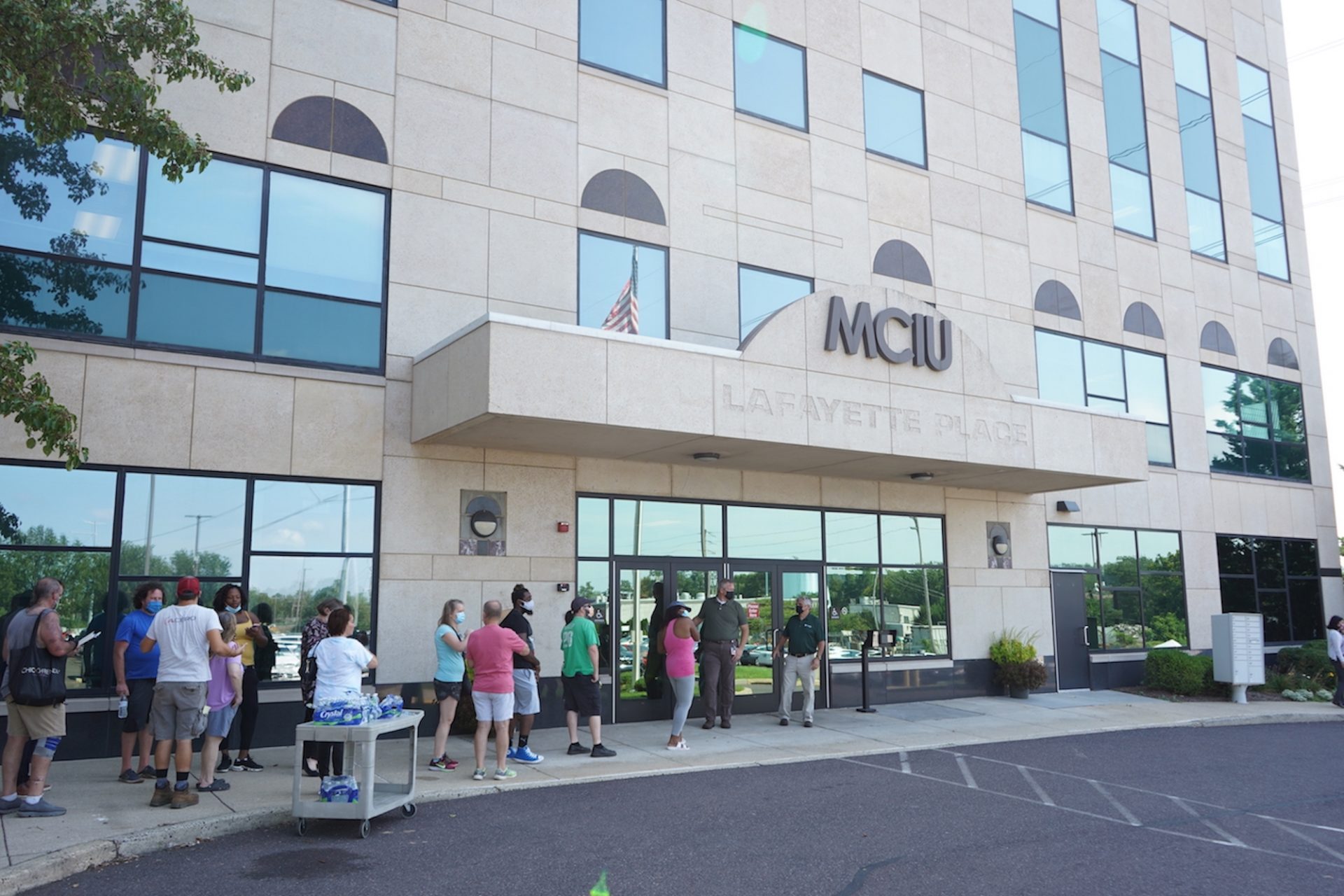 Justin Stoeckle, 40, lived in Bridgeport until he was flooded out.

Now, he said, his back is against the wall.

“I’m a single, disabled father of two kids. I have a hotel stay for two weeks. And after that, I don’t know what I’m going to do. So I mean, you know, right now everything is up in the air,” Stoeckle said.

He said he and his neighbors were either notified too late or not at all by local officials as the floodwaters rushed into their homes. Justin Stoeckle lost everything when the floods overtook his home in Bridgeport. He had to swim out of his home with his two sons. (Kenny Cooper / WHYY)

On top of that, Stoeckle said, his car was towed and he’s being charged for the tow fees.

Melissa Spiron, 43, said she lost her belongings after the flooding in Bridgeport overwhelmed her basement and her first floor.

Her biggest need is figuring out how to pick up all the pieces, she said.

“We own the house, I don’t rent. We can’t leave. How are we going to make it through?” Spiron said.

According to Commissioner Lawrence, 75 families in Bridgeport are currently displaced. Representatives from Bridgeport and other hard-hit towns, such as Upper Dublin, Lower Providence, and Norristown, were on hand at the center to meet with affected residents. 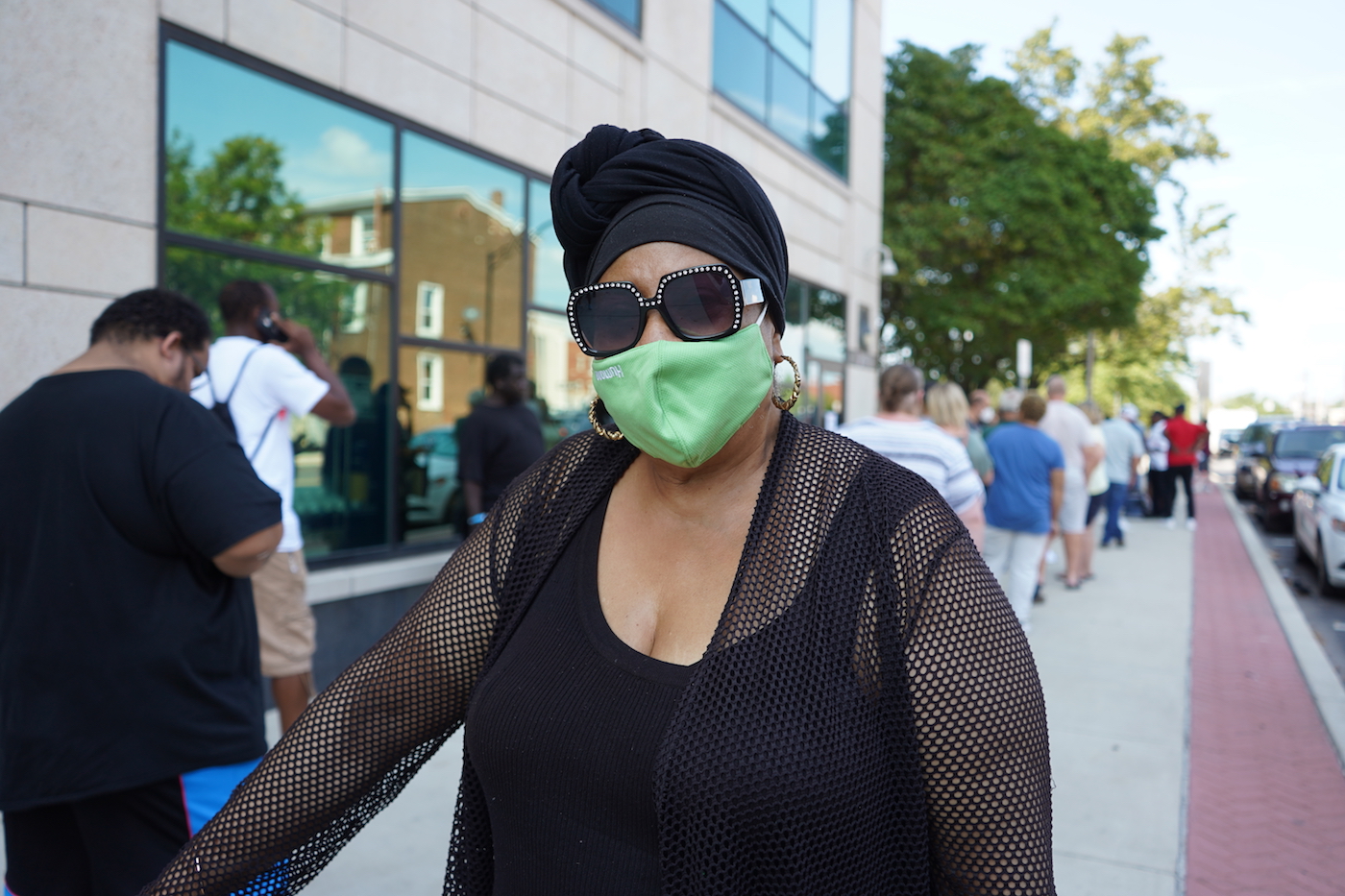 Brenda Poole wonders why an apartment complex was allowed to be built so close to the river. (Kenny Cooper / WHYY)

Brenda Poole, 72, of Norristown, has nowhere to stay since the apartment she shared with her son was deemed uninhabitable because of water damage. Located off Schuylkill Avenue, the apartment complex was right in the flood zone.

Though she said she’s run into some issues with the Red Cross, Poole complimented her apartment managers.

“I think the complex is willing to give us all our money back. I’m glad about that so that we can find another place,” Poole said.

But the big question on her mind is: Where will she be able to find a place on such short notice? 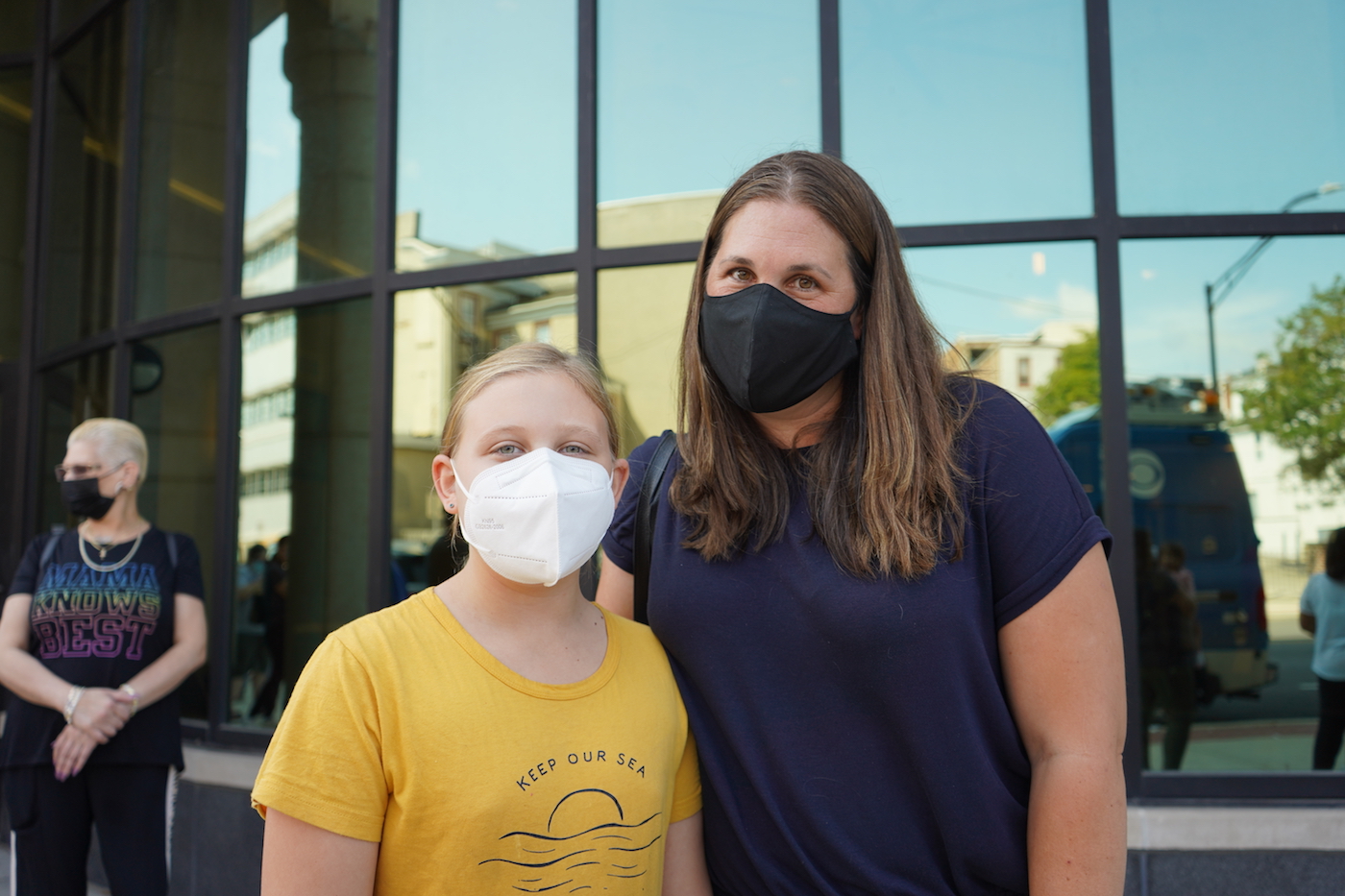 Lillian (L) and Jessica Perkins (R) just moved into the area about a month ago. Their home was completely flooded — washing away precious photos and memories. (Kenny Cooper / WHYY)

Jessica Perkins, 37, of Colmar, moved into the area just a month ago. She hadn’t made her first mortgage payment yet, and she was away when the storm hit.

“I never imagined walking into what I walked into. And even from the outside, it was, you know, it wasn’t ravaged by your tornado. So it looked like it was still standing. It wasn’t until I opened the door and I physically couldn’t even open the door, because everything had just kind of floated, I guess around,” Perkins said.

She had 6 feet of water in the garage, and the whole house was flooded. Perkins said she is grateful she and her family weren’t there when it happened.

Luckily, she said, they have flood insurance that covered some of the damage. However, they didn’t have contents insurance.

Her 10-year-old daughter Lillian said the water got a hold of some things she’d had since she was younger and some picture books — precious memories.

“Everything in our garage is ruined. We have to throw everything in there out,” Lillian said.

Though Perkins said this storm was hard to anticipate, the infrastructure would have been unprepared either way.

“We just don’t have a good water infrastructure right now. Especially with global warming happening, I think that these kinds of things are really going to be happening more and more,” Perkins said. The Neshaminy Creek near her home was overwhelmed by Ida’s torrential rains.

Without access to a stove and refrigerator, Perkins was seeking housing and food security assistance at the center Wednesday.

Though most of the people standing in line needed help, WHYY News talked to a Norristown man who was there to find volunteer opportunities to help his neighbors. 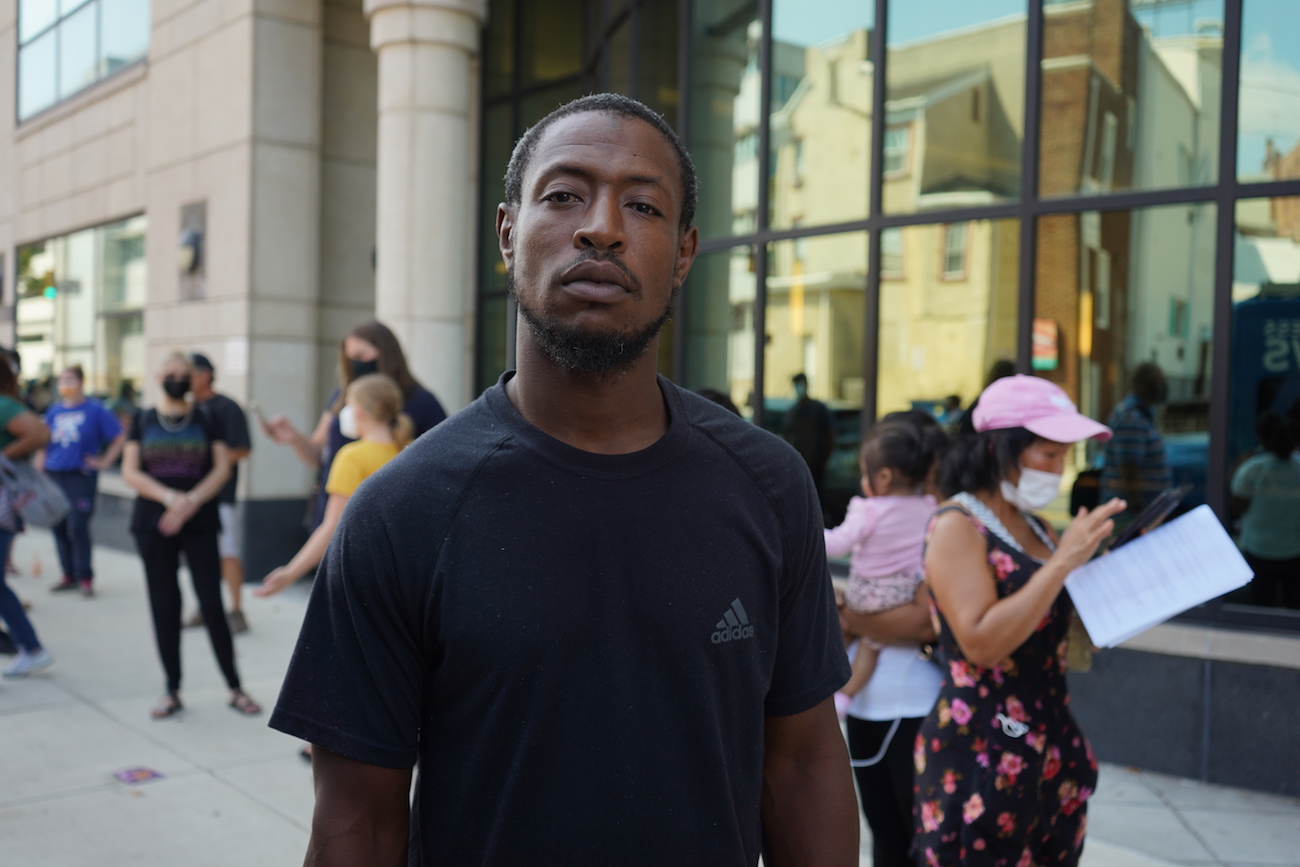 George Wise III didn’t have any property damage. He came to the resource center to find ways to help. (Kenny Cooper / WHYY)

“I wasn’t really impacted. Actually, the community was impacted, so I tried to help out as much as I could, direct people to something because I’m familiar with the area,” George Wise III, 35, said.

Talking with people in the community, Wise thinks the biggest needs are compensation and repairs.

“People have homes. They have furniture that has been damaged — thousands of dollars of furniture. We have recreational parks here that’s been damaged. Ten feet of water … So the kids go to play there. This is for the community,” Wise said.

With so many people having lost so much, county Recorder of Deeds Jeanne Sorg was providing certified copies of deeds at the center free to affected homeowners.

Spanish-language translators were on hand at the center, to offer better access to available assistance.

Arkoosh noted that more rain was in the forecast for Wednesday night.

“So if those tornado sirens go off, people need to heed them. Go to safety,” she said.